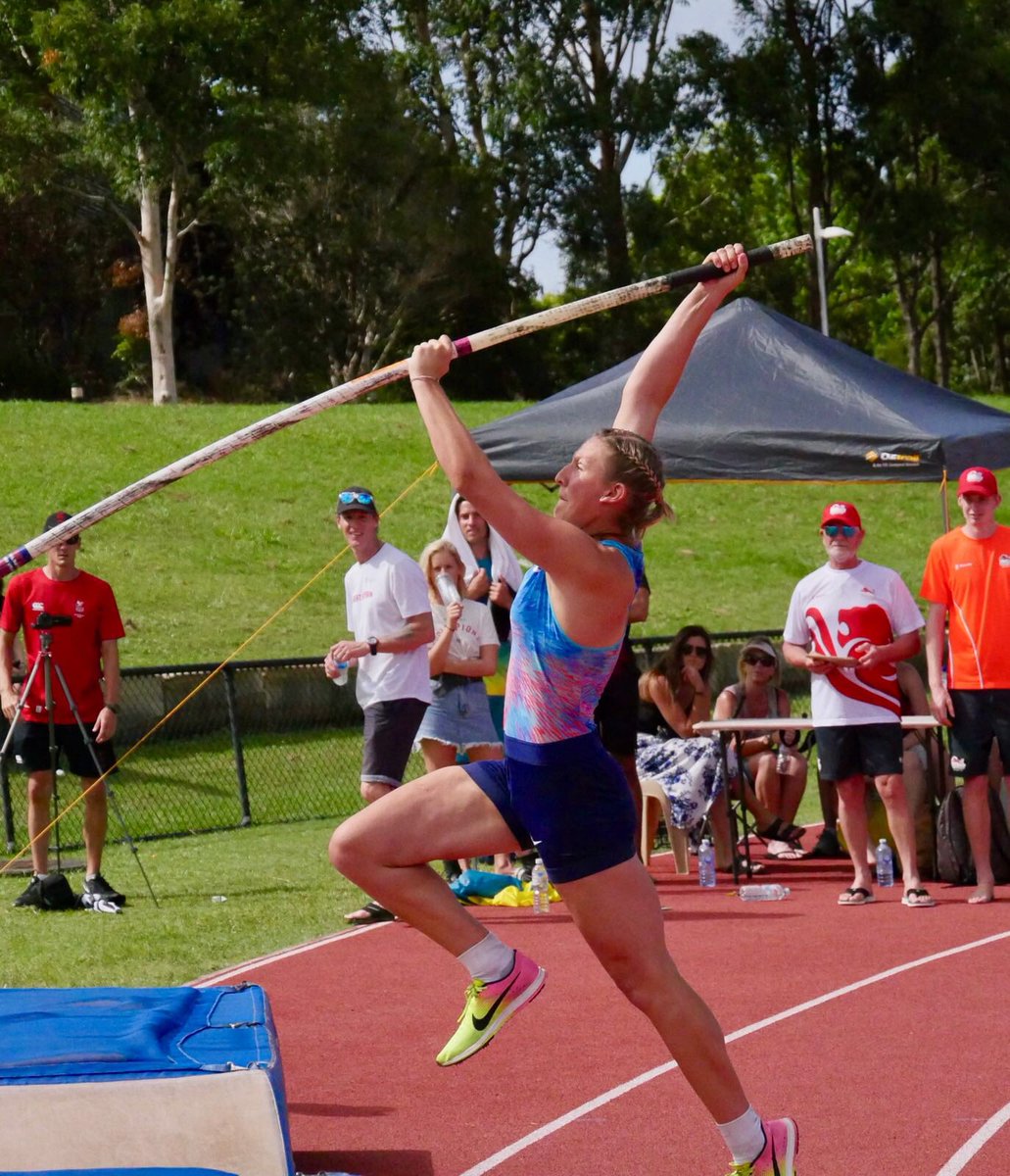 Blackburn Harriers – Holly Bradshaw and Sophie Hitchon had good wins as they prepared to compete for GB in the Commonwealth Games being hosted on the Gold Coast in Queensland, Australia beginning on April 4th.

Holly competed at the International Invitation Meet in Sippy Downs on Saturday March 31st and came away with a win clearing 4.70m, whilst Sophie was in the US competing in the Stanford International on the same weekend, also coming away with a winning throw of 71.41m. Holly spoke to the Club about her competition telling us that “It’s great to be back competing after the small injury that kept me from competing indoors. Training has been going great and I’ve been building confidence here in Australia with my pole vaulting. The competition was great fun and another progression towards full fitness. To jump 4.70 in my first competition was awesome but a bit unexpected. I still have a few weeks now to move closer to where I want to be for the commonwealth games but the main thing is that I am enjoying myself and loving being back jumping”. 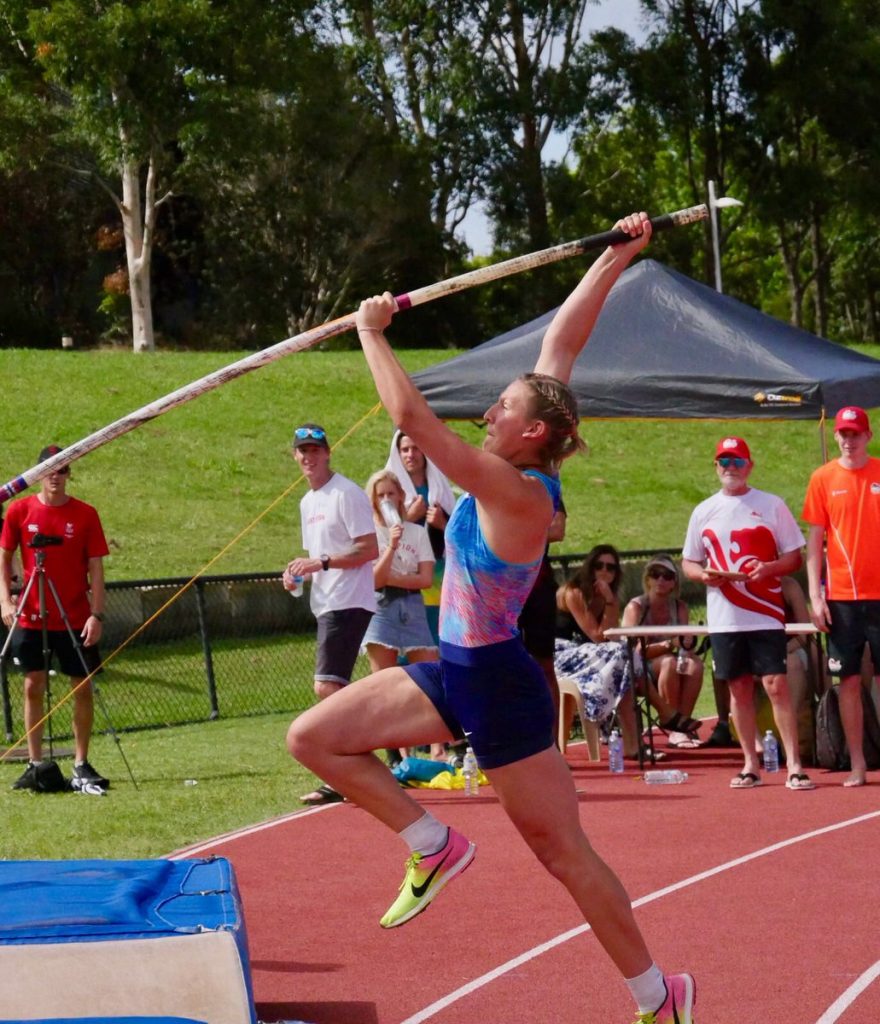 Tim Raynes celebrated Easter in style as he won the Ackworth Half-Marathon in a time of 70.39 some six minutes in front of the second placed runner. Given the weather – cold and windy along with rain – this was an excellent run by Tim as he recorded a new personal best by close to nine minutes in only his second ever attempt at the distance.

After the Race, a delighted Tim spoke to the Club commenting that he “been thinking about maybe targeting a HM in the Autumn, so wanted to get a rough idea where I was at by having a run at one before the summer. Already having a number of races planned though, it was tricky to find a HM to do that would fit in. I ended up deciding to run the Ackworth Half over in West Yorkshire. Having only ever ran one HM before (just before I joined Harriers), I wasn’t quite sure what to expect. As the race set off, I started to open up a lead and I ended up running on my own until the finish. I knew the course was fairly undulating and so just tried to maintain a consistent effort without getting too worried about time. In the end, fairly pleased with my run (can’t complain about a 9 min PB), which I will hopefully look to build on in the Autumn. Not the most local, but would recommend the race. Fantastic organisation in pretty grim conditions.” 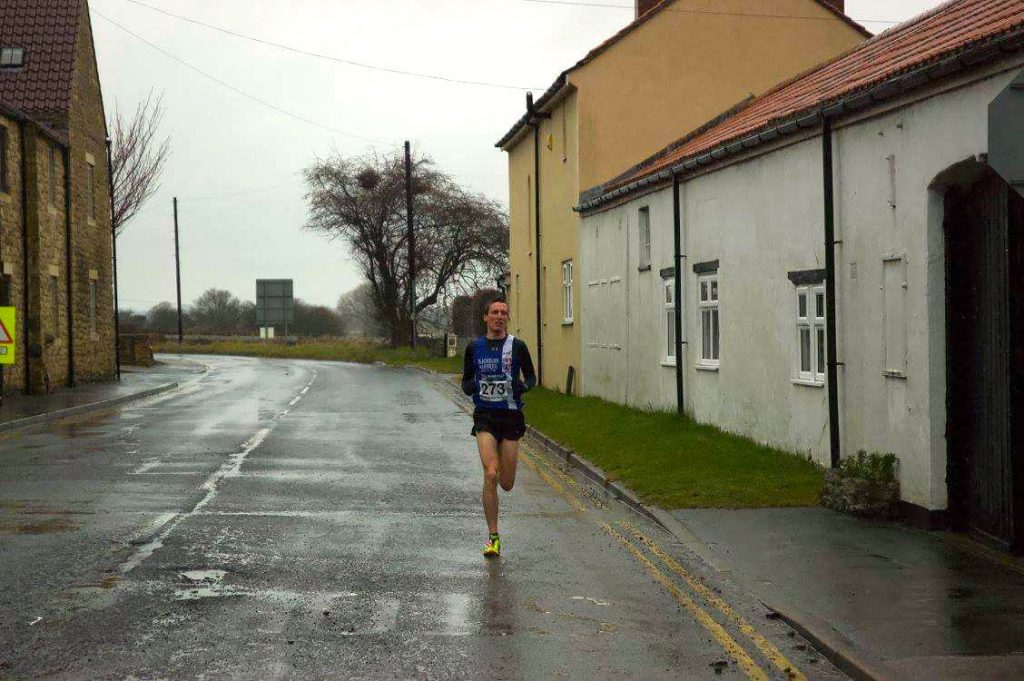 U13 Niamh Gater had a very good day setting a new PB in the 75m as she finished 3rd in Heat 3, clocking 11.96 to chop four tenths off her previous best. Onto the 150m, a distance she hadn’t previously run and another good performance, placing 3rd in Heat 3 in a time of 24.07 before going on to record her second new PB of the day as she leapt to 3.29m in the Long Jump – over 20 cms further than she had previously jumped. Isaac Butler (U13) who has had a great cross country season was keen to get a time for 1500m under his belt before going off on holiday at his first time over the distance. His race featured 16 runners – 14 of them U15’s – as he finished 11th in a good debut time of 4.59.16. There is no doubt that there is much more to come as he managed to go slightly awry with his pacing, going through the first 400m in 68 seconds!! A good day too for U15 Nicky Saunders as she took on Shot Putt, Discus and Javelin. In the Discus she placed 7th with a throw of 6.86m before coming in 2nd in the Discus recording a throw of 24.16m. Her best result of the day was a new PB in the Javelin as she placed 2nd with 24.81m – over a metre further than she has thrown before.

Running in the Antipodes

The Knowles family are In Australia at the moment and enjoying themselves as they get ready to watch the Commonwealth Games and in particular – Blackburn Harriers athletes Sophie Hitchon in the Hammer and Holly Bradshaw in the Pole Vault. Whilst down there, they took the opportunity to run a local race described by Andrew as  the “Knowles family “Down Under”…..The Wildhorse Criterium is a trail race with distances form 11k to 12 hour Ultra, Andrew ran the former finishing in 10th place in 57.28, reporting he was quite worried about some waste deep river crossings and the creatures in there. The temperature was very debilitating over the last few k. Eva ran the junior 1.5k and finished 3rd overall and got rewarded with chocolate!” 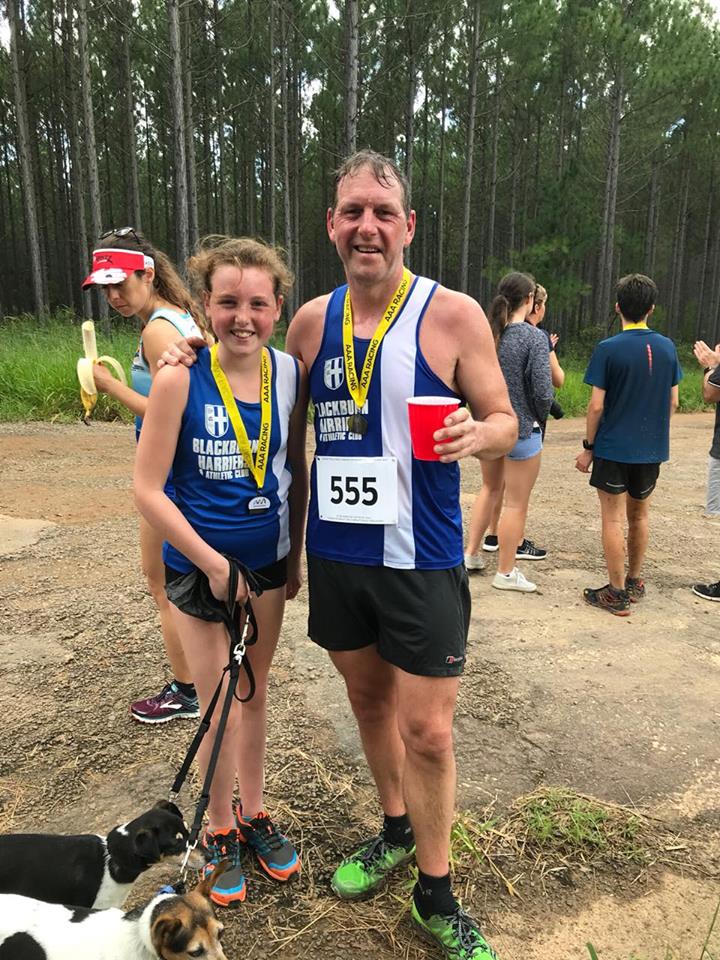 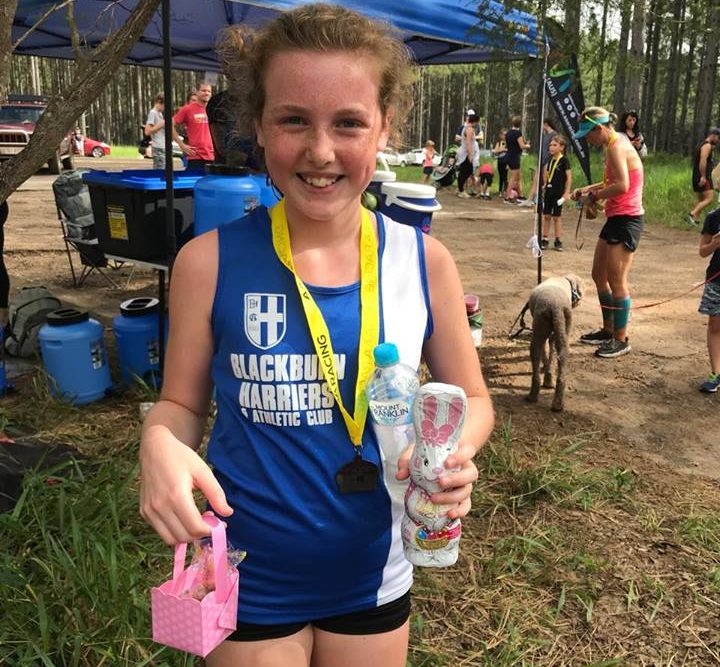 A very cold day didn’t stop three hundred and fifty four runners tackle this traditional Easter weekend Race which was  won by Nick Swinsburn (17.43) from Michael Cayton in 2nd (17.54) and Dan Haworth in 3rd place in a time of 18.26.

Just one Blackburn Harrier in the main Race – Paul Wilkinson who placed 226th clocking a time of 30.57. Young Libby Neal had a go at the Junior Race earlier in the day and enjoyed it as can be seen with the expression in her face!! 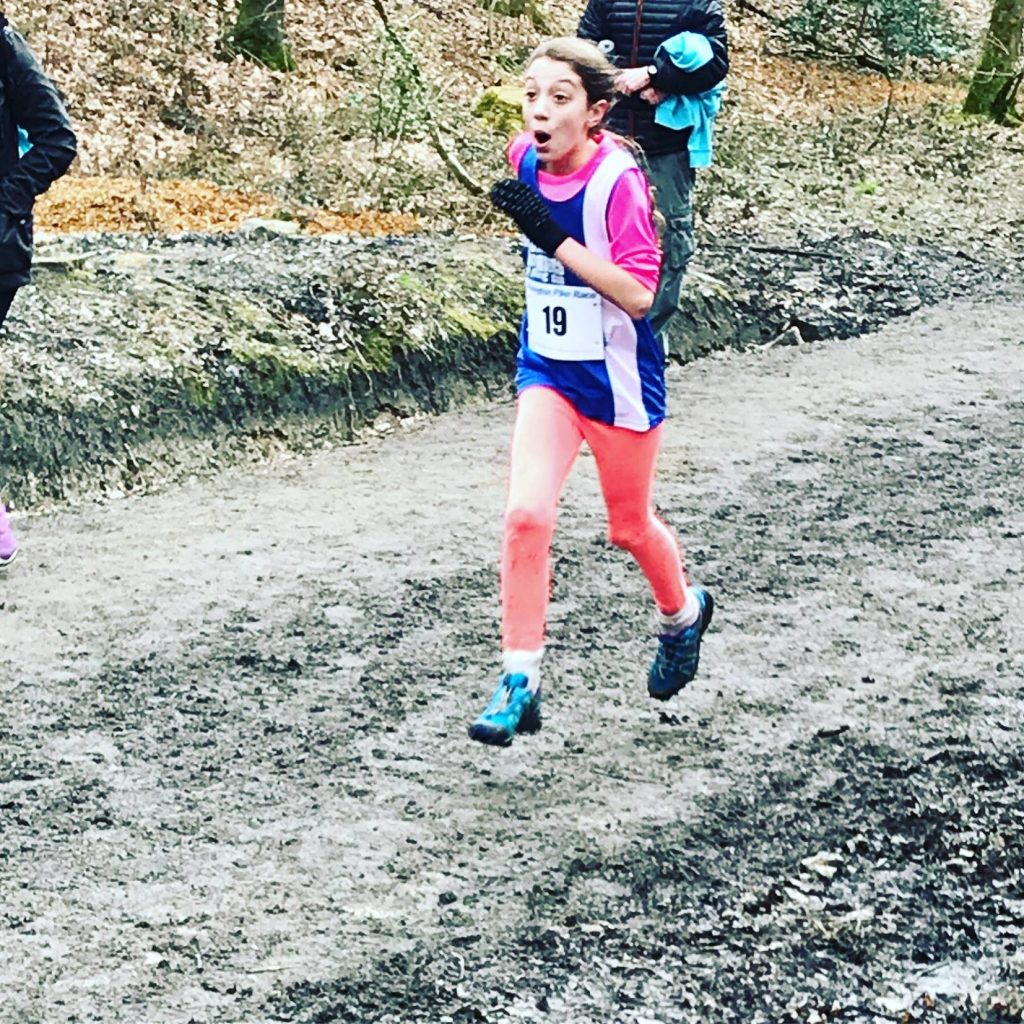