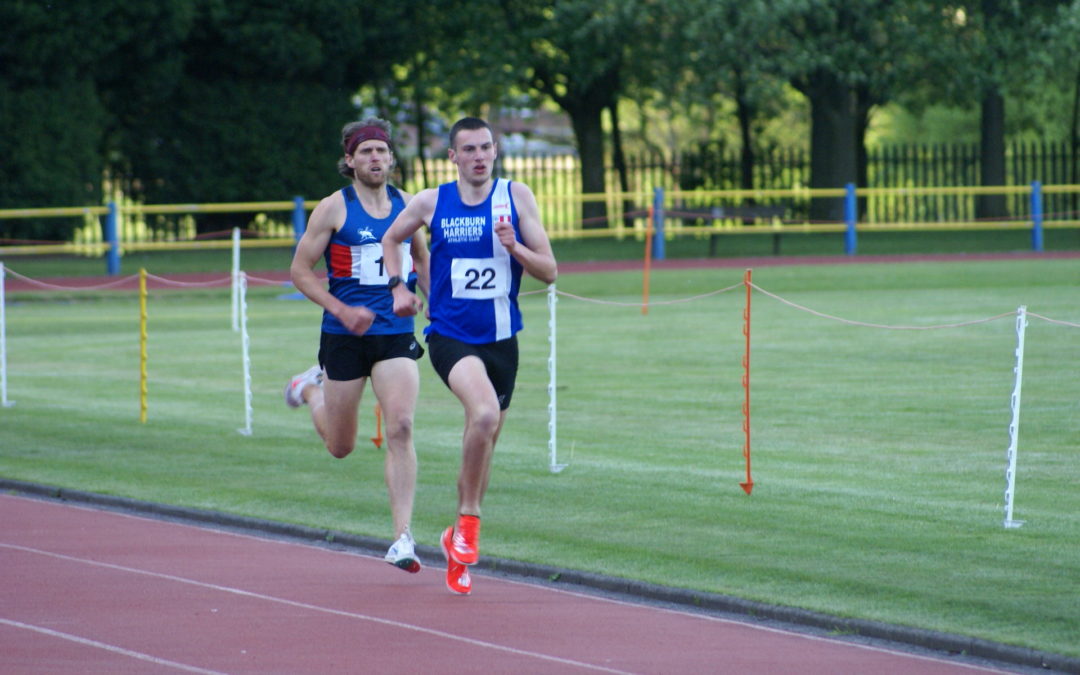 First race of the night, was as is customary, the 3000m featuring four Heats. Four Blackburn Harriers entered with U20 Matt Ramsden in Heat 1, Mark Magee and Marc Hartley in Heat 2 and Ryan Bradshaw in Heat 3.

Heat 1 had 15 athletes contesting the race including three U20 & three U23’s among the Seniors. Matt Ramsden went into the race in good shape and looking to improve on his personal best of 8.43.51 and that is exactly what he did. Cardiff’s Nathan Jones made all the running as he powered into a long lead early on, a move which he paid for in the end as David Devine (Liverpool) and Jacob Cann(Horsham Blue Star) caught him to finish 1st and 2nd respectively with Jones placing 3rd. Matt had tracked Liverpool’s Alistair Rutherford up until 500m out and then he went for it, moving into 4th place with a decisive move and finishing with a really powerful final 120m to chop a full ten seconds off his previous best time for a new PB of 8.33.55. 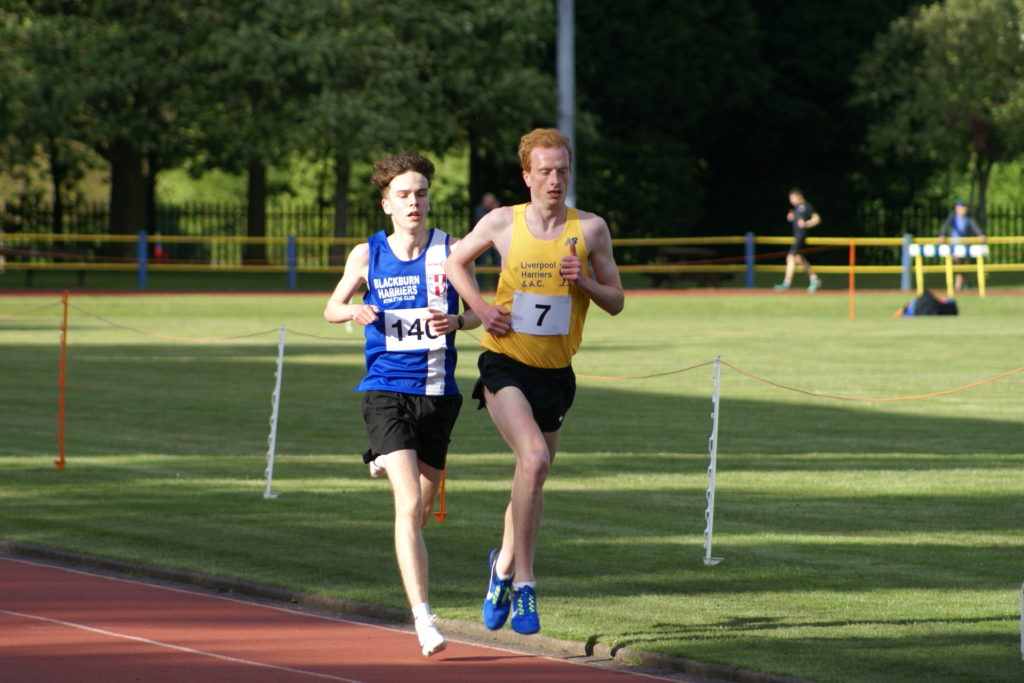 Heat 2 had seventeen athletes lining up with Mark Magee and Marc Hartley for the Harriers. Mark Magee is relatively new to track racing having only had half a dozen races previously and was looking to set a new personal best on the night. Marc Hartley had a personal best from 2013 of 8.29.64 and was looking to have a solid race – and both athletes achieved their goals. During the race, Mark and Marc went to the front to try and drive it on which worked well for them. Mark smashed his personal best by half a minute to set a new PB of 9.03.24 in 4th place whilst Marc Hartley clocked a solid time of 9.10.62 in 8th spot. 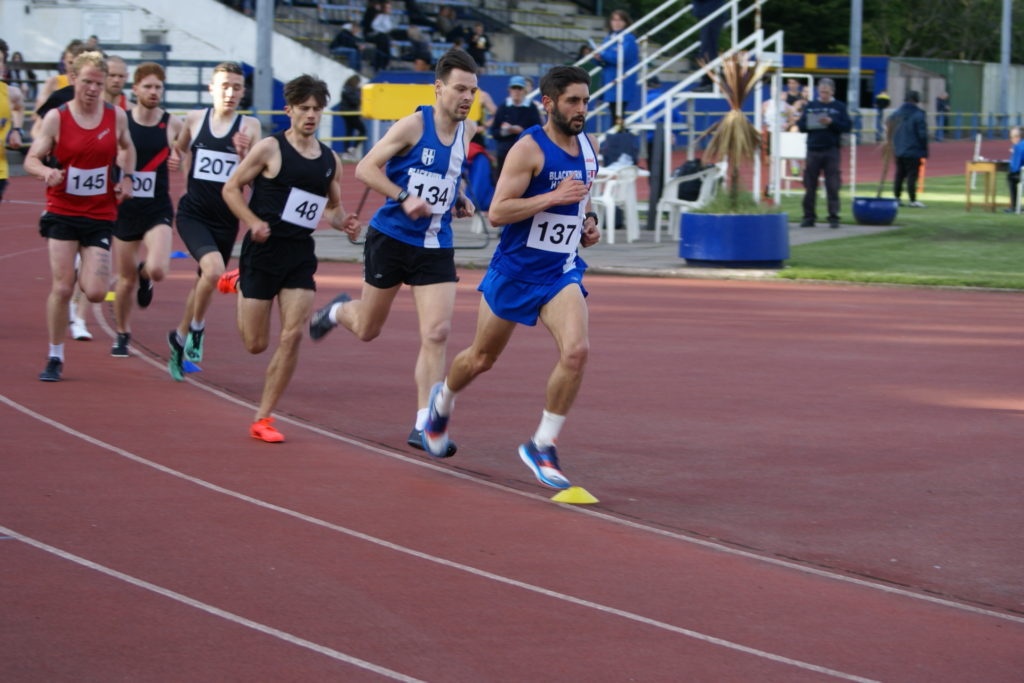 Ryan Bradshaw went in Heat 3 which had a field of sixteen, his personal best being 10.16.0. Ryan was racing in a Track race for the first time since June 2019 and his first time on the Track in a Blackburn vest. He absolutely battered his time by 50 seconds as he finished strongly through the last 400m, coming home in a new PB time of 9.25.38 in 4th. 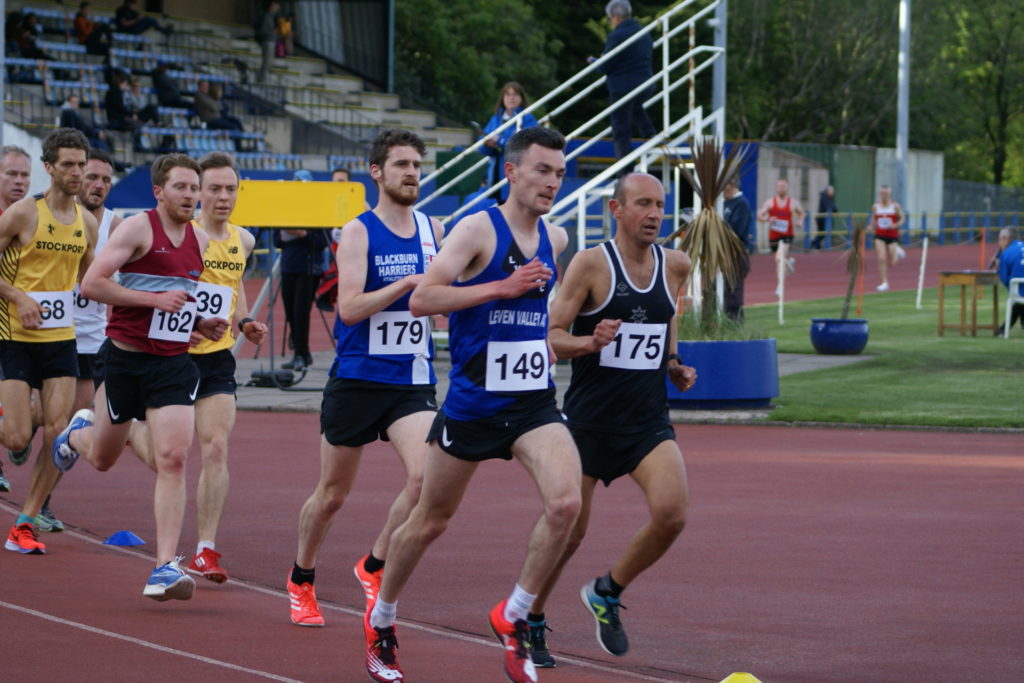 On to the 1500m where Callum Davidson, was running only his second race on the track in a Blackburn vest – his first being an impressive 5000m time of 14.39.06 at the BMC on May 8th. Callum is in very good shape and was looking forward to the race, however he had Andy Benson from Preston (3.51.46) and Border’s Nathan Gray (3.57.87) alongside him. Callum’s personal best time was set way back in 2015 (4.19.20) and being in very good shape, it was clear that he was going to make inroads into that time. He settled in behind Gray and Benson until, approaching the final lap bell, it was down to Callum and Andy Benson. At the bell, Callum took off and ran a blistering last 400m to win the race by over six seconds, smashing his previous best and setting a new PB of 3.54.75. 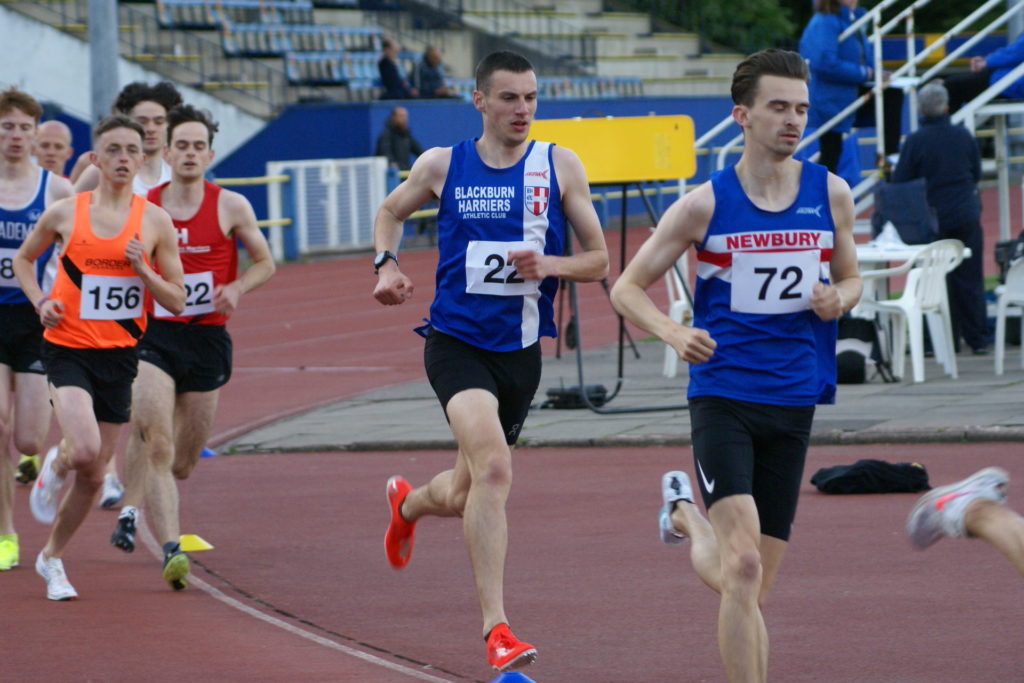 U17’s David Holman and Hayden Mercer were the next Harriers racing over 1500m – David going into the race with a PB of 4.26.20 and Hayden 4.30.12. David and Newcastle (Staffs) athlete Elliot Smith made the early running with Smith taking the lead. David  bided his time and ran an excellent final 400m, drawing ever further away from Elliot Smith as he crossed the line in first place, smashing his personal best by nearly twelve seconds and with a winning margin of well over four seconds to set a new PB of 4.14.35. Hayden battled it out with Liverpool’s Harry Sweeney as he placed 5th overall, running a strong and determined last lap to chop another huge five seconds off his time to set a new PB of 4.25.19. 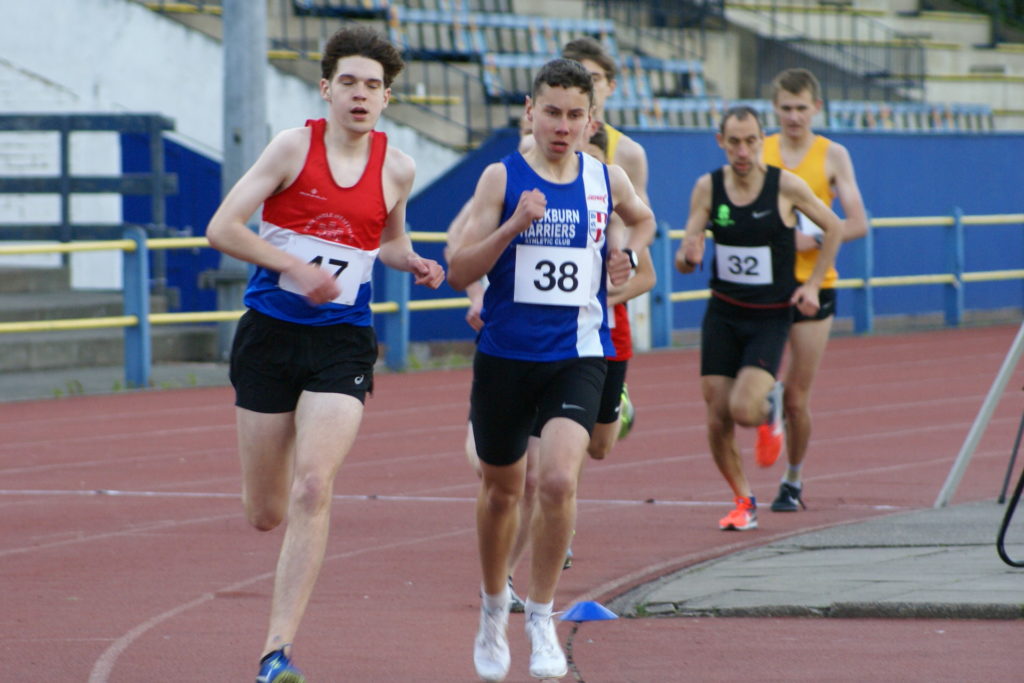 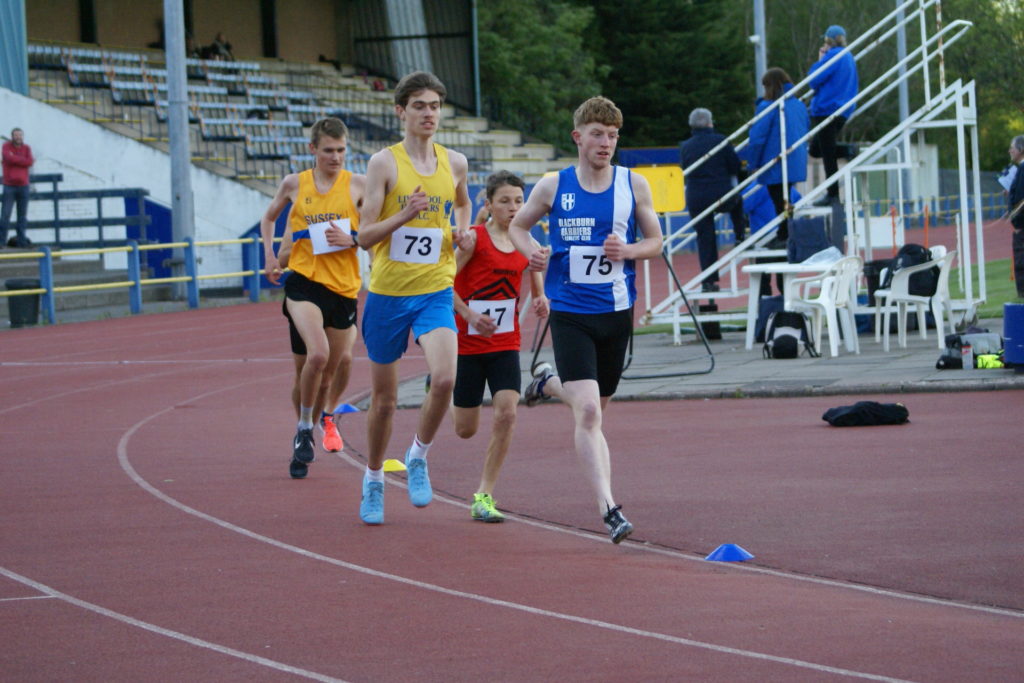 U17 Codie Dewhurst and U20 Harry Wilkin ran in the next 1500m Heat which was comprehensively won by St Helen’s athlete Michael Brussels (U20) in a time of 4.23.42. In races like this, where one athlete is so dominant, you just have to settle down and concentrate on running your own race and trying to beat the rest of the field. This is exactly what the two lads did with Codie setting his second new personal best in a couple of weeks, the first one over 800m and this one now in the 1500m as he ran strongly the whole way to place 2nd in 4.36.31 and grab himself a new PB by seven seconds. Harry did the same as he battled down the home straight with another Newcastle (Staffs) athlete – U23 Rebecca Twardochleb – to finish in a new PB time by four and half seconds of 4.41.24 in 5th position. 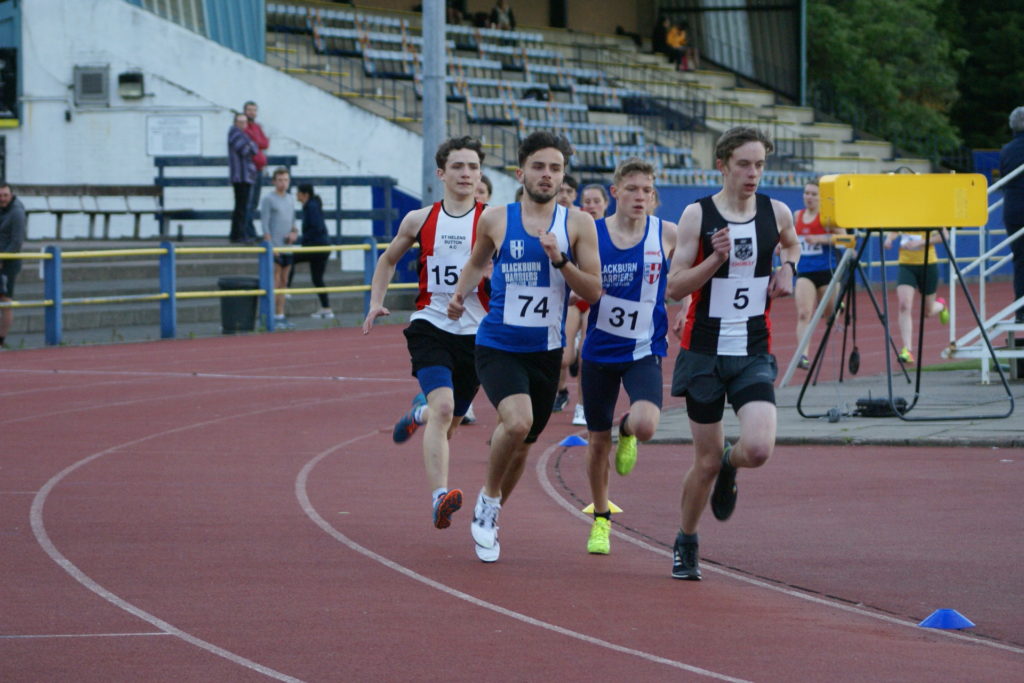 Bottom of age U17 Jack Paget-Fowler ran in the penultimate 1500m race and what a race it turned out to be, probaly the best of the night in terms of the drama at the end. Jack went in having only ever raced once over the distance, clocking 4.50.64. at Trafford on the 24th April. He won that race by front running it and that is exactly what he did this time – straight from the gun, into the lead, giving it everything he had for as long as could. The tactic seemed to have worked until 150m out when Jack was reeled in and the race in the home straight was enthralling – an example of how a race can capture the imagination, even when the fastest times aren’t being run. With line fast approaching, half a dozen athletes were all in with a shout of winning. In the end Chorley’s Ben Wilson and Jack crossed the line together and given the same time of 4.43.94 which was a near seven second new PB for Jack – Ben Wilson getting the nod over Jack. The closeness  of the race can be seen in the following times of 3d, 4th, 5th and 6th positions – 4.44.76 – 4.44.83 – 4.45.44 – 4.45.51. 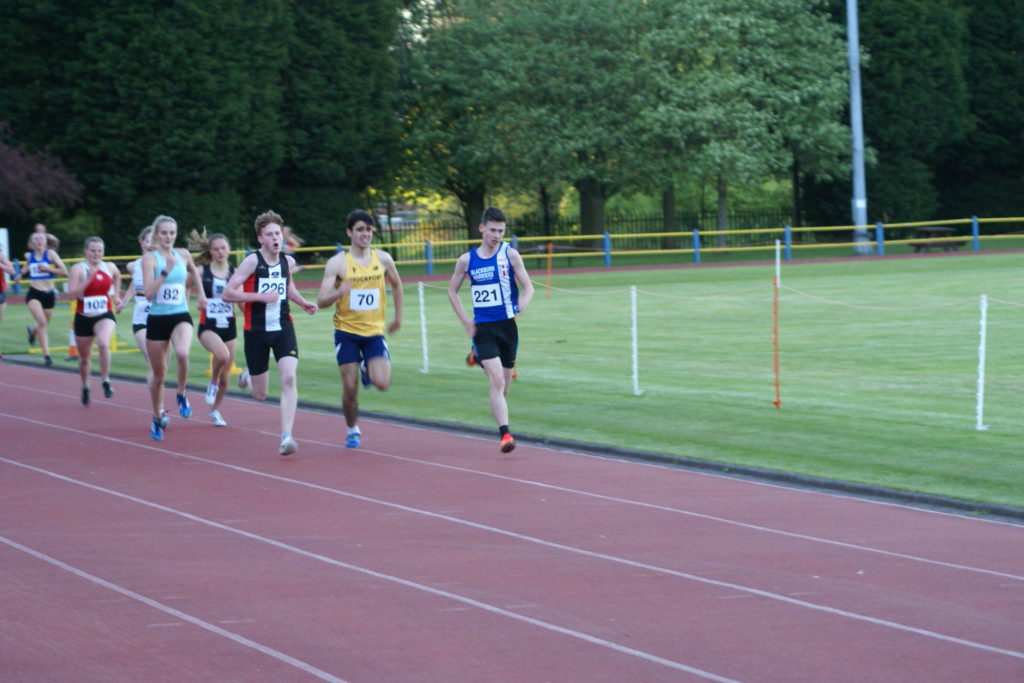 The final 1500m Race had bottom of age U17 Isabel Holt lining up among the twelve athletes on the start line. Isabel is in her first season with Blackburn Harriers and her first ever season on the Track. Going into the Race, Isabel was the second fastest athlete in the field with the Race winner Liverpool’s Faye O’Hare the fastest and it seems difficult to understand sometimes why an athlete with a personal best time better than every athlete but one in the previous Heat, was graded the way she was. Isabel lived up to the form book as she took 2nd place in the race with a time of 5.03.21 which represented a very solid run for her. 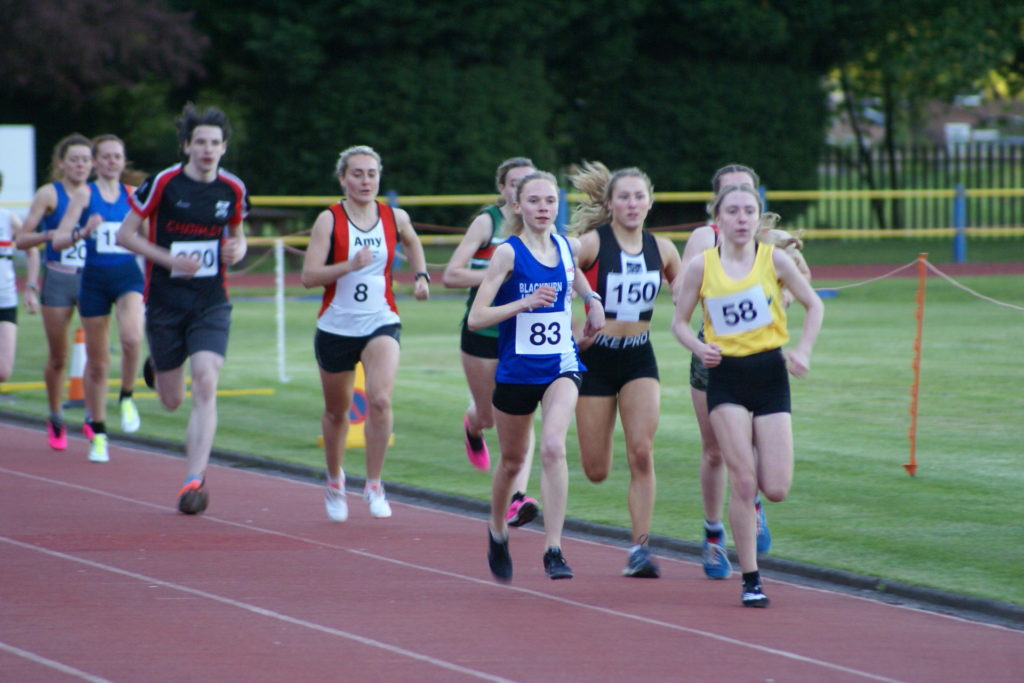 In the 800m we had two athletes running  – U20 Ben Makin and U17 Abigail Stratton. Ben’s 800m best time was his only time as he had only run the distance once before, clocking 2.04.91 at Trafford in August 2020. Every athlete in the Race went in with a time ranging from four to six seconds faster than Ben. However, that made little difference to Ben as he went for it from the off, taking the first lap in around 57 seconds and maintaining the lead all the way to chop seven seconds off his previous best, setting a new PB of 1.57.68 as he won from Preston’s Alex Kerfoot in 2nd (1.58.35). Abigail went into the Race with her best time of 2.22.12, again set at Trafford in August 2020. The vagaries of the grading system meant that she was in a field were every single athlete was considerably faster than Abigail, but that didn’t prevent her from finishing 3rd in the race, clocking a time of 2.17.77 and a new PB by well over four seconds. 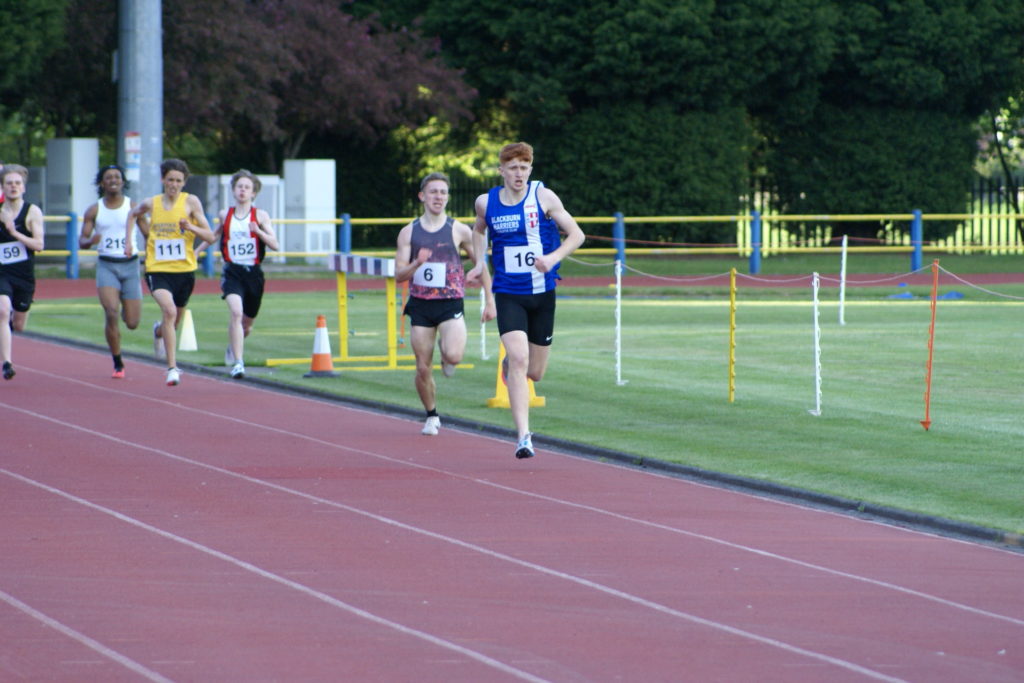 Paul Bradshaw was having his first race outing since posting 17.03 in 3rd spot at the Podium 5k (Barrowford) in March 2020 – one year and two months ago. Paul was out in one of Matt Wood’s Runthrough organised races, the 10k at the Birmingham Running Festival which also had a 5k and Half Marathon on the same day. Just a tad outside six minute miling, Paul came home in 17th place with a time of 37.41.

At the weekend, bottom of age U20 Hammer Thrower – Matthew Heywood – went over to Leigh for the Open Throws Meeting where he placed 2nd with a distance of 46.92m – a pretty solid performance given that he had to miss training the previous week going into the competition.