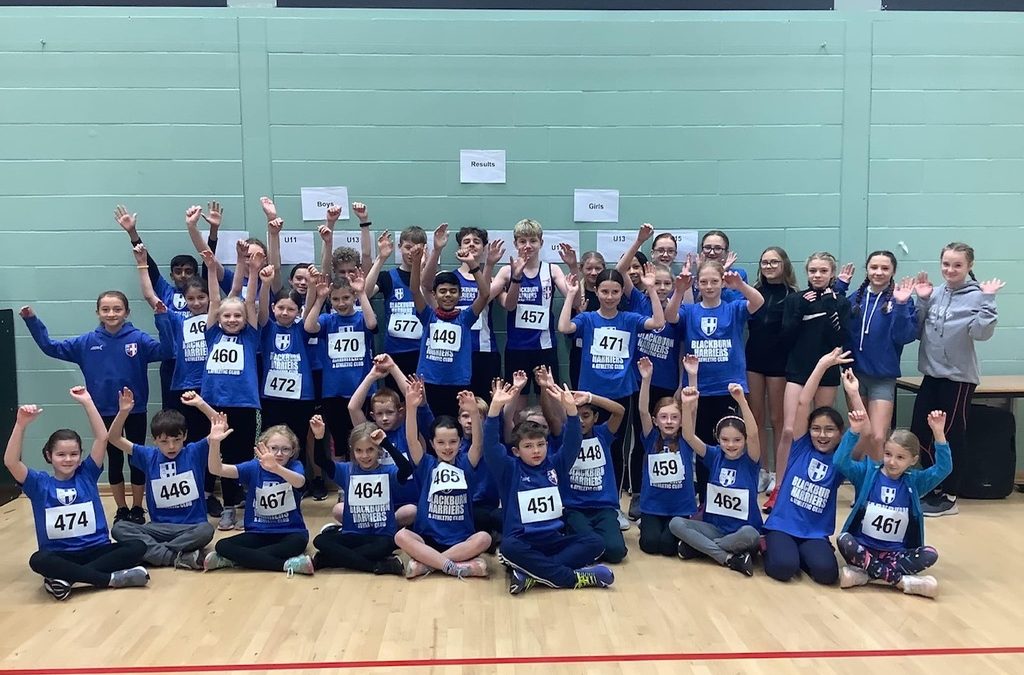 What a fabulous sight to see all those youngsters, some of them at their first ever competition, some waiting with anticipation for the opportunity to show what they can do and some who had experience in competiton before the restrictions that we have all had to contend with to keep us safe from the impact of the pandemic. A big thank you to all the Officials, Coaches and volunteers who gave up their time, not just yesterday, but in the weeks and months prior, putting together the organisation, without which, none of this would be able to happen.

Imagine – no competition, no smiling faces, no cheering and shouting for your team mates, no enjoyment, no thrills and spills as youngsters battle to win points for themselves and their team, no pride of achievement, of improvement, or just simply having a go. All of this becomes possible – only – because people give up their time to become coaches, officials and adminstrators, voluntarily and unpaid. They are the lifeblood of our sport and without them, we wouldn’t have our sport. There is nothing more rewarding than giving of yourself and your time to others. How many of these youngsters carrying on to become Junior and Senior athletes, is in part, down to the ability for them to access guidance, support, training, coaching and opportunity to compete at the various levels as they make their own journey in athletics. Without those dedicated unpaid volunteers at the grass roots of our sport, none of those circumstances would be available to them. That is what we help to try and deliver – opportunity and a chance to grow, improve and succeed. In the Clubs where much of all this takes place, the foundations are built by those volunteers – come and join them – it’s a great place to be. 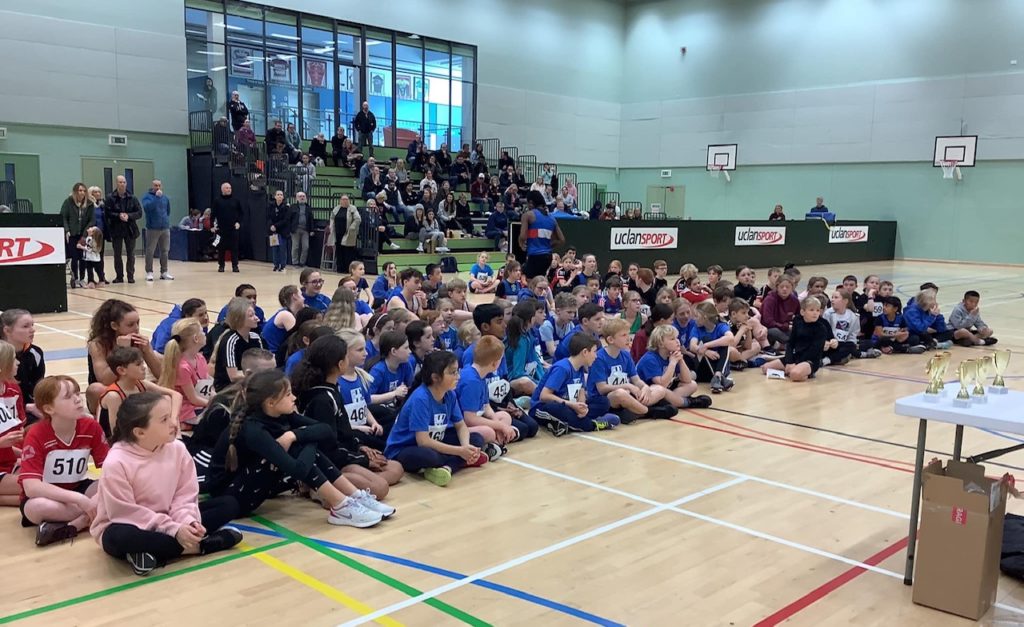 Sportshall Coach Phil Craven outlined the success of the Harriers Team on the day as he commented later “After a year away from competition,  Lancashire Sportshall League held its first fixture on Sunday. Greatly anticipated by athletes and parents alike, it did not disappoint. With athlete numbers approaching 150, it promised to be a busy and eventful meeting. With thanks to the organisers, coaches, officials and parent helpers everything ran smoothly and a fun day was had by all.

Incorporating an U9s for the first time, this is where Blackburn Harriers kicked off with some impressive performances. Fastest time for the girls 1 lap race went to Hannah Moore, with 3 of the first 4 all being from Blackburn. 1st place in high stepper also went to Blackburn, with Ava Shannon taking the win in front of fellow club members making up the top 5. Further victories in balance test, by Sophie Douglas, and vertical jump, from Tabitha Eccles highlighted the strong team effort from our U9 Girls, further proved by 2nd, 3rd and 4th place overall for the day from Hannah Moore, Ava Shannon and Tabitha Ecccles respectively. Also earning valuable team points through the day were Amelia Pacelli, Ellie Walker and Shahad Almitwally. The U9 boys backed up the girls with a victory in vertical jump from Elliot Butler, topping off a fine performance which saw him take 2nd place overall on the day, closely followed by teammate Isaac Doolan in 3rd. Again, the strong team ethic was aided by further points accumulated by Liam Duxbury, Oscar Helme and Thomas Perkis.
On to the U11s, which saw fine 2nd and 3rd place overall from Imogan Boardman and Isabelle Pawson. Imogen’s points total being boosted with victory in vertical jump and joint fastest time for the 1lap race. Further victories for  Blackburn came in long jump, for Emily Short, and High Stepper from Martyna Szuta. Numerous team points were collected by Alessia Rawcliffe, Emma Bargh, Isabella Brannigan, Ellen Hoyle and Enya McDonald. The strength of the girls U11 team was evident in a superb team victory in the relay race. Again the boys proved to be a great team, working hard picking up points through the day were Zakariya Haq, Ansh Nama, Anay Nama, Reggie Johnson.
The U13s saw not let up in the effort of all our athletes.  The boys had just 2 entries from the club, with great performances throughout the day from Jack Duxbury and Harry Pilkington; Harry proving to be a great team member despite there being none of his favoured throws events on this occasion. The girls team of Hannah Davies, Agatha Taylor, Leila Pilkington, Leah Smith, Holly Moore, Leah Walker and Megan Purkis further added to the clubs accumulation of points, resulting in a 3rd overall finish for Hannah Davies.
A strong show from the clubs U15s saw the boys take 2nd to 5th overall places on the day from Daniel Nuttall, Harrison Allcock, Jacob Fisher and Aiden Downes. With Daniel taking victory in Long Jump and Harrison the victor in SpeedBounce. The girls followed suit with Kara Dacosta ranking 2nd overall. Ably supported by Millee Schofield, Isabella Pacelli, Maimuna Muinos and Isabelle Hartley. Both boys and girls being comfortable victors in the team relays”.
The future looks bright for Blackburn Harriers! 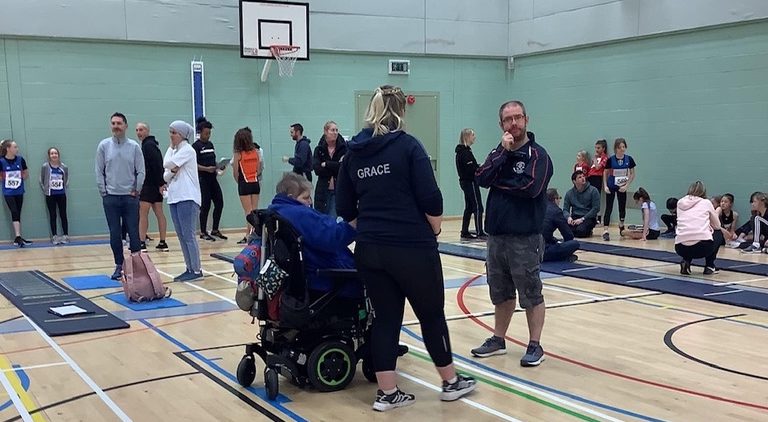 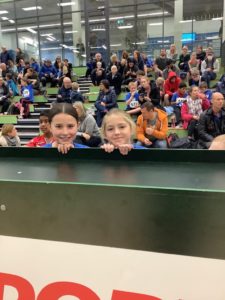 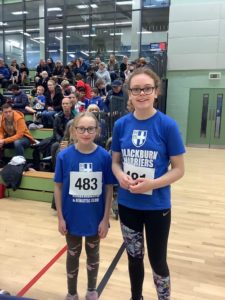 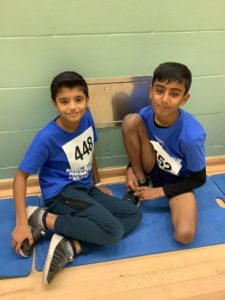 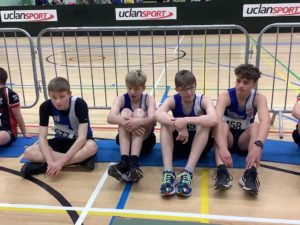 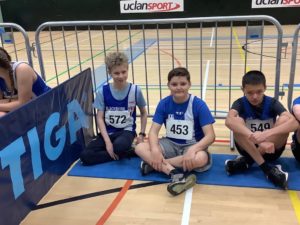 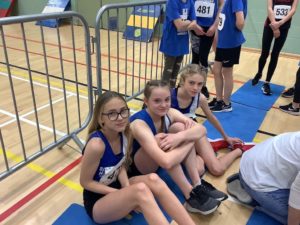 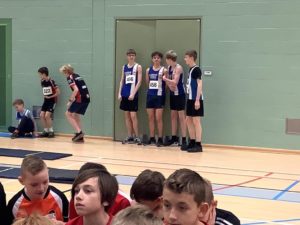 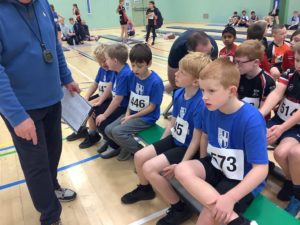 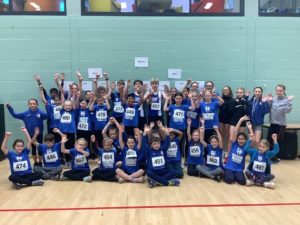 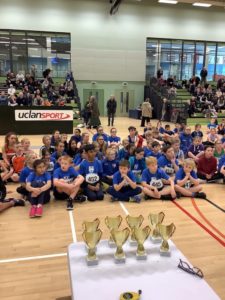 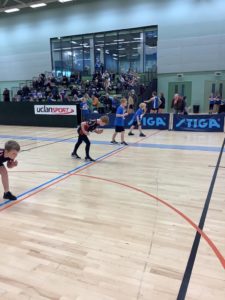 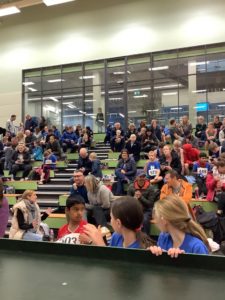 This is a Category AL Fell Race run over a distance of 27km / 16.8m incorporating a climb of 1473m / 4833ft. John Horrocks took on the race and had a really good run to place 18th overall. After the Race, John spoke to the Club commenting that it is “Probably one of the toughest fell races in the local area at 17 miles and 4800 ft of climbing. Slight change to this years course from CP1 to CP2 as we had to follow the Stan Bradshaw route which I think made it slightly quicker. Had a good run today and felt strong all of the way round coming in 18th in a time of 2hrs 43mins. Thanks for the support out on course to a few of the fellow harriers that came out to watch”. 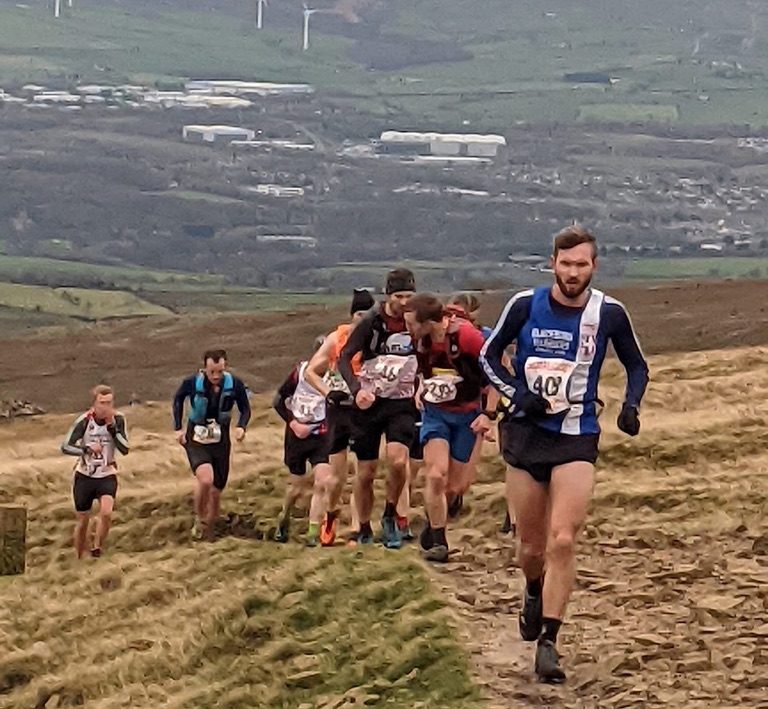 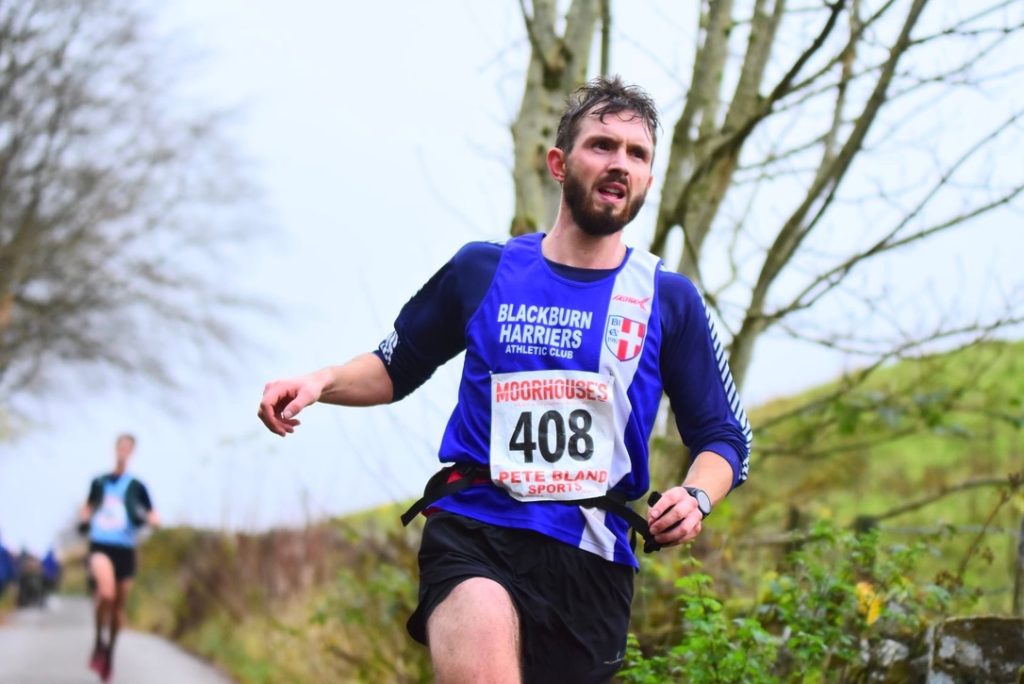 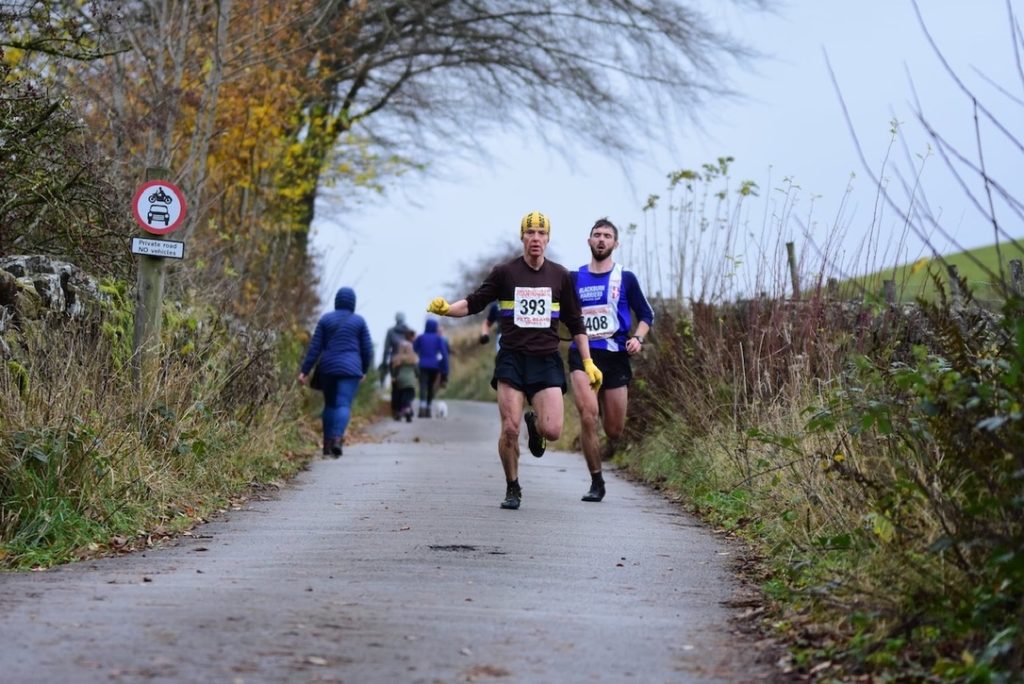 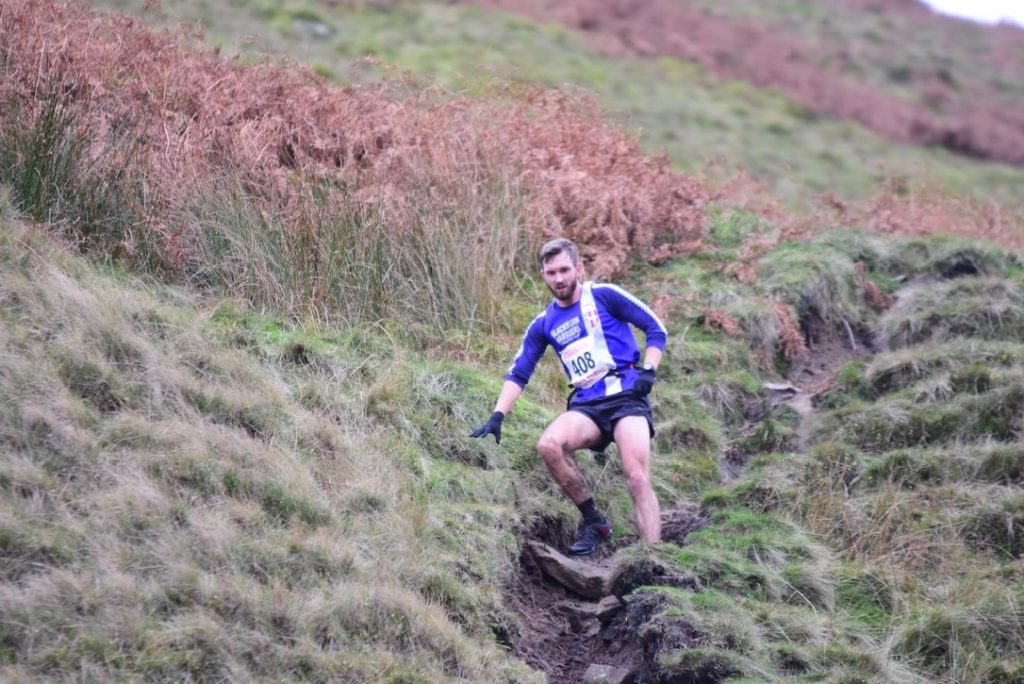 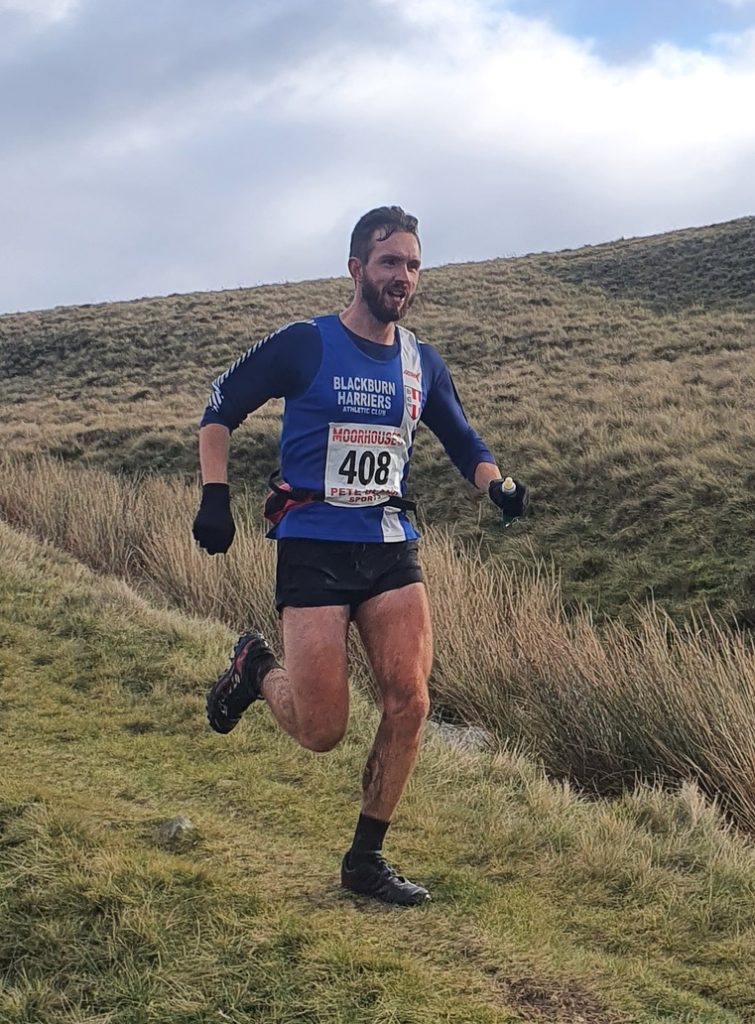 Still on the Fells, this time at the Arnside Knott Race where John Orrell featured again for the Harriers run from Hollins Farm, Far Arnside,
on a scenic course above Morecambe Bay and the Kent Estuary over 6 miles/1093 ft ascent.

The Race was won by Northumberland’s Matthew Briggs in a time of 36.10 and delighted to be out on a sunny day John who came home in 61st spot (55.31) told the Harriers “Arnside Knott, described as a short category B fell race, but its 6 miles was really more like trail than fell. The 1093ft of ascent was still a good work out for a Sunday though and we were rewarded with spectacular views for the effort.“

U17 Hollie Cubbon was running just her seventh race since September 2019 when she stood on the start line at the Preston 5 mile race on Sunday November 21st. The race was won by Wallasey AC’s Ray Clark in a time of 27.39 from Simon Croft in 2nd (27.45) and Matthew Holton in 3rd (28.46). Hollie finished in 14th place overall running 37.28 in her first ever attempt at a distance over approx 4k in cross country. Her time got her to 2nd place in the Women’s race and was a solid run as she now builds up to the Ribble Valley 10k race on December 27th. 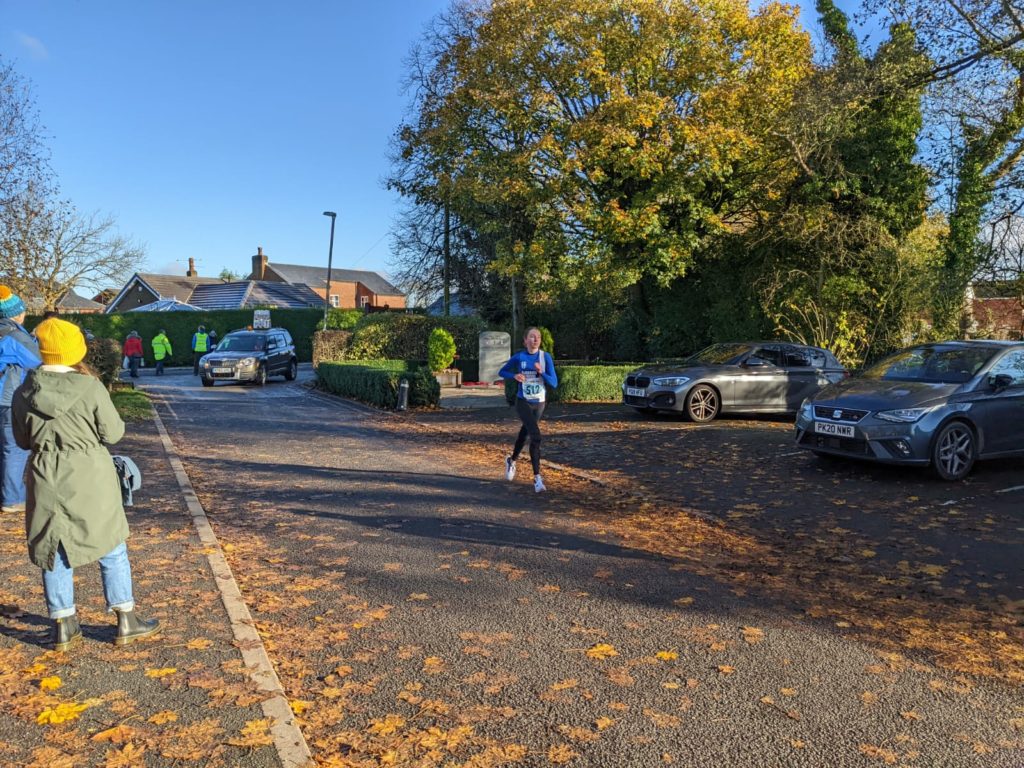