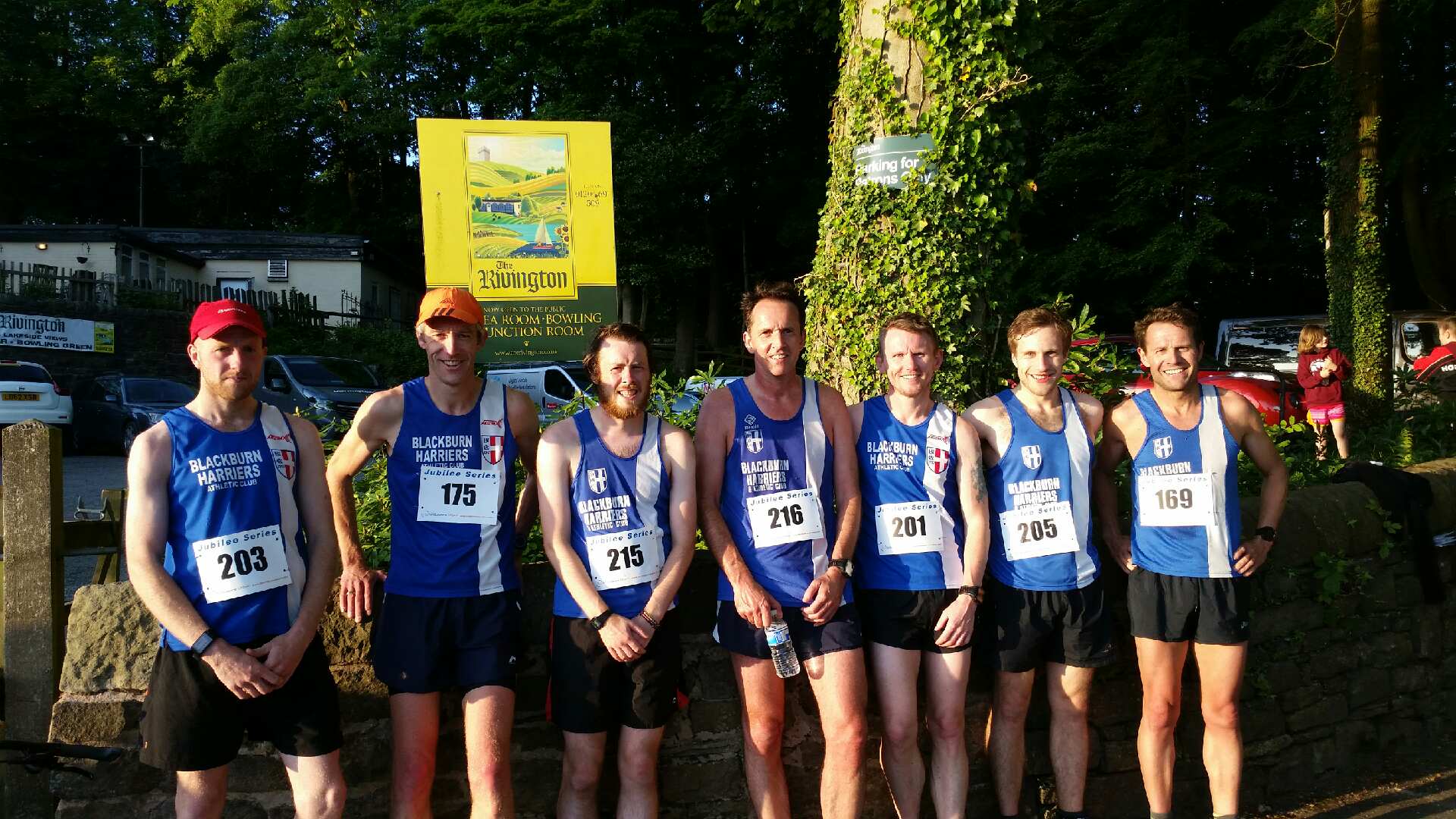 Five out of Five! First five athletes home in this, the first race of the Horwich Jubilee Series, all came from Blackburn Harriers and with two finishing 9th and 10th, that made seven out of the top ten for the Club.

Ben Costello, after running a track 5000m personal best of 15.53 had another very good run to win the Race in a time of 27.18. Karl Billington improving once again ran 2nd in the race clocking 27.54 which was just three seconds in front of Chris Davies (3rd) in a time of 27.57. Josh Holgate is another Harrier who is going from strength to strength, took 4th spot in 28.13 followed in by Matt Nuttall (5th) in 28.52 – with Paul Guinan in 9th (29.53) and Paul Brindle 10th running a time of 30.05, that gave the lads seven out of the first ten spots. Lindsay Davies clocked a new course personal best (36.56) as she came home in 43rd position. Having won the Team Race, Chris Davies added to the prizes as 1st V40 as did Matt Nuttall who took 1st V45 prize to make it a very good night out for the Club. 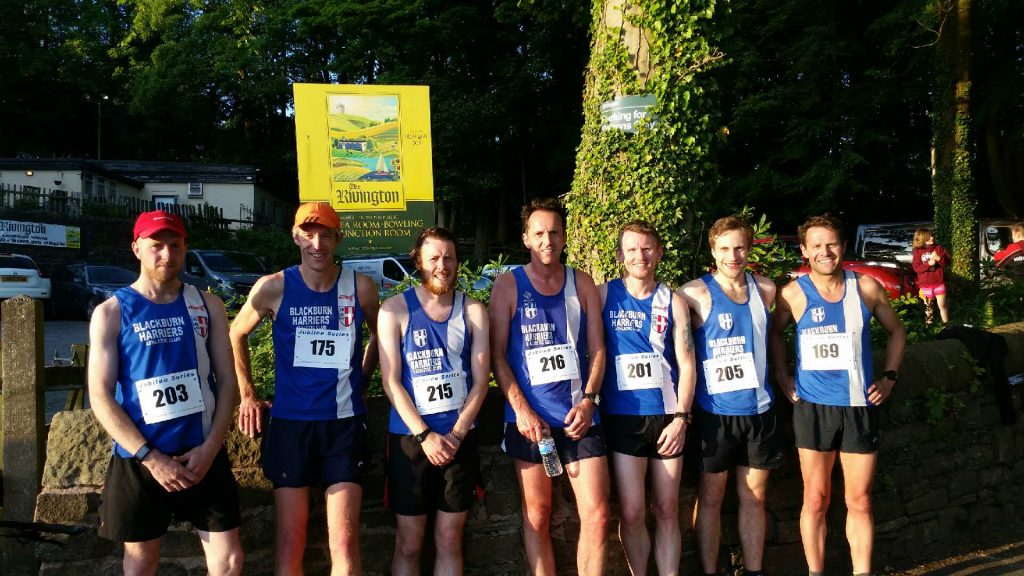 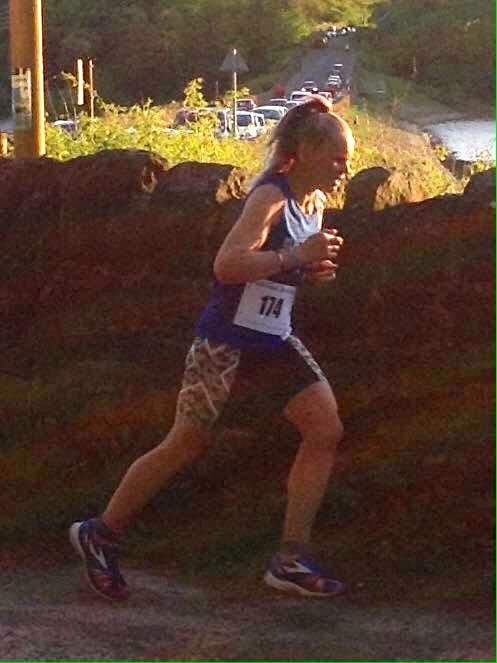 The Harriers Juniors backed up the Seniors as they provided the winner here too. 11yr old Daniel Smith won his race featuring sixty youngsters in a time of 5.39 being followed home by 9yr old Sam Aspey in 4th place (5.47), 10yr old Oliver Gill in 5th clocking 5.51 and 9yr old Hannah Davies in 20th place (6.38).

Keith Gill was so impressed by the youngsters as he told the Club after the Race “It was a perfect running night, still and not too hot. They arrived early, did a proper warm up and all got on the start line together to prevent getting pushed out by the home runners. 1 mile course…Fantastic times…with all 3 boys being under 6mins. Dan won the race with 5.39…He ran really well, strong start and stayed at the front with a very good kick for the final 200m. Sam is still only 9, made a really good start and stuck to it and finished with an amazing time for age at 5.47in 4th place. Oli ran his best mile time and was just behind Sam in 5th place with 5.51. Hannah had a great start, sticking with the Harriers boys at the start and finishing in 20th with another great time 6.38. Finally Dan’s brother gave it a try, as an unattached entry…his 1st race ever coming 33rd with 7.37. It was really good to watch them warm up as a team, start together and run as a group…and of course..1st, 4th and 5th for the boys was fantastic” 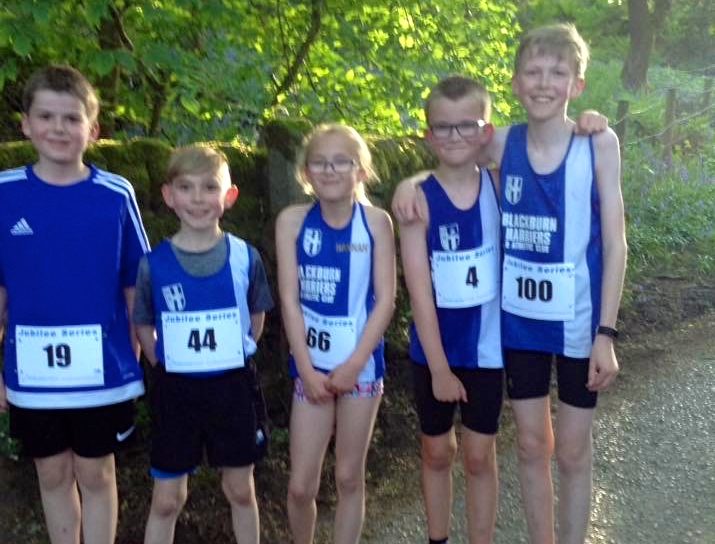 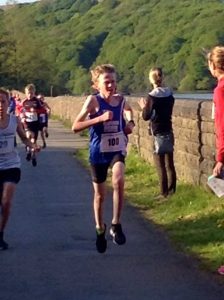 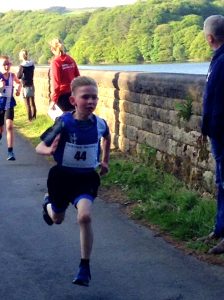 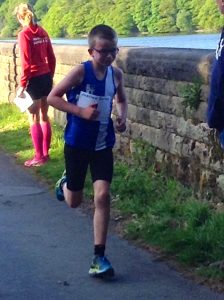 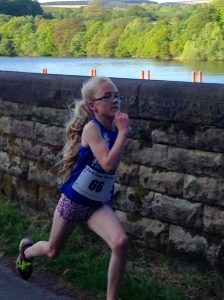 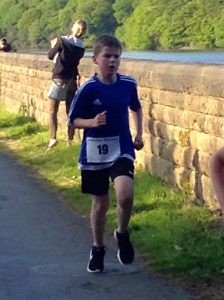 On another glorious evening for Fell running, two hundred and eighty eight runners completed the latest race in the Burnley & Pendle Grand Prix Series won by Thomas Corrigan in a time of 29.37. 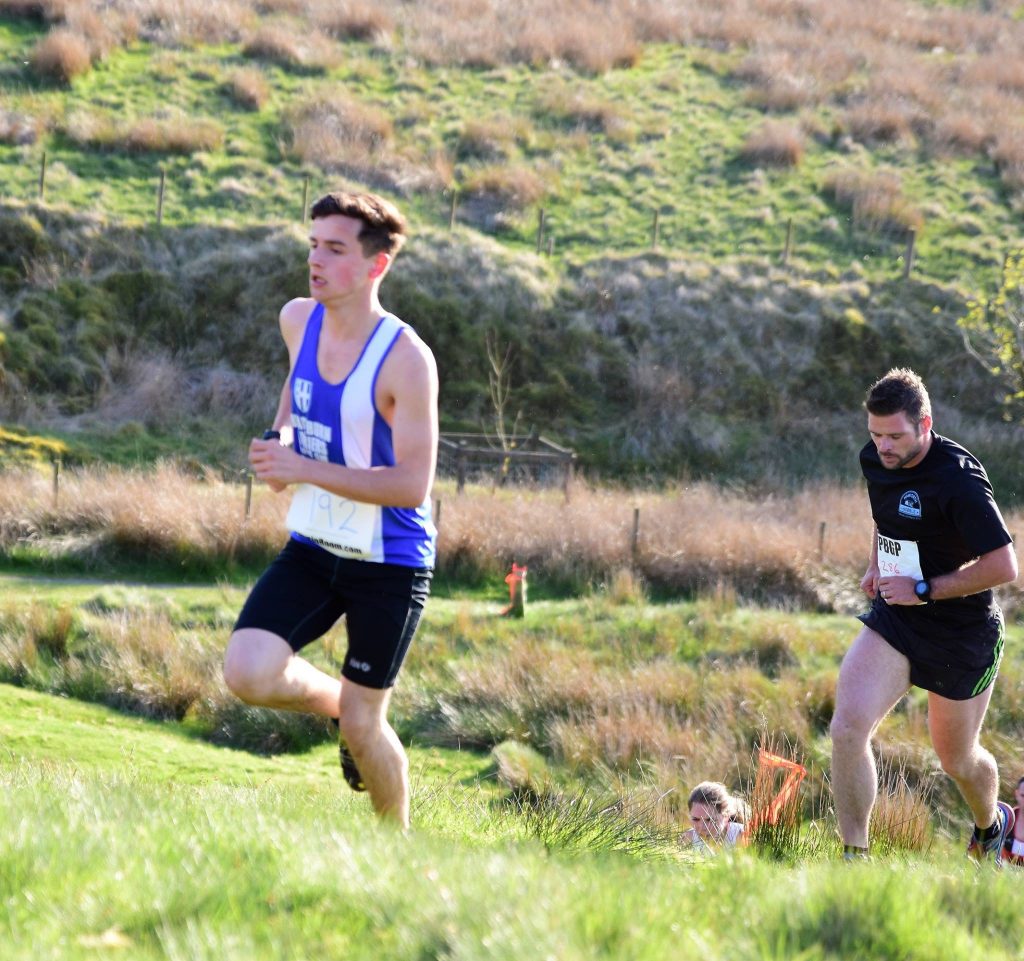 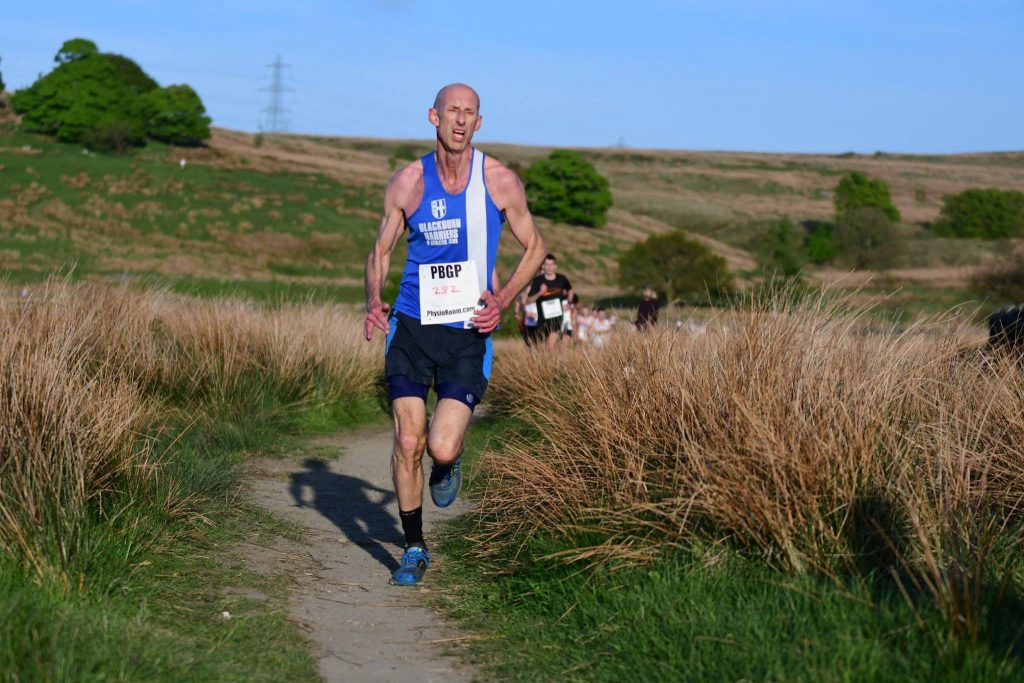 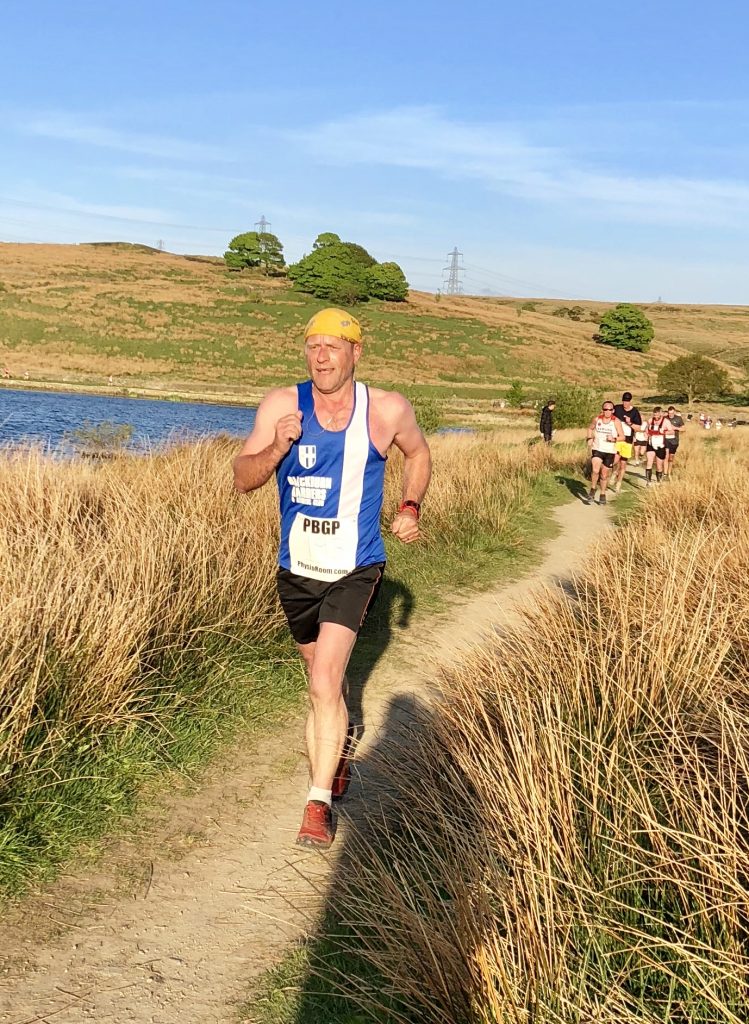 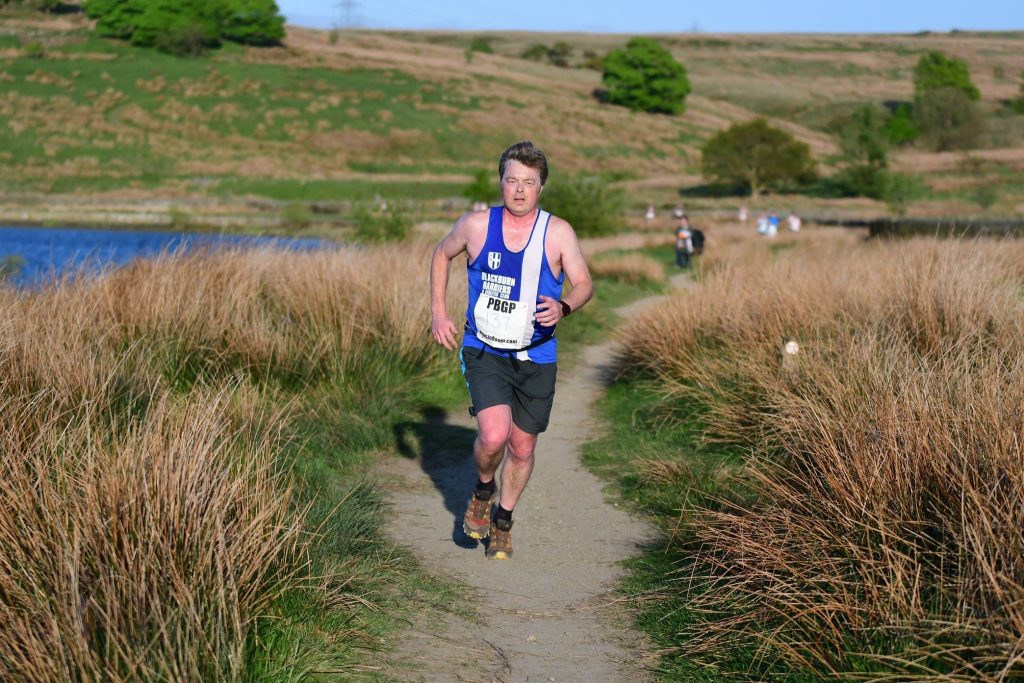 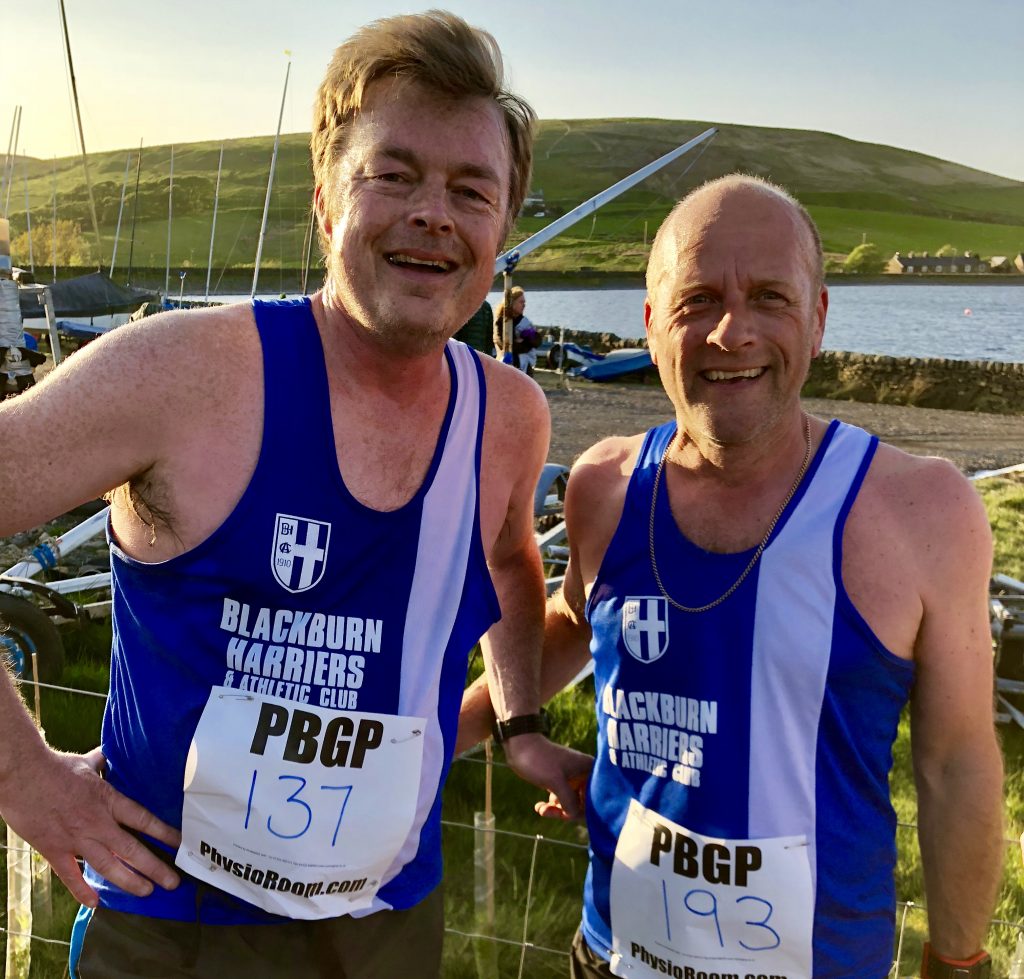 V50 Thrower – Tony Balko – is looking forward to the World Masters Championships this year and is in good form. Following his Senior Hammer Bronze Medal at the Lancashire County Championships at the weekend – a then new PB of 36.52m, he was back out at Trafford three days later finishing 2nd with another new PB of 37.43m, nearly a metre further. He then had a win in the Javelin (700g) with a seasons best performance of 30.96m for another very good competition result. 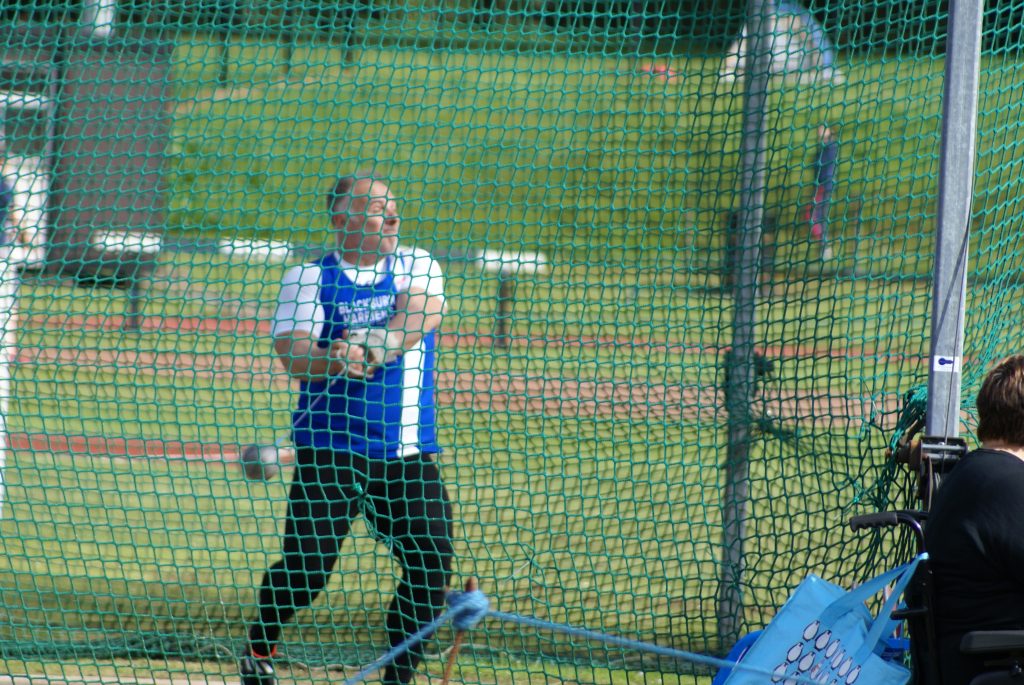