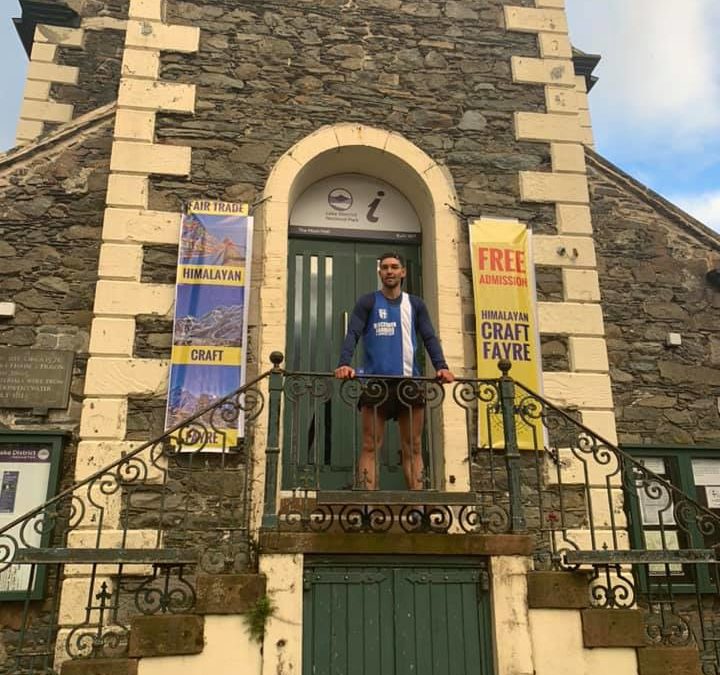 “On the 26th of June I’ll be challenging my self and taking on the Bob Graham round in the Lake District. This challenge consists of a run that’ takes in 42 of the Wainwright’s Peaks  accumulating in 66 miles and 27000ft of elevation the equivalent of Mount Everest! As much as The Bob Graham is about a mental and physical challenge. It’s more about a community of people coming together to see a successful attempt, without the support team plucked from the running community it wouldn’t be possible to complete a successful attempt. I’ll be running 5 different legs with a number of my fellow running buddies from Blackburn Harriers and other clubs around Lancashire and the aim is to get round the 66 mile route in under 24 hours and raise a good amount of money in the process.”

The Just Giving Link is still open and anyone who wishes can still donate.

How Jonny’s attempt unfolded is detailed in his own words as he covered a distance of 67.92miles, an elevation gain of 25.830ft with the whole attempt taking a total of 22hr 31.13 – a prodigeous feat in anyone’s language. 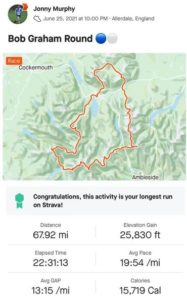 “On the 25th of June at 10 pm Friday night I stood at Moot Hall with fellow Harrier Josh Holgate and Prestons Alistair Palmer, and Andy from Borrowdale, ready to start my attempt at the Bob Graham round. Leg 1 of 5 started with the long climb up Skiddaw, but with spirits high and banter flowing the climb seemed to be over quickly and before we knew it we had already summited the first mountain and was descending towards the next! The conditions on the top made for some difficult navigation as visibility was down to only a couple of meters, this meant the easier of the descents into Threlkeld via Doddick route was our quickest and safest option and just after 3 hours we were at checkpoint 1 ahead of schedule” 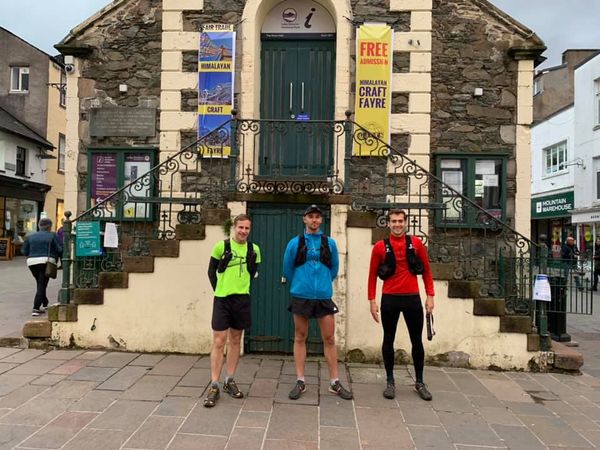 “Leg two saw me join up with James Eastman from Darwen Dashers also Alistair was eager to continue with a double stint, so with a quick re fuel at the road support provided by my dad and Sarah, and a quick change for some warmer clothing we where off and up the long climb to Cough Head still feeling strong and confident. The climb was long and a relatively quiet one, no one spoke much, it was full focus, eating every 30 minutes and drinking every 15 minutes, the two lads had there work cut out as the visibility didn’t improve and the wind really picked up, before we knew it we had arrived at Helvellyn a popular mountain in the Lakes that I recognised well and the sky started to turn from black to a dark blue and I knew the sun wasn’t far of rising and this spurred me on for the really notoriously tough ending to leg 2 on the out and back to Fairfield, once up Fairfield to touch the summit we where back down and at Leg 2 checkpoint and re fueling once again. A great shift be Alistair navigated and guided really well in tough conditions, Thank you!”

“Leg 3 the Beast, sat in my deck chair looking up Steel Fell, the enormity of the challenge hits me this Leg alone is 17 miles and includes England highest mountain Scafel Pike, doubts begin to creep in, I’m no longer confident, I look at James he’s calm and ready to continue and do back to back legs, he says you good, I nod, where off! Leg 3 is long and the conditions haven’t eased what so ever. It’s now been 9 or so hours running and not seeing much but the man in front of me, but we keep chipping away and we get to a little difficult section that links Scafel Pike to Scafell. Lords Rake, it takes all 4 points of contact to scramble up this section, so I’m relieved when this part is over and we are finally descending to the end of Leg 3 to Wasdale. What a superb effort by James feeding me and navigating me across not one but two difficult legs, what a legend. Thank you.” 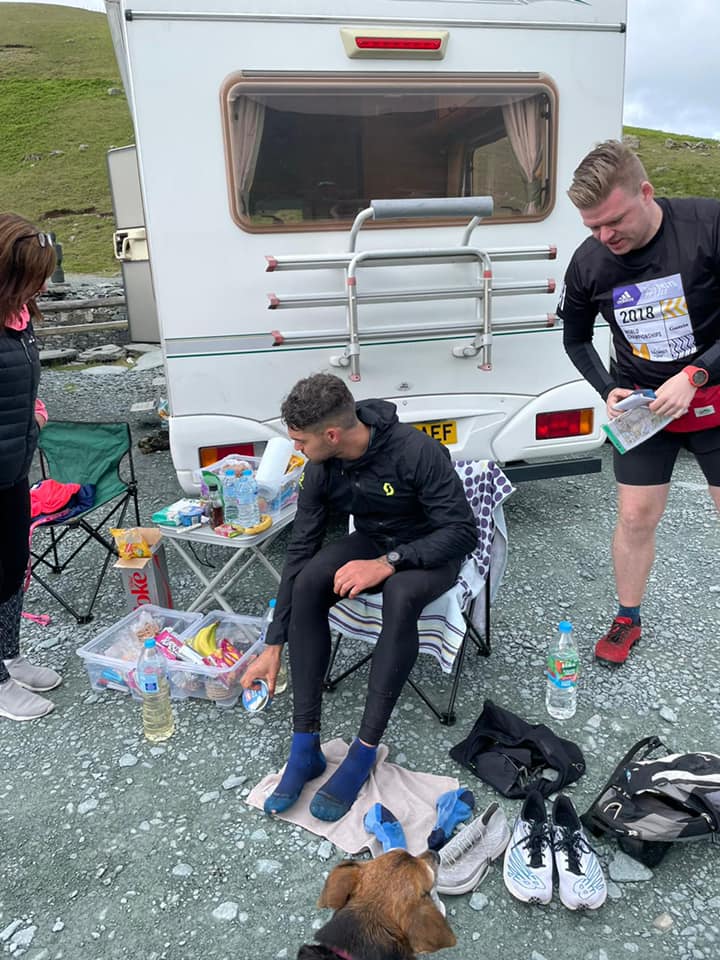 “Once down the long descent to Wasdale I approached the wooden gates at the car park and from a distance I recognise two familiar faces beaming back at me, this lifts my spirits once again after going through a really low patch, it’s fellow Harriers John horrocks and Tom Blayney and they guide me to the road support where Calvin Ferguson another Blackburn Harrier has set up the most luxurious pit stop with a wide array of snacks and drinks, and a deck chair and a neatly layed out towel with dry socks. I try my best to consume as much as I can here but it’s difficult to eat. After some words of encouragement from the lads I pick my self up and say to my self just get up Yewbarrow and you’ve broke it’s back you can do this. So Once again where off! 3 Legs down and two to go! Yewbarrow…. the hardest climb so far! It’s short and it’s steep and and every step is slow and painful. Leg 4 the hardest Leg for me, but down to John’s navigation and Blayney keeping my spirits up we was able to push on up some tough rocky climbs and onto the last check point where my dad had driven round and set up another road support point where it was a good chance to take on more fuel and gather my self for a final push to finish. At this point I think I was down 45 minutes on my 21 hour schedule. Leg 4 had been a beast. Thank you John and Blayney!“

“Check point 4 and the start of Leg 5, there was buzz in the air, the atmosphere was intense… one last push and I would have done it! Still slighty down on my schedule but hadn’t lost anymore on Leg 4. My dad and Sarah once again had set up the road support, fresh kit was layed out and pleanty more food on offer. I was joined by Liam Brindle and Callum Townsend and Calvin had made his way around and changed his kit ready to lead the navigation on the final stint. So off we headed up Dale Head, Calvin took the lead and made sure we headed in the right direaction while Liam and Cal made sure I was taking on fuel and drink regular and providing the banter to keep my spirits high…. Once at the top of Dale Head I touched the cairn and a new it was in the bag all I needed to do was bring it home now… as we neared the the last 400 meters I knew it was just around the corner to Moot Hall … all of a sudden the pain in my legs went and I began to break into a fast jog, the second I turned the bend and saw every one there clapping and cheering the jog turned into what felt like a sprint! Right up to the doors of the famous Moot Hall and to finish what was an epic journey of the Bob Graham round in 22 hours 31 minutes what a special feeling.” 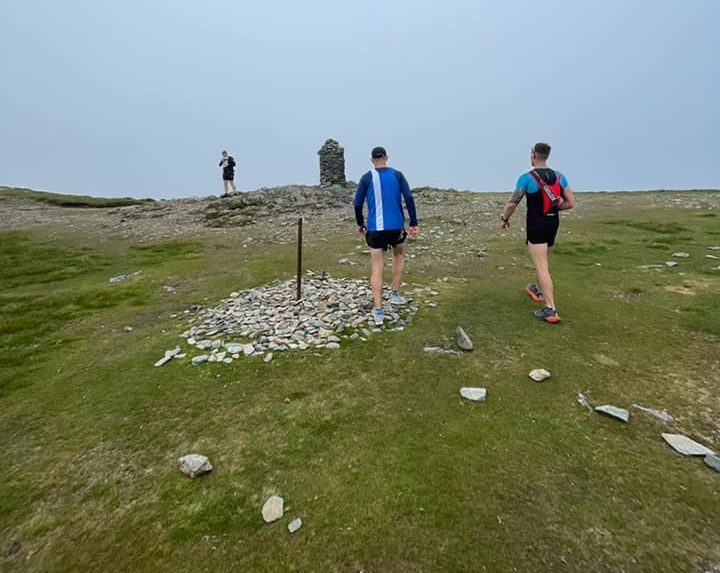 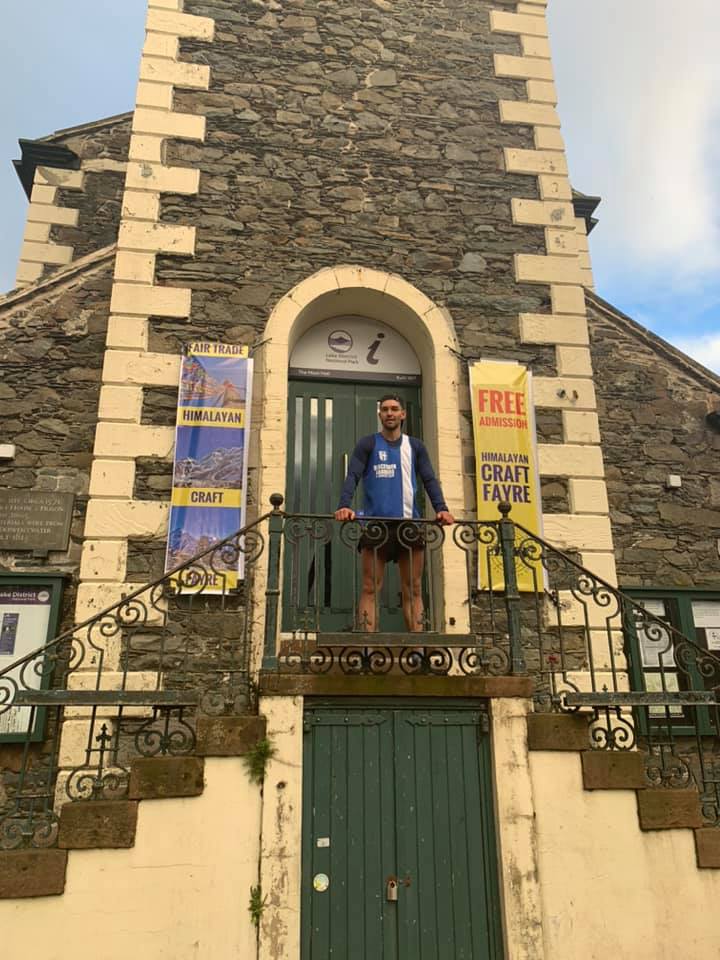 Blackburn Harrier’s FRA Ambassador – Calvin Ferguson – was involved in Jonny’s event and was so impressed by the determination he showed in successfully achieving his goal that he wanted to share his thoughts on the day and Jonny’s fantastic resolve in actually accomplishing something he had trained hard for, over such a long time. This was the view after climbing the final summit. 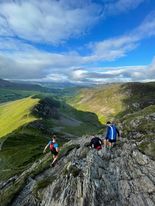 “What a brilliant weekend – I watched Jonny set off from Keswick at 10pm on Friday 25th June, knowing how hard he had prepped for this and I was so confident he would do it. He’d put together a brilliant support team, including both road support and runner support. I was on road support at Wasdale (end of leg 3, leading in to leg 4) as well as runner support for the 5th and final leg. I’d kept an eye on the tracker through the night and he was clearly progressing well, ahead of the 21-hour schedule. The poor weather on leg 3 caused some delays but he arrived in Wasdale to refuel and refresh at 11:52am. He left with Tom Blaney & John Horrocks to climb the ever-intimidating Yewbarrow, a 2,000ft climb of 40%+ gradient within 1 mile, straight up from the valley floor. I drove round to Honister Slate Mine and waited for Jonny, hoping that his knee would hold up after he mentioned a slight niggle as he left Wasdale. The niggle was nowhere in sight at he came flying down from Grey Knotts in to the car park. After a quick rest and a change of outfit to don the Harriers vest, we were off on the final leg, leg 5. We hit all 3 of the final summits on scheduled pace, Dale Head, Hindscarth and Robinson all proving no problem for Jonny to power through. An absolutely stunning view over Keswick unfolded right in front of our eyes as we descended the rocky crags down in to the Newlands Valley floor. A 7-mile run in followed, mainly on road, with Jonny digging deep in to his reserves to chip away and get it done, despite listing more pains and ailments than he had climbed summits (42 as we joked at the time, ha ha). He was in a positive mood throughout the whole day, a man with focus and determination to achieve what he had trained hard for over the past 2 years. He arrived at the famous Moot Hall steps at 20:31 on Saturday 26th June 2021, completing the Bob Graham round in 22 hours and 31 minutes. An absolutely fantastic run and an honour to accompany such a great athlete on a day that none of us will ever forget. Well done, Jonny. You worked extremely hard and got what you set out to achieve, you’ve done us all proud beyond words.” 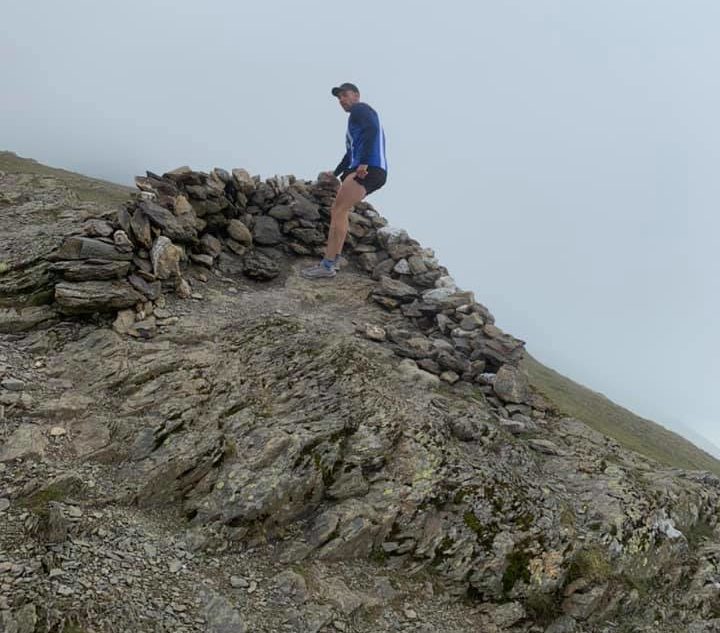 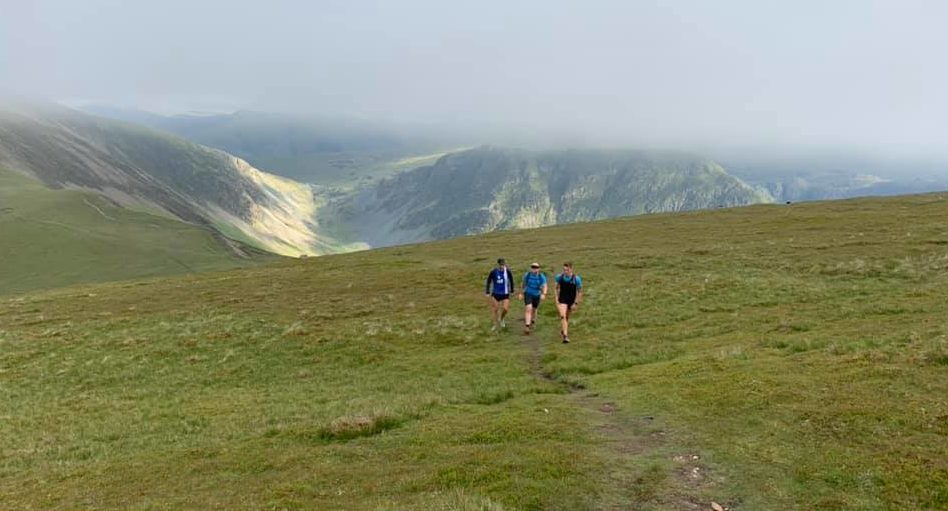 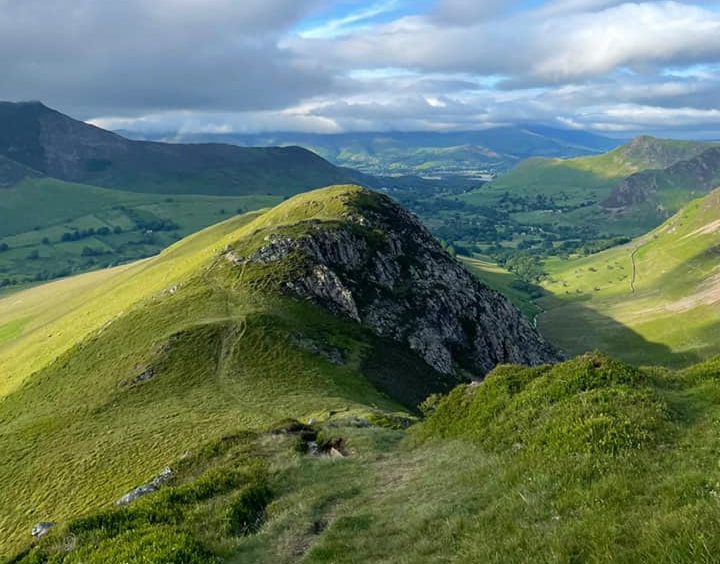 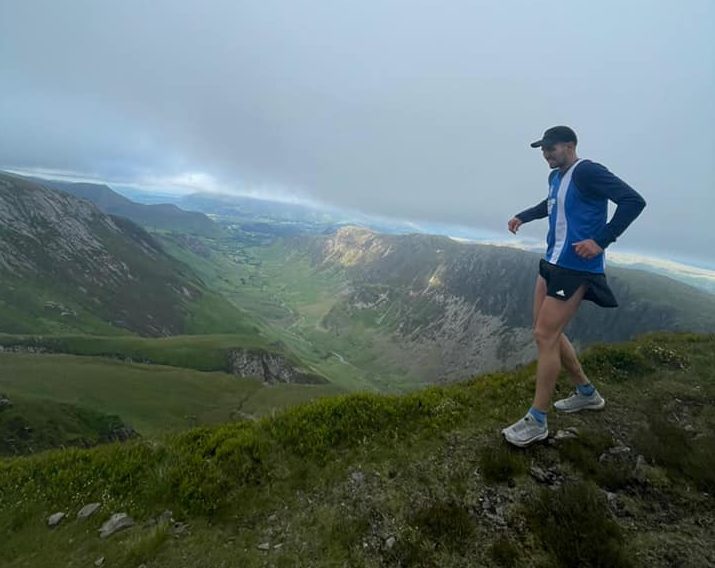