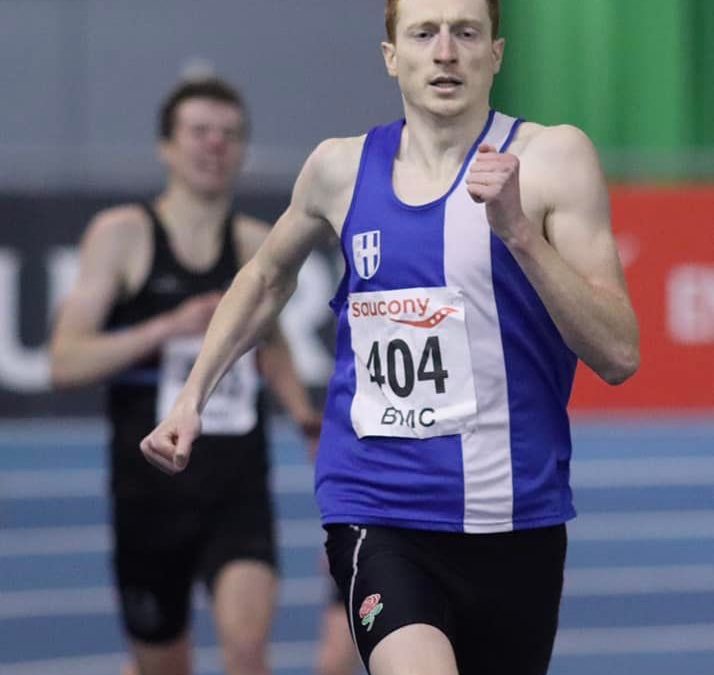 Dominic Walton kicked off his Indoor season in good form in a race featuring five athletes over 800m which he won comfortably at the finish clocking 1.53.42 with Ealing’s Ben Waterman in 2nd (1.54.97). Dominic spoke to the Harriers after his race had finished commenting  “I didn’t realize there wouldn’t be a pacemaker and after the first lap, even though it felt comfortable I didn’t want to be that guy that had everybody chasing him. Through 400m mark it still felt easy and then it made sense when I saw the clock tick at 58.89 so in my head I was thinking it was my race to lose at that point. I timed my kick well and just wanted to win which I managed to do. I was convinced there was someone right on my shoulder so I was quite happy to watch back and see I pulled a nice gap. A slow race to start the season but it’s always fun to win.” 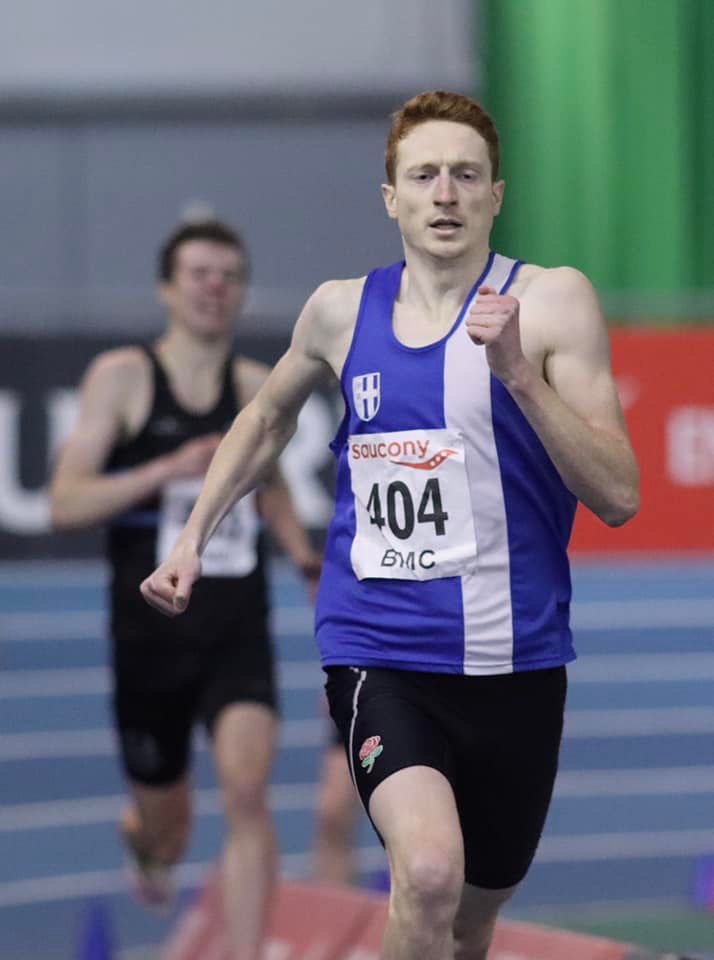 Fabulous news for U20 Ben Makin who has just been informed that he has been selected for the current senior Irish National Team for Modern Pentathlon and will be competing at world cups and world championships along with European championships for Ireland throughout the year in 2022. On hearing the news, Ben shared it with the Harriers who congratulated him on his achievement to which he commented that he was “Really happy to be able to join the Pentathlon Ireland senior team set up, it should make for a good season having already being selected for the Egypt World Cup 1 on March 22nd. Definitely a massive step in the right direction for my career on the 2nd largest stage other then the Olympics, this event is where I will be judged on and selected for further world cups, world championships as-well as Europeans championships later on in the year. Cannot wait to get going against the biggest names in the sport on a world level.”

Consistent, dedicated and continuous work has got Ben to this stage in his athletic career and it is throughly deserved. 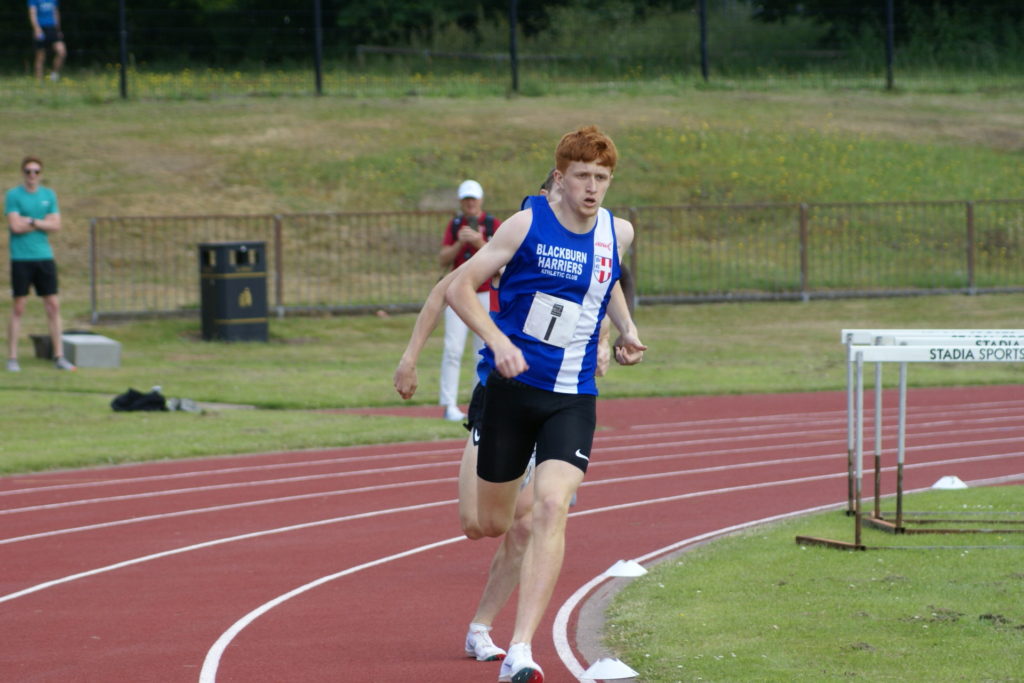 Ben Makin on the track for the Harriers

Poppy Preece was in action at the England National Indoor Championships at the weekend taking on the Pentathlon consisting of five events – 60m Hurdles; High Jump; Long Jump; Shot Putt and the 800m. 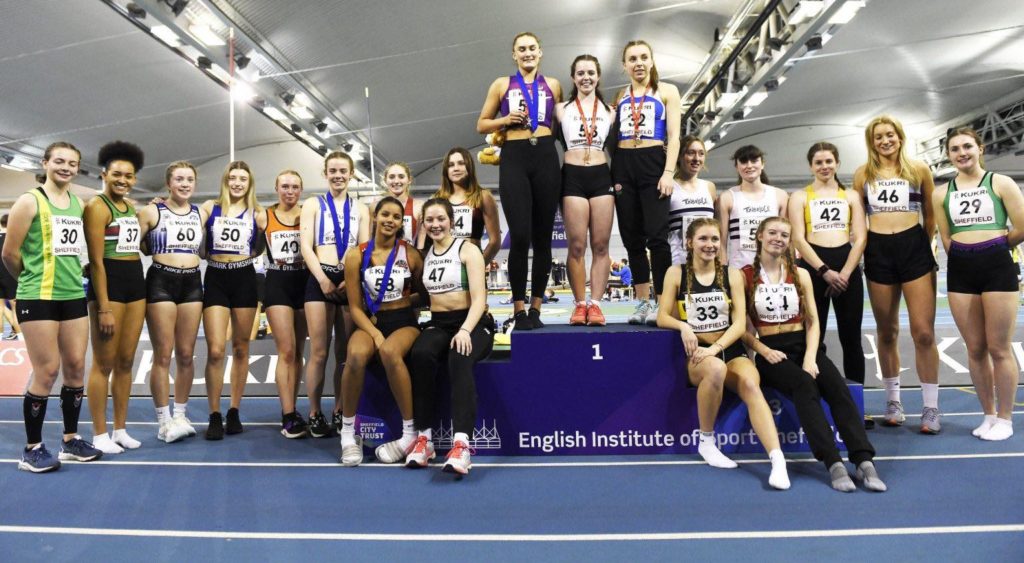 Starting off in the 60m Hurdles Poppy set herself a new PB staright away knocking three tenths off her previous best in running 11.04 in 5th place. On to the High Jump where she equalled her personal best – set outdoors –  with a clearance of 1.55m in 4th place out of 12 athletes in her Pool. Poppy’s second new PB of the day came in the Shot Putt – going into this event with a best of 7.10m (outdoors) she added a fraction short of a metre to that to throw 8.06m in 11th place. The Long Jump saw Poppy leap out to 4.00m in 10th place and close to half a metre down from her best after which she claimed her third new PB of the day, this time in the 800m where she placed 2nd in her Heat with a time of 2.35.51, some three and half seconds better than her previous best. This was a great start for Poppy in Combined Events, totalling 2544 points in her first outing.

Bottom of age U20 Lucas Woodhouse was having his first outing of the Indoor season and only his second race for the Harriers as he produced a good performance to take 2nd spot in his 60m Heat clocking 7.49 with team mate Samuel Mutombo – also bottom of age U20 placing 3rd in the same Heat with a time of 7.79, a new PB improving from his previous best of 7.80. Poppy Preece who had competed at the Combined Events the day before set a seasons best time of 8.67 in her 60m Heat (4th) as U17 Thomas Monks also set a new PB in his Heat of the 60m with 7.67. Bottom of age U17 Harrison Allock clocked 8.28 in 3rd place in his Heat – his first time over the distance. Daniel Nuttall top of age U15 and Jacob Fisher also top of age U15 went in the next 60m Heat, both of them producing new PB’s as Daniel took the win in 7.41 with Jacob placing 3rd in 7.80. Top of age U15 Millee Schofield set a seasons best in her Heat in taking 2nd spot with a time of 8.30. 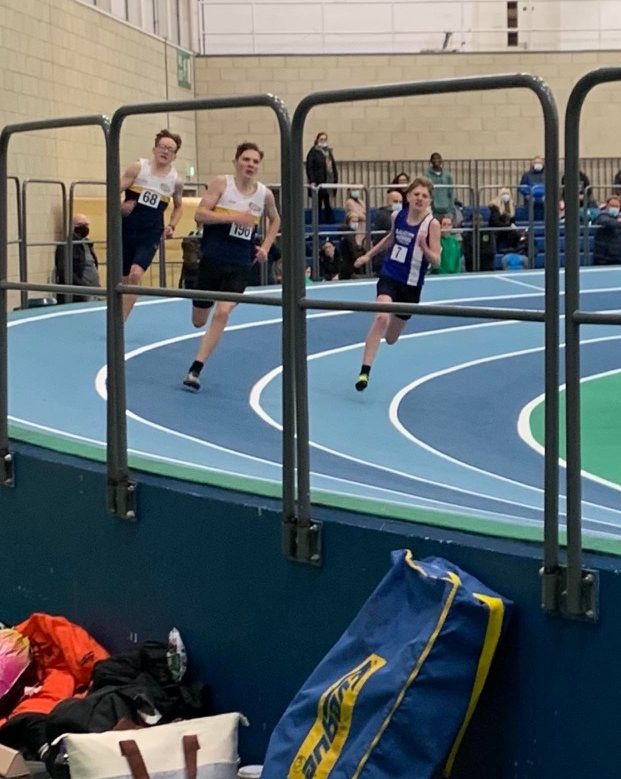 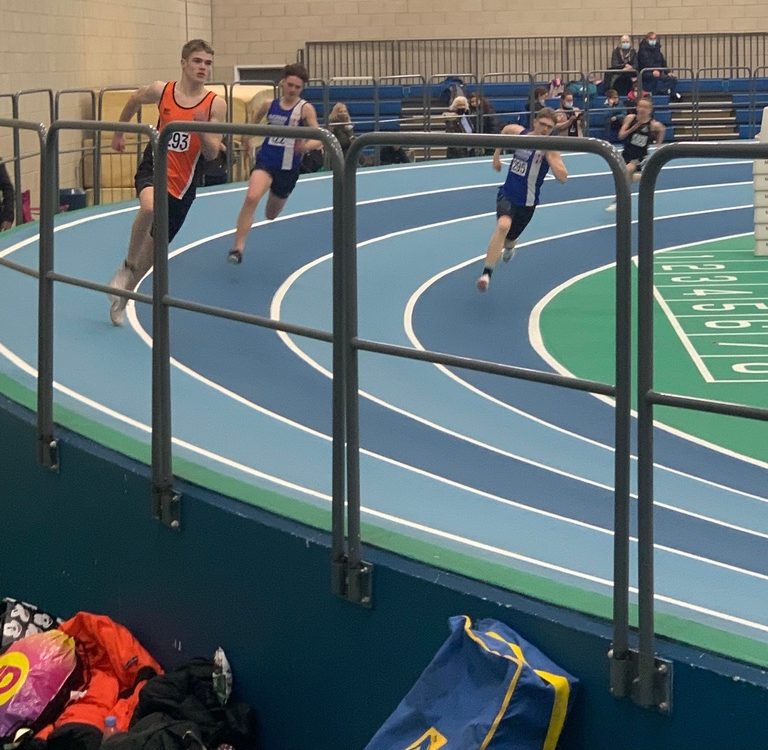 Adverse weather has no inhibitions for Helen Leigh and John Orrell and so it proved as they took on the S.O.B Kong Race at Braithwaite taking in Side Fell, Outerside, Barrow). Race website describes the Course thus “Our third race now starts with a run up from the cattle grid at the bottom of the Braithwaite Lodge track, past the lodge and onto the fell at the bottom of Barrow. Head right, traversing the bottom of Barrow to reach the stream crossing between Barrow and Stile End, climb up to join the main track on to Stile End and re-join the old route. You then head straight up the front of Stile End, descend quickly and make your way towards Outerside. Here there is a short flagged section to get you back on the track down to Barrow Door. A quick sprint up to Barrow and then it’s a flying long descent down the front of Barrow to finish back at Braithwaite lodge. It’s a 5 mile race with 1640ft of climbing and is a beautiful route.”

One hundred and sixty five runners stood on the start line with the race being ultimately won by Ambleside’s Ben Sharrock in a time of 38.13 with Cumberland Fell Runners Joseph Dugdale in 2nd (39.07) and Keswick AC athlete Matthew Atkinson in 3rd (39.10). Helen finished in 48th position with a time of 51.22 and 4th woman overall out of thirty eight who ran the race and after she had finished, Helen told the Club  that she “Had a solid run in fairly horrid conditions for 4th lady. Actually wore gloves and a buff, unheard of! Obviously still in vest and shorts though 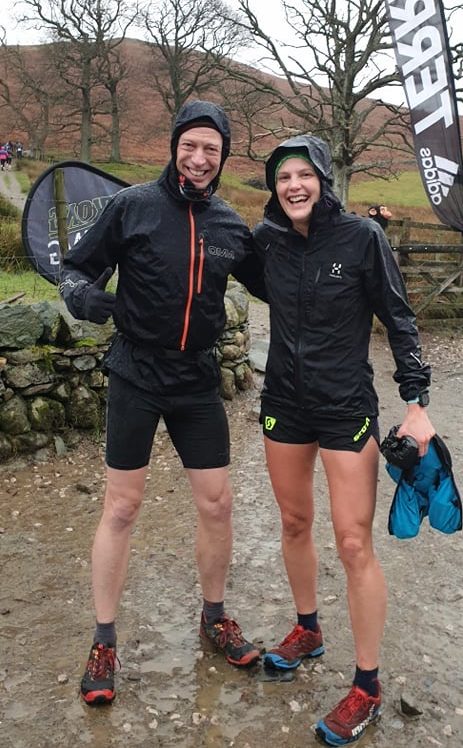 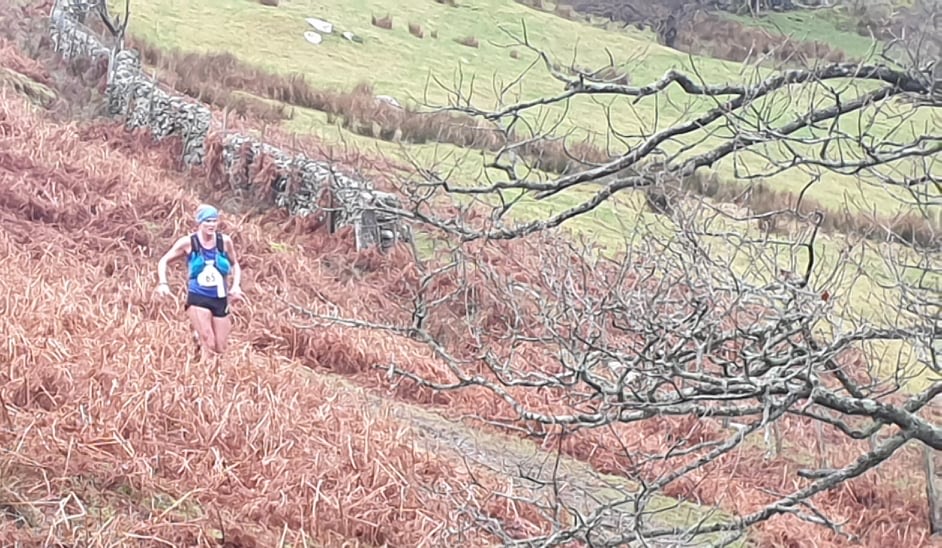 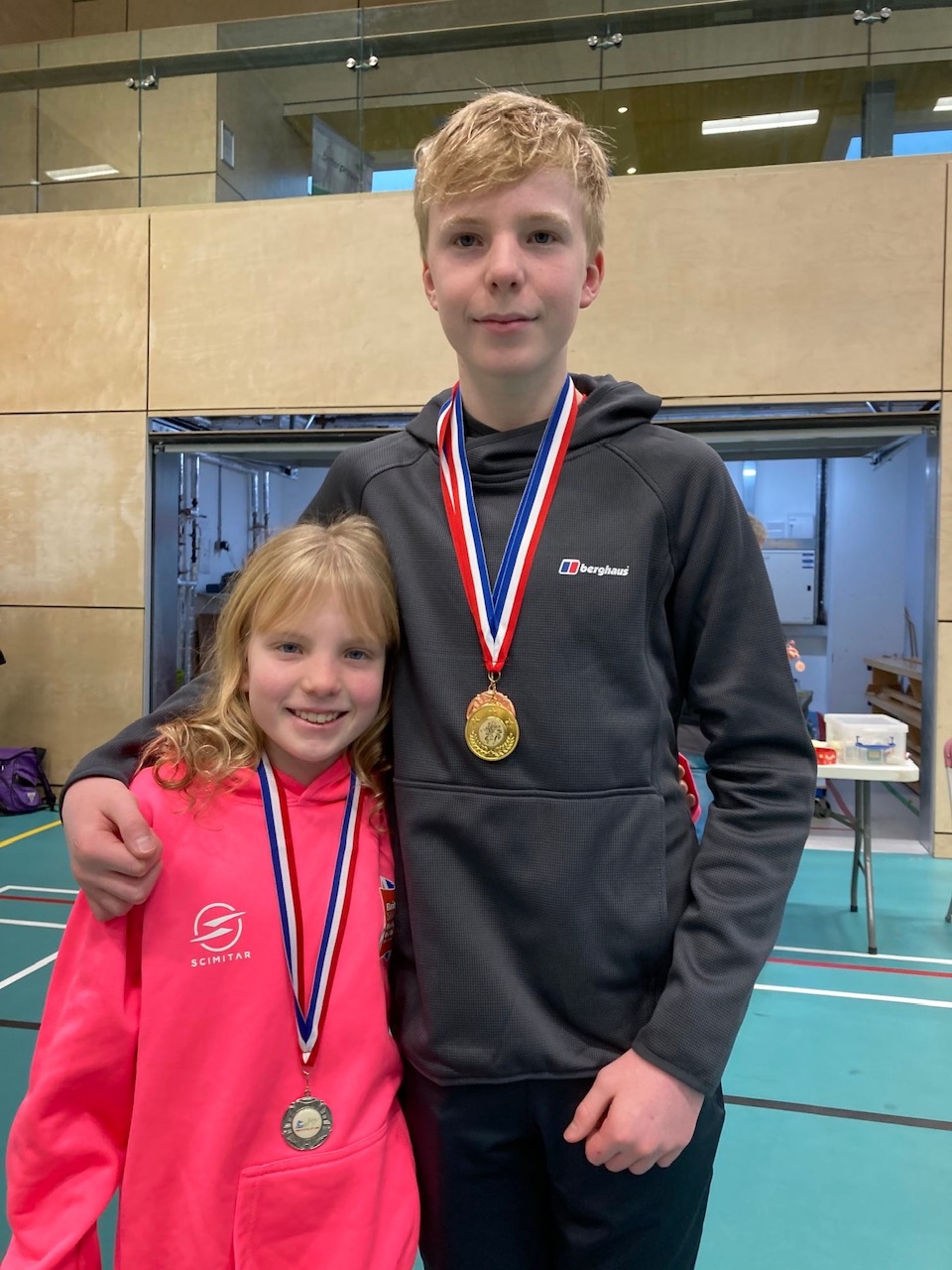 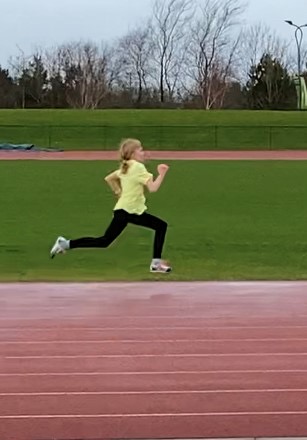 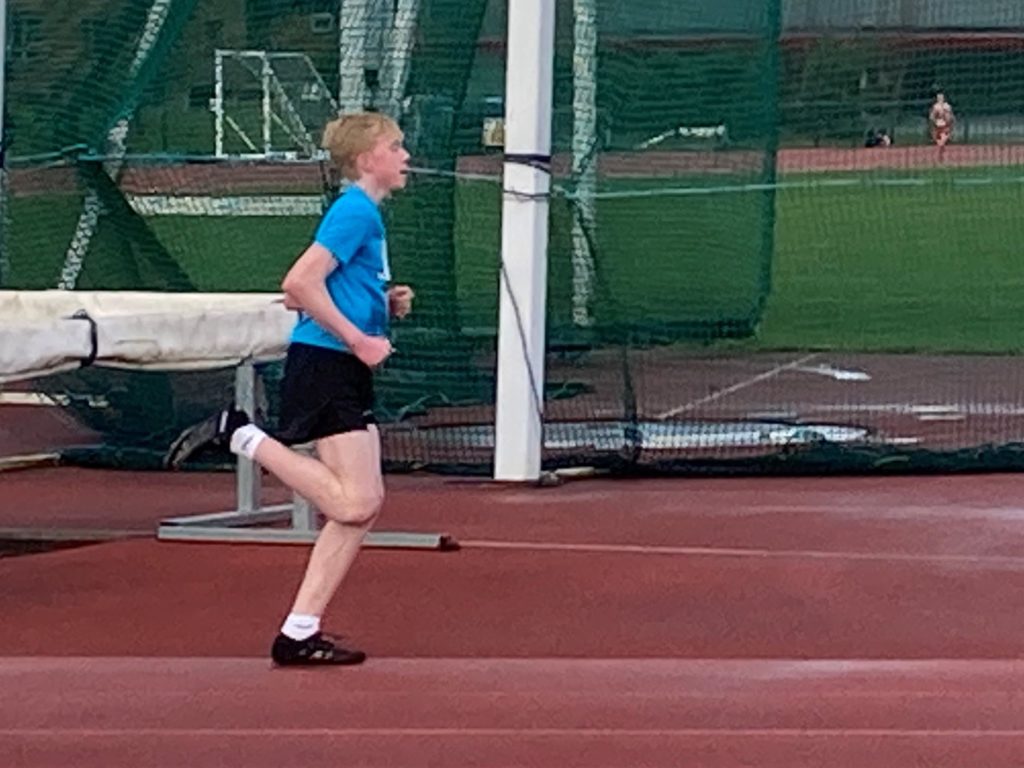