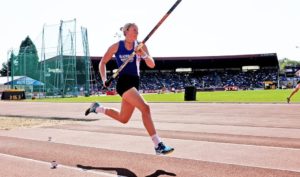 Holly Bradshaw is just five weeks away from competing at this years World Champioinships in Doha and what better way to prepare that winning the British Championship title – her 12th in all – with a Championship Best perforamnce and seasons best vault of 4.73m.

Holly spoke to the Club after the Championships commenting “To win my 12th British Title (7th Outdoors) in a SB and CBP is an honour, especially wearing the Blackburn Kit. I felt really good today – it’s been 6 weeks since I jumped full run in a competition so when the bar got higher I lost a bit or discipline but I’m in good shape, probably the best ever so I am now looking forward to Doha. It was also tricky being so hot and being out there so long so I have two more competitions now where I can really attack the 480 barrier“.

Jess Judd had another great run to make it the second Blackburn Harrier to qualify for the World Championships in Doha, this time over 5000m. Having recently set her 5000m personal best of 15.16.47 and having won the World Student Games 5000m, Jess continued with that rich vein of form to take Silver Medal at the Championships in a time of 15.35.82 and just a second in front of Laura Weightman in 3rd (15.36.73) – the race being won by Eilish McColgan (15.21.38). Next stop – the World Track & Field Championships.

An absolutely delighted Jess spoke to the Harriers after her Race telling us “I’m so happy, I really didn’t expect it but I trusted in my training and race plan and did what I had to do and come top 2! Over the moon and honestly never expected it to happen which just makes it even better! Has been a great year as my first real attempt at the 5k so to make the world champs is a dream come true!“

Charlotte Williams finished off here 2019 season at this years British Championships held in Birmingham at the weekend where she placed 4th with a distance of 58.70m – just 15cms off a third placed Bronze Medal. She was competing in her first Senior British Championships which involved three senior women, three U23 women and Charlotte, who is only 17yrs old which is a fabulous achievement.

Charlotte finishes the season as No. 1 in the Women’s U20 Rankings and 7th overall and the only U20 Woman in the top ten which alongside winning her first GB Vest this year, makes the season very special indeed. After the Final, Charlotte spoke to the Harriers about the day and her season saying “Competing in the British Championships at 17 years old was an amazing experience. I didn’t get the result I wanted but I am overwhelmed with the long season I have had and how it’s gone. Now for a short break then back in September to put all my effort into winter training. Thankyou for everyone this year who has helped and supported me, it means so much and pushes me through. Hopefully next year will be even bigger and better’

Glorious sunshine at Blackpool for the final fixture of this years Mid Lancs T&F season, ending as it does with the Medal Meeting. Athletes having contested a minimum of two fixtures throughout the season, qualify for a Medal for placing first, second or third at the Medal meeting on the day. Blackburn Harriers picked up a bag full of medals with seventeen winners, fourteen seconds and eight third places alongside twenty new PB’s.

One of the highlights of the day for the Harriers was the sight of Joanne Nelson (V45) running 4.56.20 to take her into second place in the V45 National Rankings behind Caroline Hoyte. Joanne went through 800m in 2.36 and then ran a 72 second last lap to smash her previous best time of 5.01.0 by over four and half seconds. Fantastic performance.

Anna Peers has had another fine season, being an integral part of the Northern League Division One team which won the title this year. Again at the Medal Meeting Anna took another couple of wins in the Senior Women’s Shot Putt with a big new PB by over half a metre (11.38m) before going on to win the Javelin with 37.94m and taking 2nd spot in the Discus with 33.96m. Great to see Sarah Henton out again for the second time this season – hoping to see much more of her in 2020 – as she won the Discus with a throw of 36.26m. Abigail Brown finished 4th in the Discus which had a pretty strong field, throwing 27.35m.

Another mainstay of the Clubs Northern League Division One Team – Anthony Kent – had another good day – first of all winning the Senior Men’s Shot Putt with 11.20m, winning the Discus with 39.20m for a new PB by nearly three quarters of a metre and then added over a metre to his Hammer best for a new PB and the win, throwing 46.73m. Good also to see Nathan Billington back in action in the Senior Men’s Shot Putt with a throw of 8.55m (4th) and 33.91m in the Hammer (2nd).

In the Jumps – Imogen Mansfield and Liberty Thompson were among eight athletes which saw just 31cms separate 1st place (4.79m) to 7th (4.48m). Imogen placed 6th with 4.57m as Liberty jumped out to 4.11m in 8th – just outside her personal best after which she was just 5cms shy of her best in the High Jump, clearing 1.45m in 3rd and ending her day with a throw of 19.86m in the U17 Women’s Javelin (3rd). U17 Ben Branton leapt out to 5.43m in the Long Jump in 2nd place. U13 Findlay Carroll came 8th in the Long Jump with 3.29m. Kyle Taylor-Pomfret was back in action after a six week lay off due to a broken wrist – doing the High Jump – and went straight back into the High Jump on the day, clearing 1.40m in 8th place. Lucy Rishton jumped out to 3.80m in the U13 Girls Long Jump for 4th spot in a field of 19 with Niamh Gater in 7th place (3.73m) which was just cms outsider her best.

The U15 Girls Long Jump featured 14 competitiors with Kiera Booth placing 8th (3.76m) and Skye Greenacre 10th with a jump of 3.70m. In the High Jump Skye added 10cms to her previous best for a new PB clearance of 1.35m with Kate Cookson coming in 8th with a clearance of 1.30m.

The U13 Girls Throws saw Tilly Pollard and Madison Bontoft in the Shot Putt. Northern Silver Medalist last weekend – Tilly Pollard – continued that good form as she won with a throw of 7.81m backed up by Madison who came 2nd with 6.72m. Kady Thompson joined the two girls in the Discus with Tilly recording her second win of the day with a new PB by over a metre (24.25m), with Madison in 3rd also with a new PB of 15.22m and Kady in 5th making it a hat-trick of new PB’s in the same event with her throw of 13.73m. Kady then set a new PB – her second of the day in the Javelin with 19.82m in 2nd as Madison also set a new PB in the event with 16.55m in 4th.

Tom Marchant, Craig Greenough, John Orrell, Danny Teare, Ian Clarkson and Mark Wilkin of Blackburn Harriers all ran in this Category AS. 5 miles / 1499 ft. Race run in fabulous weather, which was also hosting as the Selection race for the Senior, U23 and U20 teams at the Home International Races on 21st September.

RESULTS NOT AVAILABLE AS WE GO TO PRESS

The day after Pendleton and still very hot, John Orrell took on another BOFRA Race at Halton Gill finishing in 13th place. RESULTS NOT AVAILABLE.