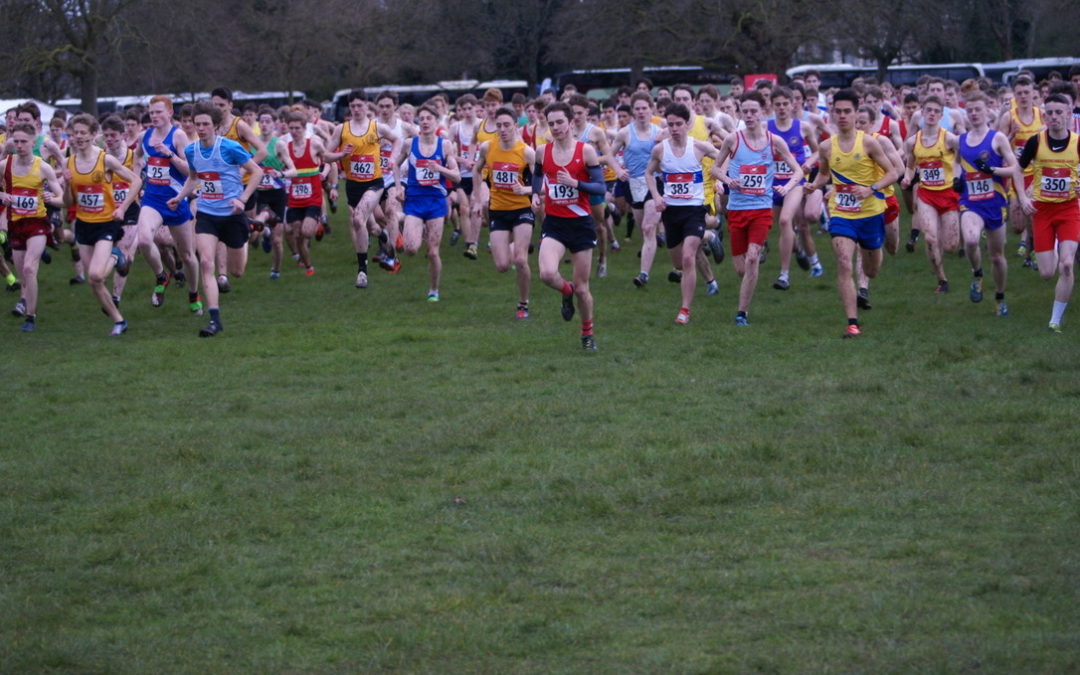 Sefton Park was rammed pack full of athletes, Coaches, Team managers and parents on Saturday as this years English Schools Cross Country Championships was attended by thousands. Lancashire U17 Men had won a Bronze Medal at the Inter-Counties Championships last week at Loughborough (March 7th) and most of them were out again this week, representing the Lancashire Senior Boys team where they went even better by picking up the Team win – the race featuring 45 Counties from all over the country and 323 athletes. Among the athletes were Blackburn Harriers Matthew Ramsden and Sam Hodkinson in the Lancashire Senior Boys Team along with Isaac Butler and Dexta Thompson in the Lancashire Junior Boys Team. 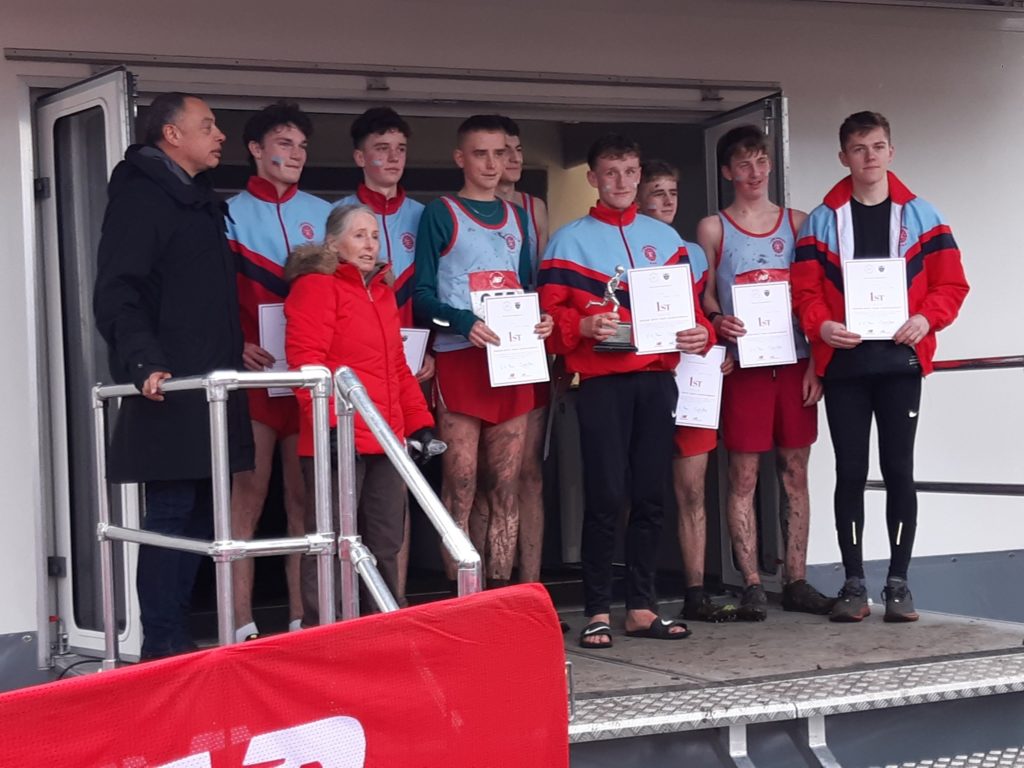 Video of Lancashire Team being presented with their Winning Certificates 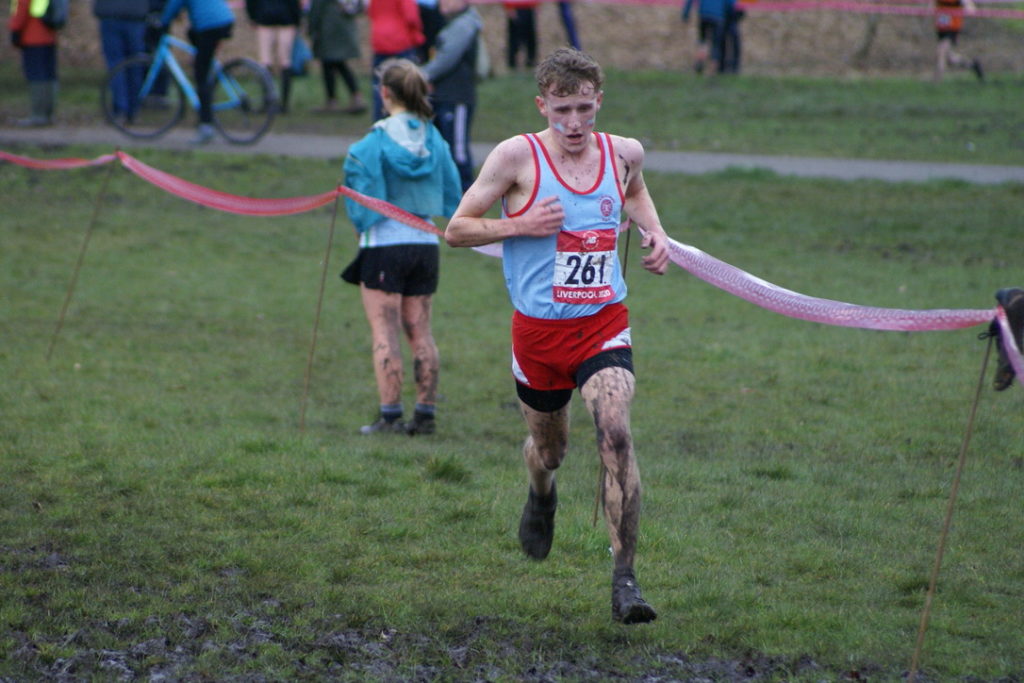 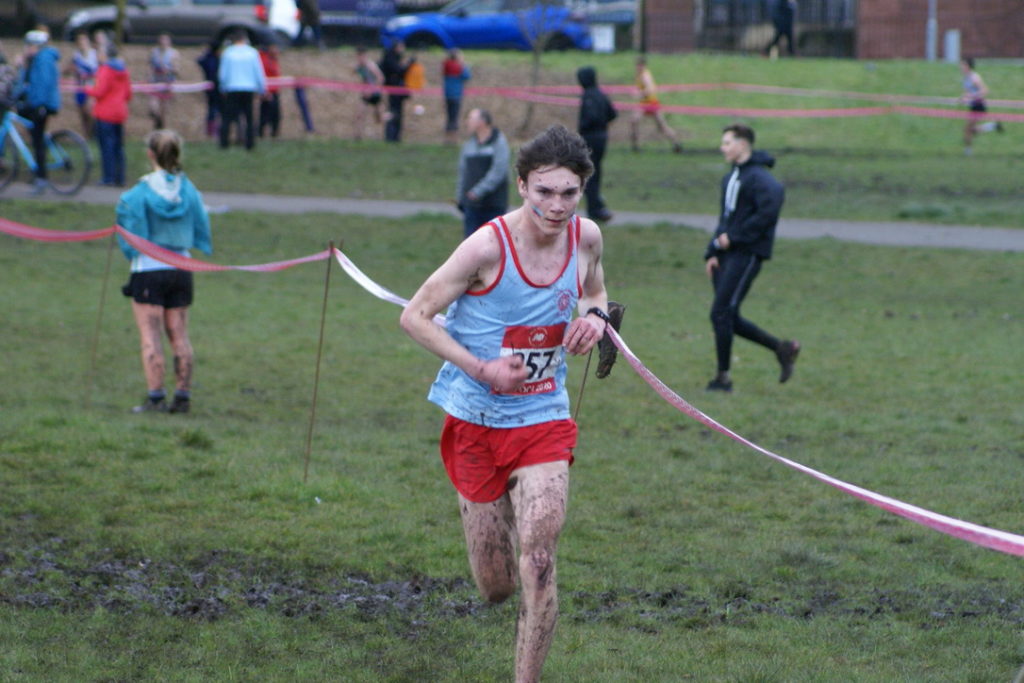 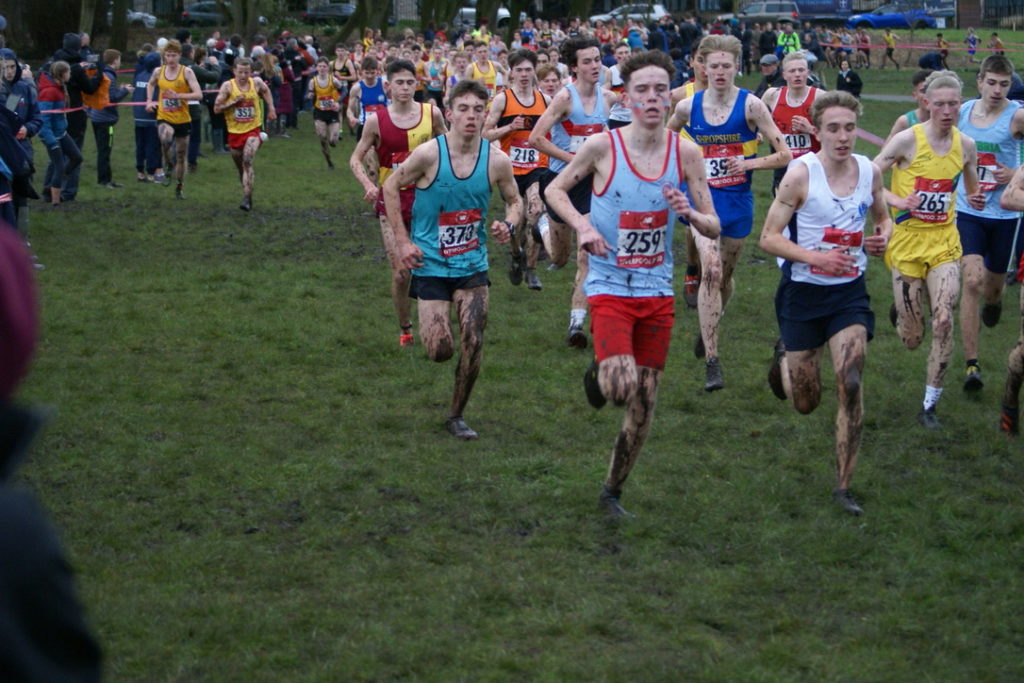 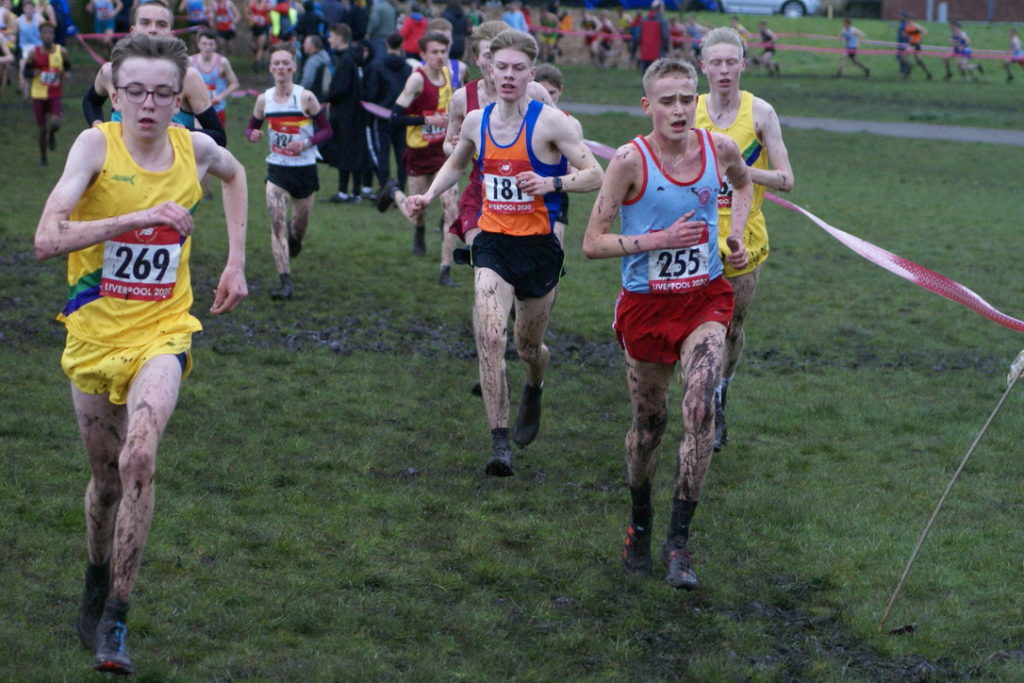 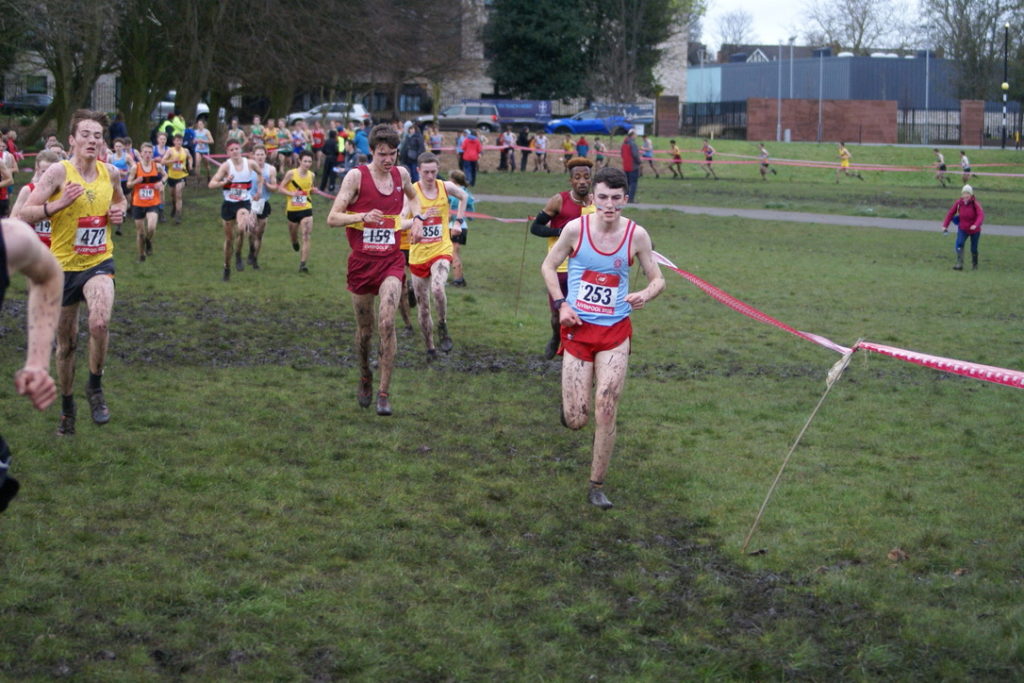 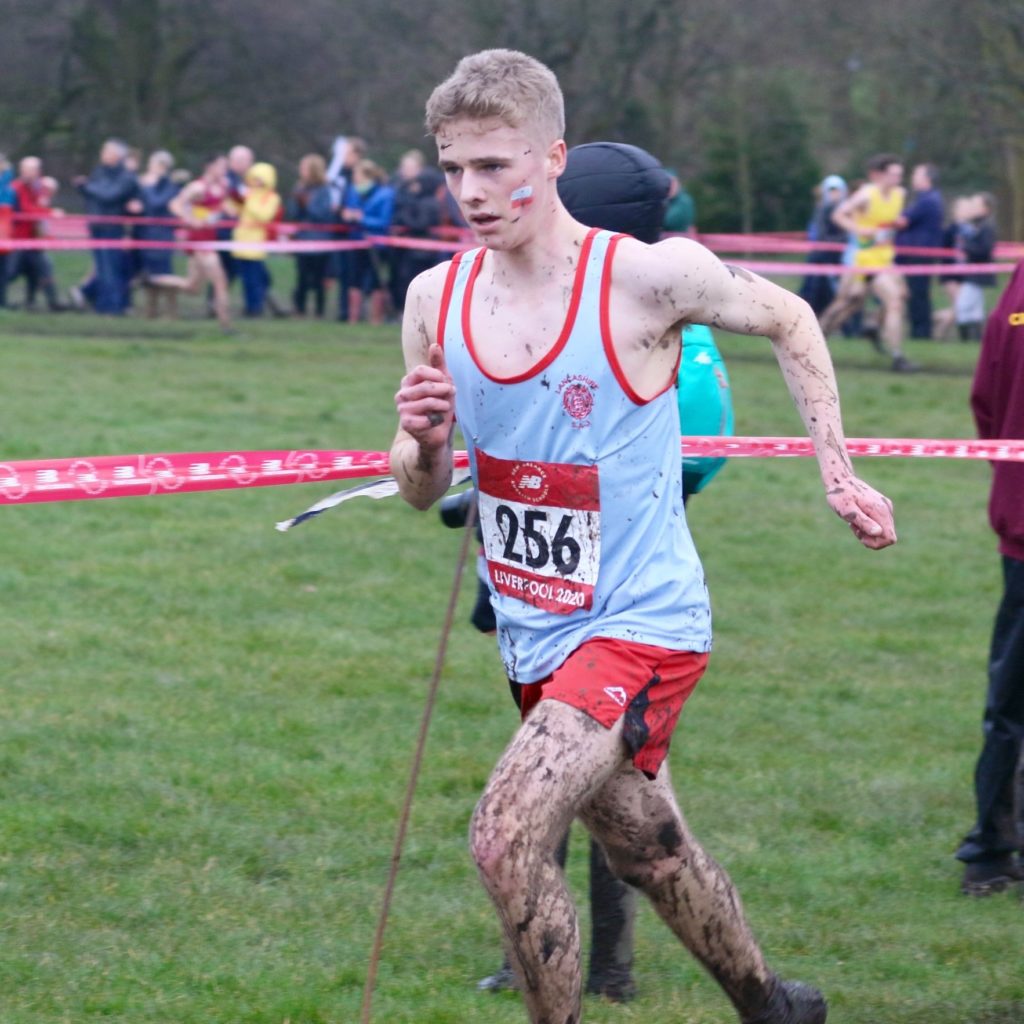 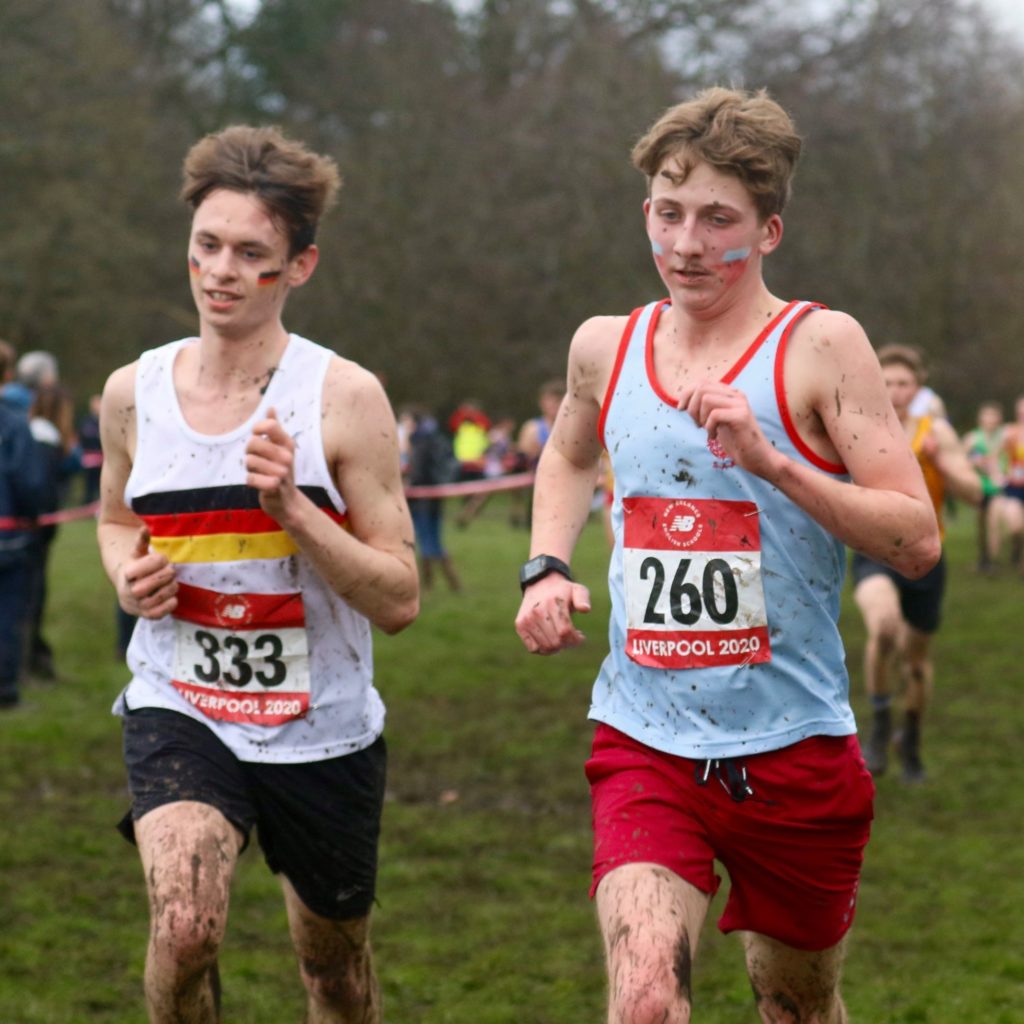 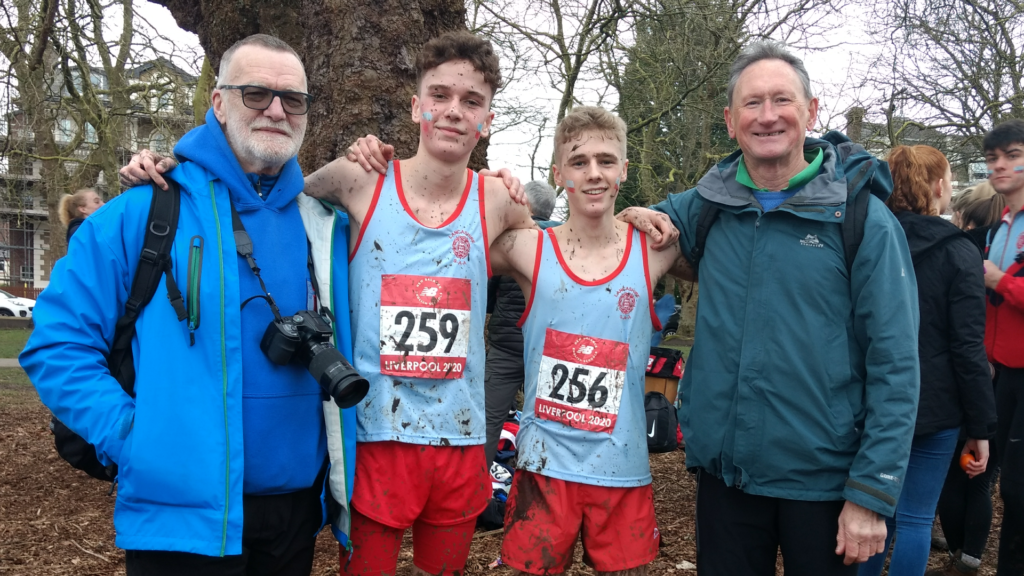 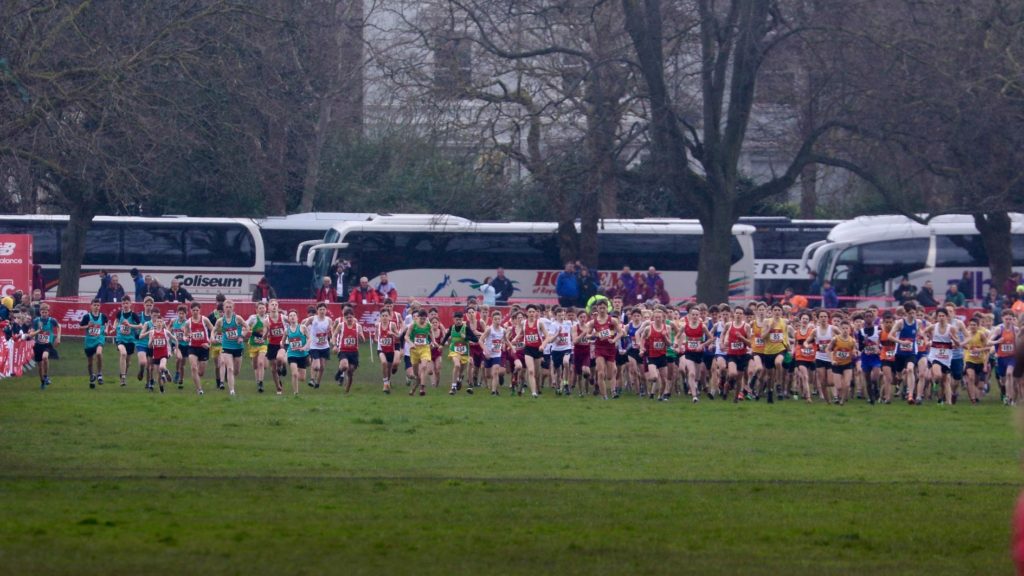 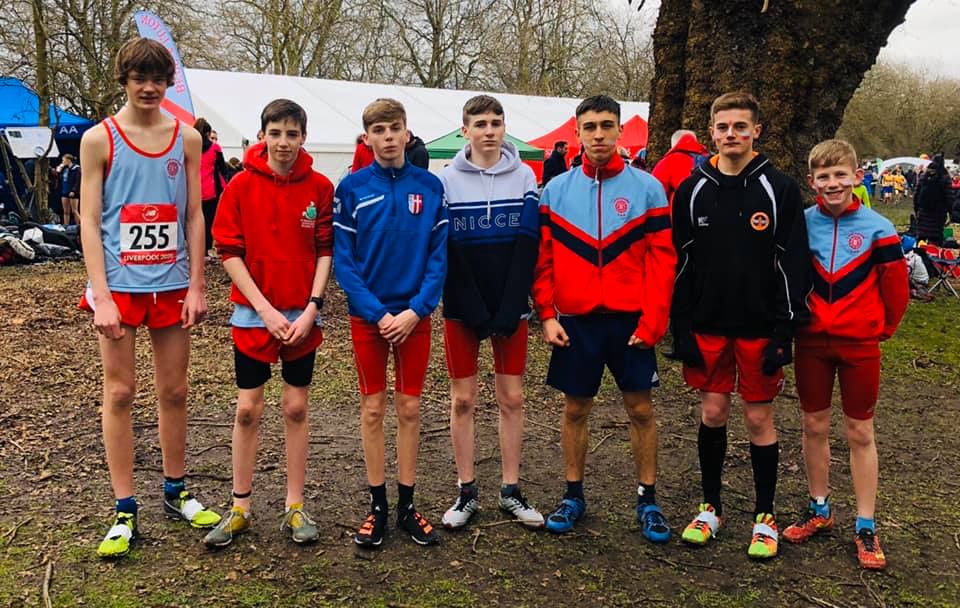 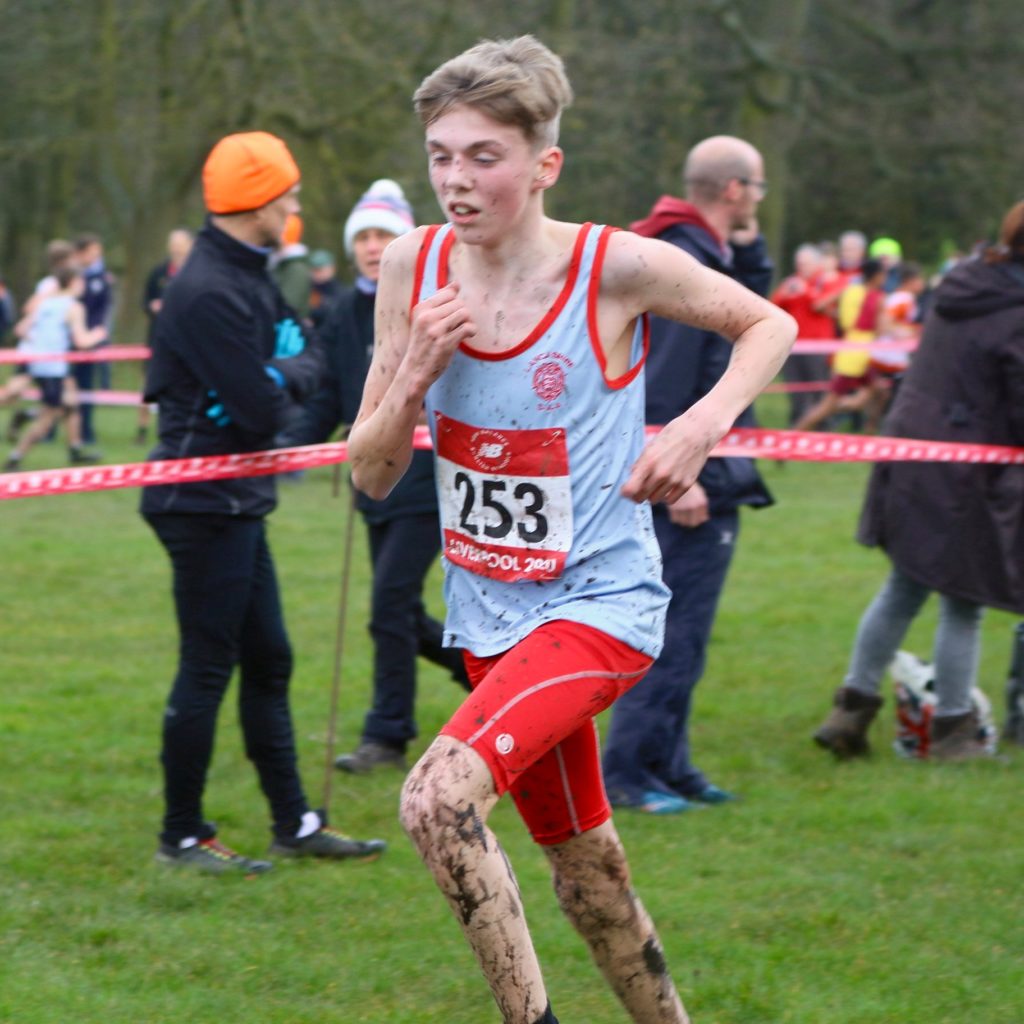 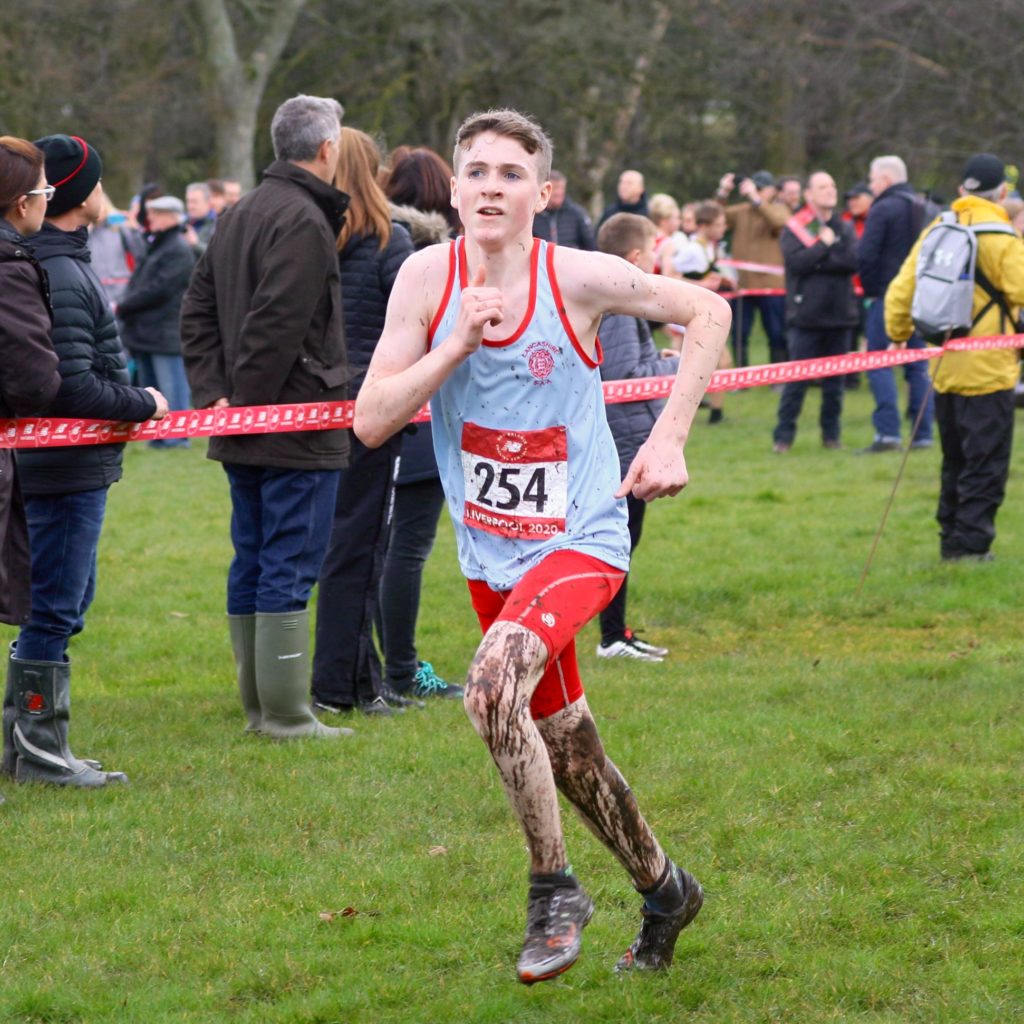 Bottom of age U17 Hayden Mercer has targeted the 600m over this Series and has improved by four seconds over the course of the races, clocking 1.32.45, followed by 1.30.08 and on Sunday setting himself another new PB with his time of 1.28.61. A delighted young athlete spoke to the Harriers afterwards commenting “it was a very good experience because I was running against the men who all had quicker times than me!”. 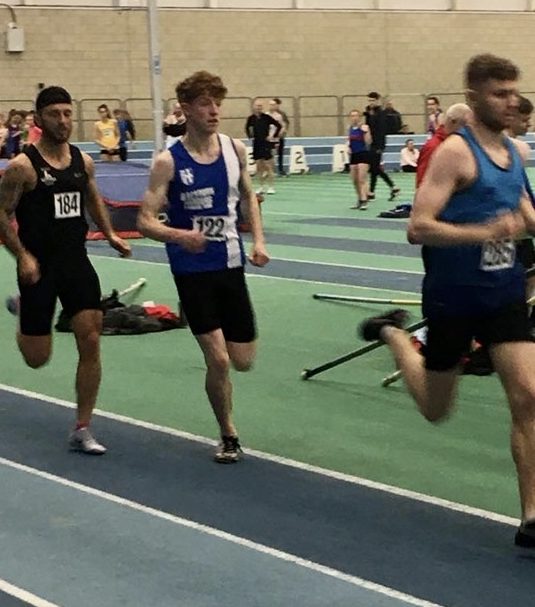 Next athlete to set a new PB was another bottom of age U17 – Rory Teare – who went into the indoor season with a personal best of 1.59 (outdoors) and 1.55 (indoors). At Sportcity, Rory set a new personal best height, clearing 1.65m, a clearance which was 10cms ahead of his 1.55m jump at the previous indoor meeting. Speaking to the Harriers after his competition, Rory told us that “I went to the event aiming for 1.60m and jumped a big PB of 1.65 so I am very pleased with my performance and will be aiming for 1.70 this summer season”. 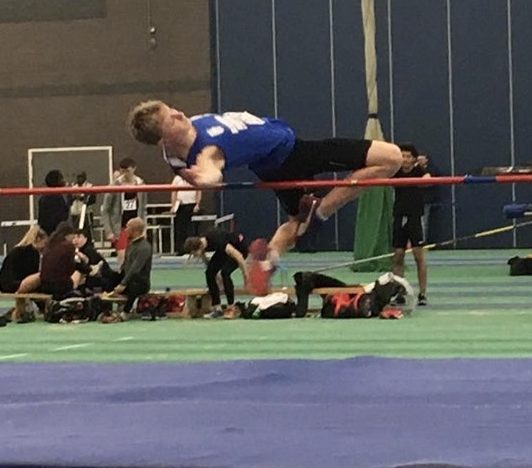 There were, as usual, two huge pools of Long Jumpers with 25 in each. In the second pool, the Harriers had three competitors which saw U20 Fawwaz Mustapha take on the event for the very first time, leaping out to 5.40m in 8th place. Then came U17 Stuart Yates in his first season for the Harriers and in his first ever competition jumping 4.73 in 16th position followed by U17 Imogen Mansfield in 20th with a seasons best leap of 4.46m.
Senior sprinter Brandon Zinyemba was two hundreths outside his personal best in the 60m clocking 7.25 for 2nd place in his Heat along with U20 Fawwaz Mustapha also taking 2nd place in his 60m Heat with a time of 7.48. U17’s Stuart Yates and Ben Boocock ran in the same 60m Heat which saw Stuart win a time of 7.74 which was his first ever outing over the distance with Ben just 0.05 outside his personal best, clocking 8.02 in 4th position. Ben Boocock also ran the 60m Hurdles and placed 3rd in a time of 9.26 – just 0.03 outside his best.  Imogen Mansfield had a very good run to set herself a new PB in her 60m Heat clocking 8.56 – her previous best being 8.72. U15 Thomas Monks was just outside his personal best by 0.04 for the 60m with his 7.91 clocking in 6th place.
Three of our athletes took on the 300m – all for the first time – which saw Brandon Zimyemba clock a good debut time of 39.20 followed by Stuart Yates who finished off a very good day for himself as he won his Heat in 40.30. Thomas Monks suffered a disqualification but was neck and neck with the winner who clocked 39.73.
On the same weekend – U17 Thrower Nicky Saunders – was down at the Woodford Green Throwsfest, opening he season with a win in the U17 Women’s Discus. In a mixed age group competition, Nicky headed the U17’s with her throw of 28.89m. (RESULTS)

The latest of the Podium 5k Races at Barrowford took place just a week before the 12 & 6 Stage Northern Relays scheduled for Sunday March 22nd at Birkenhead Park. On the night 80 athletes lined up in the A Race and 36 in the B Race. 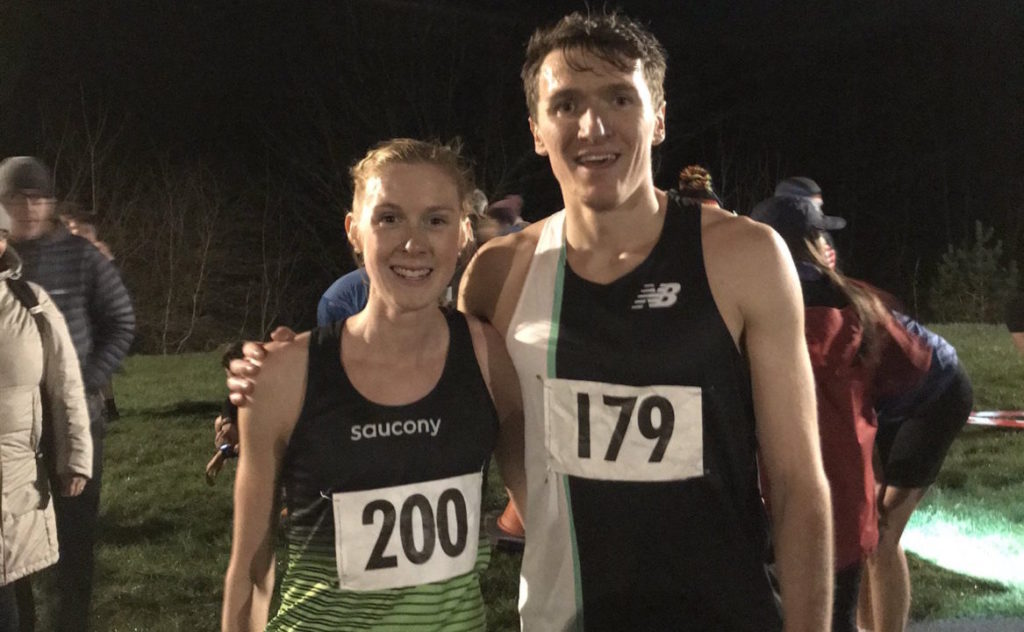 In the B Race Senior Blackburn Harriers Paul Bradshaw and Matt Nuttall were competing with Paul coming across the line with a time of 17.02 in 3rd place followed by Matt in 7th position in a time of 17.24 and 1st in his age category (V50). One of the Harriers Juniors – top of age U13’s Oliver Gill – ran as well and clocked a good time of 20.45 in 30th place – his first time over the distance in a road race.

Close to 500 ran in this race which is often used by runners who are looking to tackle the London Marathon. Unfortunately this year, that isn’t available for them as it has been cancelled but it didn’t stop the field of 467 in a race won by Salford’s Callum Rowlinson in a swift time of 1hr 46.49 with Trafford’s Tom Charles in 2nd (1hr 51.20) and Chorlton’s Matthew Shaw in 3rd (1hr 51.39). Blackburn Harriers V50 Jonathan Bridge had an excellent race coming home in 34th spot in a time of 2hr.15.21 and 2nd V50 on the day and also setting a new PB over the distance by over 2 minutes.. Jonathan spoke to the Harriers afterwards telling us that he was “delighted with my time which was an unexpected pb. Such a shame London is off because a sub 3 was possible”. 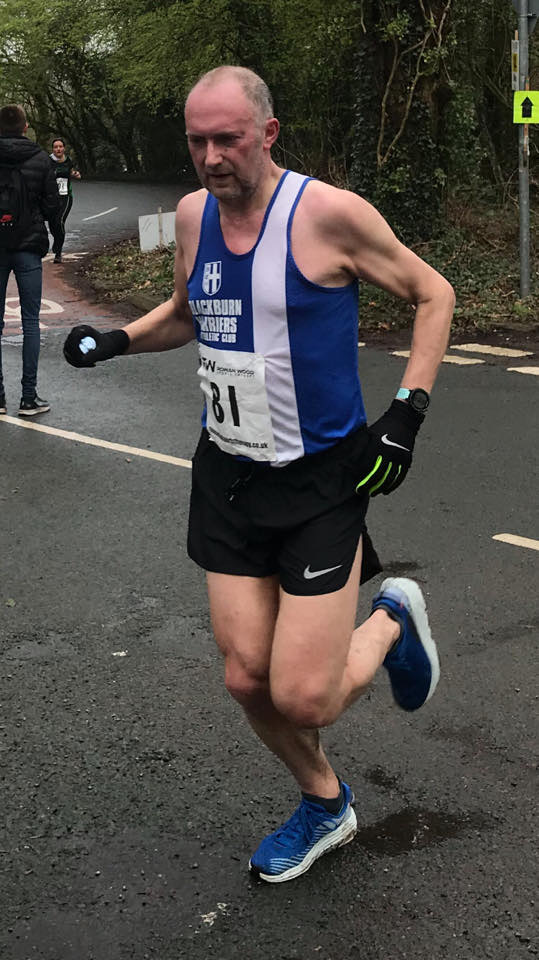 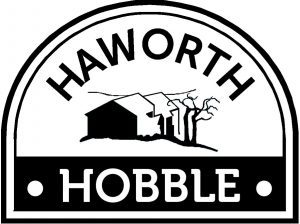 This is a tough race and not for the faint hearted covering 51k in distance and 1340m of ascent.Two hundred and twenty six finishers in this race won by Kevin Hoult ina time of 4hr 16.57, the same time being given to 2nd placed Ken Sutor!. There was a very good run too from the Harriers Craig Greenough who finished in 63rd spot with a time of 5hr 48.36 – just a week after winning a Duathlon. 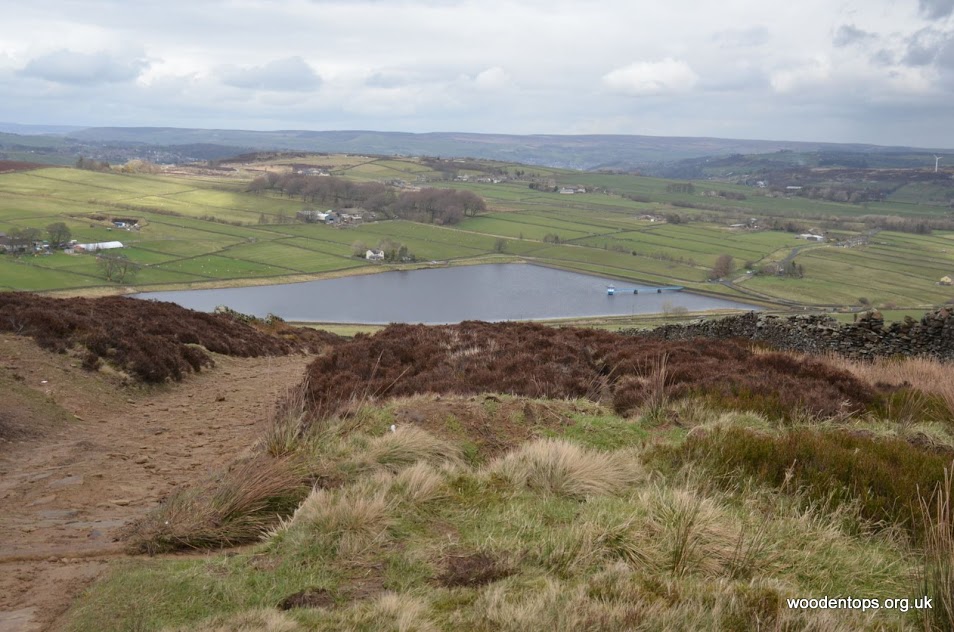 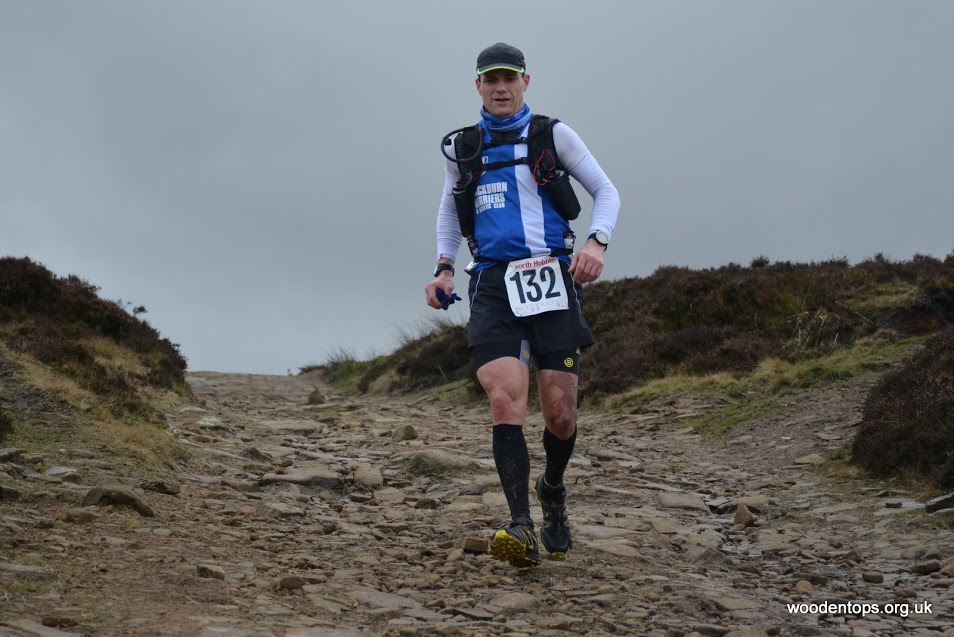