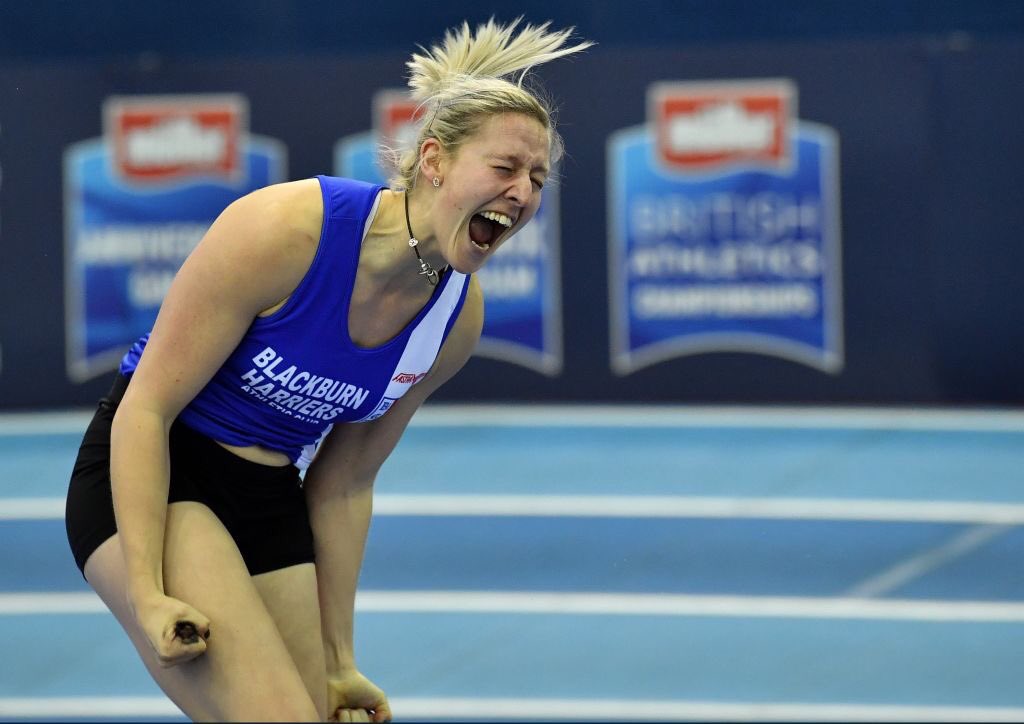 Holly Bradshaw has had a fabulous two weeks starting with winning her 11th British Title with a winning Vault of 4.80m two weeks ago and then following that up with a first time clearance of 4.81m to win the International Muller Grand Prix Indoor Meeting in Birmingham this weekend. In doing so, Holly was in front of Olympic Champion Katerina Stefanidi as well as world ranking pole vaulters – Katie Nageotte and Nikoleta Kiriakopoulou and puts Holly to number 3 in the World Rankings. 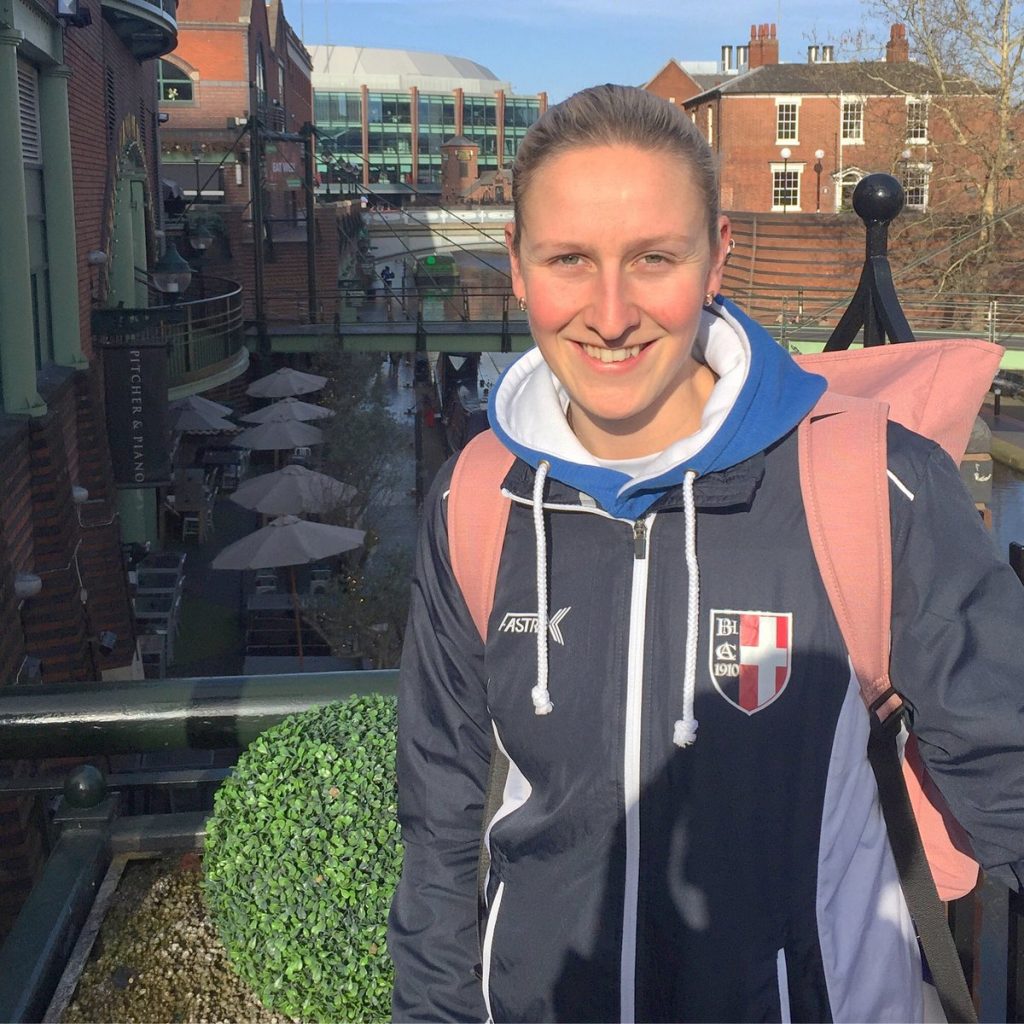 After the meeting ended, Holly spoke to the Club telling us “To get another seasons best and jump 4.81m which is my 2nd best height ever was super exciting, especially in front of a home crowd. I just feel very grateful that everything for me is coming together after years of injury and struggles. I’ve managed to stay healthy and put together 18months of training and that’s really the only difference. I am faster and stronger then ever and that’s why I can compete with the best girls in the world from a shorter approach. I’m excited to see what happens in Glasgow now! Another home crowd getting behind me…I’m just looking forward to it so much!” 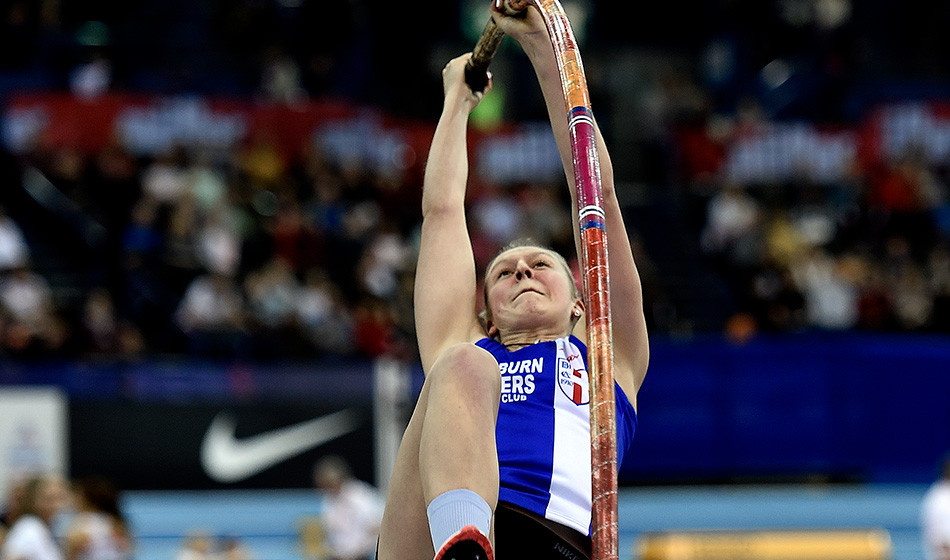 A big field saw six hundred and thirty three finishers in this 20 mile race won by Matthew Richards in a time of !hr 52.59. Blackburn Harriers Rachel Wood had a very good run in preparation for running the Boston Marathon as she placed 2nd in the Women’s Race clocking 2hr 12.50 behind the winner Charlotte Firth (2.06.02). Rachel’s run was a minute faster than her previous best and setting a new PB over this distance was a great effort.

Rachel was asked by the Club how she found the day and her race and she told us “I ran the Bramley 20 mile race on Sunday 17th February in preparation for Boston marathon on 15th April 2019. 20 miles is the longest run in my training plan so far and so i thought the race would be a good test of my fitness at the moment. It was a two lap course and I gradually moved through the field overtaking 3rd and 4th place at around 15 miles. I finished 2nd female overall in a time of 2.12.50. This is a pb for me and it has given me confidence going forward in my training!“ 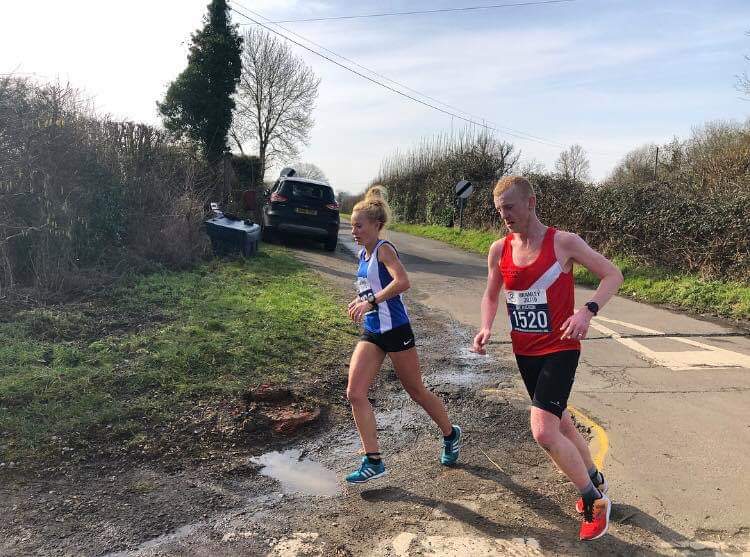 Jonny Kay from Bolton won this race, featuring one hundred and thirty four runners, comfortably, in a time of 15.35. Carmen Byrne (V40) contested the race for the Harriers and finished with a time of 20.07 which was good eneough for her to th take the 1st Women’s Prize and V40 Women’s Prize.

Speaking to the Club, Carmen commented “It wasn’t fast, as I’d had to get up at 5am to manage my food properly, so ran strongly until last k, where usually I can pick up pace a lot more, but today despite a mid race snack i slowed up. My 20.07 also included a decent climb and few undulations. Am going to look for a few more 5ks but flatter and with later starts

. It was still pretty enjoyable though”. 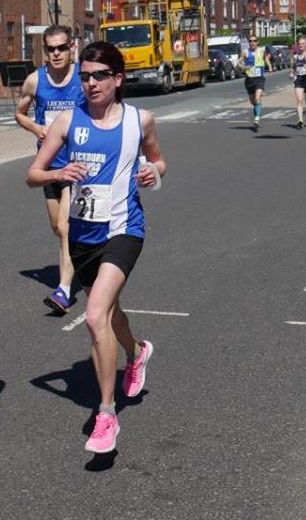 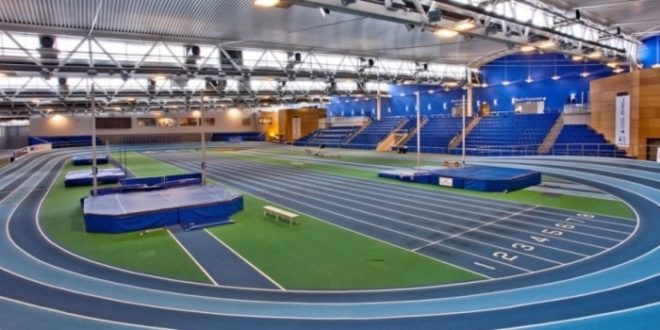 U15 Hayden Mercer ran the 600m at Sportscity in December 2016 and clocked 1.34.44 in the U15 Race. At the weekend he finished up running in the U17 race – crossing the line in 3rd place – which was a learning experience for the young athlete and afterwards he told us “I had a slow first lap and realised that I was lacking in pace. I accelerated on lap 2 and on the final lap to overtake 2 other competitors. My time was 0.12sec off my PB which I am pleased with after all the winner was an U17 runner! 3rd today in a time of 1.34:56″. 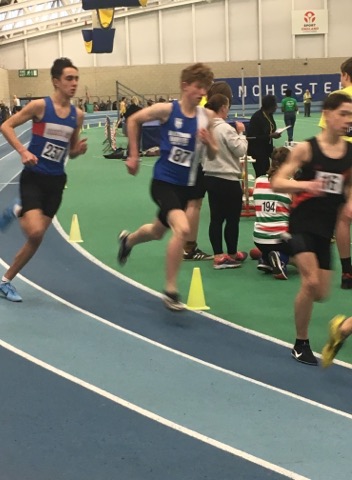 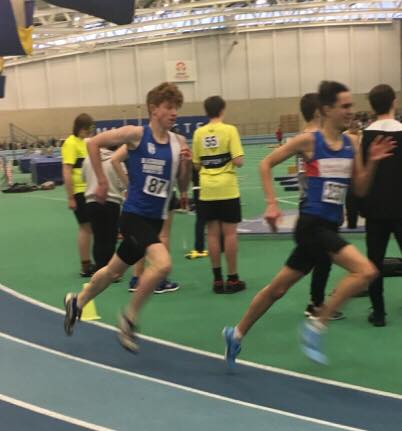 The race starts from Bleasdale Parish Hall, heading north on the road for 200 metres where a cattle grid is crossed before the route leaves the road and crosses farmland for around 1500 metres, likely to be wet and muddy, passing Bleasdale Circle and on to Higher Fairsnape Farm. A farm track now climbs gradually for around 1500 metres to the fell gate. The route then climbs steeply, on rough grass and with some rocks that may be concealed, to reach Paddy’s Pole, check point. From Paddy’s Pole the route descends gradually on a fell path, grass/rock, before climbing gradually to Parlick, check point. From Parlick the route descends steeply, mainly on rough grass with some rocks that may be concealed under grass and reeds. The route then leaves the open fell descending on farmland and tracks past Blindhurst Farm and continues on a track then farmland for the final 2 km. 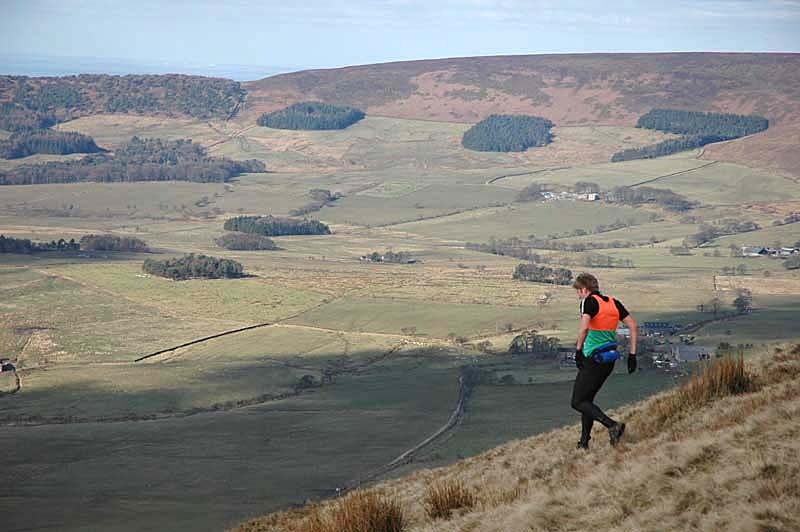 One hundred and twenty five finishers in this Fell Race won by Oliver Heaton in a time of 37.39. Two Blackburn Harriers ran on the day which saw John Horrocks taking another top ten place on the Fells, running a time of 40.04 in 7th spot. Afterwards, John reflected on the race commenting “Bleasdale Circle. One of my favourites of the shorter fell races. Brilliant day for it as it’s normally blowing a gail and throwing down every time I’ve done it in the past! Had a good climb and decent but died on the last half a mile through the fields back to the finish and lost a couple of places. Fastest I’ve ever run the race so I’m happy!“ 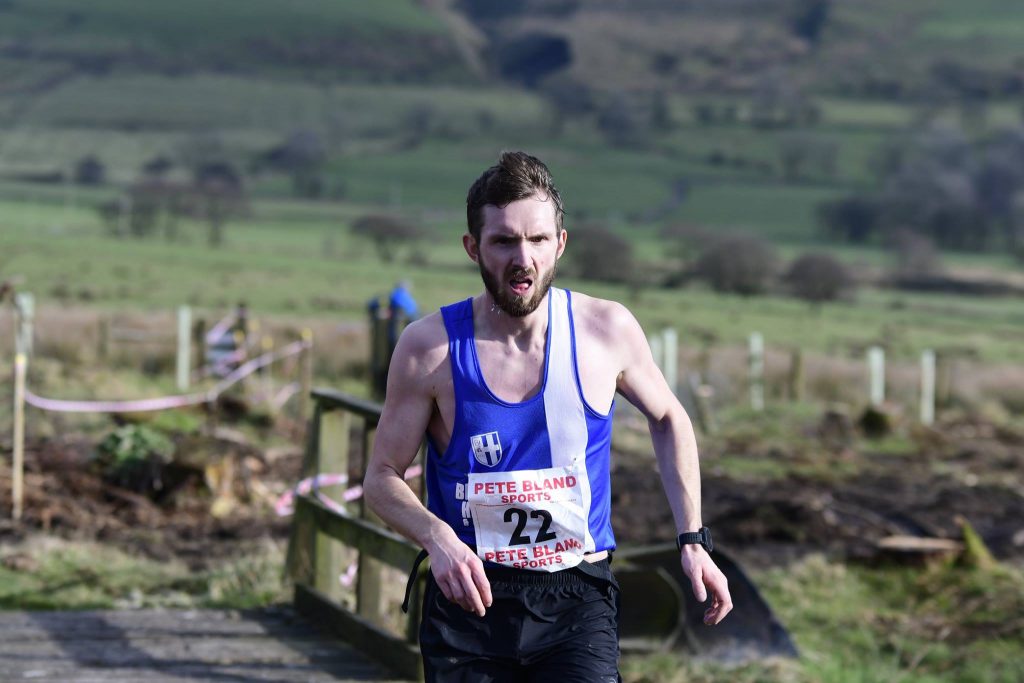 Richard Taylor placed 108th (59.47) which was his first outing on the Fells for quite a while and he told the Club after the race fiunished that “Bleasdale is a cracking race and venue that I’ve ran with Jackie in the past. In 2009 when I first raced it I was 10 minutes quicker, despite a wrong line off Paddy’s Pole in the clag costing me a minute or two, so I’ve lost around a minute per year. But I still enjoyed yesterday. Blue sky, great views and a friendly bunch of fellow runners and hope to claw back a few of those lost minutes this spring. Thanks to Bowland Fell Runners or putting on a super little event” 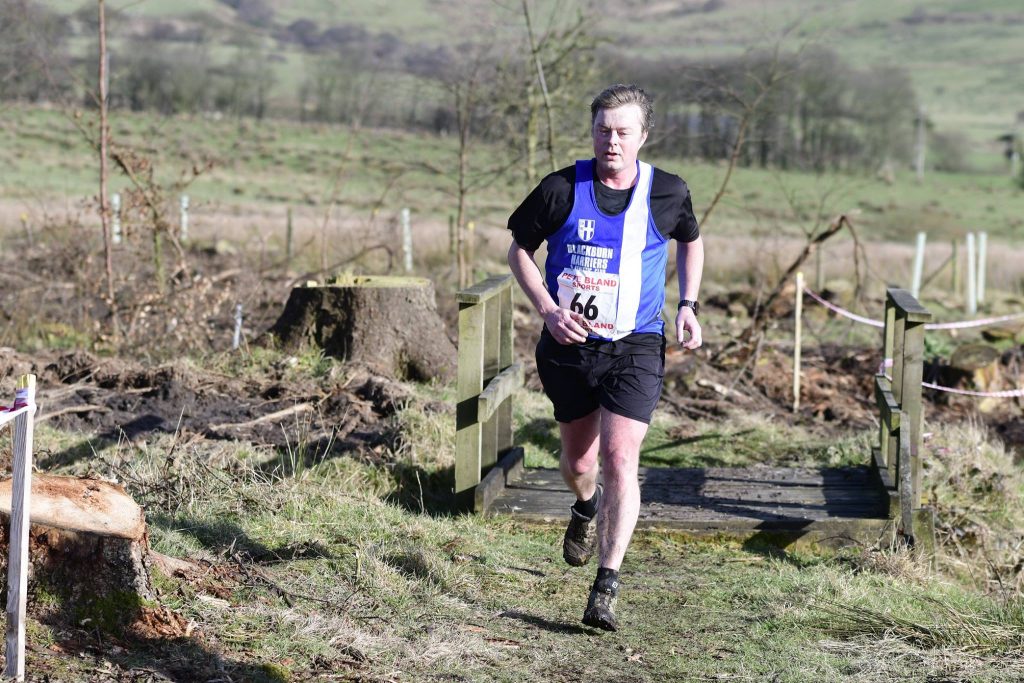 Over 900 finishers in this wind affected race won by Grant Johnson in a time of 70.37. Calum Holmes came home 10th overall in 79.28 and there was little doubt that everyone’s times on the day had been affected by the conditions, with the wind blowing strongly off the sea. 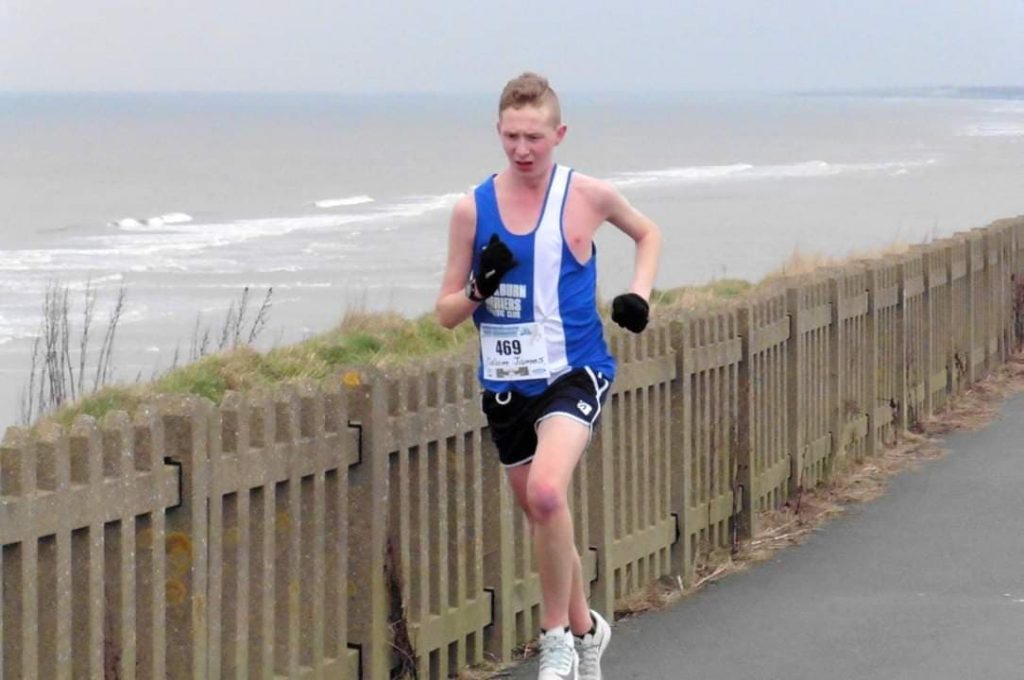