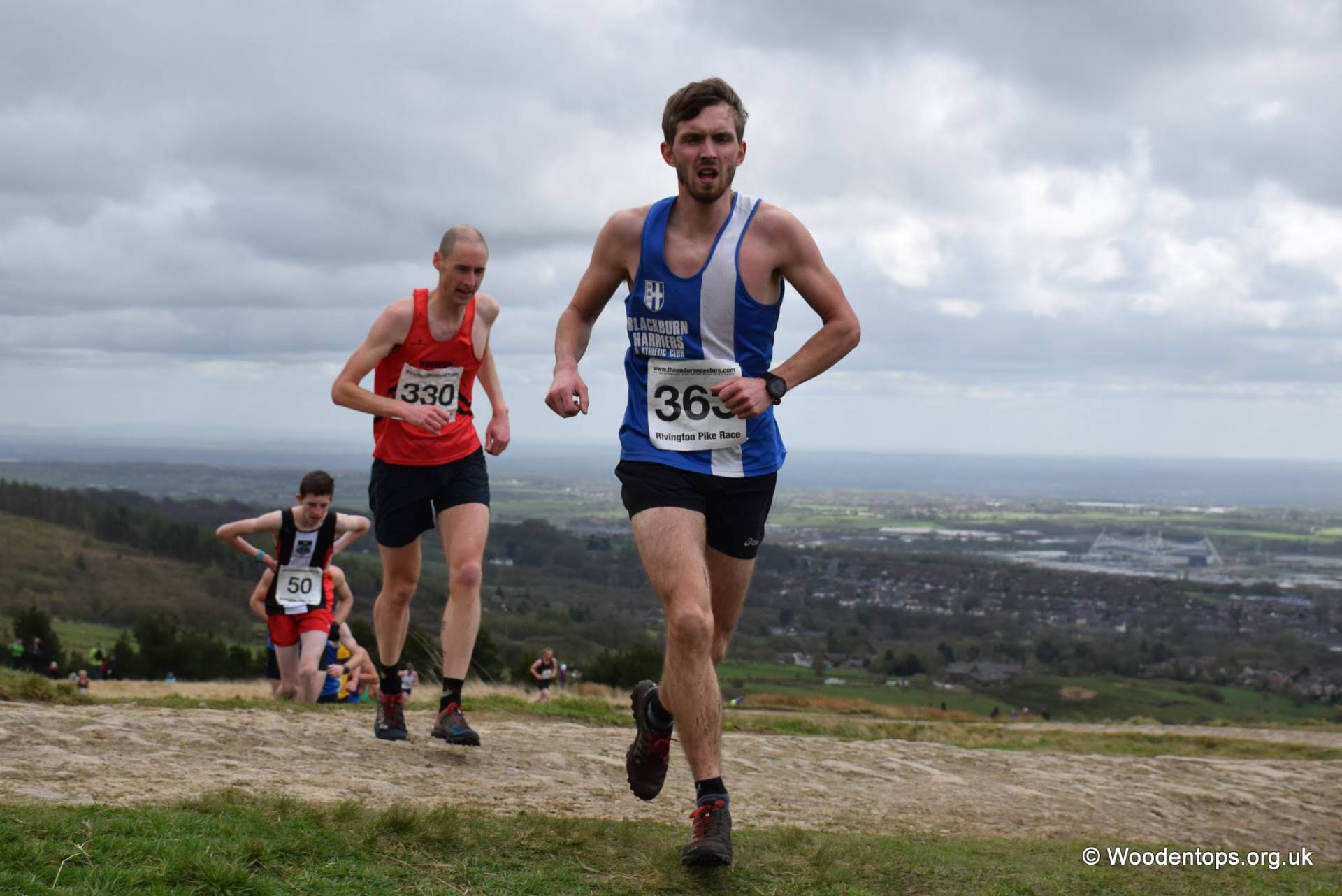 At the Good Friday Salford 10k there was a good turn out as always – even with not the best of weather conditions there were five hundred and ninety nine runners finishing – the race being eventually won in an excellent time of 30.49 by Marc Brown. Six Blackburn Harriers out on the day with three of them all recording new PB’s. 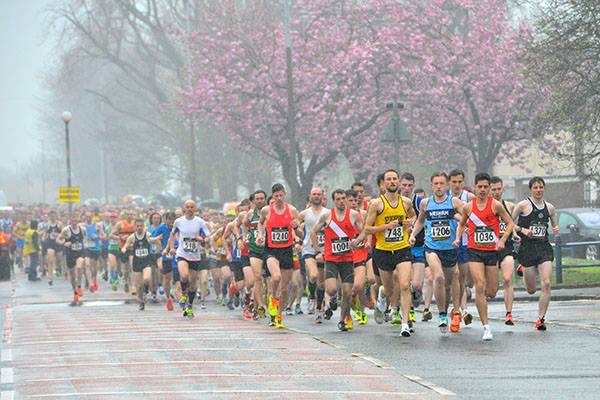 Joe Monk was the first athlete home for the Harriers in 16th place in a new PB time of 32.10 and was also the 2nd Junior Man in the Race overall. Having already run 32.17 in March, Joe was looking to run faster and did that commenting to the Club after the Race that “This was my last 10k before autumn to get a PB, and hopefully sub 32. Legs felt great and went through 5k in 15:38, just 4 seconds off my 5k best, and splits were very consistent. Started to drift off the pack and managed to salvage a 1 second PB. I know I have it in me to run sub 32, hopefully well be well under that come Leeds in November“. Sub 32 is definitely on the cards for Joe. 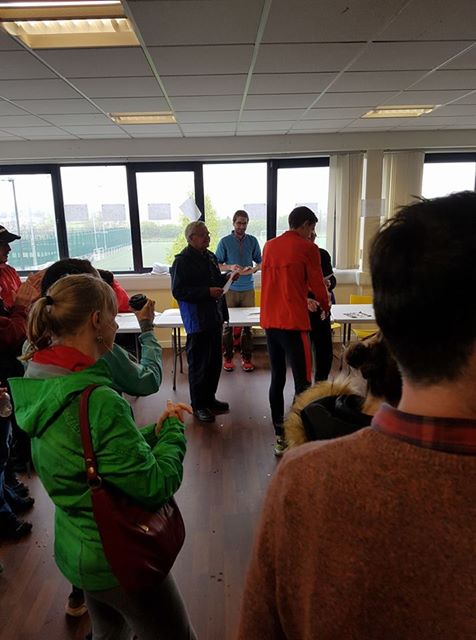 Next home came Tom Blaney in 35th place posting a very consistent time of 33.54 who told the Club “After a decent run at Trafford i thought i’d attempt a sub 33 here, the first 5k went great i felt strong and went through at 16.25 just as planned. Mile 4 was a bit slower but i put it down to slight undulation, at mile 5 i felt like death and just could not hold on, i’m not quite sure what happened, i’ve put it down to the fast start. In the end i managed to salvage a sub 34 and will hopefully give it another go in autumn but for now i just want to concentrate on training and enjoy racing instead of looking for pb’s as this served me very well during the cross country season. Well done to the rest of the Harriers today there were some really good quality times produced!“

Ben Costello had a great day when he smashed his PB to pieces. His previous best of 35.57 at Accrington earlier this year was reduced by a massive one minute and 29 seconds when he posted a new PB of 34.28 finishing 45th overall. Absolutely delighted Ben told us “Going into the race I had never felt so physically strong and fast so I knew a good run was on the cards. The weather wasn’t the best but that didn’t stop me I got my head down with a quickest first 2 miles and backed off on mile 3 and 4 to push myself in the last quarter of the race which worked. Well done to all the other Harriers who ran today” Next home for the Harriers came V45 Paul Guinan in 64th position with a solid time of 35.35 followed by Carly Edwards.who posted the third new PB of the day for the Harriers when she placed 218th in a time of 42.47 – forty eight seconds faster than her previous best. Carly was very happy with her run, telling us “I’m really pleased with my effort. I set off comfortably and tried to work my way through. I generally run better on hilly courses but this is something that I need to work on. Despite a few recent knock backs I am pleased to be getting my mileage back up and running well. I am more determined than ever to keep working hard. I know that I am capable of that 40 minute 10k one day. I’ll just keep working until I get it”. Carol Reilly….who has had a difficult year and longer through injury, is back in training and was on the Track for the first time in a year a couple of weeks ago. Carol had a great run in 267th position with a time of 44.42 – just three seconds slower than her PB. No doubt that personal best is going to go soon and she told the Club “My goal today was to feel strong and confident as I’ve not raced much in the last 12 months due to both of my Achilles. I’m glad to say that I achieved this and actually finished in my second best 10k time of 44.42. Would love to get it down to sub 43.0 at some point. You never know right place, right time and all that. Anyway I’m feeling more positive and providing i continue to take care of my Achilles I’m hoping to improve throughout the year. Great running from all my fellow Harriers and thanks for the shout outs”.

Three hundred and seventy one finishers in this years Rivington Pike Race won in good style by Chris Farrell in a time of 17.27, twenty seconds in front of second placed Chris Richards.

Just three Blackburn Harriers out on the day which saw new member – John Horrocks – make his debut for the Club and running a very good Race in 26th position (20.37). John spoke to the Club after the Race saying “My first race for Blackburn Harriers and my first at the Rivington Pike Fell Race. It was a great atmosphere up and down with a lot of people watching the race. My aim was to get under 21 minutes which I managed so I was pleased with my run”. 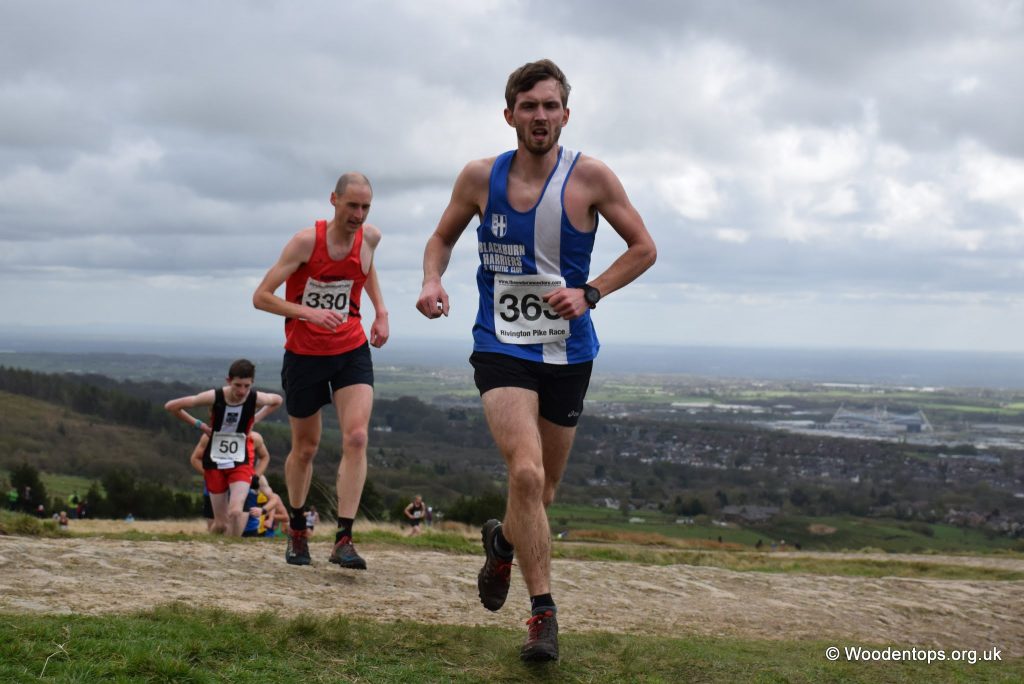 Next home was Andy Heys having a pretty solid run in 57th spot and posting a time of 22.30 who spoke to the Club after the Race and said “My first outing at this iconic and historic race. Felt strong to the top and was able to grab a few places on the fast descent down from the Pike. A really enjoyable race that was well supported throughout – thanks all for the shouts of encouragement. I’ll definitely be returning for more in the future”  – and it was great to see Alison Armour back running for the Harriers finishing 333rd in a time of 35.05. Speaking to the Club Alison commented “this was my first fell race for nine years and any race for 2 1/2 years. I was pleased with the climb, the atmosphere was great with lots of encouraging shouts but my descending was diabolical. Anyway plenty of room for improvement for the next race”. 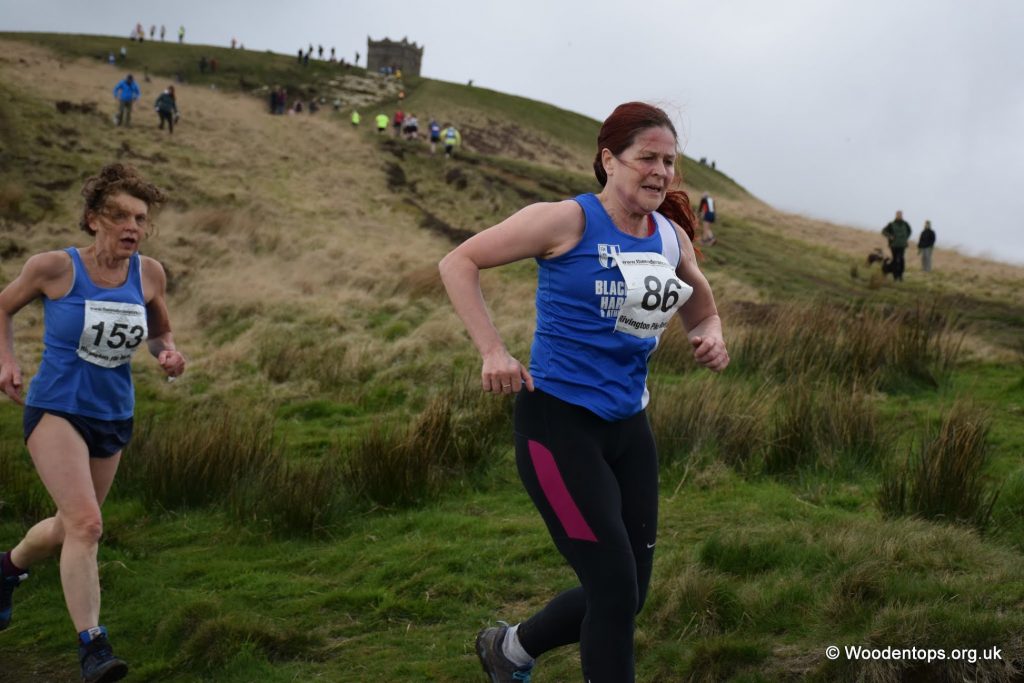 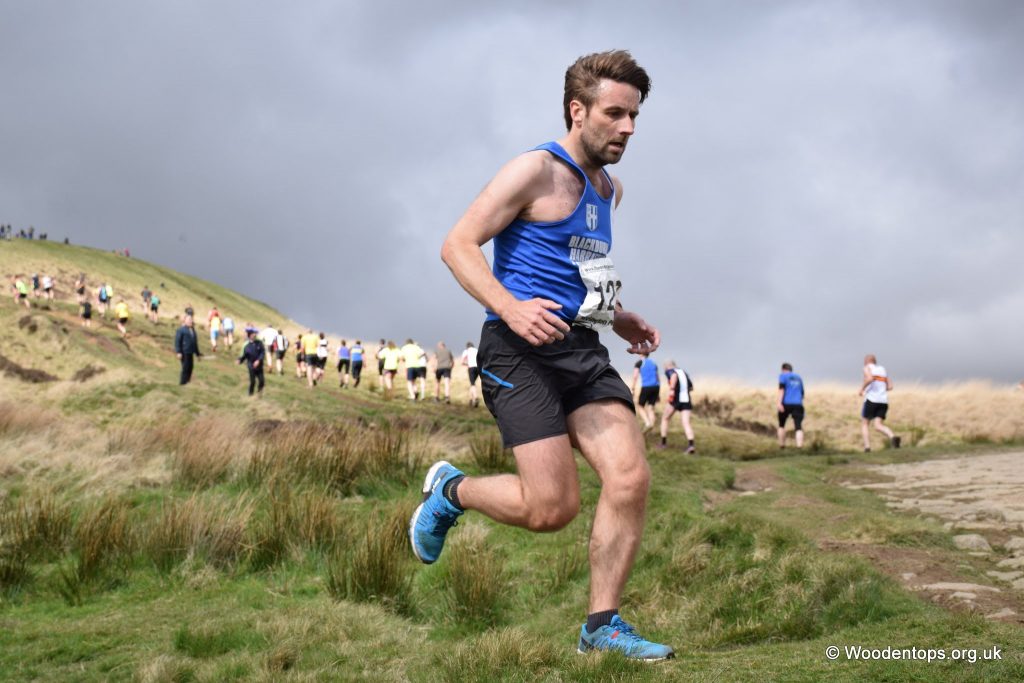 It wasn’t ideal conditions on Sunday to say the least!  – the bike and run parts of the race being particularly bad with many athletes recalling how they couldn’t feel any parts of their body on the bike and run stages – in the end one hundred and eight eight triathletes completed the event won by Sam Wardle in a time of 1hr.32.58.

The Race included five members of the Harriers with the first one home being Richard Stones in a very good 6th place overall and recording a time of 1hr 36.21 and probably the only athlete in the field who thought the conditions ‘helped him’ commenting “I was really pleased with my performance yesterday. I think the conditions suited me as I usually struggle in the heat. I’m just glad all the cycling I’ve done this winter is paying off and now looking to put in some good performances at longer distances later in the year. Well done to the other guys too!”    Just two places behind in 8th came Jack Hindle (racing for Fitt on the day) in a time of 1hr 37.46 who commented, like others who had to endure the environment “Horrendous conditions yesterday. Had a good swim and was feeling strong on the bike. Made the mistake of not putting an extra layer on for the bike. Meaning towards the later end of the bike I was frozen, couldn’t hold onto the bars and couldn’t put any effort in. With regards to the run I had to jog as I just physical couldn’t move any faster, shivering and not in a good place. Not a true reflection of my fitness, but a big lesson learnt. Well done to Rich and Paul, an achievement to finish in yesterday’s conditions”. Paul Slone was next home in 26th place with a time of 1hr 48.55 which won him the 1st V50 prize. Notwithstanding the weather Paul was happy with his day and told the Club “The weather conditions hampered the race somewhat. The driving rain made the bike leg the most difficult conditions I’ve ever rode in. Only felt the cold after 9 miles from the top of Jeffrey hill. The long fast descents from there on after really had an effect on the core temperature also numbing the hands feet. It was pretty dangerous. Transition was tough struggling to get wet cycling shoes off and wet trainers on with numb fingers. Running with completely numb feet was a new one too. Glad to see the back of the race really. First age group win MV50 so was very happy in the end!“

Richard Fogarty (racing for Fitt on the day) was four places further back in 30th overall, posting a time of 1hr 49.45 and commented after the Race “I was reasonably happy with the swim and bike but the tough weather conditions during the bike got to me and I could hardly feel my body during the run and just couldn’t get into it. Was good to get another race under the belt though!” V45 Craig Greenough came home in 59th spot and completed the swim/bike/run event in 1hr 57.02. 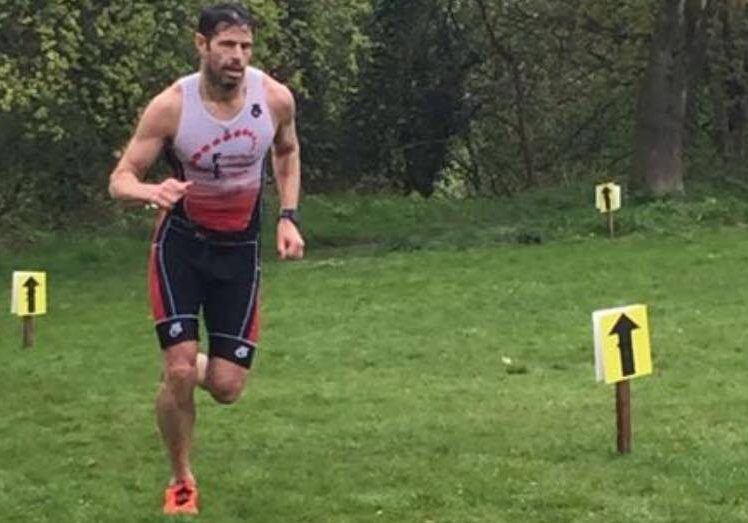 U20 Joseph Howe was over in the Isle of Man at the EASTER weekend competing in the annual Festival of Running – an event that consists of a 10k Race, a four mile Hill Race and a 5k Road Race. With over two hundred entries in each event and nearly one hundred and fifty competing in all three, it proved to be a pretty good weekend and none more so than for Joe.

Joe contested all three Races and put in some very good performances which saw him finish 21st overall in the three race series and 4th U20 Male. In the 10k Race on Good Friday Joe finished 34th out of 296 runners in an excellent and massive new PB time of 34.47 – nearly a minute and half faster than his previous best. On the Saturday Joe finished 22nd in the 206 strong Peel Hill Race field with a time of 22.55 and finished the weekend off in the 5k Road Race on Sunday coming home in 35th spot in a time of 16.43 – just 13 seconds away from his previous best. Afterwards, Joe spoke to the Club about the Festival saying “It was a cracking weekend and I had a lot of fun. The event is so well organised and I was pretty pleased with my three runs as well. It’s going to take a bit of time for me to recover now though”. 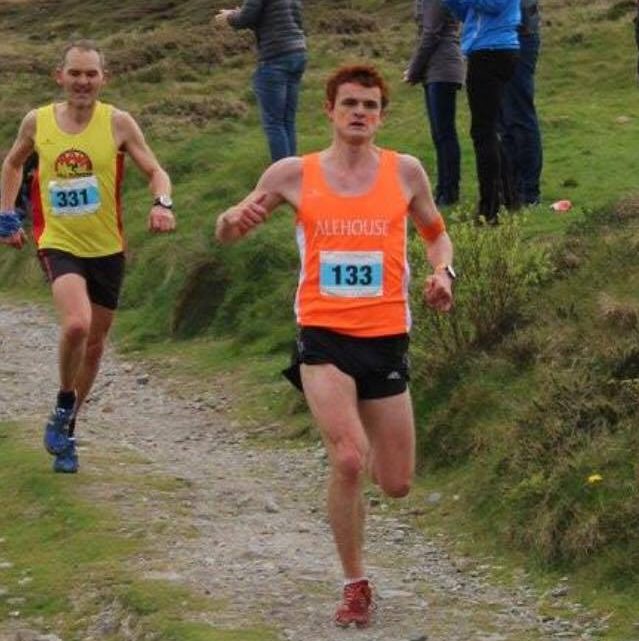 U15 Harry Wilkin popped over to Hollingworth Lake and ran the 5k Race there to finish 33rd in the two hundred and thirteen strong field. Harry’s time was a very consistent 20.24 which was only just short of his personal best (20.11). 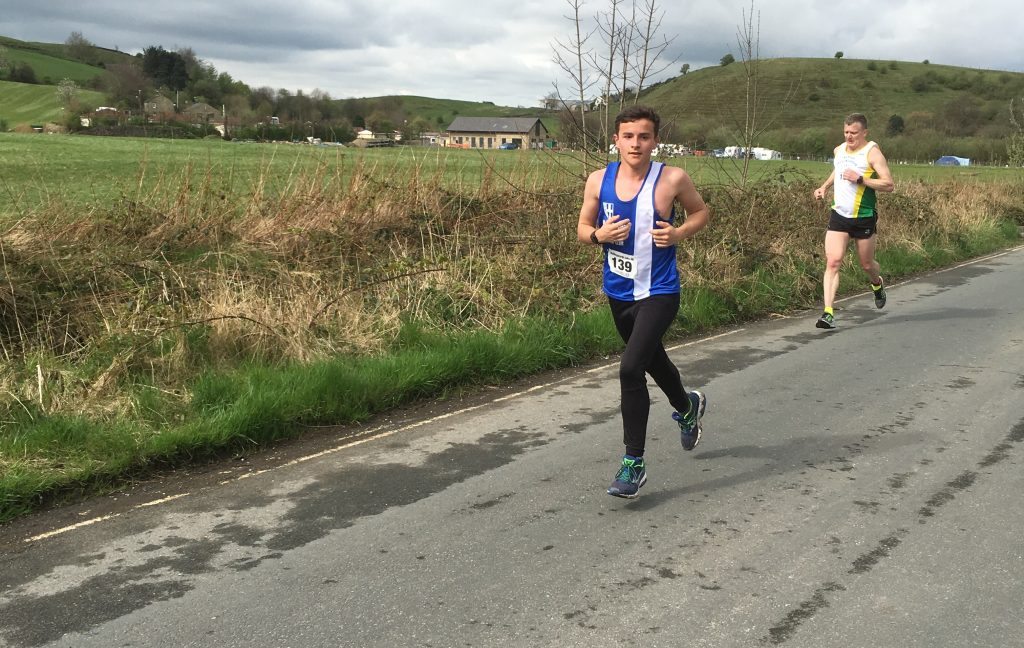 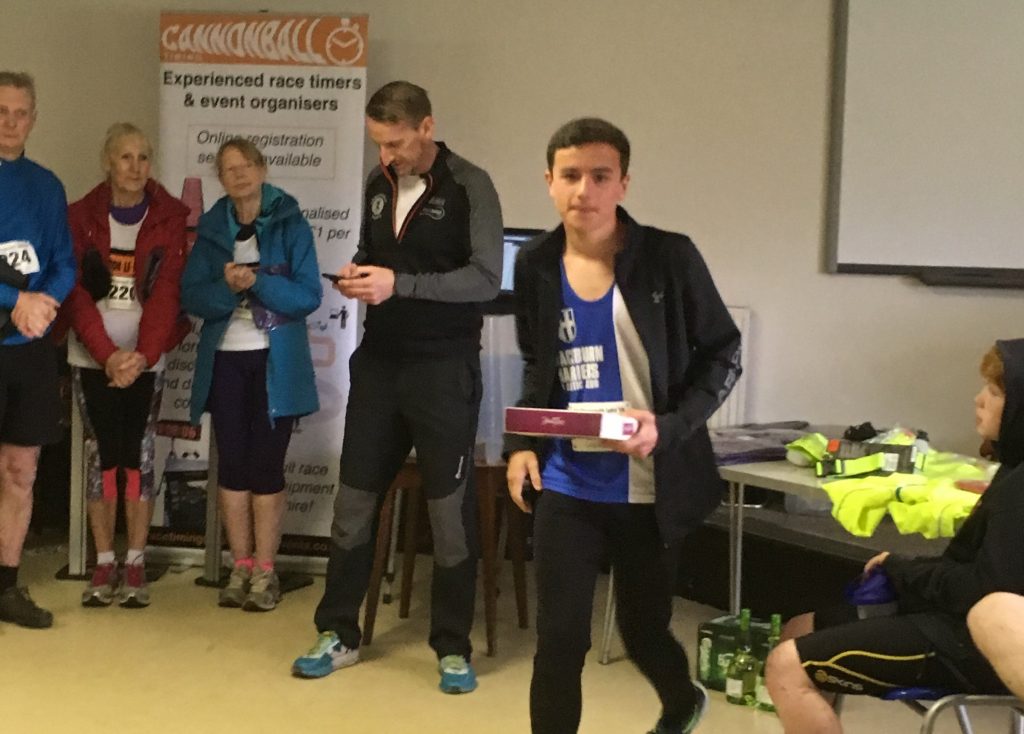 (Harry picking up his prize for 1st U16 Male)