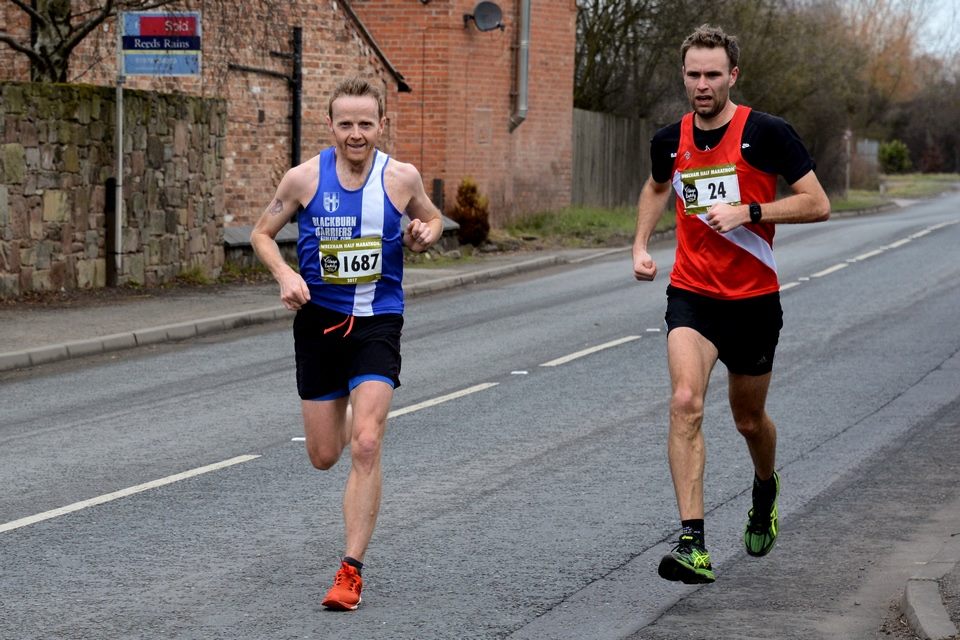 The Annual Bucs Championships took place in Sheffield last weekend with a number of Blackburn Harriers competing for their respective Universities and setting new personal bests. 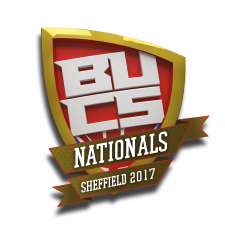 Joe Monk had won the Steel Cup 3000m at the beginning of February in 8.59.13 and then the Valentine’s 10k in Lancaster with a time of 33.05 on February 11th. He was confident that in a good field at the Bucs he could run faster – and he did in his Heat, cutting nearly eight seconds off that previous time to record a new PB of 8.51.26, placing 5th overall. After the weekend Joe told the Club that he was “Really chuffed with the race, off just one session done at quicker than 3k pace, looking forward to running at Trafford this summer to see what I could run“.

Roxanne Oliver was another Harrier who had contested the Steel Cup placing 4th in the 60m Hurdles (9.32). At Bucs she set a new PB of 9.18 when she finished in 5th place in her Heat and was in an upbeat mood after her event commenting to the Club that it had been a “Great experience racing with some of the best hurdlers in the country. I’m happy to come out with a PB but still feel like I could produce much better times. I’m excited for the season ahead”. Katie Buckingham was in action in the 800m placing 6th in 2.33.67 setting off too fast as she tried to stay with the ‘ridiculously fast pace’ that had been set’ but in the 1500m she set a new PB of 5.12.85 by half a second over her previous outdoor 1500m time and told the Club “Great experience to race with the best runners in the country, really pleased to come out with a PB off injury, hopefully with training quicker times will come!!!“ Given that she has been out with injury and her first time over the distance Indoors, it looks as though there is going to be a revision of her outdoor 1500m time this season. Joe Pearse qualified comfortably for the High Jump Final with a clearance of 1.98. Having recently cleared 2.08m he went into the Final full of confidence. However, as sometimes can happen in technical events, the Final didn’t go as well as it might have done and he came 6th int the field of 12 with a clearance of 2.01m telling the Club “Although I made the final, it wasn’t to be this year. Disappointed but hopefully will bounce back ready for the outdoor season”. Big Jump coming up for Joe as he is certainly capable of it. 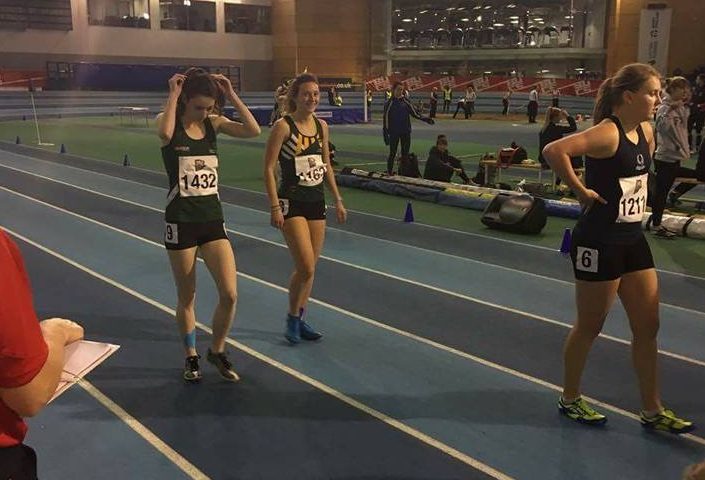 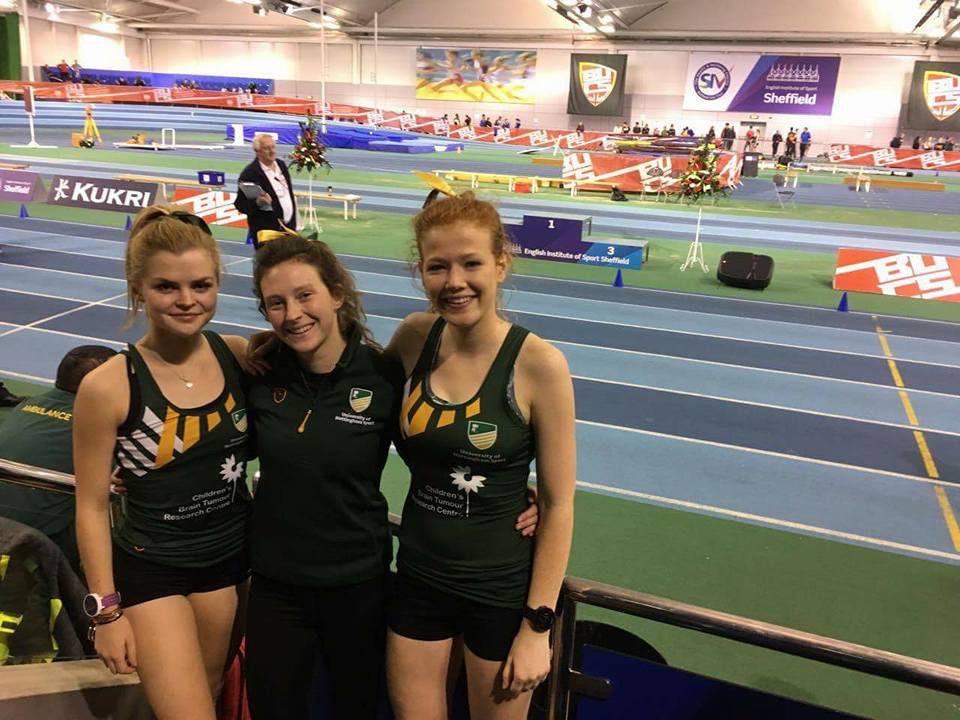 Fourteen hundred and 22 finishers in this Half-Marathon which saw the first three athletes all get under 70 minutes with the winner, Patrick Martin posting a time of 67.56.

Shaun Livesey had a very good run, just missing a new PB by seconds when he came home in a time of 74.27 and took the 3rd V40 spot on the day as well. 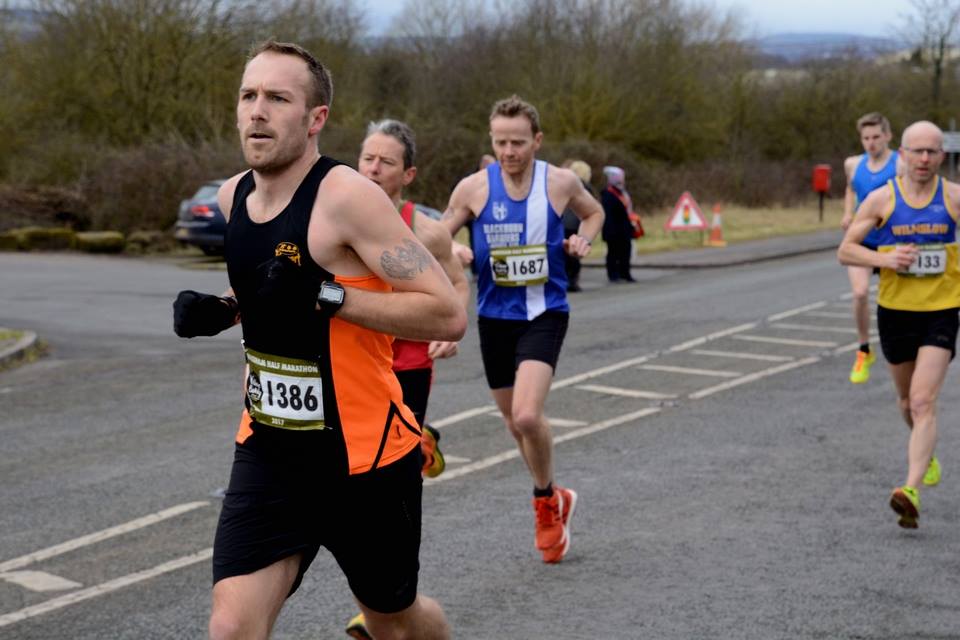 After the Race, Shaun reflected on the run, telling the Club “It was only the week before the race did I decide to enter. It was to be my first road race of the year and following my reasonable effort at the Ribble Valley backed up with 6-7 weeks good milage I thought I needed to see where I was. I like to set myself a target and decided that 75mins would be acceptable. I started well and the first few miles were really comfortable at this stage of the race i must have been placed 40th, I didn’t panic I was on pace running my race. It was a the four miles point I made contact with Tom Cornthwaite who at this stage was having trouble breathing, I had a chat with him about maybe stopping but he said he had never dnf’d ever. After I had made contact with him he got a second wind and we both helped each other push on, taking places as we did. We both went through the 10m mark at 56:15 fourteen seconds slower than my 10m pb and I knew at this point a good time was on. The last few miles were tough with a slight incline and a headwind, but Tom took up all the running. We made the final turn and he started screaming at me to empty my tanks to the finish. I finished 17th overall 2nd vet 40 and a time of 1:14:27. I owe a massive thank you to Tom for keeping me focused when it started to hurt because Tom is the epitomy of how to hurt yourself when it comes to racing”.

Sixty eight runners in this popular local 5k Race including four Blackburn Harriers and won by Joe Hudson in a time of 16.12. 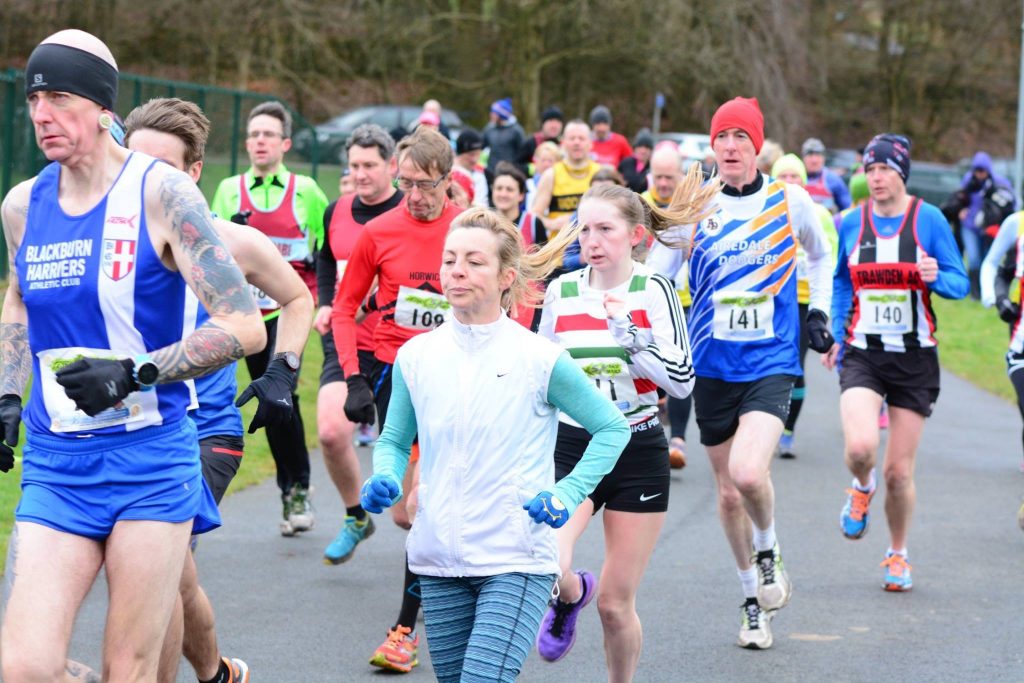 Matt Nuttall was the first Harrier over the line in 12th spot with a time of 17.40 and was also the 1st V45. Given the wind on the day, all times were  a testimony to the strength of the athletes. Andy Heys who had run the Bleasdale Circle Fell Race, won by Chris Arthur (34.56), the week before finishing 37th in 47.55, was next home in 22nd spot (19.01) followed by Bryan Searby (38th) with a time of 20.57. Just one place in front of Bryan in 37th (20.51) place came U15 Harry Wilkin who had run the Mid Lancs XC fixture the day before at Rossall and did this race to help raise money with his parents who also ran for Cystic Fibrosis. Well done to Harry for that. 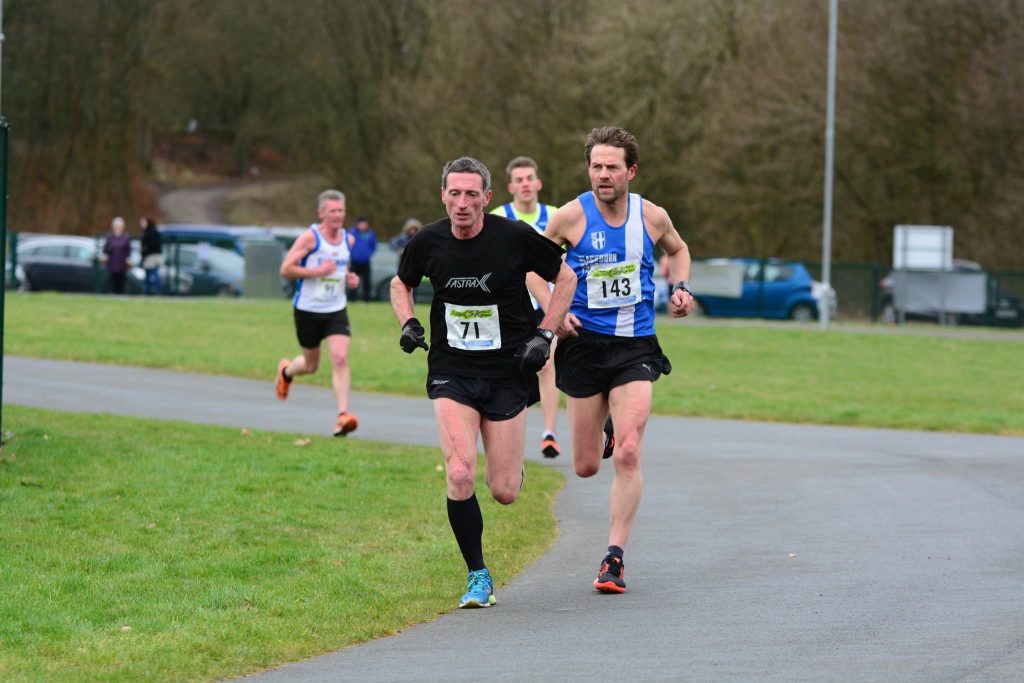 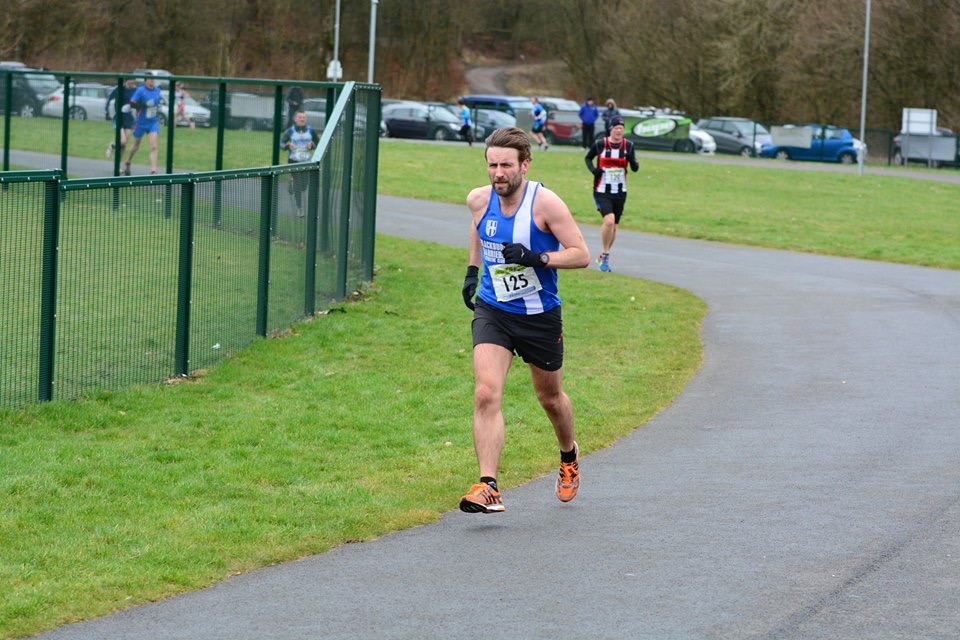 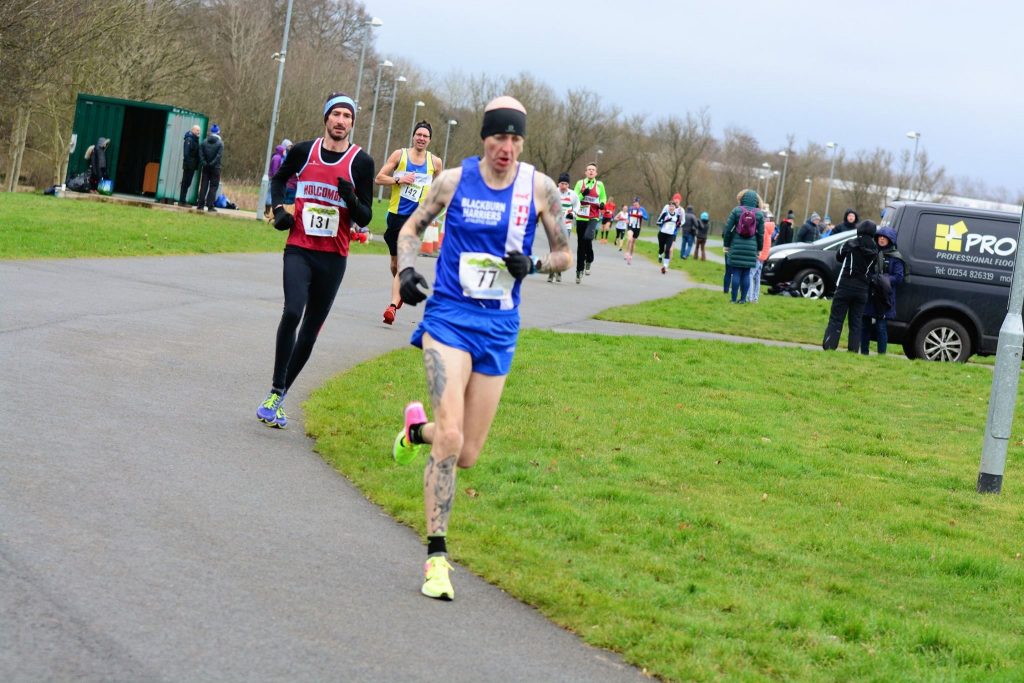 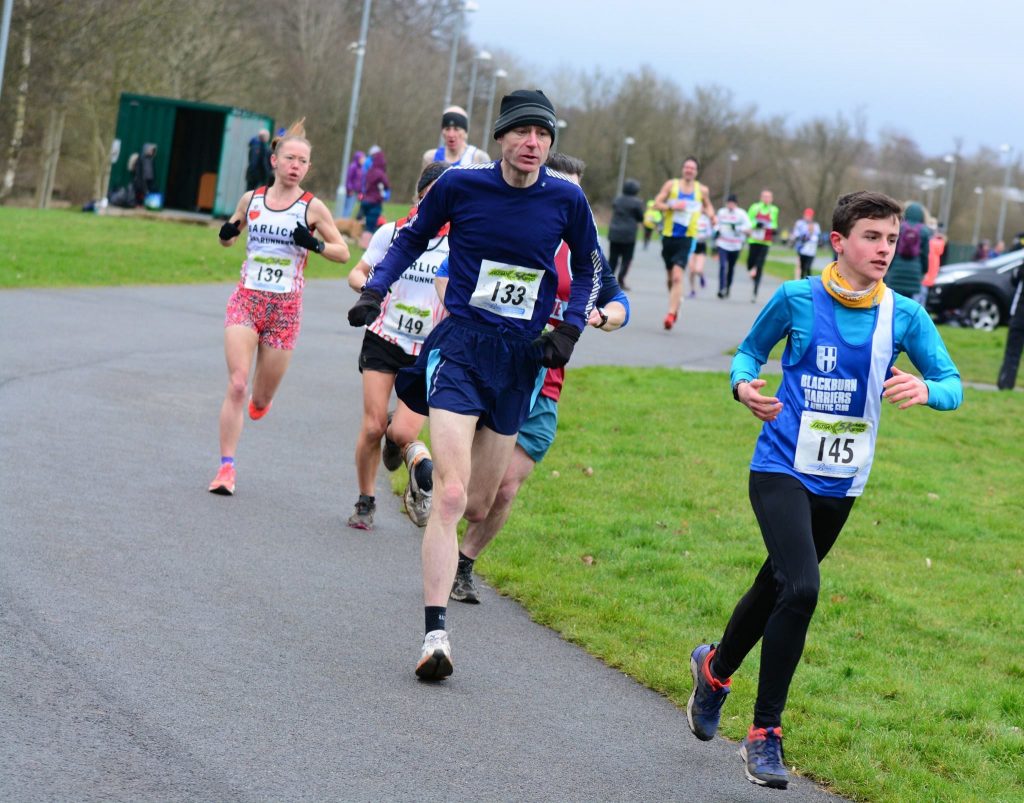 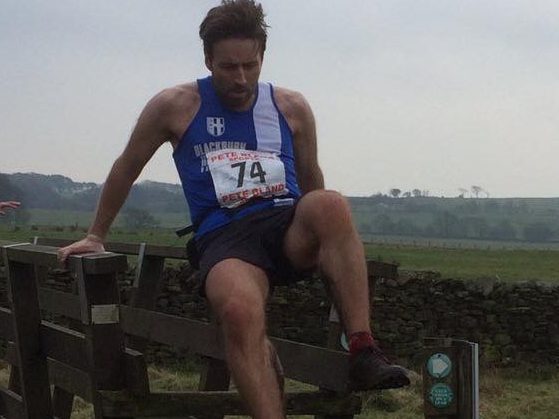 Chris Steele headed home this field numbering nine hundred and ninety three runners by over four minutes, winning in a time of 68.29.

Lorna Sharp and Claire Bridge ran for the Harriers with Lorna only deciding at the last minute to enter. Clair set a new PB by nearly three minutes when she placed 525th in a time of 1hr 57.10 whilst Lorna, who hasn’t been able to do the training for this distance, wasn’t far outside her PB finishing in 645th in 2hr.03.00, just one and half minutes away from her best. 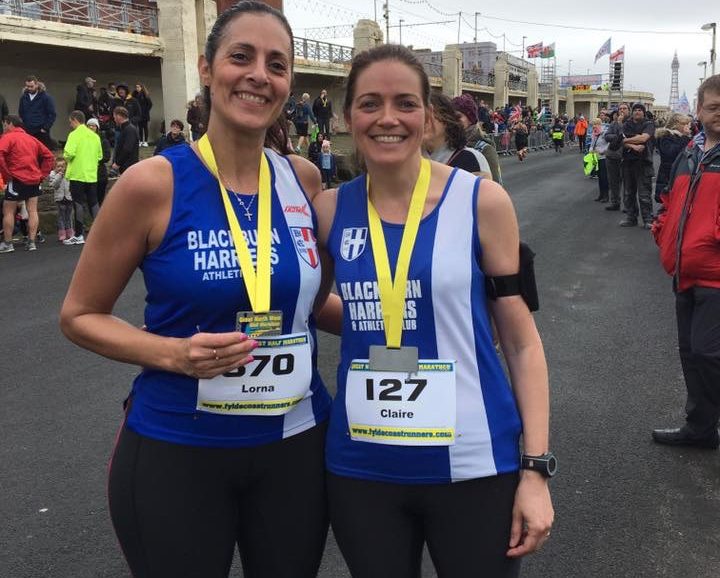