Some good performances from the Harriers at this years Medal Meeting held at Blackpool in not too bad weather conditions although the usual ‘Blackpool wind’ blew.

Great to have Olympian Sophie Hitchon down at the Track to present some of the Medals to winners on the day. It is a memory that will live on for quite some time in the minds of the young athletes who had their Medals given to them by Sophie. 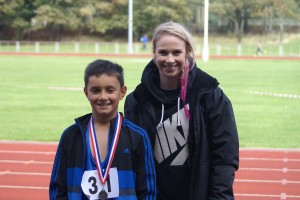 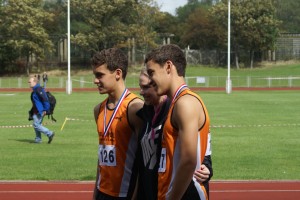 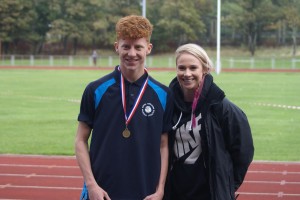 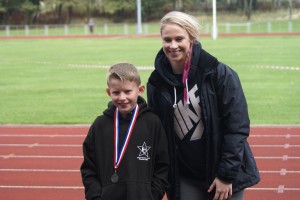 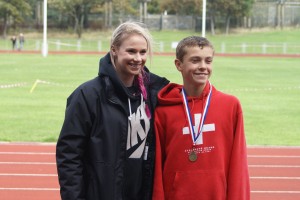 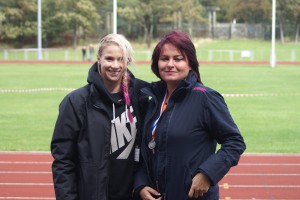 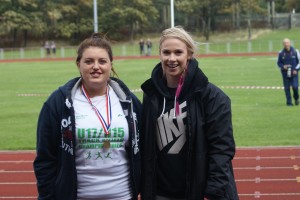 Sophie presenting some of the Athletes with their Medals Connor Davison had a great day picking up three wins in the Shot Putt (9.89m) – Hammer (26.49m) and Discus (24.84m). Three wins and three Gold Medals is not a bad return for the day. Oliver Pearson-Moore took a Silver Medal in the U17 Javelin with a throw of 31.32 which was just 50cm away from a new PB and Brother Sam Pearson-Moore took Silver in the U15 Javelin with 33.52m adding over two metres to his best so far and set a new PB. U15’s Cameron and Nicholas Massey, just returned from holiday contested the Long Jump, High Jump and Shot. In the Long Jump Cameron won the event with a jump of 5.20m and took the Gold Medal with Nicholas in 7th (4.58m). Hanzala Hanif also took on the Long Jump finishing 7th (4.66m). The brothers positions were reversed in the High Jump with Nicholas 5th (1.45m) and Cameron 6th (1.35m). In the Shot Putt Cameron earned his second medal of the day when he finished 3rd (9.87m) and Nicholas placed 6th (8.30m). Morgan Phillips – who had set a PB for the 800m at Trafford earlier in the week – raced in the Senior Men’s 800m and won it in a time of 2.03.40, knocking a further three tenths of a second off his PB which in the wind at Blackpool was probably worth a little more. U17 Olivia Brooks smashed her Long Jump PB when she added 14cm to her existing mark to win the event with a jump of 5.20m and take the Gold Medal. She then added Silver in the High Jump placing 2nd with 1.45m.

In the U13 Girls events there were really good performances. Emily Warren convincingly won her 800m in a new PB – cutting two seconds off her previous best – to record 2.32.60. She then went onto win another Gold Medal in the 200m winning that in 28.40 and again setting a new PB knocking two seconds off her previous best. And, just to finish off the day she went and had a go at the Shot Putt placing 8th (5.32m). Amy Davies ran the 1500m and smashed her previous best time in winning a Bronze Medal and chopping a full 14 seconds of her previous best, setting a  new time of 5.26.40. Charlotte Williams took a Gold in the Discus with a throw of 25.39m, a Silver in the Shot Putt (7.96m) and set a new PB in the Javelin with a 9th placed 16.94 and commented after this last event “I got a PB but I am not very good at Javelin”. Whatever she thinks about her Javelin capabilities, she is a talented young athlete in a number of other disciplines.