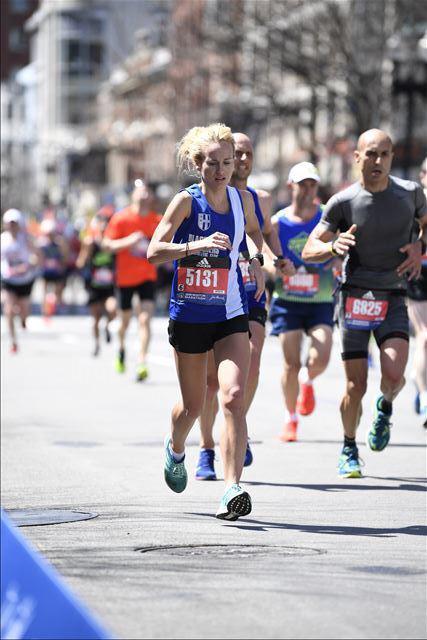 Rachel Wood continued her Marathon running career which now total five races in all, her first being  the London Marathon in 2015 where she clocked 3hr 03.07. On to 2016 to London again where she ran her personal best time of 2hr 59.02; in 2017 she ran 2hr 59.26 in Berlin followed by a 3hr 07.37 in London (2018). Rachel targeted the Boston Marathon this year – and not the easiest by a long chalk especially with Horrible Hill in it – accompanied by her dad – Tony Wood, President of Blackburn Harriers and Chairman of Northern Athletics. For Tony it was a special visit as he told the Club “it was a special visit for me – I went to the US in 1974, 45 years ago, as a camp counsellor with Camp America and I visited Boston then with a fellow runner. He took me to a running shop that was selling the new Nike brand shoes near the start of the Boston marathon and he bought a pair – the running boom hadn’t started yet. He told me then about the race so it was quite emotional to return all these years later to watch my daughter run the race”.

Rachel had another cracking run to finish 7th out of all of the British women racing in a time of 2hr 59.31 to continue her run of Marathons in very consistent times, everyone of which has yielded her a championship qualifying time for London. After the race she spoke to the Harriers saying “I ran the iconic Boston marathon last Monday and it was epic! The course was point to point and was undulating. The race day started with a 1 hour bus ride from Boston downtown to Hopkinton were the start was. It was an enjoyable experience loading onto school buses with other runners and spending the bus journey chatting about all things running. The weather was hit and miss… the race day started with a thunderstorm and by the time I reached the end of the race it was lovely and sunny. My dad travelled over to support me and was at the base of ‘heartbreak hill’ around the 20 mile point. Heart break hill isn’t as steep as Darwen tower but it was tough nonetheless! I was hoping to pb as training has been going well but I didn’t manage it on the day. I crossed the line in a time of 2.59.31… another sub 3 so I am happy with that “.

Jacob Watson missed a new personla best time by just one second – a cooler day w0uld have certainly helped as he clocked a time of 33.09 in 18th place and told the Club after the Race that it was “A run of 2 halves at this morning’s Salford 10k. The first lap flew by and until 6k I was confident of coming away with a PB. Unfortunately during the second lap I did start to fade somewhat, however the support from the crowd and shoutouts from John Chaplin, Marc and Jack helped me keep it together! Crossing the line I knew I’d given it 100% which at the end of the day is all you can ask from yourself. Reflecting on this I’m chuffed to have run so close to a PB and I’m confident I’ll break this pesky 33 minute barrier at some point during the year!” Josh Holgate was just one place and five seconds behind as he ran a time of 33.14 in19th spot. 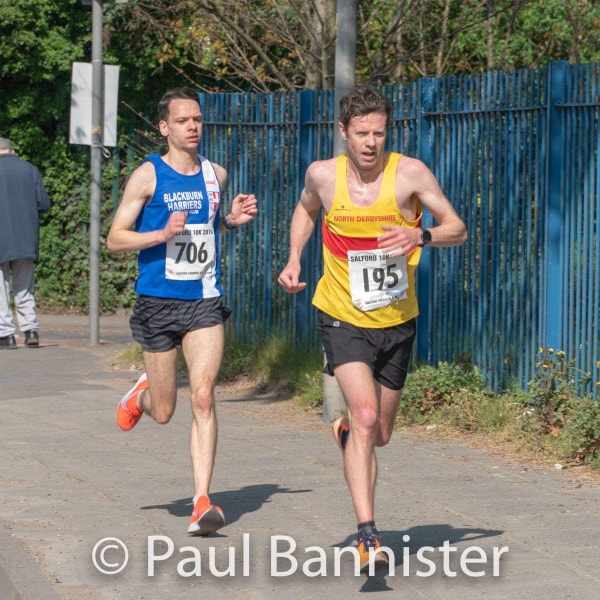 Next Harrier across the finish line in was Tom Blaney in 33rd place with a time of 34.15 commenting that “Salford is the first fast flat 10k Ive done since Trafford last year and have been looking forward to it ever since i missed out on Ribble Valley over the christmas break. The weather was great, sunny but not too hot and no wind. I ran the first 5k in around 16.55 which felt comfortable with the hope of pushing on in the second half. Unfortunately it wasnt my day i put every last effort into it but i could not go any faster. A bad day for me but i take positives out of consistent training and staying injury free. Onto the next one. Well done to the other Harriers who ran some great times today its a pleasure to train with such a great group of lads!“ 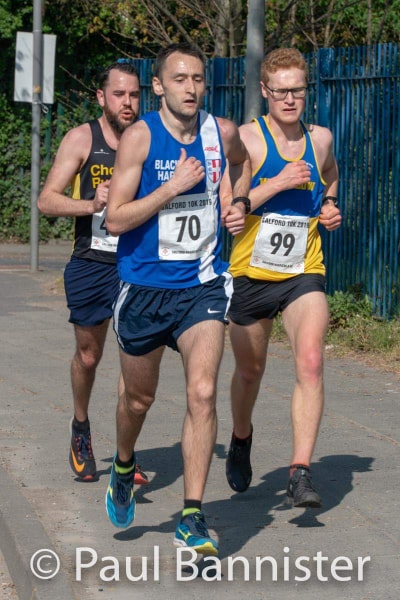 Calum Holmes made it four Blackburn Harriers home as he crossed the line in 55th position running a time of 35.17 and afterwards reflected on his race daying “I felt okay for the first 6k just tucking in behind Thomas Blaney who also had a great run. I finished in a rather good time which I’m quite happy with, the conditions were hard with the warm weather and unfortunately wasn’t a pb but I’m happy with my run today as I have been off at the moment I’m just going to continue to work really hard with the lads in training and reach my goals for the year, great team work today and great running from everyone as usual upwards and onwards”. 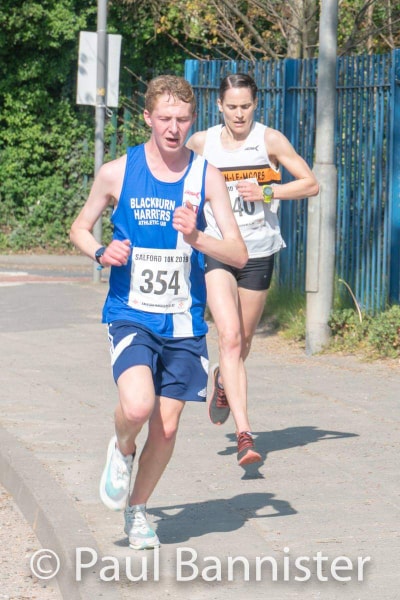 Paul Brindle and Janine Fallon joined two hundred and forty four other runners on a very warm Good Friday in the Caldervale 10m road race, which was won in a time of 55.33 (Joe Beech).

Paul came home in 4th position and 1st Vet in a time of 63.14 telling the Harriers afterwards that the “Caldervale 10 which I’ve done few times is real test of strength with times slower than normal. Especially when it’s hotter than Spain. You can’t grumble everyone’s in the same boat and it’s how you plan to race. The first two miles are all down hill, the next four go up. Running in the boiling hot Sun I’ve not really run in this year, it was a real test to keep my position. On the top of the last hill I had Mark Holgate breathing down my neck. With two mile to go I went long and kicked on …. 1.9 mile to go cursing myself for being so competitive and just settle 5th maybe 6th but less pain. Trying to block out the inner soft me , I managed to break free but had a very tough last half mile run in. I was slower than previously but in very testing conditions. Happy with 4th overall and age cat win and bottle wine. It really was a Good Friday …. Oh come on it had to be said!!” Janine clocked a time of 75.47 in 41st spot overall. 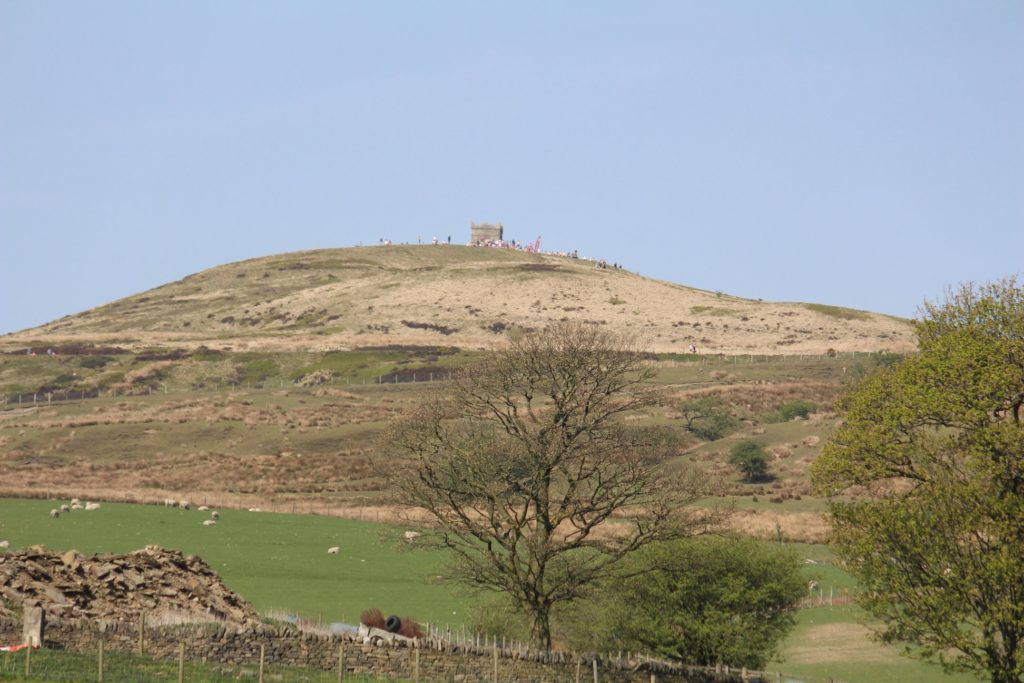 The ‘Rivington Pike’ Fell Race is one of the oldest fell races in todays fell racing calendar. The earliest races date back to the early 1880’s, where the challenge of the foot race to the summit of the ‘pike’ and back, taking in 700ft of ascent and covering over 5km in distance has attracted the very finest athletes ranging from Olympic track runners and Marathoners through to out-and-out fell specialists.

Tom Marchant and Carmen Byrne ran for the Harriers in the race won by Michael Cayton (17.20) – another race run in pretty warm conditions. Tom had a top ten finish, coming home in 7th place with a time of 19.52 and told the Club “Today was a tough, fast and warm race. I knew I had to go off quick at the start and have a fast climb to get to the top with the front group which I achieved. This then set me up for a fast decent where I could catch a few places in which I caught 4 or 5 on the downhill. Overall a very fast race, despite the hot conditions it didn’t affect me too much with having spent a week in Portugal training, so benefited me more for the race. Happy with how the race went and feel a huge improvement within my running”. Carmen finished 96th overall out of a field of 406 which was a pretty good effort after struggling for a couple of months due to achilees problems. After the Race Carmen commented on her return to racing saying “After 7 weeks of mainly cross training it was lovely to be back racing. I set off steady for the ascent and then caught a couple of women on the way down and finished strongly. Looking forward to the next race in a few weeks”. 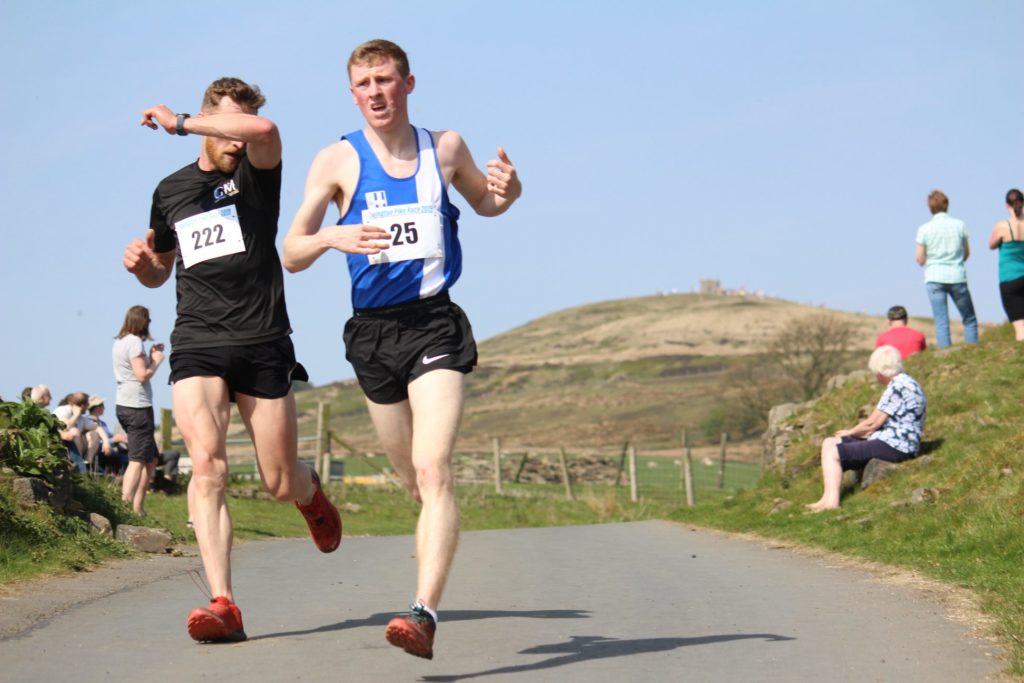 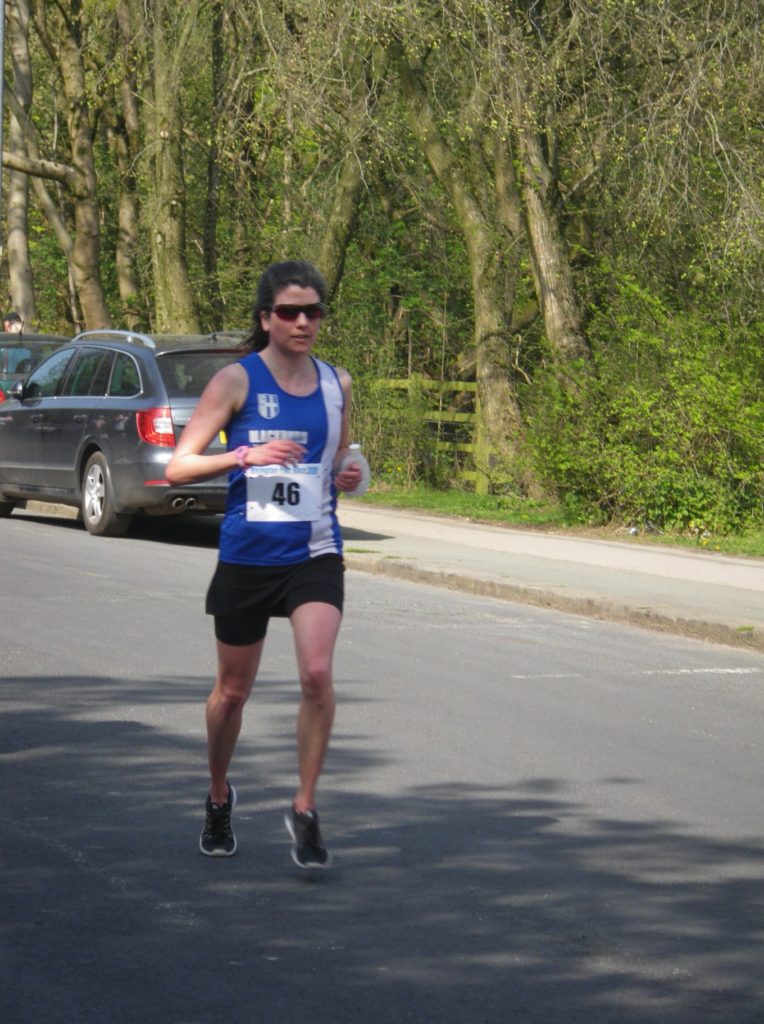 John Horrocks and Matt Nuttall represented the Harriers on another hot day which affects everyone in terms of hydration and ther ability to cope overall with the heat. John crossed the line in 41st position with a time of 2hr 06.04 and refelcted on his race to the Harriers after, commenting “Newlands memorial race taking in Robinson, Hindscarth, Dale Head, High Spy, Maiden Moor and Cat Bells. A quick run out into Newlands valley to begin and it felt very hot so I was looking forward to getting onto the tops for the breeze. The climb up Robinson made it a tough start but once that was out of the way it was mostly runnable on the tops with a good last decent off cat bells. The heat started to take affect after about 8/9 miles and it felt a long way back! Finished 41st in 2 hrs 6″. Matt finished in 79th spot running a time of 2hr 17.09. 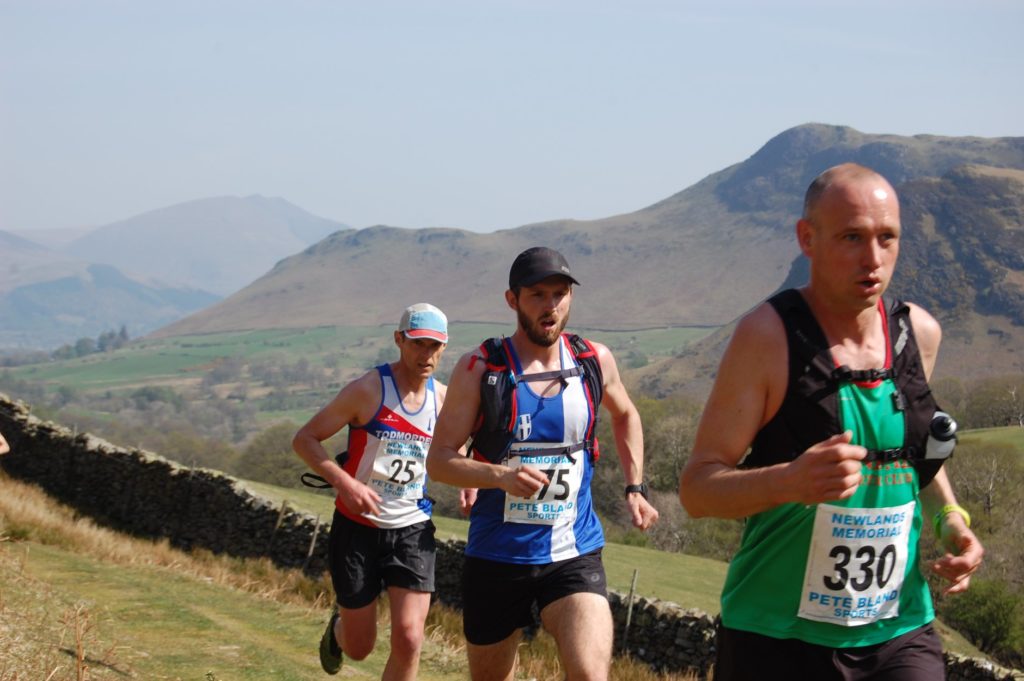 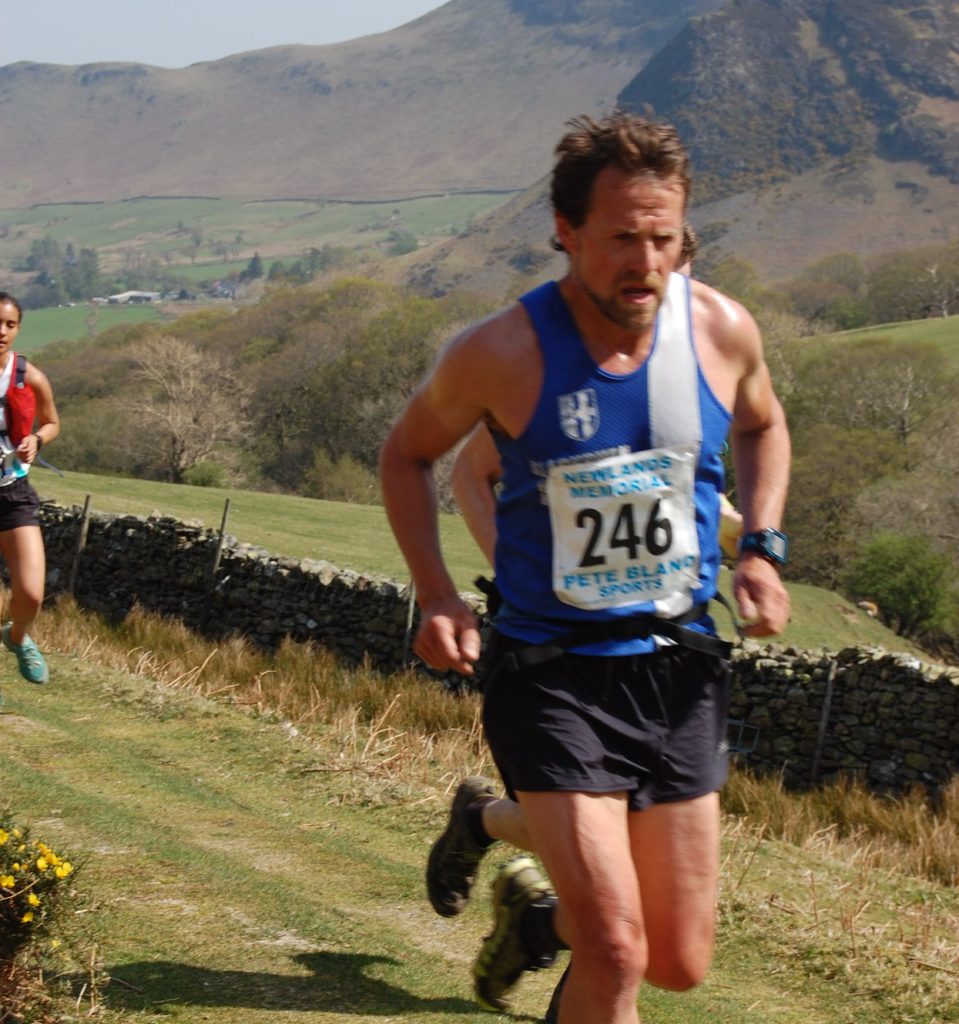