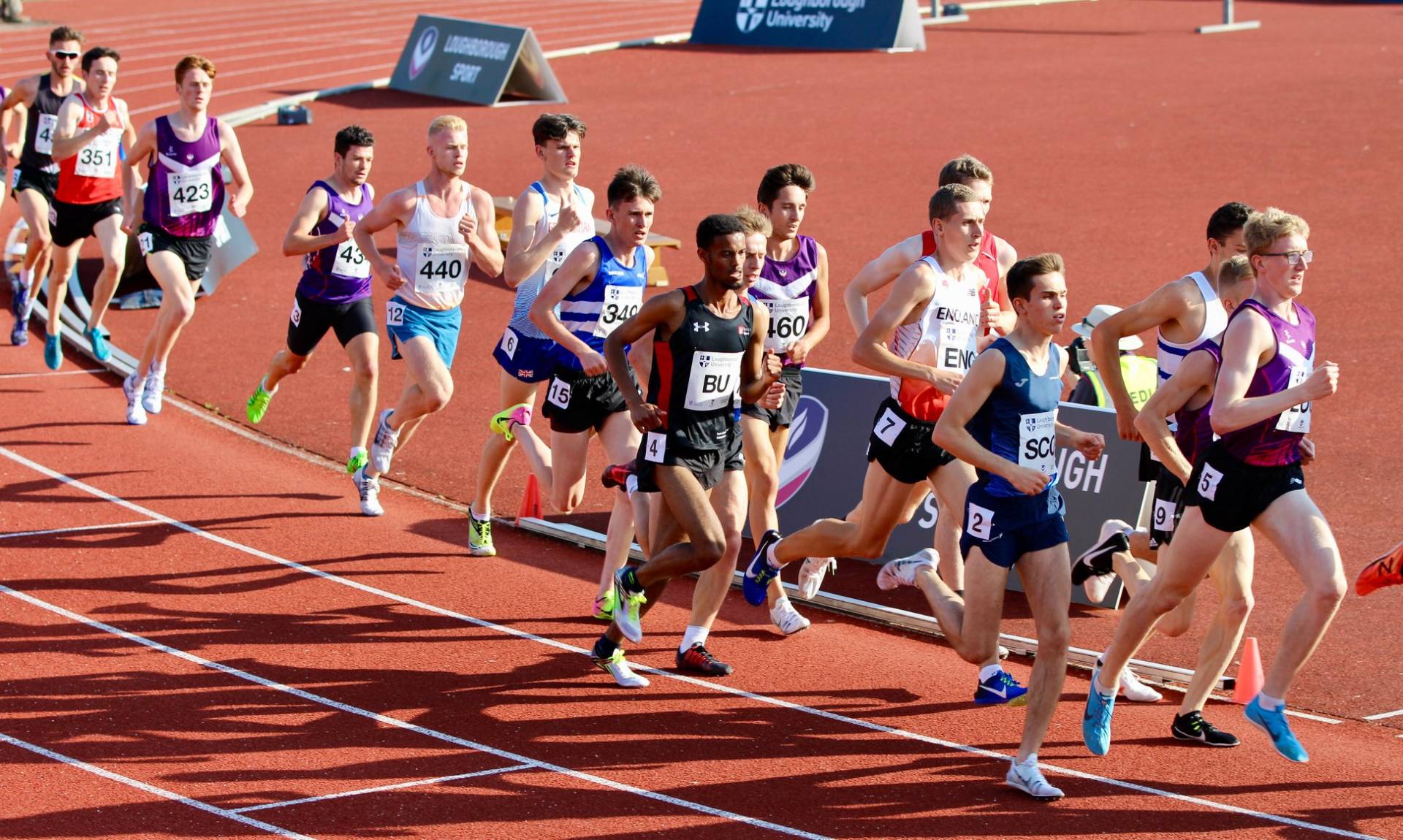 Rob Warner ran a massive new personal best at the Loughborough International at the weekend finishing 7th out of a field of nineteen, clocking 8.16.54 – nearly eight seconds quicker than his previous best for a massive new PB. The Club record is held by former Junior World Cross Country Champion – Mick Morton (8.00.10) – so over the next couple of years there is a possibility that could be challenged by Rob. Speaking to the Club after the Race, he commented that he “was pleased with the race, it started off a bit slower than I expected as we were due to go through in 64s and the pacemaker went through in 66 with me going through in 68 so it was a bit of different way to run it with the first KM being the slowest! I managed to hang in and stay in touch with the lead group until 600m to go when I lost concentration a bit and they got a gap on me, I managed to run my last lap similar to those in the front group so I was bit disappointed not stay with them as I felt I could have pushed a few of them all the way! Can’t complain with an 8 second PB and hopefully all points towards a good 1500m time coming up!” 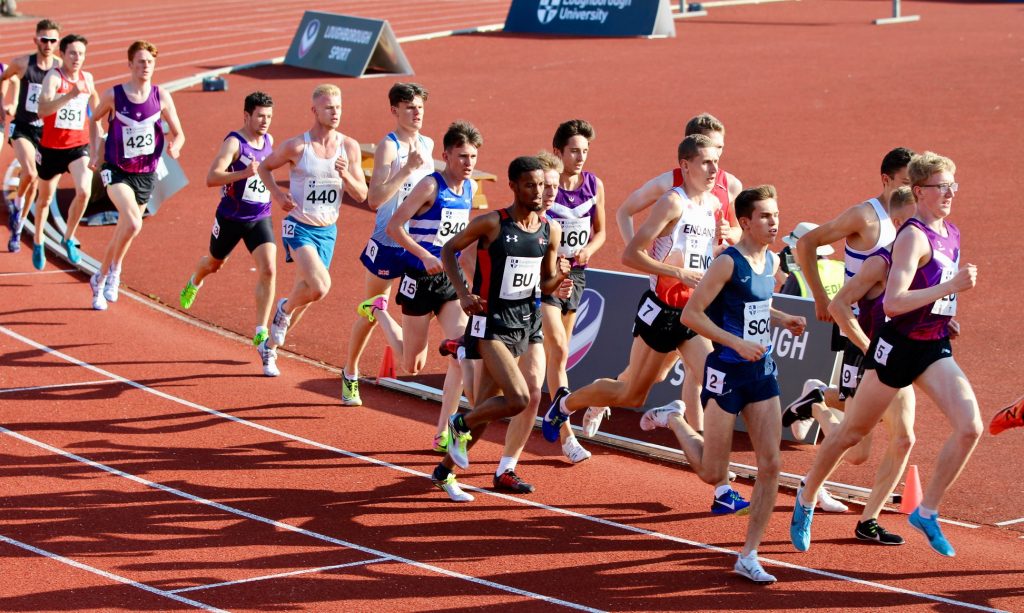 James Marchant was also in action in the Men’s Guest 800m race which saw him cross the line in 5th place in his Heat with a time of 1.55.46 – just three tenths off his personal best. This was a very good run by James, especially given that he has been plagued by injuries for the last two years. Speaking afterwards James told us “I went into sundays Loughborough International 800m race again with an open mind.. with it being my first real 800 for a while, I had no real idea of how i was going to perform! With training going well i thought i was in the shape to run around 1.53/54, although after going through 400m too slow, and working down the back straight to get back on the lead lads, the majority of my energy was spent, meaning the last 150 wasn’t quick enough for my desired time.. all in all I was pretty pleased to run 1.55 after little winter training and being the first 800 of the season.. hopefully a lot more to come” 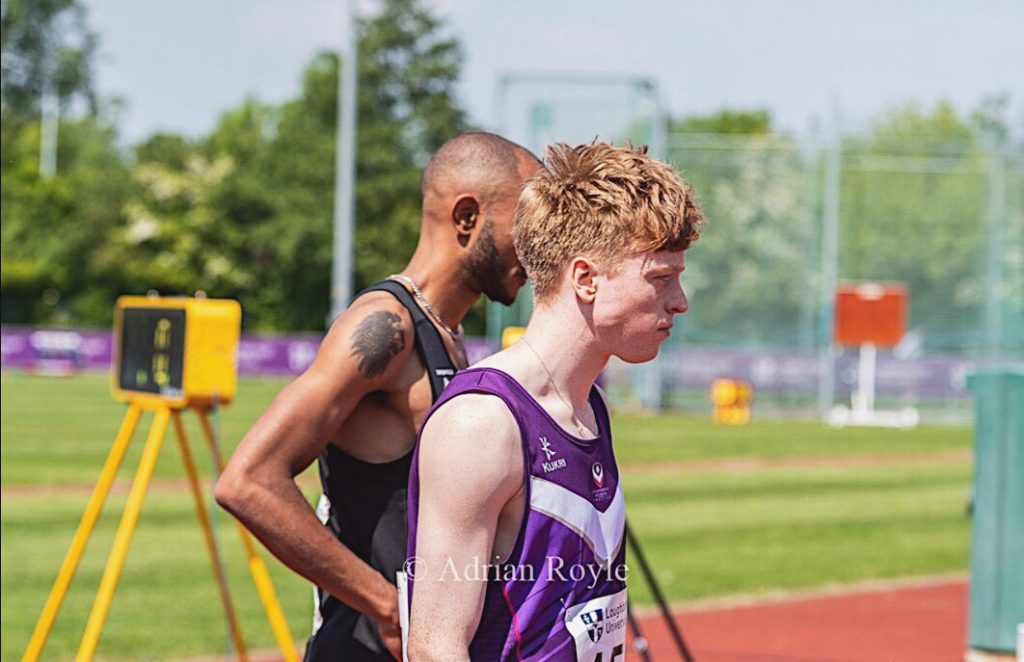 Holly Bradshaw was in Germany on a rainy day at the weekend where she won the Pole Vault competition clearing 4.60m at the first attempt, maintaining her consistency over her first four competitions of the year to-date with 4.60m in France, 4.60m at the Commonwealth Games and 4.64m in the Diamond League in Doha recently. 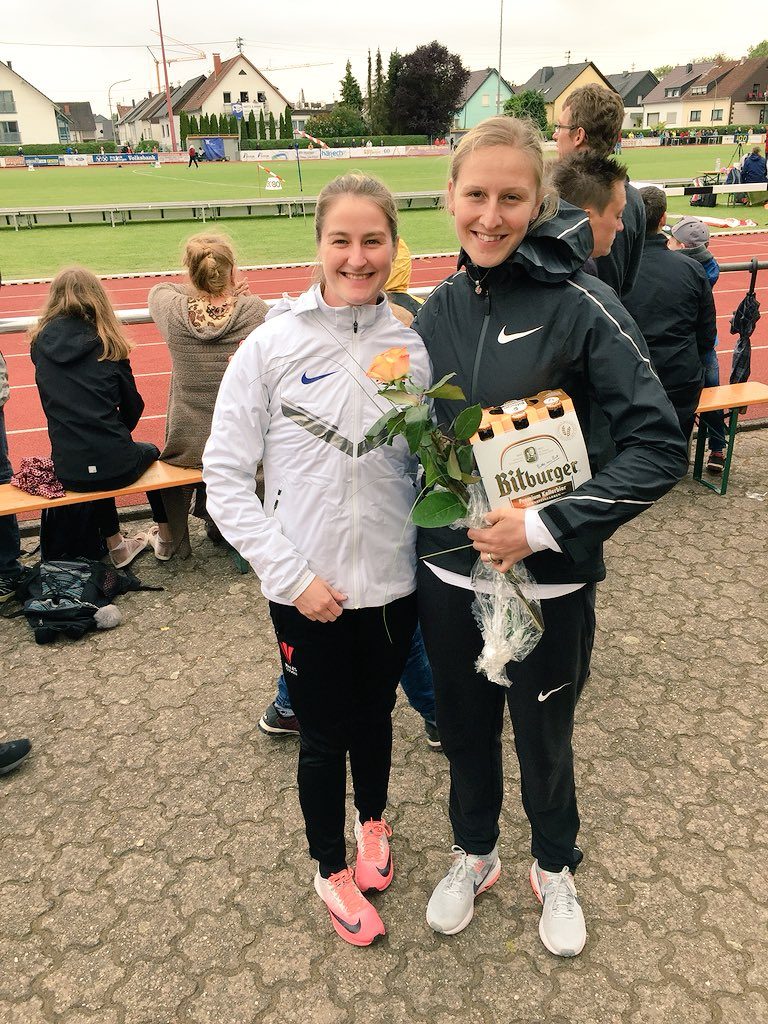 This was Jack Hindle’s third race of his season to-date which has seen him win one and place 2nd in the other. The previous races have been part of his preparation for this event and he performed perfectly to take the win in what he described as “the biggest win of his career so far”. Jack finished the Triathlon – featuring six hundred and sixty one finishers – on top of the Podium in a time of 2hrs 24.45, exactly two minutes in front of the second placed athlete, Pete Dyson. 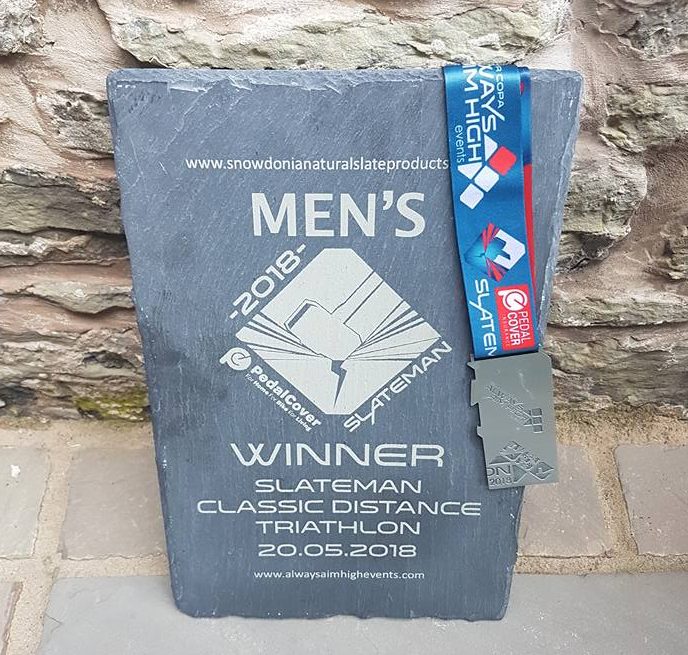 Jack was well pleased with the outcome and spoke to the Harriers after the race telling us he was “Delighted to take the win, by far the biggest win of my career so far. I really had to work for the title. I managed to have a strong swim, but still had to work hard to close the gaps on the bike. I managed to close to the front group, which stayed the same all the way to transition. Coming into transition there was the top 3 together, so I knew it was going to be won or lost on the run. Quite early in the run, 3 became 2 and the pressure was on. The lad that I was with, really put the pressure on with surges and accelerations, but I managed to hold him and then pull away. Which held all the way to the end. A great day and a great event, now to rest up and move forward”. 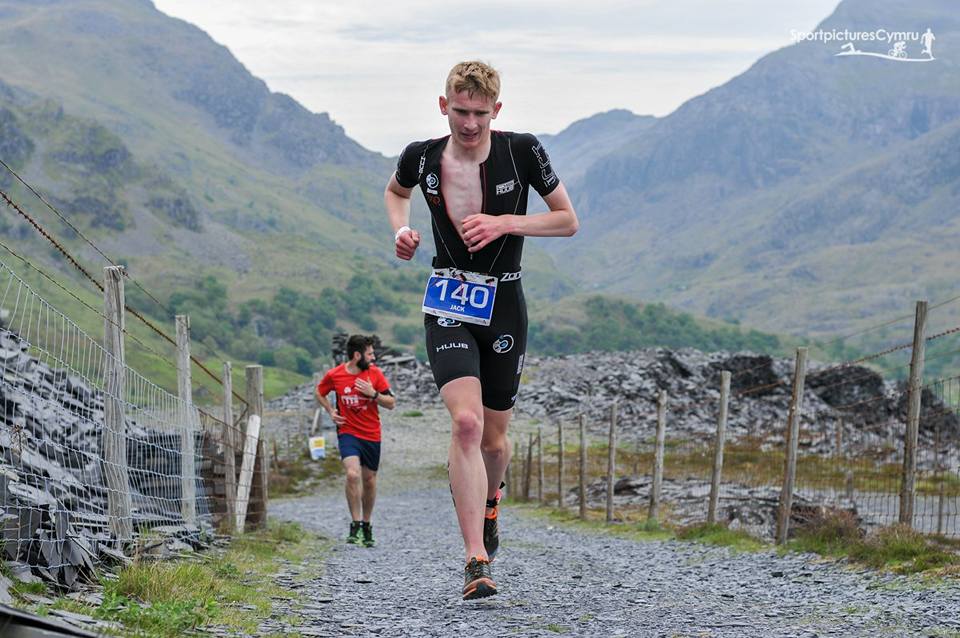 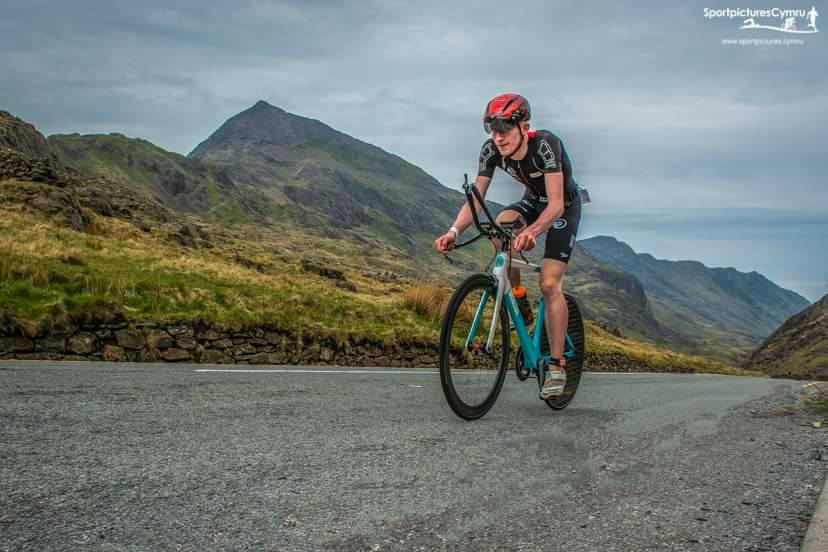 Jack Hindle is a young man who has already achieved a huge amount in Triathlon competition and because of his work rate, commitment and dedication to the training that is needed. Everyone starts somewhere and a number of young Blackburn Harriers are trying their hand in these type of events as can be seen from the results from the St Anne’s Triathlon held at the weekend.

Jonathan Grundy – father of one of these youngsters – spoke to the Club about these youngsters and their efforts which resulted in a fantastic 1st and 2nd place for them saying “Four young athletes represented Blackburn Harriers at the St Annes Triathlon on Sunday 20th May, 3 of whom competed in the sport for the first time with some great results. With age groups based on age at 31st December, race day ages in the categories can vary greatly. In the entry level Tristar category for 8 year olds, Harry Smith took part in a 50m swim followed by a 1500m bike then finishing with a 600m run, Harry just missed out on the podium by 15 seconds in his first race finishing 4th in a time of 12 minutes 31 seconds. In the Tristar1 category for 9/10 year olds, Harriers had 3 athletes competing.  In the female race giving triathlon ago for the first time was Harry’s older sister Emily Smith, she completed the T1 race of 150m swim, 4000m bike then 1200m run in a time of 23 minutes and 5 seconds finishing in 6th place out of a hotly contested 21 entrants in the T1 female race and only 1 minute and 27 seconds behind the winner, which is fantastic for someone competing in their first triathlon.

In the male T1(9/10yr) race it was anticipated that the battle for top spot was going to be between two Harriers, with 10 year old Matthew Smith taking part in his first triathlon taking on currently 8 year old William Grundy who started triathlon in the Tristart category last year. With similar swim times both Matthew and William started in the same lane in the pool with Matthew setting off 10 seconds ahead of William.  Matthew got out of the swim with the short run to transition opening up a 7 second time lead over William after the swim. As they got out onto the promenade on the cycle William put in a lot of effort to try and close the gap on Matthew during the 4km cycle, a slight mistake by Matthew on the route meant William managed to close the gap at about 800m, however after correcting himself and getting his head down, by the end of the bike and ready to start the run Matthew had a 16 second time lead and 26 second gap on the road to William. As they set out on the run course it was a straight battle to the finish and at this stage it was appearing relatively conclusive that if they put together a good run section they would be fighting for 1st place. William having the advantage of chasing gave his all and during the 1200m run managed to close the gap and get right onto Matthew’s shoulder as they appeared to run the final 150 metres to the finish line. The battle continued right until the line with Matthew crossing the line 1 second ahead of William, meaning on timing chip William took 1st place by 9 seconds in a time of 18 minutes and 10 seconds with Matthew securing 2nd place in a time of 18 minutes 19 seconds a total of 1 minute and 15 seconds ahead of 3rd place. A fantastic race by both and an especially good result for Matthew competing in his first triathlon in a popular age group of 20 male competitors. 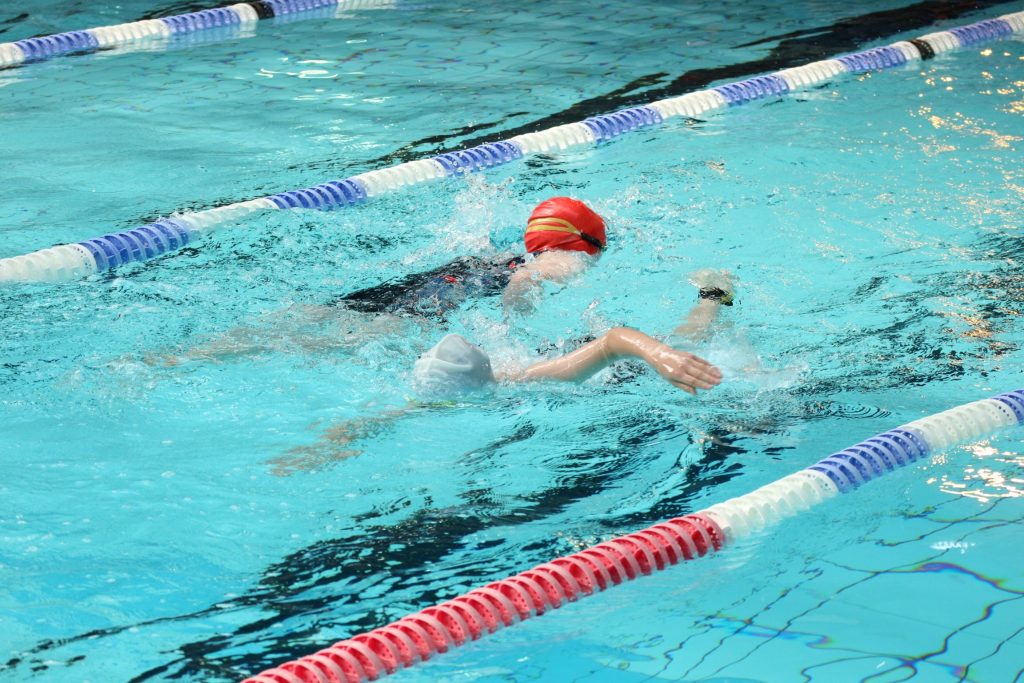 (Matthew in the red hat with William in the white hat) 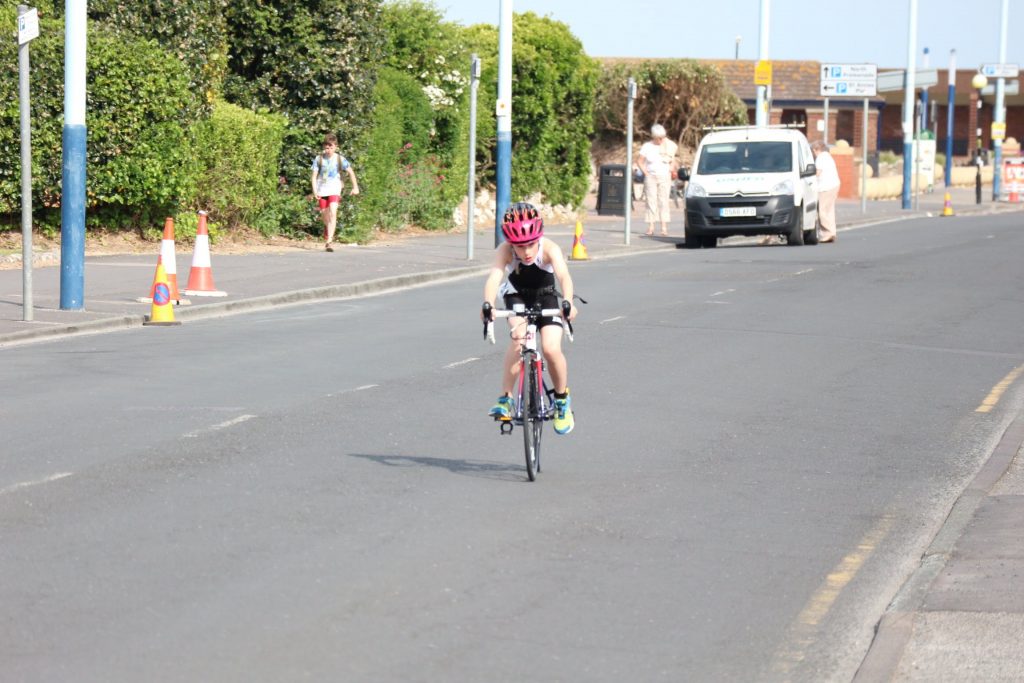 (William on the bike course) 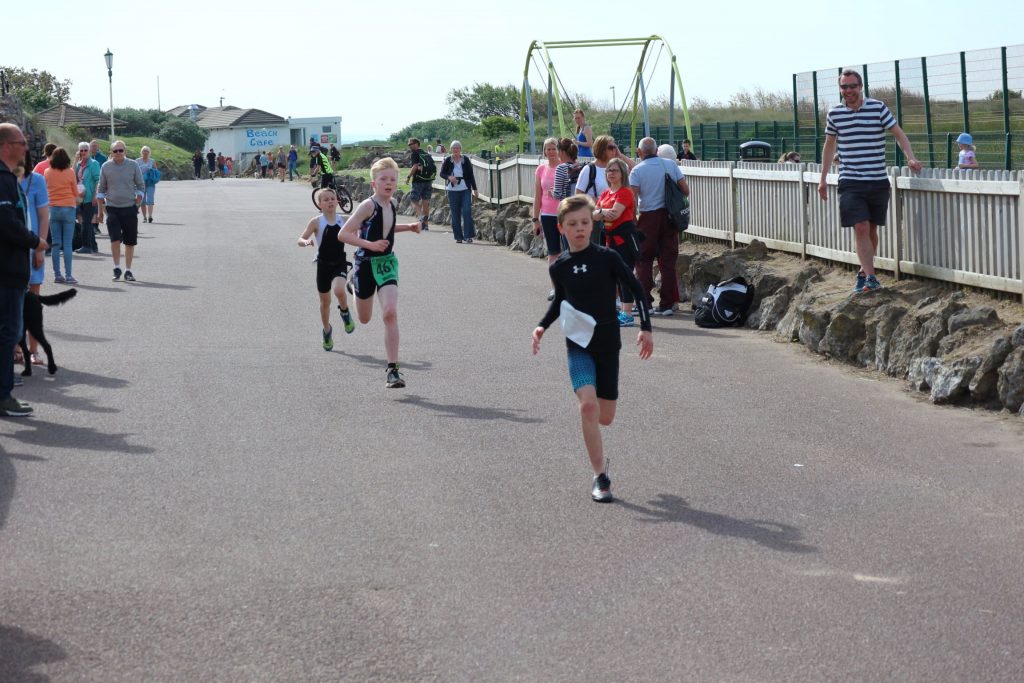 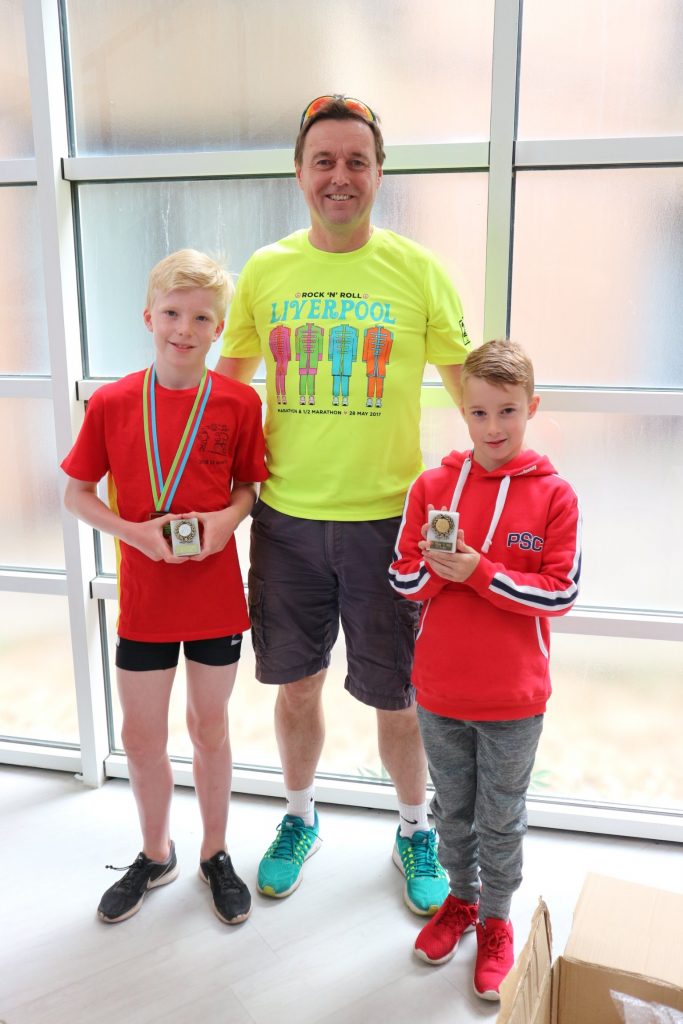 Run in very hot conditions, this mass race won by Mo Farah had two Blackburn Harriers participating – Victoria Mousley who was entered into the Elite Women’s Race and Daniel Hamilton who is a sprinter in reality but gave it a go nevertheless.

Victoria clocked 40.11 – coming home 27th in the Elite Women’s Race and 172nd overall with Daniel running a time of 53.22 (2973rd). Victoria spoke to the Harriers after the race about the day and said “I was feeling pretty good going into this race and felt that I could actually do my “elite” place justice and run close to 38. I had a good warm up and felt fine. Had a good first km and then just got a terrible stitch… Maybe from setting off fast… Or just bad luck. I don’t usually get them. I ended up walking for a few metres when it kept getting worse and at 3km I considered pulling out. At 5k it had subsided and I started to try and pick up the pace but just couldn’t seem to get my time about 6.35. Possibly the heat as of course the race started at 1245. I was gutted with my time as I ran 30 sec faster two years ago when I wasn’t in the elite field and I have not run over 40 for a ten k in 2years! One to forget I think. Still I was stood on the finish line when Mo finished which was great and got to have lunch with Gemma Steel. The other women were really friendly after the race and we had a good chat. I love running with the elites as all the logistics are looked after… Bag transportation, loos, nice lunch after and it’s amazing to line up with the likes of Dibabha and eat her dust as she zooms into the distance”.

Paul Bradshaw who has an 800m personal best of 1.47.37 decided to have a go at the Liverpool Rock ‘n’ Roll Marathon at the weekend and couldn’t have picked a worse day as temperatures soared to around the 25 degree mark meaning it was going to be a tough day. Paul finished in a time of 3hr 41.54 and in 405th place overall, which given his short preparation and conditions was a good effort. he spoke to the Harriers later about the experience commenting “on a hot day I did all I could to stay cool and hydrated but it just wasn’t possible and it was a tough day. Still the shoes are laced back up and I’m back running so here’s to continuing to get some fitness back” 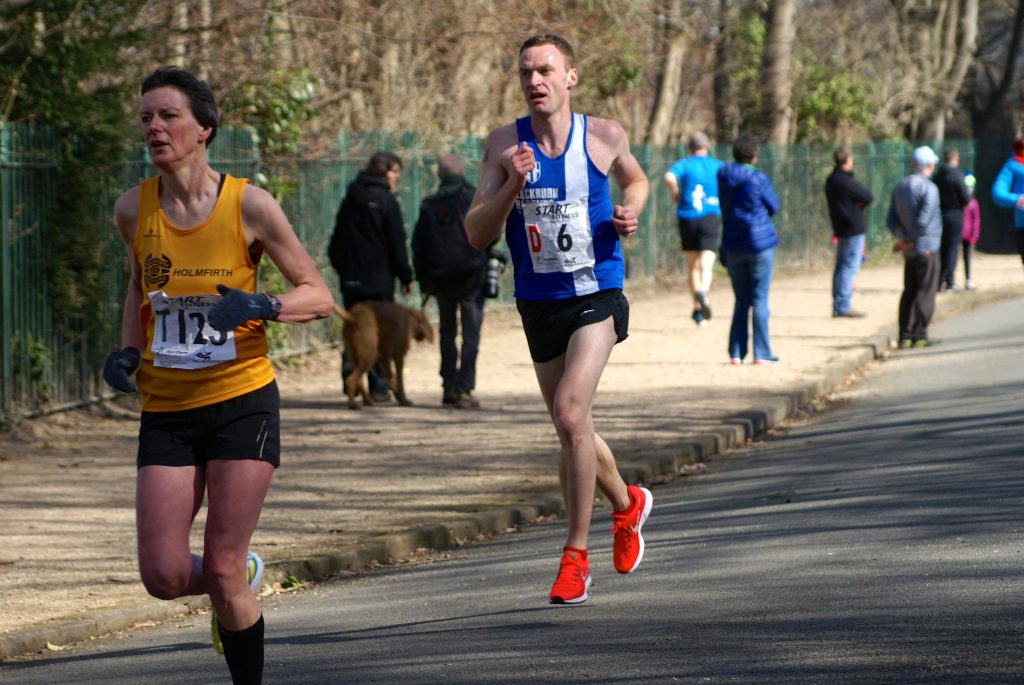 Paul Brindle and Paul Jeffries were out in this local 10k Race won by Steven Hayes in 35.06. Paul Brindle had a good run to finish 2nd and 1st V45 clocking a time of 37.12 – Paul Jeffries crossed the line in 25th spot in a time of 44.51 which was just outside his personal best. 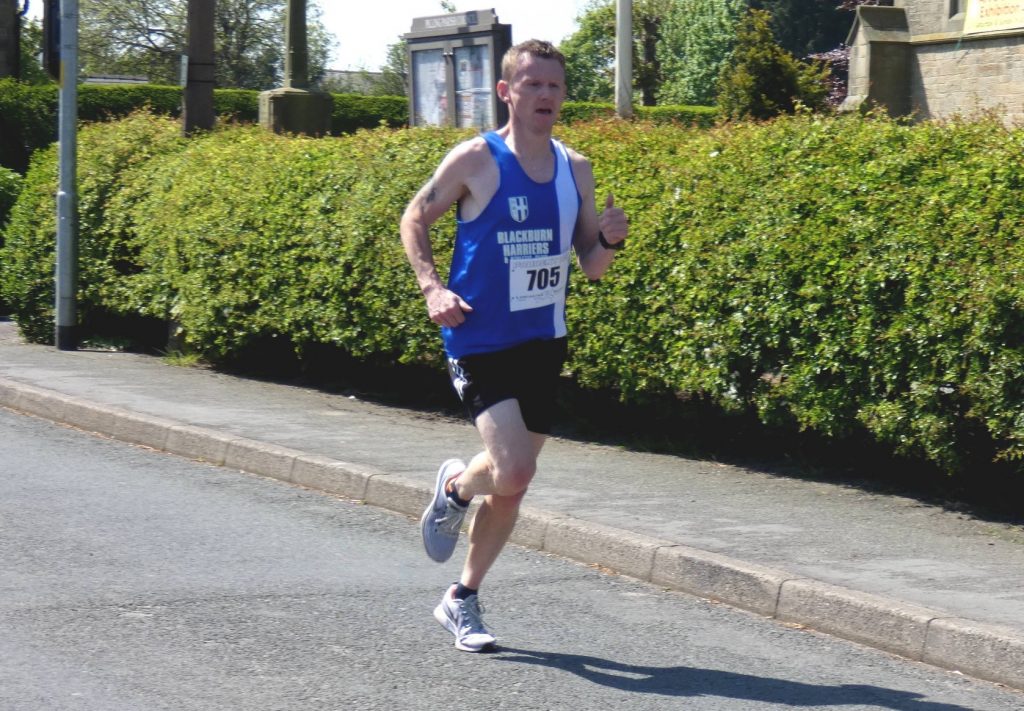