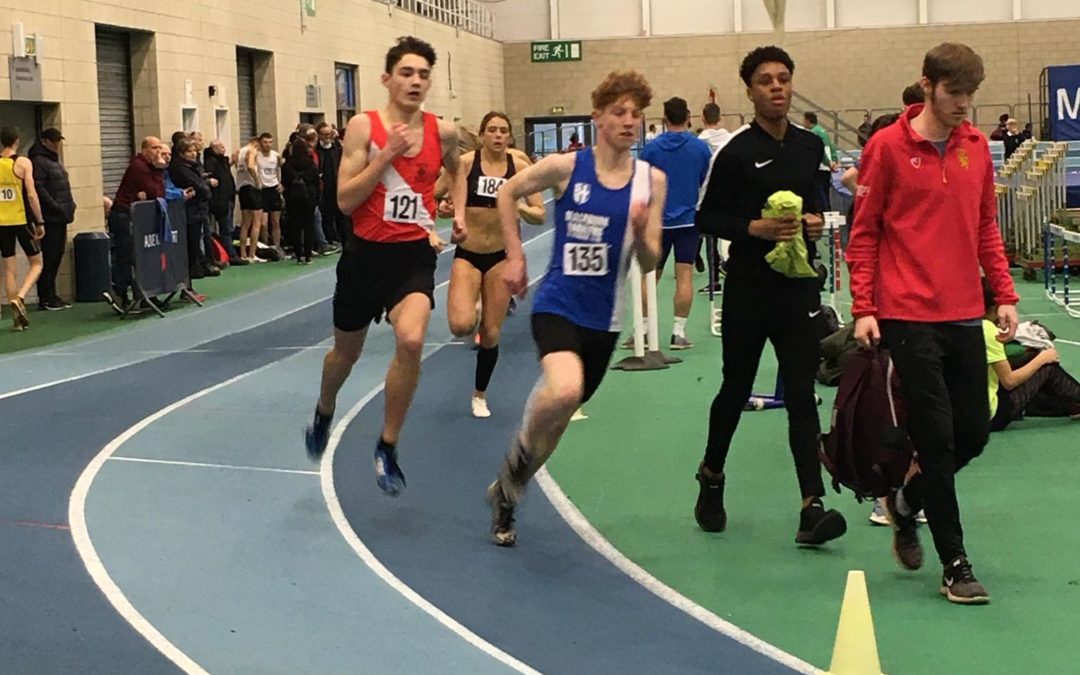 Sunday – January 26th – saw a number of Blackburn Harriers competing Indoors at Sportscity and Sheffield. At Sportscity Hayden Mercer ran his second 600m race of this years Indoor Series and took another personal best in a mixed age race where he was the youngest of the athletes. Bottom of age U17, Hayden, whose 800m personal best outdoors is 2.07 finished in 2nd place behind a sub 2 minute athlete with a new 600m PB time of 1.30.09 which represented an improvement from December 2019 of 2 seconds. Talking to the Harriers afterwards he told us that “It was a good race as I felt confident & strong. As all the others in the race were older, it really spurred me on”.

Over in Sheffield, U15 Dexta Thompson was trying his hand at the Indoors for the very first time and what a great start he had winning his 1500m race in a time of 4.52.39. 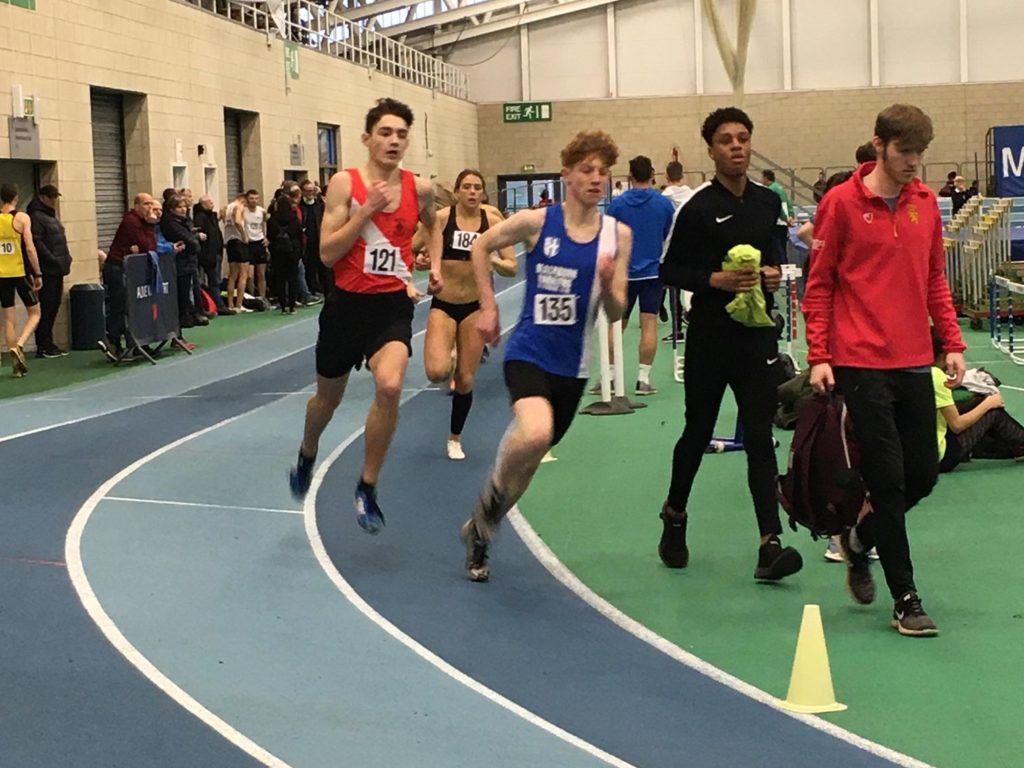 Back at Sportscity Brandon Zinyemba was making his Indoor debut for the Harriers in the 60m, clocking 7.34 in 5th place after a really bad start, so more to come at the next meeting. U20 Fawwaz Mustapha was also making his debut for the Club Indoors and like Brandon, over the 60m, and what a start for him as he won his Heat in a time of 7.51 which was an agonising 0.01 off qualification for the National Indoor Championships.

It was a cracking day for U15 Thomas Monks as he knocked off over half a second from his previous 200m best to clock a new PB of 26.27 and prior to that he clocked 8.04 in his Heat of the 60m in 5th place, which gives him the National Indoor Championships qualifying time. Afterwards Thomas’s parents told the Club “John and I would like to thank his coaches, we can’t believe how much he has grown over the last 9 months since joining the team.  He loves athletics… Can’t wait for the outdoor season”.

U13 Daniel Nuttall started off his Indoor season with a time of 8.70 over the 60m. At his second race he had reduced that to 8.49 and yesterday he set himself another new PB of 8.46 in 2nd place and then went and won his Heat clocking 29.15 over 200m, the first time he has run the distance Indoors, his previous run over the distance being outdoors (29.77) in August 2019.

Bottom of age U17 Rory Teare, another Blackburn Harrier making his debut Indoors and whose main events are High Jump and Pole Vault had a pretty good day too. In the High Jump, a mixed aged competition with U17’s through to seniors, Rory cleared 1.55 in equal 8th place and then went and equaled his outdoor personal best in the Pole Vault with his clearance of 2.30m in 6th spot. U13 Daniel Nuttall also had a go at the High Jump after his sprinting and cleared 1.20m, his personal best being 1.30m. 18 competitors took part in the Long Jump – from U15’s through to Seniors – one of whom was bottom of age Ben Branton who leapt out to 5.51m for a seasons best in 9th place and 3rd U20. 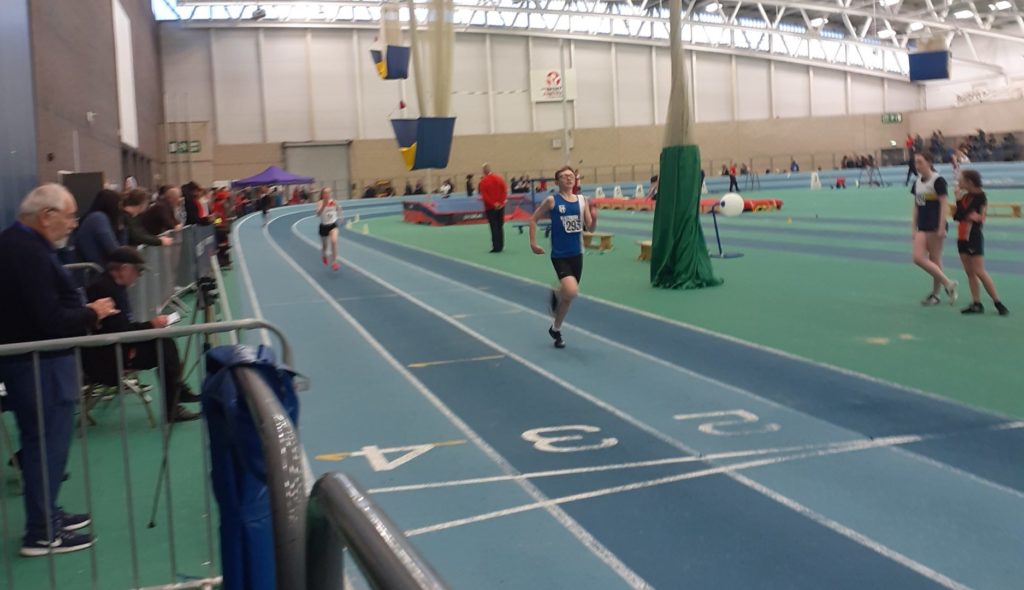 Paul Brindle, Joanne Nelson and John Cookson ran in this very windy 10 miler on the Blackpool coast which had over 350 finishers. Paul Brindle bagged a top ten spot as he came home in 60.49 and 2nd V45 in 8th place, whilst Joanne Nelson picked up 1st Prize for the V45 Women with her time of 69.31 in 50th place overall and 3rd woman. After Joanne’s cool down she spoke to the Club about the day saying “St Anne’s 10 miles was a bit blustery to say the least. Managed to complete the road / cross country route in 69 mins. Not my best, but it will have to do with my forever swollen ankle and dodgy hamstring preventing me speeding up. Good running by fellow Harriers, Paul and John”. In a day of V45’s John Cookson clocked 72.51 in his first race over the distance since 2015 and only the second time ever – five years later and just five seconds slower!!