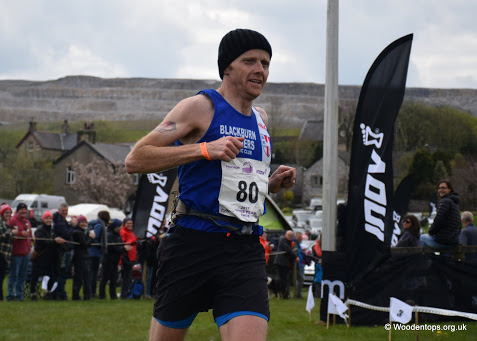 Good weather saw six hundred and ninety runners complete the iconic Three Peaks Race this year over the twenty three mile route including Penyghent, Whernside and Ingleborough  and with a profile not for the faint hearted:

Four Blackburn Harriers took part this year with the first athlete home being Shaun Livesey in 76th earning himself a 1st Class classification time of 3hr 39.16 describing his Race afterwards to the Club “Well went into the race felling good and with the weather being kind the course proved to be fast. I set out with certain time to hit each check point. Penny Ghent the first climb seemed to pass without any undue effort I topped out in under 34mins. Next stop high berkwith, I reached it in 1hr 1min, still feeling easy. Onto ribblehead and I dibbed in at 1hr 25mins still going well. Now onto my nemisis whernside. My goal was to summit in 2hrs race time, I did exactly that, with my legs still in good shape. The descent of Whernside to the hill inn check point isn’t my best part of the race for me, it is just too technical under foot but I was humbled to receive encouragement from John Calvert a multiple winner of the event for the club. I dibbed in 2hr 22min race time. Just after the pub I saw my wife and daughter with some refreshments I said my legs had gone! One last climb to go and I was suffering and was losing places, I still however managed to dibb in at the summit of Ingleborough at 3hrs exactly. Somehow I managed to get into some kind of running coming of the top without losing too many more places. Even after 23.4 miles of running I still managed to raise a sprint finish against race baggot from Clayton harriers the crowd loved it. Finish time 3:39:16. Although not my best effort the race itself is fantastic and is a must for anyone thinking about it”. 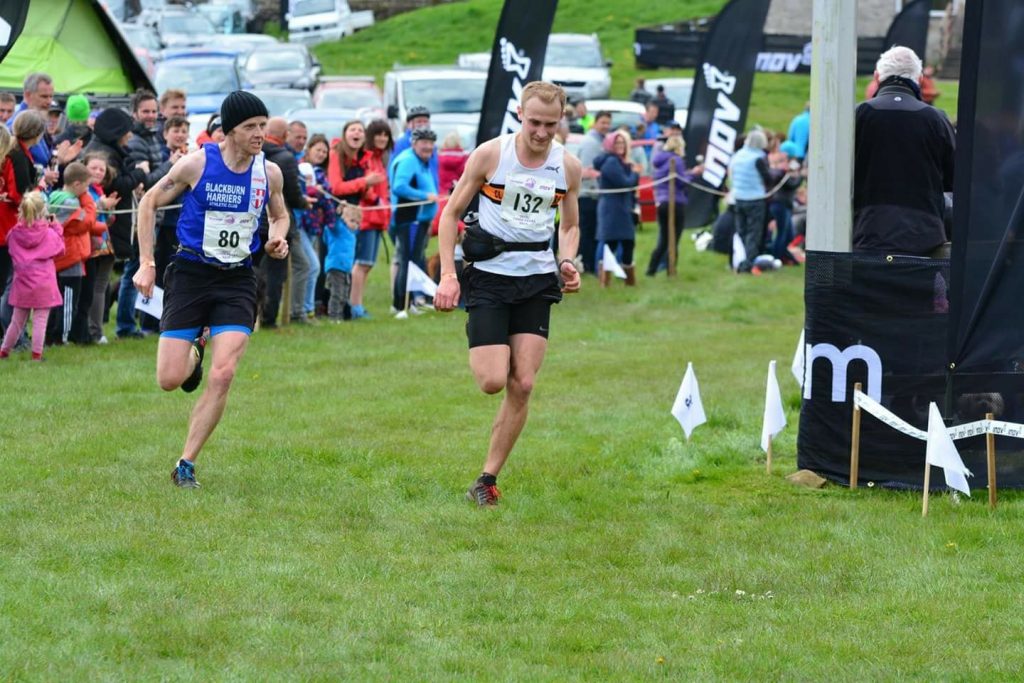 Next home came Andy Heys in 329th position and posting a time of 4hr 20.56. Andy enjoyed the day and told the Club “For me, the highlight of the fell racing calendar. Such a challenge, but such a privilege to be part of such a well organised, well supported event set in beautiful surroundings. My 3rd attempt at this race and managed to take another 10 minutes off my previous best on the course, coming in at 4:20. Was on target for a sub-4 and felt really comfortable at the Ribblehead viaduct, and then came my nemesis – Whernside! With all the training runs I’d done on there, I thought we had made friends? Clearly not the case as I summited Whernside absolutely destroyed. Still, managed to hang on and make it over Ingleborough to the finish. I’ve now got a hunger for sub-4, so will be back in 12 months’ time”. 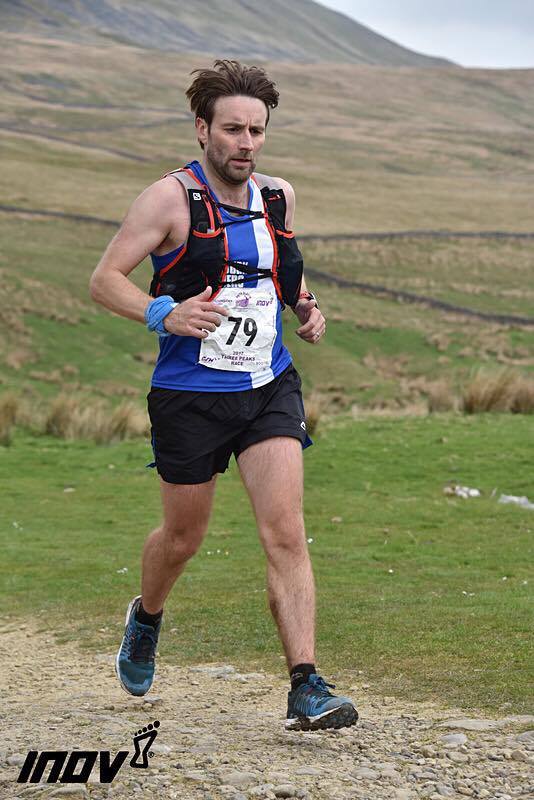 Not far behind Andy – just six places  and a couple of minutes – came Craig Greenough 335th in a time of 4hr 22.13. and behind Craig was Ian Clarkson in 625th position with a time of 5hr 07.40. After he had time to rest, Ian told the Club “My legs and body are officially battered!! What a day, having had a rough week with a cold, the Y3P’s fell race looked very daunting and intimidating, made the more daunting with the many top class fell runners in the country on the start line!! My plan of attack was one cut off point at a time and take it from there, all cut off’s achieved within time and then sit back and enjoy the ride over Ingleborough. Perfect weather conditions lead to a fantastic race day along with the competitors camaraderie, the marshalls and the people behind the scenes who make this event happen. Grand Day Out”. 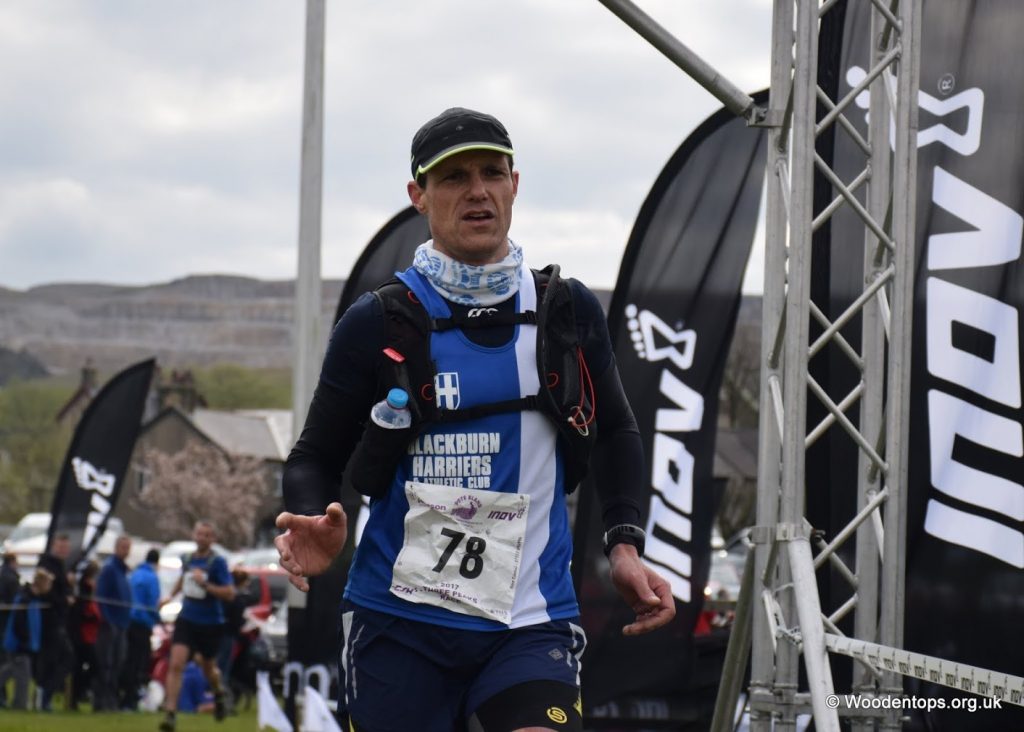 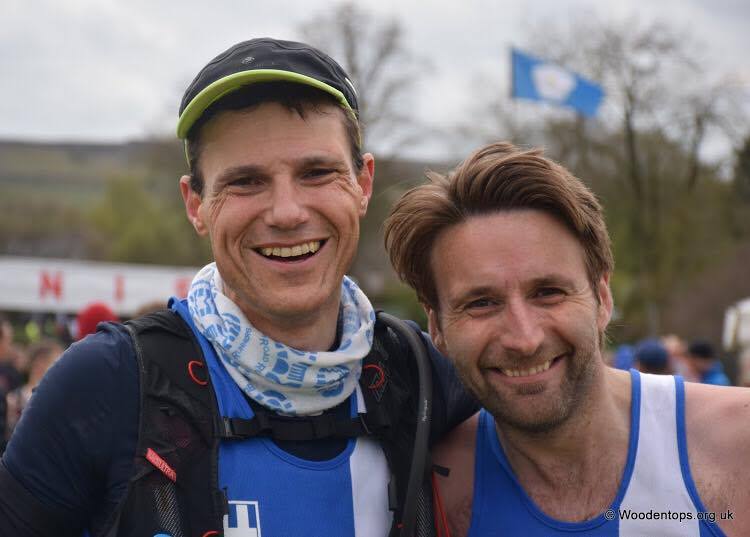 Joe Monk, Joe Howe, Joe Pearse, Roxanne Oliver and Katie Buckingham were all competing in the Championships at Bedford last weekend – 29th April – 1st May – with two of them coming up with new PB’s.

In a very competitive 5000m event of two Heats with one being won in 14.16 – nineteen of the twenty athletes all running under 15 minutes – and – the other won in a time of 14.46 with the first seven of the athletes all under 15 minutes, no one was ‘hanging about’. Twenty seven of the forty one athletes recorded 5000m PB’s. Joe Monk was one of the 27 finishing up running a new PB by six seconds (16.00.32) and said afterwards “Very disappointed with the run, felt heavy legged from the start, think Trafford took it out of me. I know I’m in 15:15 shape from the 3k on Tuesday, so to run what I did at BUCS is very frustrating, it just gives me the incentive to perform well at the Northern League“ 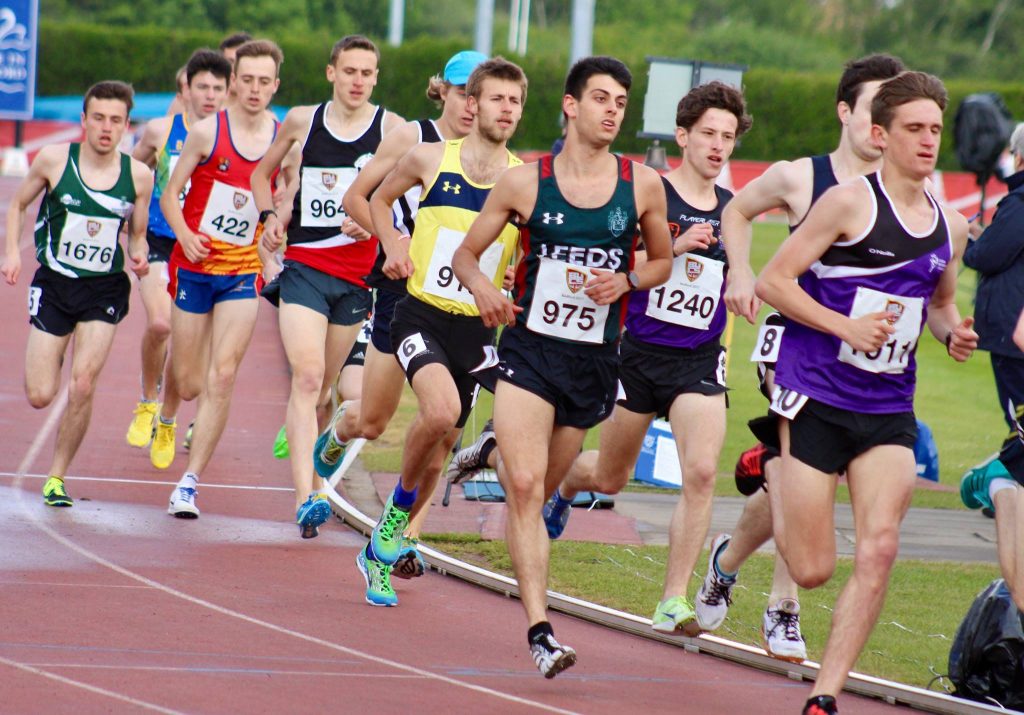 Joe Howe….was another athlete who got among the personal bests running 10.18.08 for a new PB in the 3000m Steeplechase. Joe told the Club “It was my first race of the season so a good start and a bit of a confidence booster. Disappointed to miss out on the final, I think it was my hurdling technique that let me down a bit. There’s definitely more to come”.

And then there was Katie Buckingham who came 12th in the Final of the 2000m Steeplechase with a time of 7.46.17 in her first ever attempt at the event which was a great effort and she commented after her event that it was a “great weekend watching both Nottingham and Blackburn team mates compete and be involved in such a big event against very strong fields. This was my first 2kmSc so I set off steady and built into the race hanging on to the girls ahead finishing in 7.47 which was quicker than I expected! By default a PB and 12th in a Bucs final, so can’t complain at all! First track fixture of the year and first 4x400m race has got me very excited for the rest of the season!“

Joe Pearse qualified for the Final with a 1.94m clearance and went onto finish in 7th position in the Final itself, clearing 2.00m after having to pull out of the event with an ankle injury. Joe told the Harriers that he was “Absolutely gutted that I had to pull out of the comp but happy with another 2m“. Roxanne Oliver posted a season’s best time of 15.46 in the 100m Hurdles to go through to the Semi Final where she improved her time to run 15.07 just four hundreth’s outsider her personal best time. After the Semi-Final Roxie told the Club “Another great BUCS experience. I was hoping for sub 15 seconds but I’m hoping I’ll get that next competition”.

For the three hundred and eighty seven finishers in this event, it included a 500m Swim, a 40k bike ride and an 8.6k run. In the end it was a one two for Brian Fogarty and Jack Hindle at the Horwich Triathlon at the weekend as Brian won the event and Jack came 2nd.

Brian Fogarty who is in training for the Lanzarote Ironman emphatically demonstrated how good his form is at the moment when he not only won the event but broke the Course Record too with a time of 1hr 42.41. A great performance which sets Brian up nicely for Lanzarote. 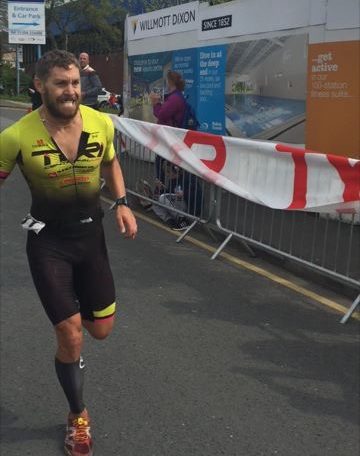 Jack Hindle is in pretty good form as could be seen by his 2nd place finish behind Brian in a time of 1hr 48.39 and told the Club “Overall I am really happy with how the race went today. After Clitheroe, I wanted to show what I am really capable of at the minute. I had a solid swim and run, I wouldn’t say the best run but solid enough. But more than anything I am happy to see that my cycling has improved. I’ve been working hard on the bike, and to finally see that my weakest discipline of the three is moving in the right direction is a big confidence boost. Massive congrats to Brian on another outstanding performance”.

U13 Nicky Saunders took a double win on the day with a new PB throw of 24.03m in the Discus before winning the Javelin with a distance of 23.05m and rounding off the day with a 3rd place in the Shot Putt (7.11m).

A Davies Day Out at the Races with Guest Eleesha Charnley 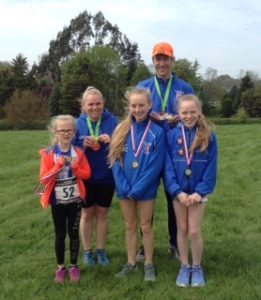 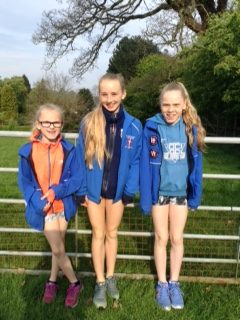 Chris Davies who set a new Marathon PB in London of 2hr 41.21 was in action again just a week after after and recorded a win in a time of 35.51. He told the Club that he “Decided to do the Sheriff 10K this morning. Felt good so I thought why not. Come 1st in 35:51. Won 50 quid for the Fayre Inns, so a nice meal out with the family will be coming shortly as well. Amy won the fun run and Hannah was fourth girl back, so a good day for them. Lindsay also hit a new PB as well. Well done family Davies”. In 2013 Chris had won this same Race in a time of 38.05 and with a current PB of 33.32 it shows how far he has come. 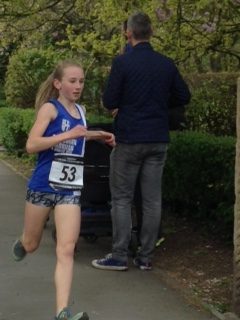 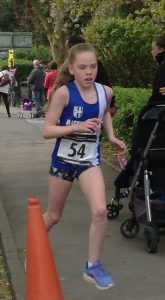 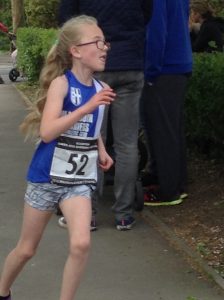 Over on the Fells it was the Thompson families turn at the Coiners Junior Races which saw Felix Thompson finish 6th overall out of a field of 55 runners in the U9 mixed Race of Boys and Girls in a time of 5.05 (RESULTS) – in the U11 Age Group it was Kady Thompson coming home in 82nd spot out of another mixed field of 95 runners with a time of 13.44 – (RESULTS) – the final run of the day for the Thompson family came from Dexta in the 101 strong U13 Field, again mixed, which saw him come home in 5th position in a time of 11.53 – (RESULTS). 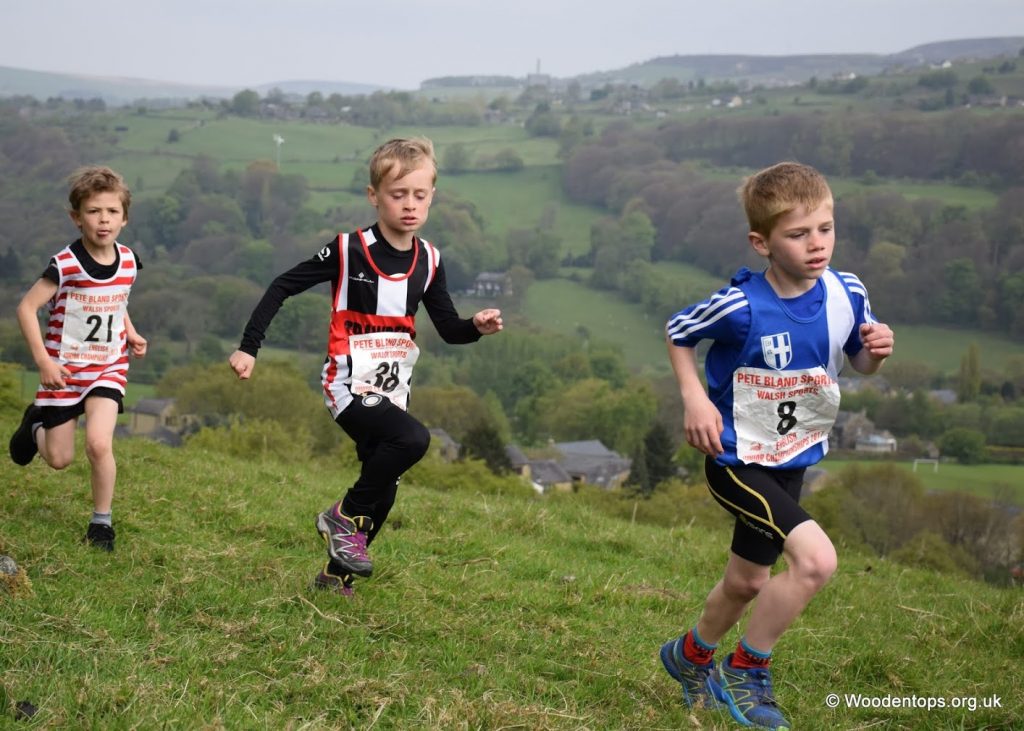 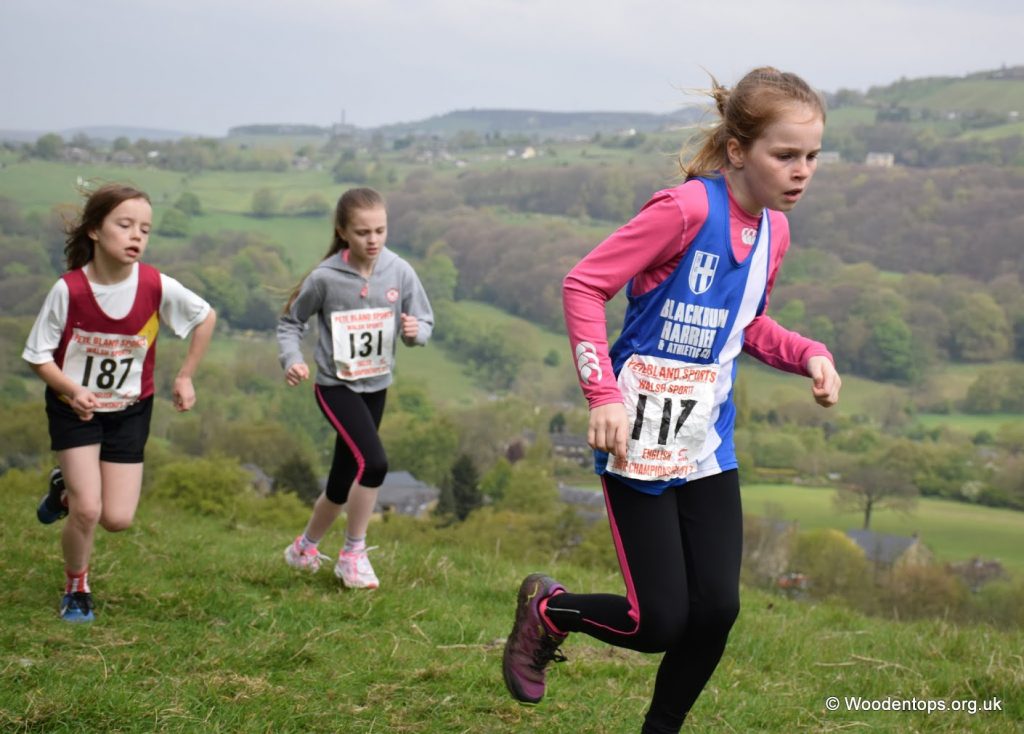 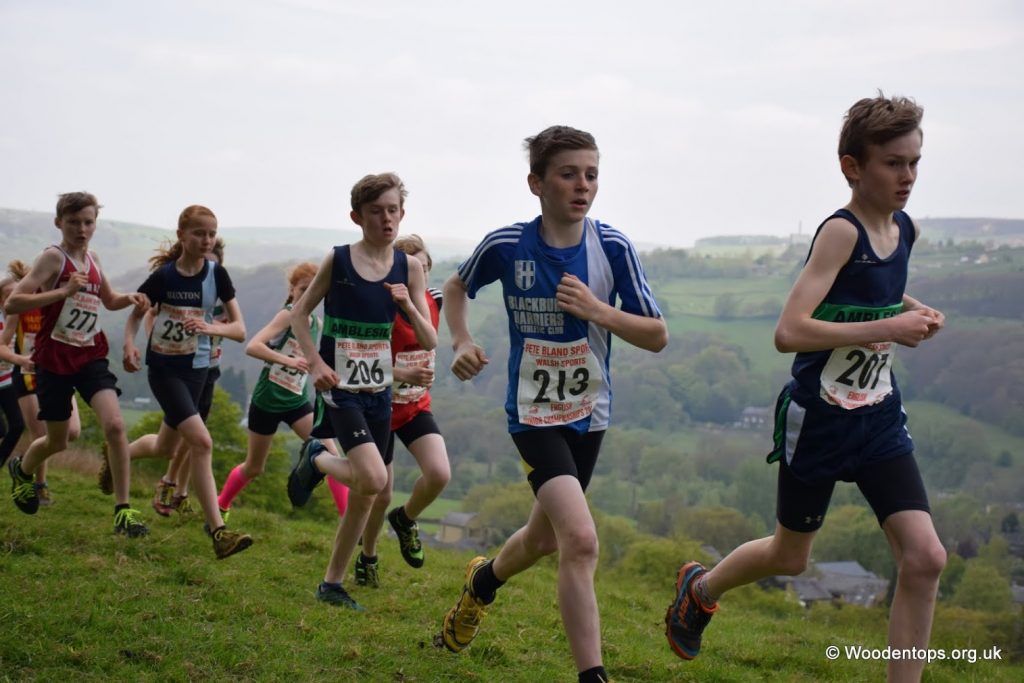