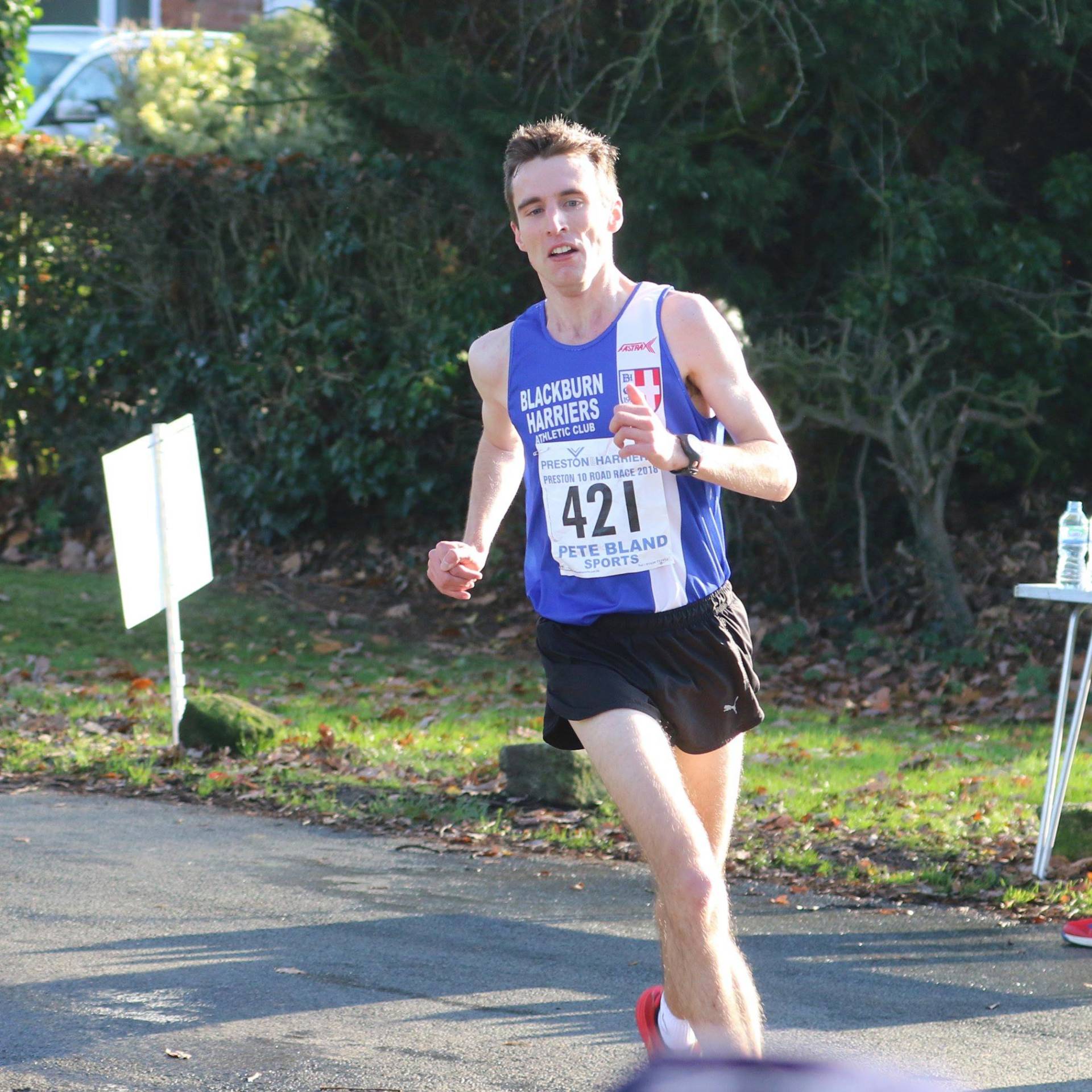 It turned out to be a very good weekend for the Harriers. After winning the Senior Men and Senior Women’s Red Rose cross country race at Marl Pits, the Senior Men were out at the Preston 10, a local race with a long history and featuring a field in excess of 500 runners.

Tim Raynes who has been in excellent form, winning the Red Rose cross country races at Leigh and Bolton, was making his debut over this distance and was up against some very good runners at the front end of the race. That excellent form came to fruition again which saw him win the Race in a time of 52.10 – 26 seconds in front of 2nd placed Rob Danson (52.37) and Adam Sciacca (52.43) and Chris Livesey (52.44) fighting it out for 3rd spot. Three places in the top ten by the Harriers meant that the Club won the Team prize too.

After the race, Tim spoke to the Club and told us “I came into the race not really knowing what to expect, having not run a 10 mile race before. Knowing that there was a decent field at the front, I decided to stick in with the lead group and see how the race progressed. After the first lap of 5 miles, it was down to a group of 4. At this point, Adam Sciacca upped the pace in an effort to get away. I tucked in behind him, however it was enough to drop Rob and Chris. Getting to about 7 miles though, I could sense Adam was starting to tire. I bided my time but, knowing that Rob and Chris may start to close, attacked with just over two miles to go. It was really pleasing to get the win, and great to pick up the team prize as well – well done to the other lads on some great runs. Great to be part of such a strong training group, which is clearly pushing all of us on.” 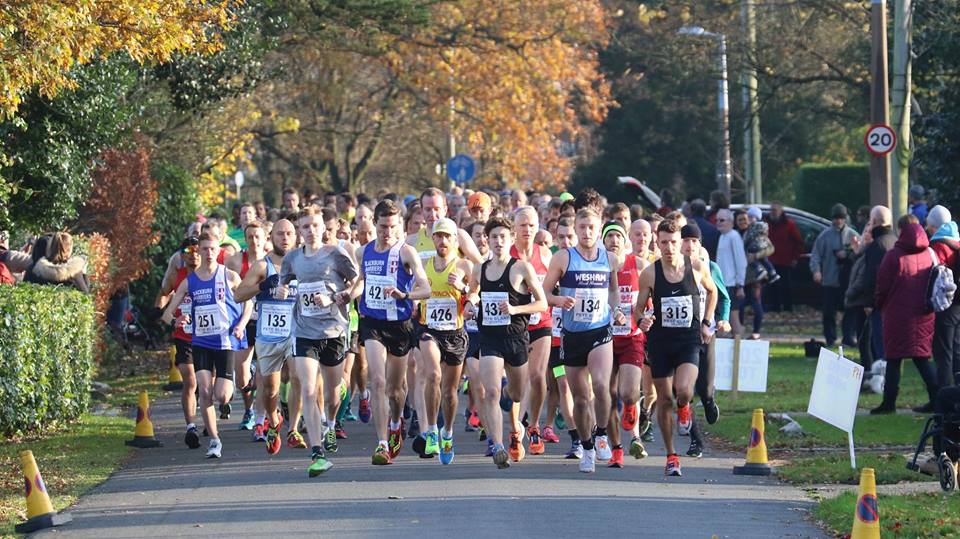 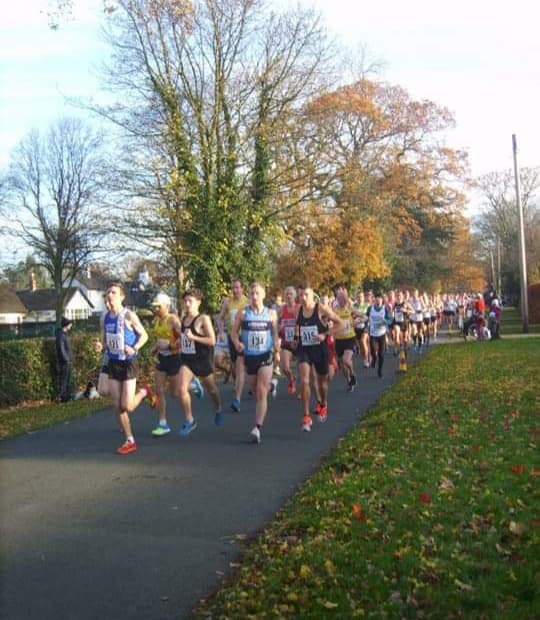 Karl Billington is going from strength to strength, evidenced by his 6th place today in a time of 54.23 and over a distance, which like Tim, he was making his debut in. Post-race Karl spoke to the Club commenting “Really happy with my debut 10miler, found the last mile tough. Lots of work to be done before Ribble Valley and the barca half”. 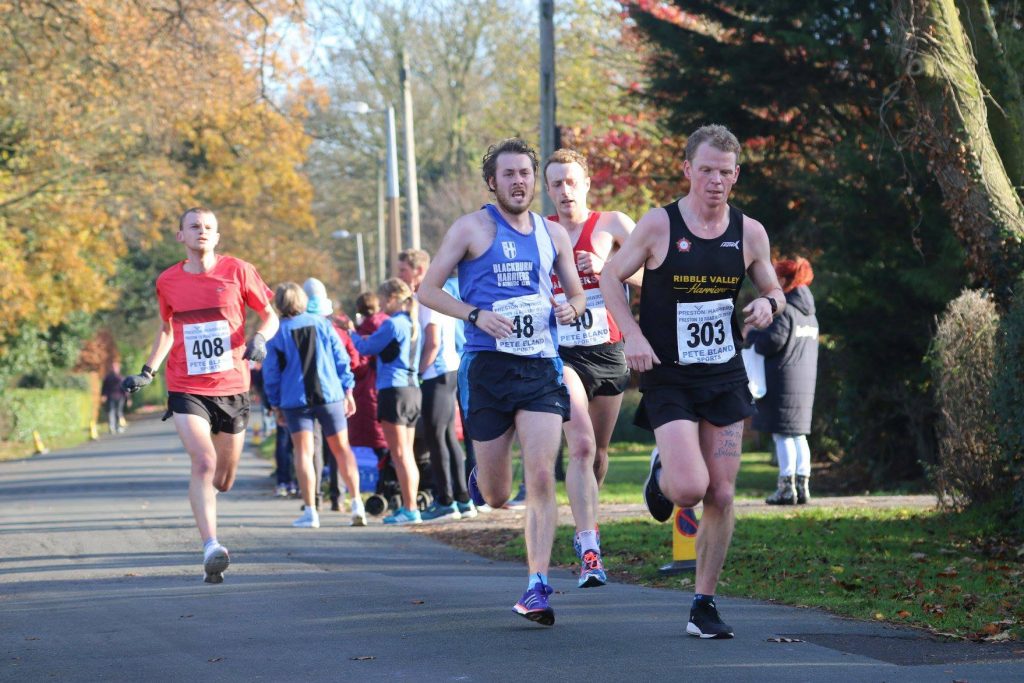 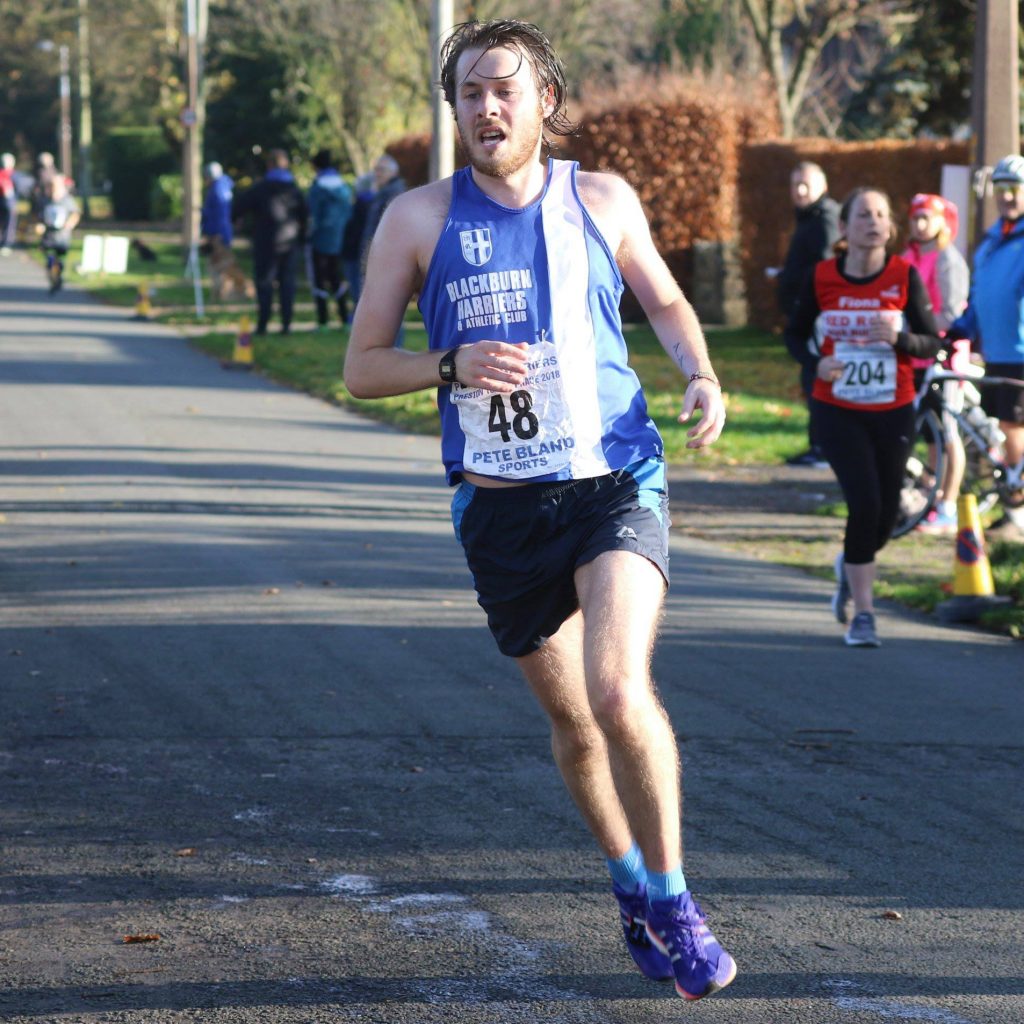 Next home for the Harriers was Chris Davies who was part of the Senior Men’s winning team the previous day at Rossendale. Chris ran just eight seconds outside of his personal best, posting a time of 56.14 in 10th place. Chris also won the V40 category too and afterwards told the Club about his weekend saying that he was “Really pleased with this weekends performance’s. Marl Pitts XC is always a tough race and I came away from that in good condition to have a good stab at the Preston 10. I started off the race feeling great and came through the 5 mile marker in good shape and on for a PB but unfortunately I got to 7 1/2 and knew I was starting to slow down. I got on to the duel carriageway and just had to dig it out with 2 miles to go and just missed out on a PB. Not to concerned though. It was a strong run after the XC and has only made me more confident in getting a PB at the Ribble Valley 10K. I’ve had a great year and it’s helped running with a great Senior group which has also been improving all year. Onwards and upwards”. 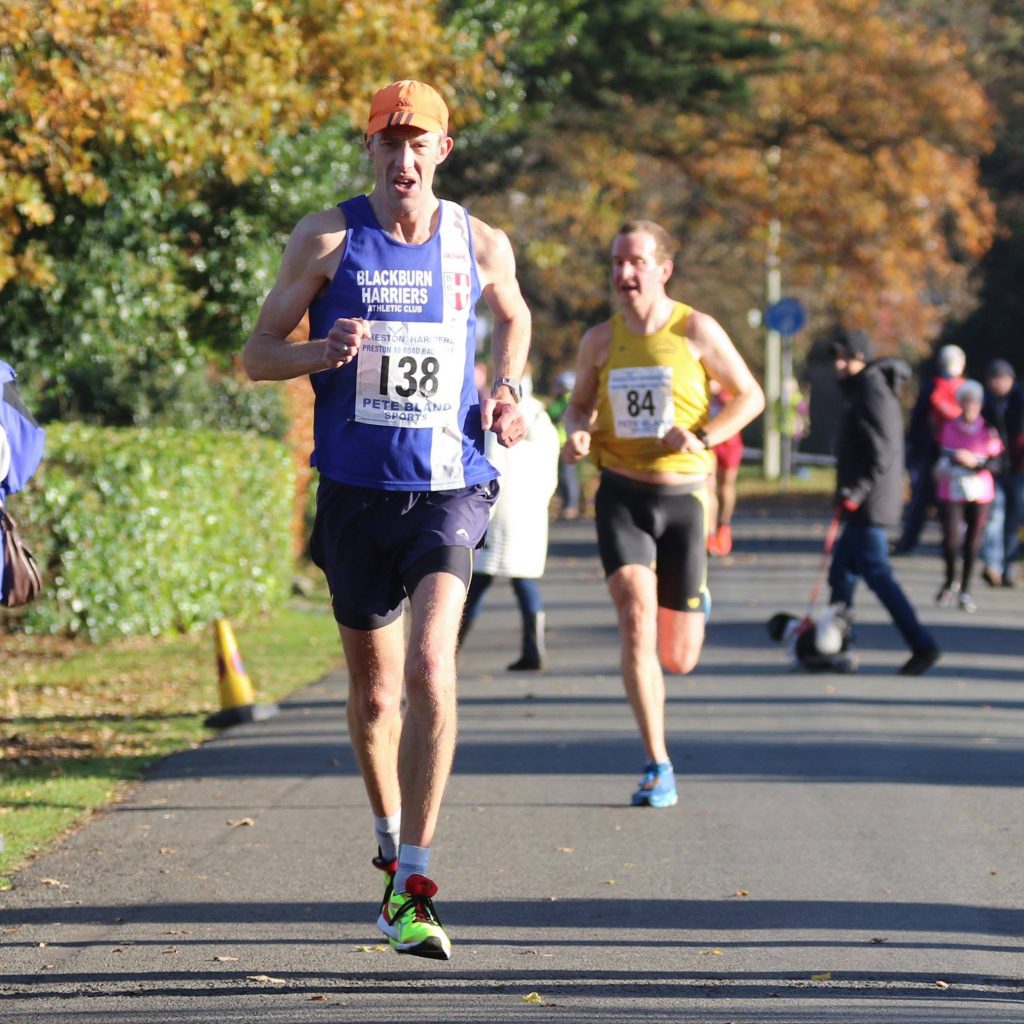 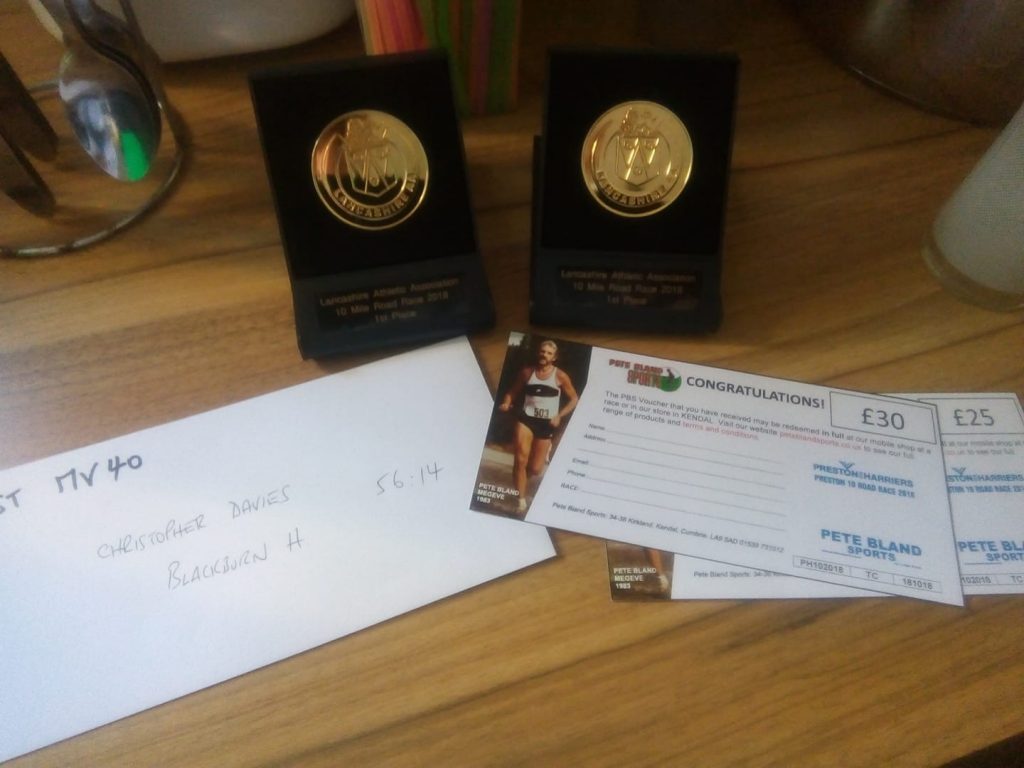 In 15th place came Calum James Holmes with a new PB of 57.40 which was a three minute improvement on his previous personal best over the distance and he, like Chris, ran in the successful Senior Men’s cross country team the day before. Calum commented about his weekend saying “I raced today even though I did Cross Country at Marl Pits. I felt okay doing it and was confident I was going to pb this morning at Preston. I finished 15th in 57 minutes which is five minutes better than last year, and also Blackburn won the Team race. I would also like to congratulate my team mates Chris, Tim and Karl who finished top ten”. 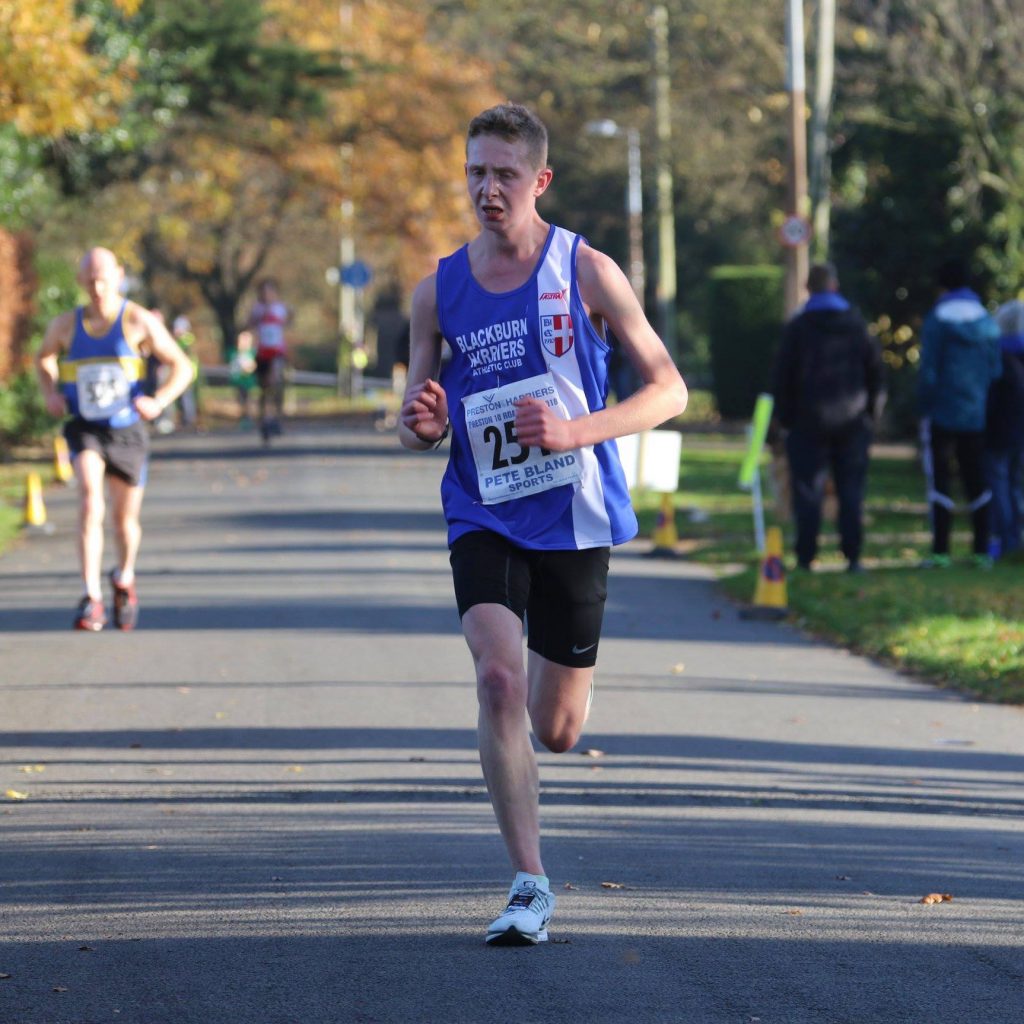 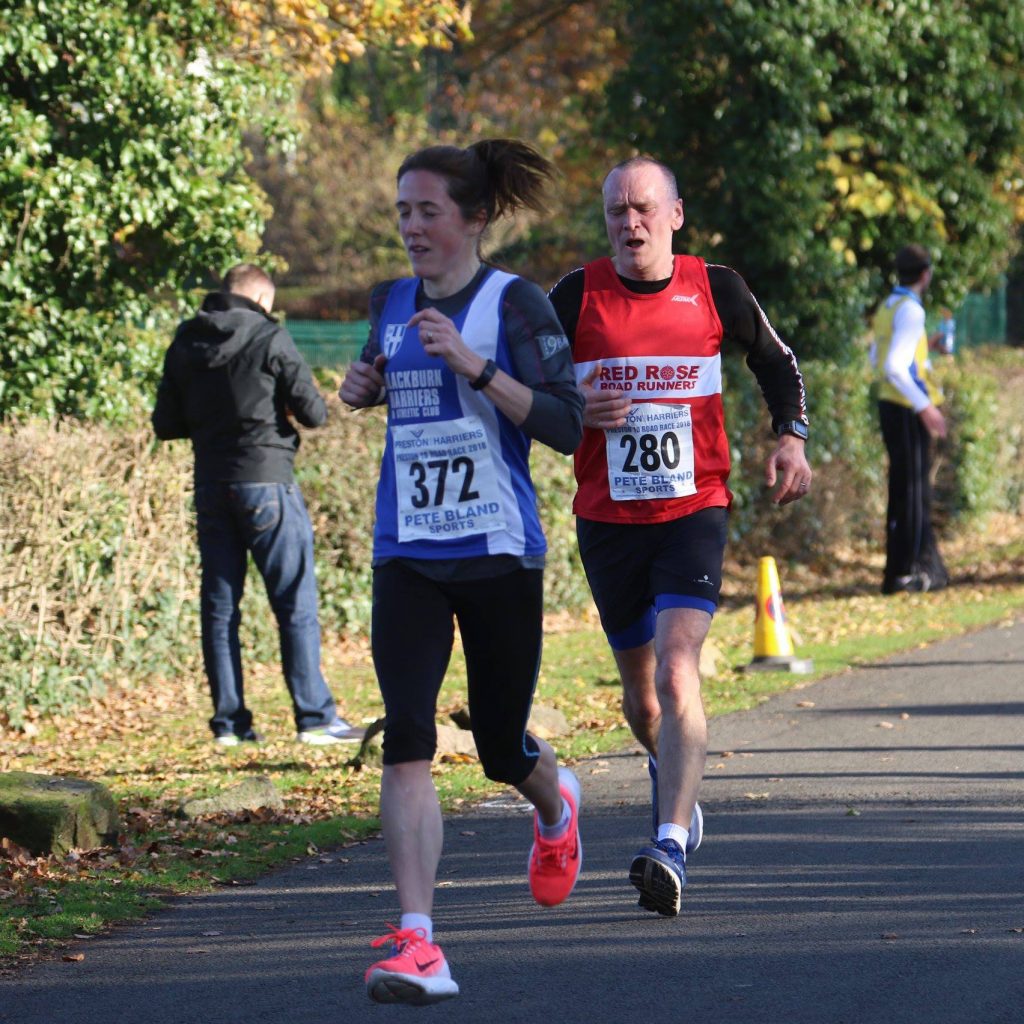 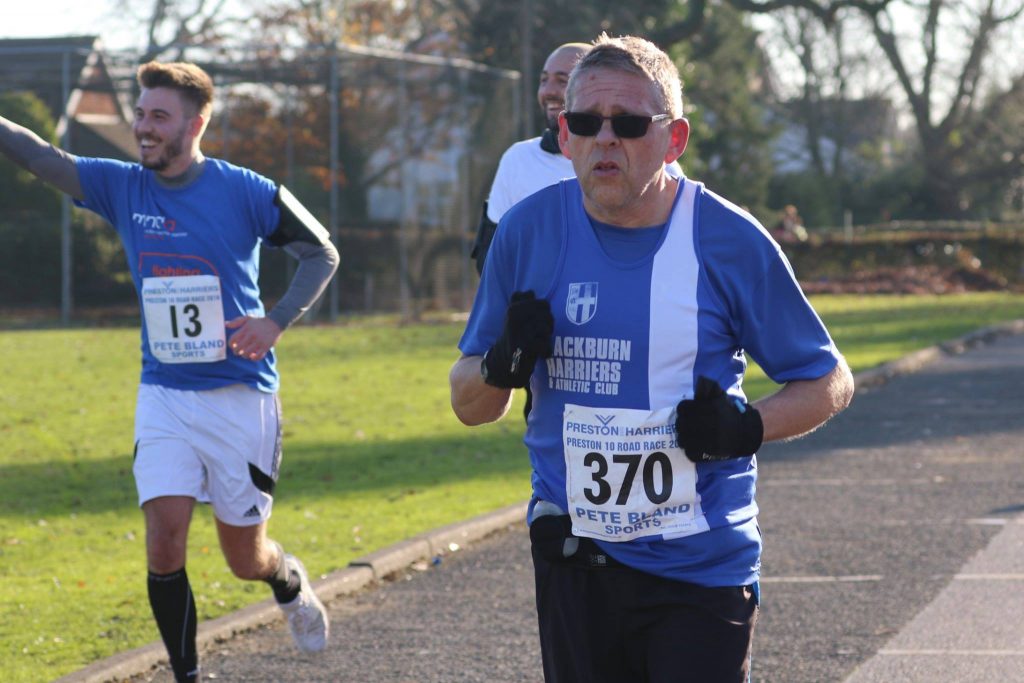 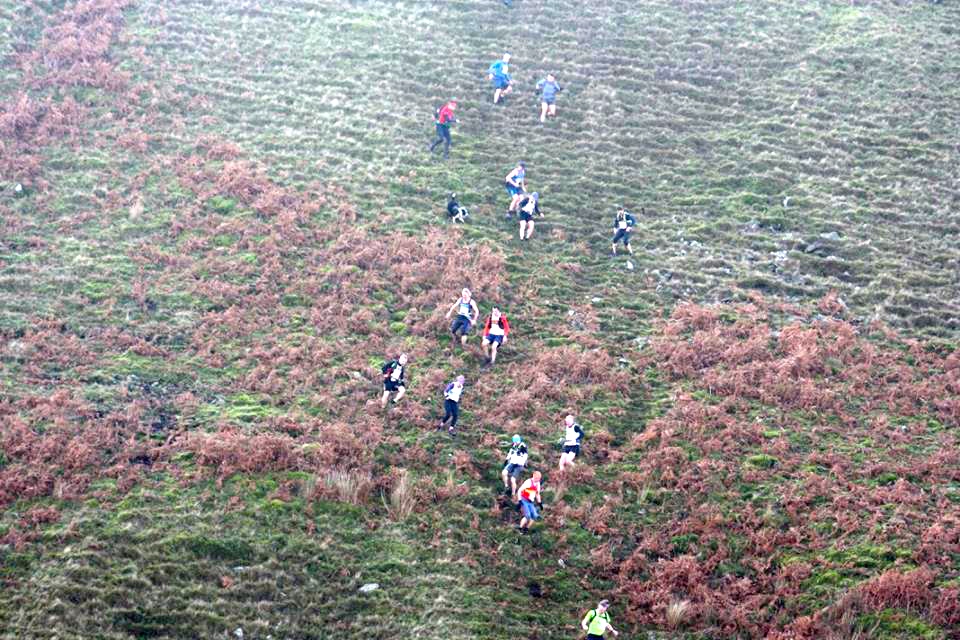 Four Blackburn Harriers were on the line for this race Helen Leigh – Danny Teare – John Horrocks – Gary Pearse – and it was who John led the way home as he finished in 54th position clocking 2hr 52 which was a pretty good performance given that John had been plagued with an injury.  After it was all over, John spoke to the Club about the day and his race saying “Tour of Pendle. What a race. Good day for it with a coolish wind on the tops. Coming into it I’d been struggling with an slight injury so not been able to do the training that I wanted to so I aimed to be under 3 hours. Stood on the start line I said to myself set off steady and try to pace it, that went in the bin as soon as go was shouted. Managed a good pace to the bottom of geronimo where I was happy to see my dad for some good old jelly babies and a Capri sun. Worked a treat and kept me going to the top of mearley climb. At this point I was placing early 30’s and felt good to push for top 30, then the dreaded big end climb came and I blew up. From the trig point back down to the finish at barley was the longest 2.5 miles I’d ever run. Ended up 54th in a time of 2 hours 52. Veg soup never tasted so good! Definitely be back next year. Well done to all the harriers who ran and thanks to the marshals as always”. 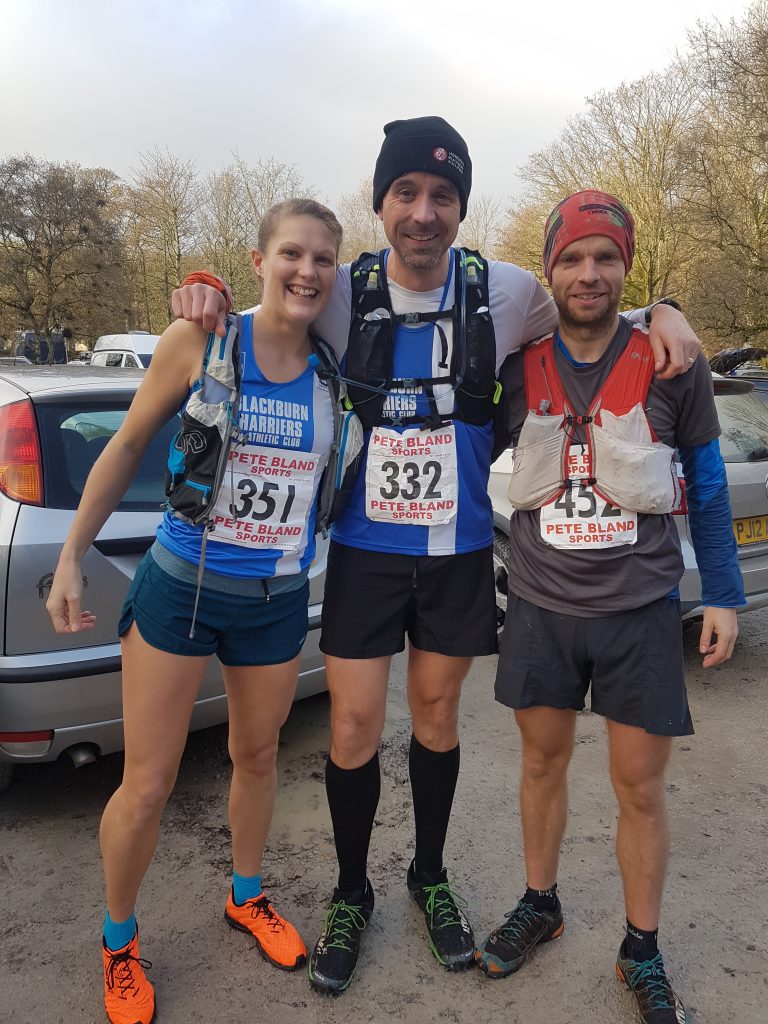 Fabulous to see Helen Leigh back on the Fells racing again. This athlete has gone through more injuries & operations than you can shake a stick at, but her determination knows no bounds as she showed at the weekend and as she told the Harriers afterwards “The Tour of Pendle is not for the faint hearted and there’s not many races tougher when it comes to fell racing. Just shy of 17 rough miles and 5000ft of climbing, my only real aim was to get round with both my hips still intact! I tried to pace sensibly and despite fuelling well, I still started cramping from about mile 10 where the real hard work begins. I found myself in a good position and was chasing hard for 3rd but had to settle for 4th in the end and 98th overall in 3.02. In super windy conditions I was over the moon with this, and so so happy to have finished a race in one piece after a near 3 year hiatus!“ 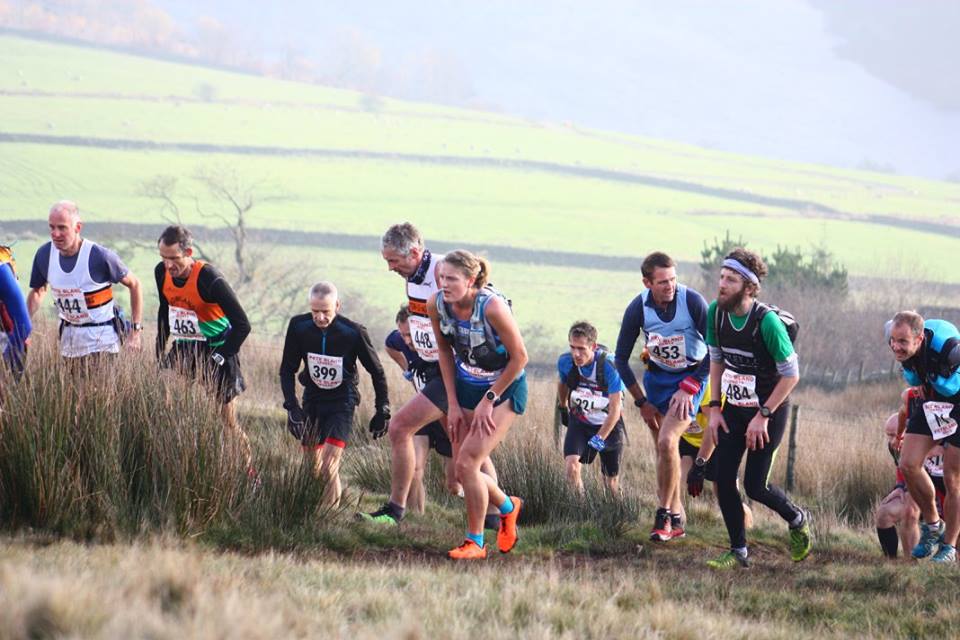 Gary Pearse having competed in the Short Circuit 33 mile race just a couple of weeks ago was the next athlete in for the Harriers. Speaking after the race Gary said that it was a “Good day conditions wise, but the usual Pendle cloud was hanging on the tops and it was windier than expected from the calm conditions in Barley. I risked running with a long recent outing in my legs which proved my undoing, but as I was also raising money for Rosemere Cancer Foundation I was definitely completing the race. Great to see Helen Leigh back racing and John Horrocks in good form. The usual healthy pace on the road out was checked by the first climb to the Trig.  It was lovely to run for a short while with Helen before she showed me a clean pair of heels. Wheels well and truly came off on the second to last big climb/decent and I was on the edge of cramping entirely before I hit the road and stretched out again on the run in. It was brilliant to see Helen and Jean at the finish. Great to be out again in this iconic fell race and especially well done to Helen and John.

I would also like to add to the tributes to George Kirby, a time for reflection and celebration of a remarkable person”. 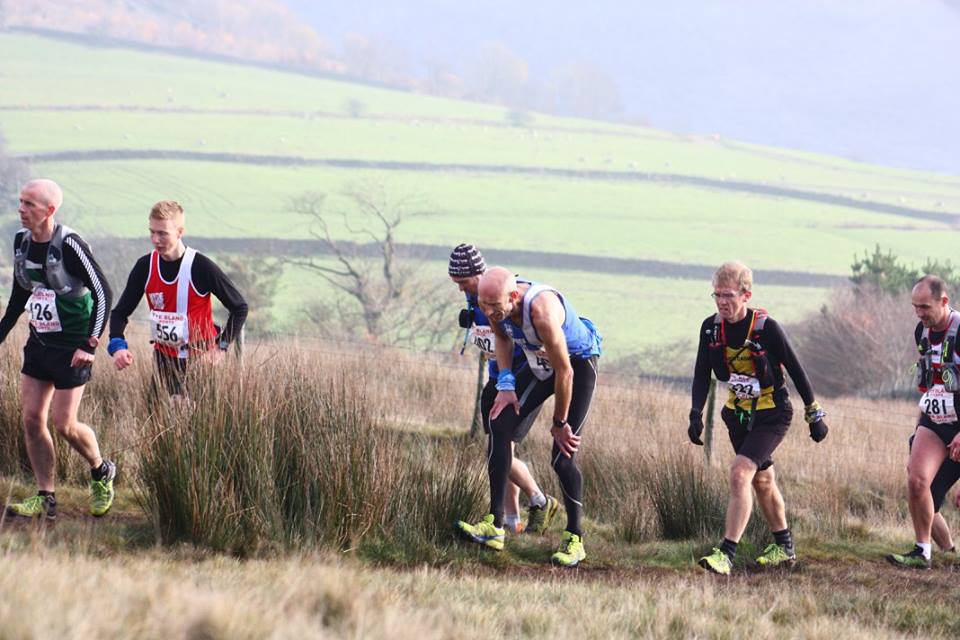 Danny Teare unfortunately had to drop out of the race after looking forward to it, but said post-race that it had been “Fantastic conditions for the race, with over 500 pre-registered.  Several Harriers on the list and many familiar faces lined up.  I was raring to go and felt well prepared. Training had gone well, no injuries and the pre-race fuel was all safely on board.  Half way round I was a few minutes ahead of last years pace and feeling like I could eek out a bit more in the second half.  However, half way up the climb from checkpoint 5, I realised I was shedding places and couldn’t seem to get my head down and push on.  I took shelter at the top and took more fuel + drink on board, letting it settle for a new minutes before heading off again….. but after a further 500m, I just didn’t feel confident that I could take on the last 2 climbs without having to bail out.   I opted for safety first, took a right hand turn and headed back to Barley under my own steam.  Disappointing not to finish but glad that I didn’t get into a difficult situation that would have put stress on myself and the marshals.  Great event as ever and very well run.  Good turnout from BBH and well done to all who took part.  (I will look to put it right next year!!)”. 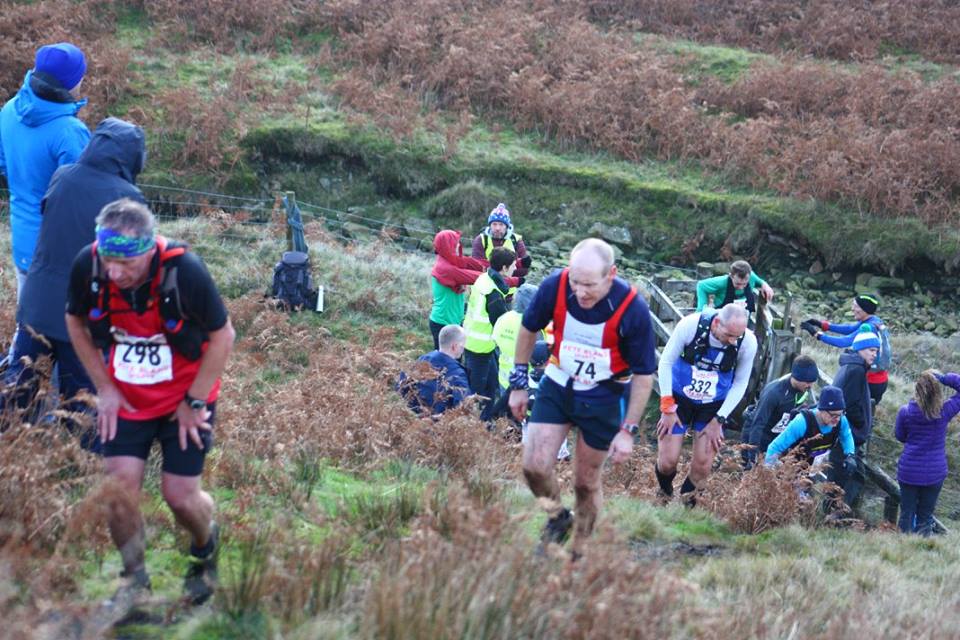 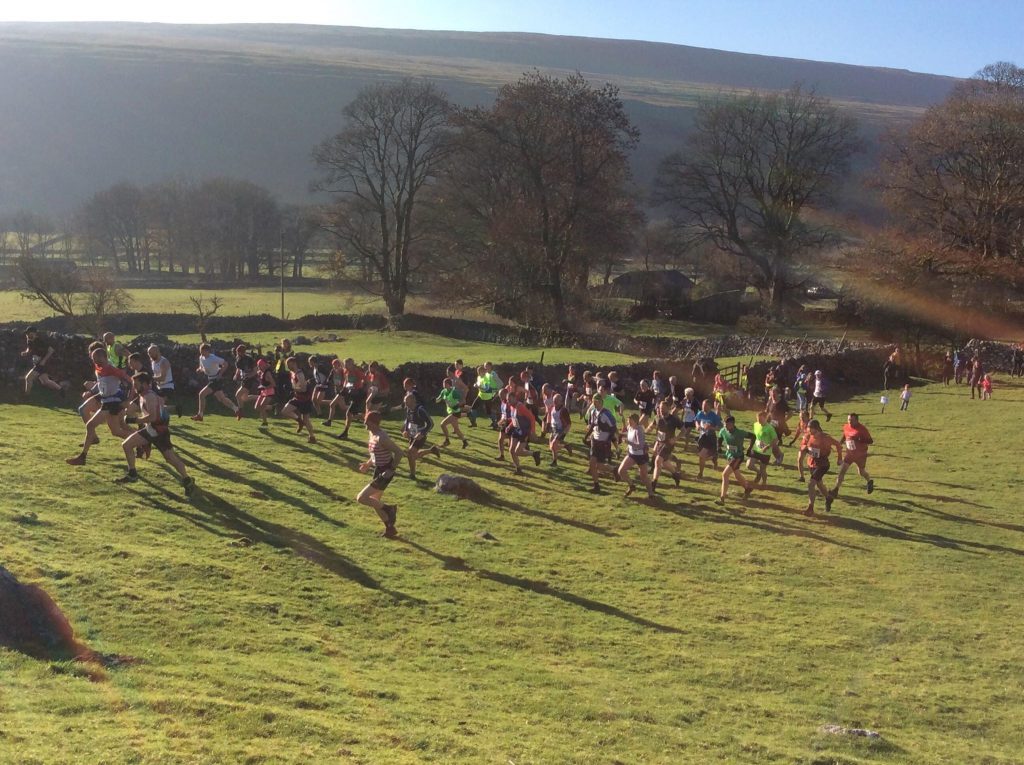 John Orrell and Ian Clarkson ran this fell race which was a new one on the calendar and won by Ted mason of Wharfedale in a time of 36.44. John placed 47th overall in a time of 56.22 whilst Ian came home in 51st spot clocking 57.58.

John enjoyed the race and commented afterwards “A new race, and having no idea where we were going apart from around Birks Tarn at the top, it was a case of keeping your head down and just keep moving forward, upwards, upwards and more upwards! A beautiful day but a climb that seemed to never end. 22.49 before I reached the trig at the top. Then a loop across the moors and around the tarn, before a ‘not so fast’ decent (11.32) on steep rocky slippy limestone. A bottle of specially brewed fell race beer and chip butty at the end. What’s not to like about Fell Running!”

Ian was equally effusive about the race commenting “1st time this event was hosted, a BS cat race, 4.8 miles and just over 1200 feet of ascent, a flat plateau on the top, views to die for and then 1200 feet of decent!! A bit of a tough one, but for a fiver entry fee, which included a bottle of beer and a chip butty, what was not to enjoy. Having been out of action with a dodgy ankle for a couple of months it was great to have a go and see what happens, ankle survived and some confidence restored. Looking forward to the David Staff Memorial Fell Race next week”. 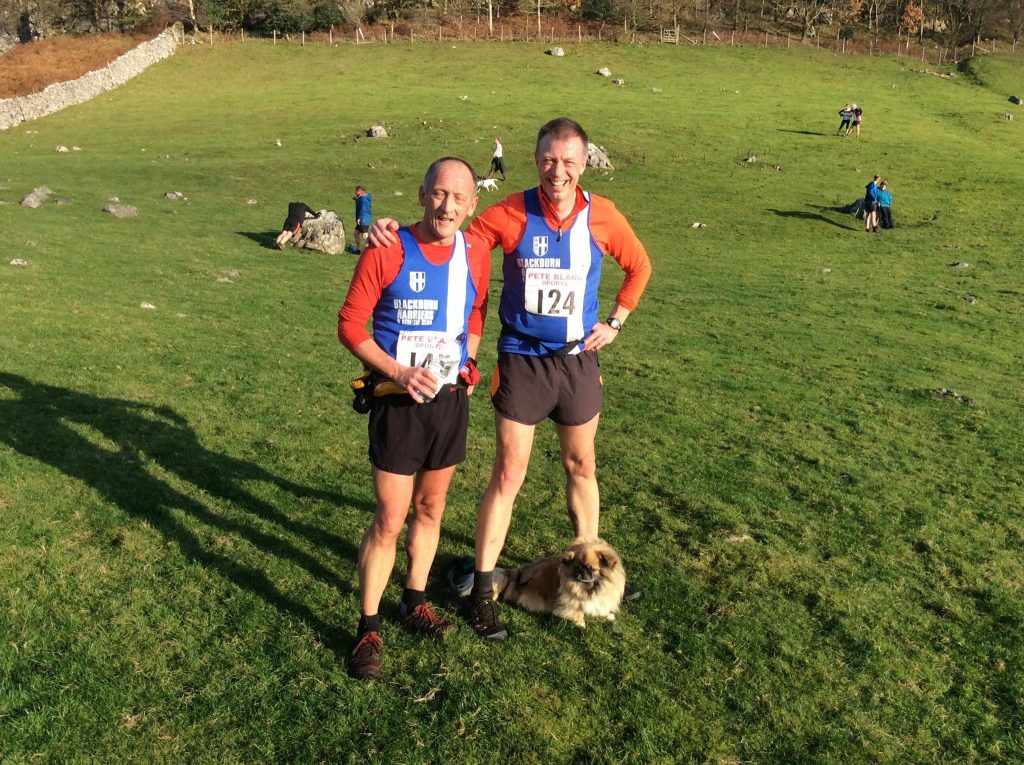 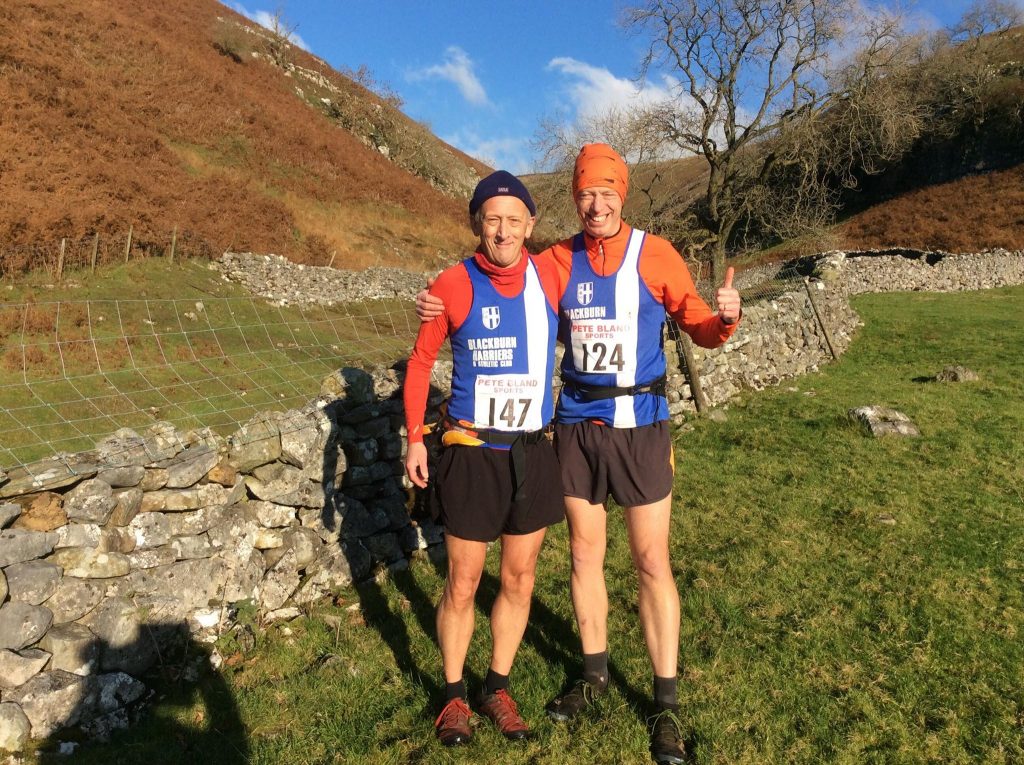 Paul Jeffries has a recent set back with a hip bursa, but felt good enough to run the Lytham Windmill 10k on Remembrance Sunday.  V40 Paul finished 41st place overall on the day clocking a time of 41.52.89 out of race featruing 1227 finishers. Paul told us afterwards that “it was a better run than I could of hoped for”. 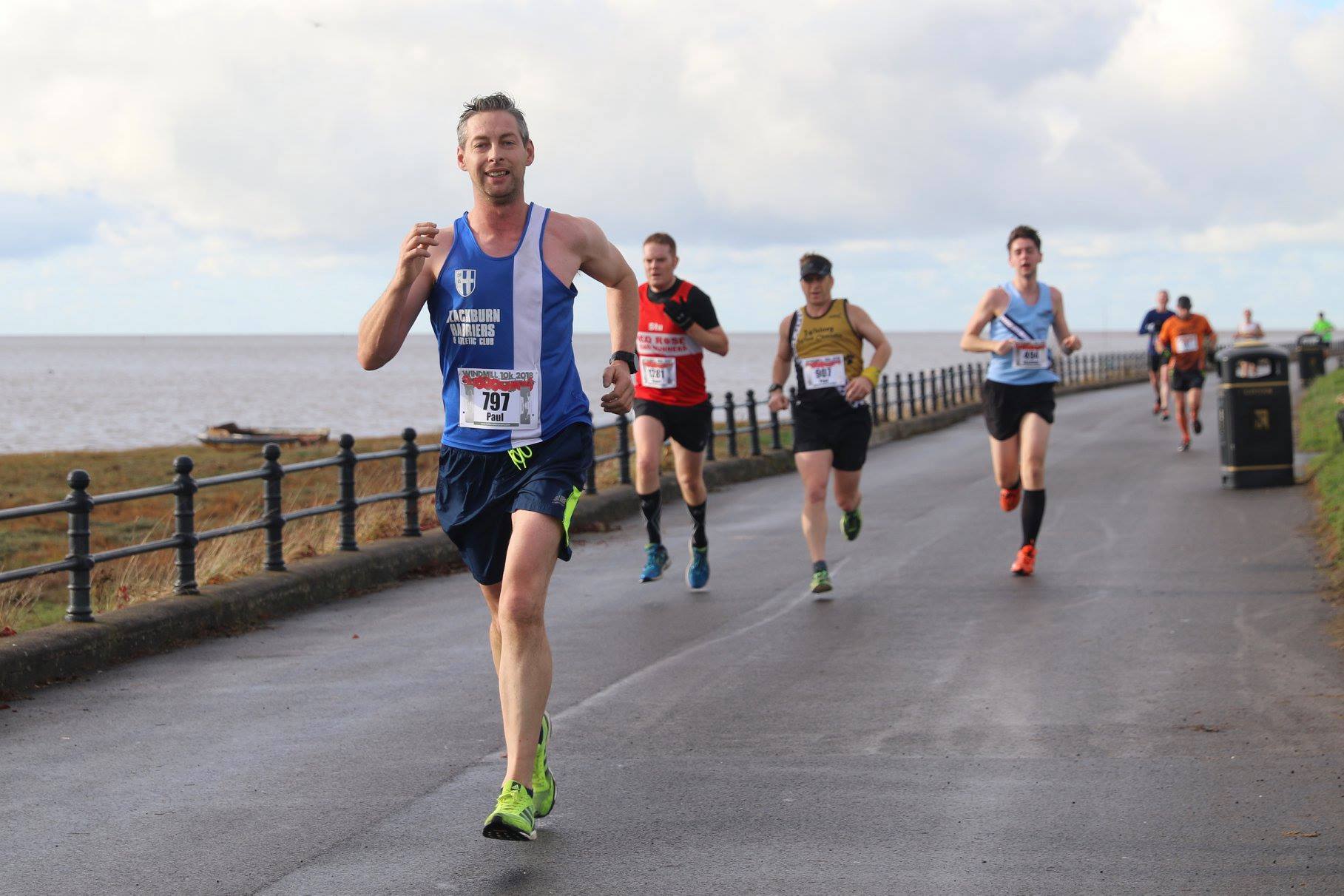 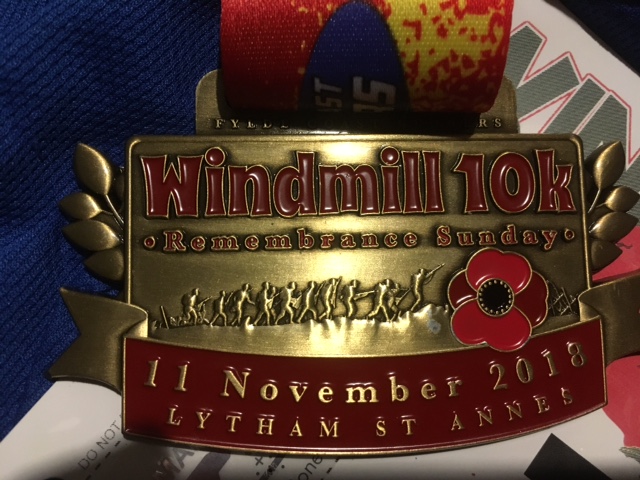 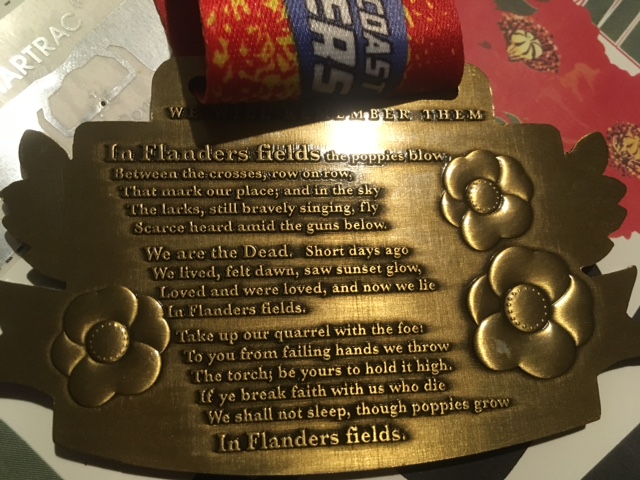