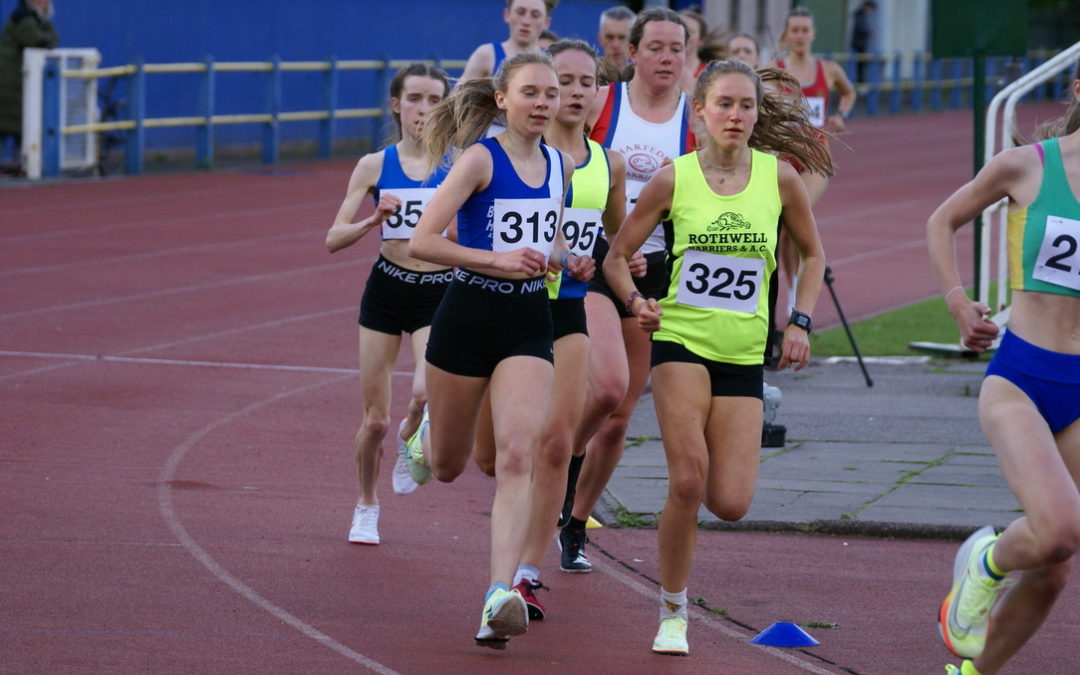 Another positive night for Blackburn Harriers following the athletes performances at the Sportcity BMC on Saturday evening (May 29th). Last night on a sometimes gloomy evening alternating between a little bit of sunshine, overcast and cloudy with a threat of rain, the athletes put in some quality races, producing wins, new personal bests and another Club Record. First up were the U15 800m races in which Oliver Gill and Matthew Haxton lined up – Oliver in Heat 1 and Matthew in Heat 2. Oliver has had a really good start to his season improving his 1500m time by 20 seconds from 2021 – currently at 4.26.40 and also set his 800m personal best of 2.07.00 in winning at the UKYDL recently. Oliver worked his way through to the front two to finally take 2nd place with a time of 2.07.39 whilst Matthew did exactly the same as he clocked 2.24.63 in 2nd – just three tenths outside his personal best having now taken two seconds off his best time set in 2021. 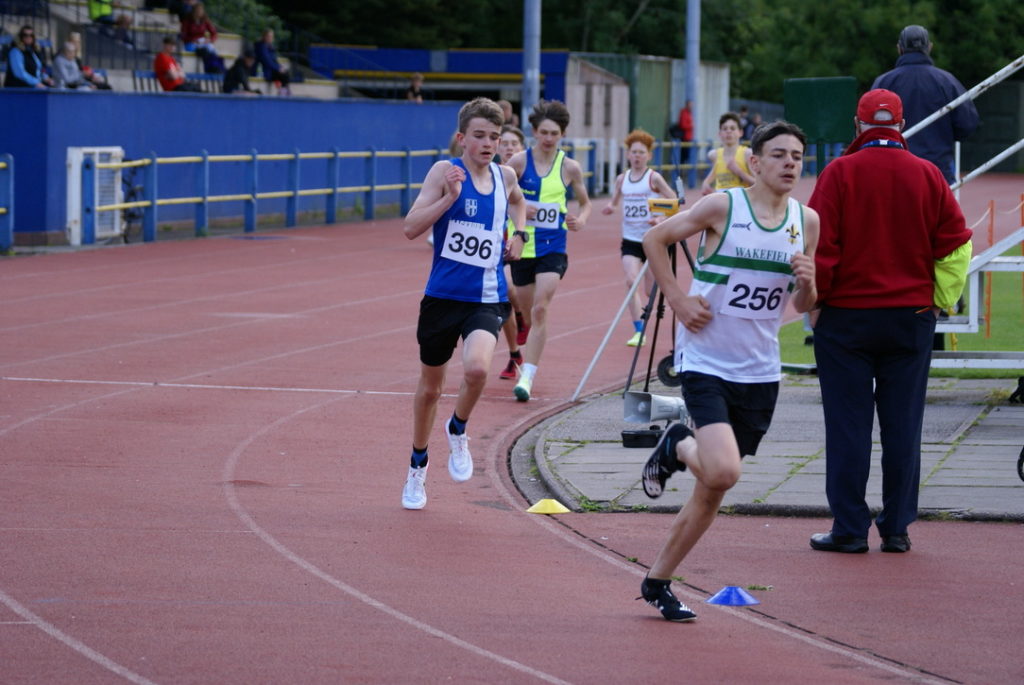 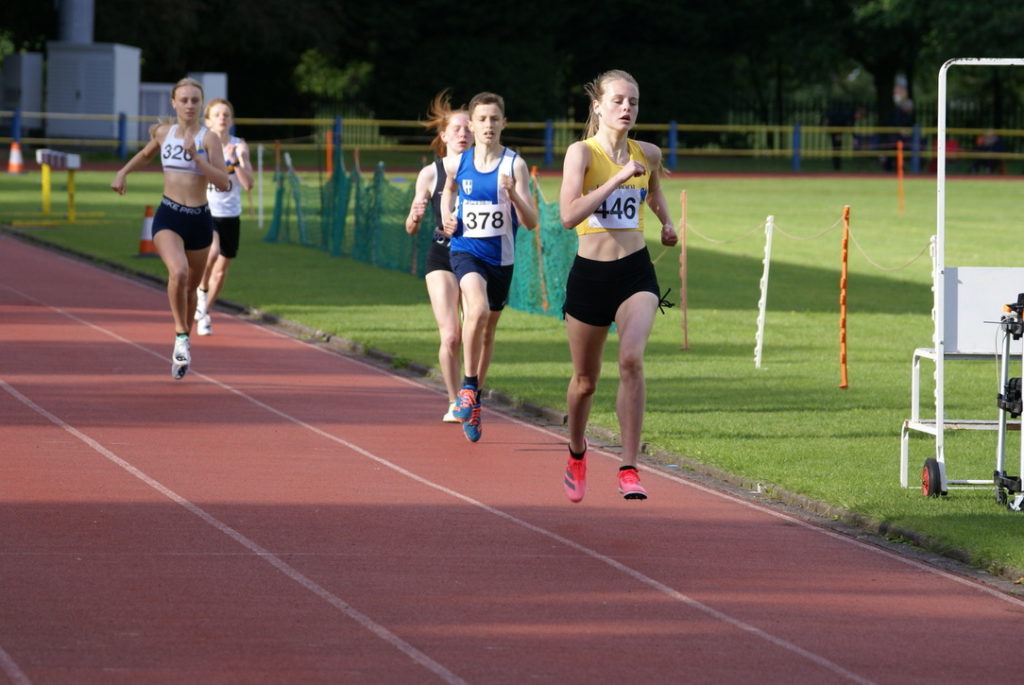 Next up were the 3000m Races which featured four Heats – Blackburn Harriers U20 Matt Ramsden going in Heat 1 and U17 Isabel Holt going in Heat 3. Matt had just won the BMC 5000m at Sportcity only three days before with a new personal best time of 14.18.97 which sees him at number 6 in the national rankings, whilst in the 3000m rankings, Matt started the evening with a personal best of 8.33.55, his previous outings over the distance in 2022 being his Northern Indoor Championships Gold Medal won in January and his Gold Medal won at the Lancashire County Championships in May. The race proved to be highly contested with the first five all producing new personal best times. Matt was up against it with just over 150m to go – Birchfield’s Thomas Beasley and Doncaster’s George Rowland making their bids for the win. Matt won it with a great sprint finish going past Rowland then Beasley to take the win in a new PB time of 8.21.16 – a 12 second improvement – with Beasley in 2nd (8.21.82). Matt’s time puts him 8th place in the 300m national rankings.

Isabel’s heat featured 18 athletes covering U17’s, U20’s Seniors and vets. Isabel had only just competed two days ago at Wigan in the UKYDL Upper Age group league where she had lowered her 3000m time from 10.24.50 to 10.15.00 in winning and gaining the English Schools qualification time for the distance. Running even pace, Isabel kept a good position throughout to finish in a real battle against Vale Royal’s Grace Roberts (10.01.07), Rothwell’s Jasmine Trott (10.01.31) finishing 8th place with a new PB time of 10.01.60, some 13 seconds faster than her previos best set just 48 hours previously. In addition, Isabel broke the 29yr old U17 Club Record held by Kimberley Robinson (10.02) and set in 1993. 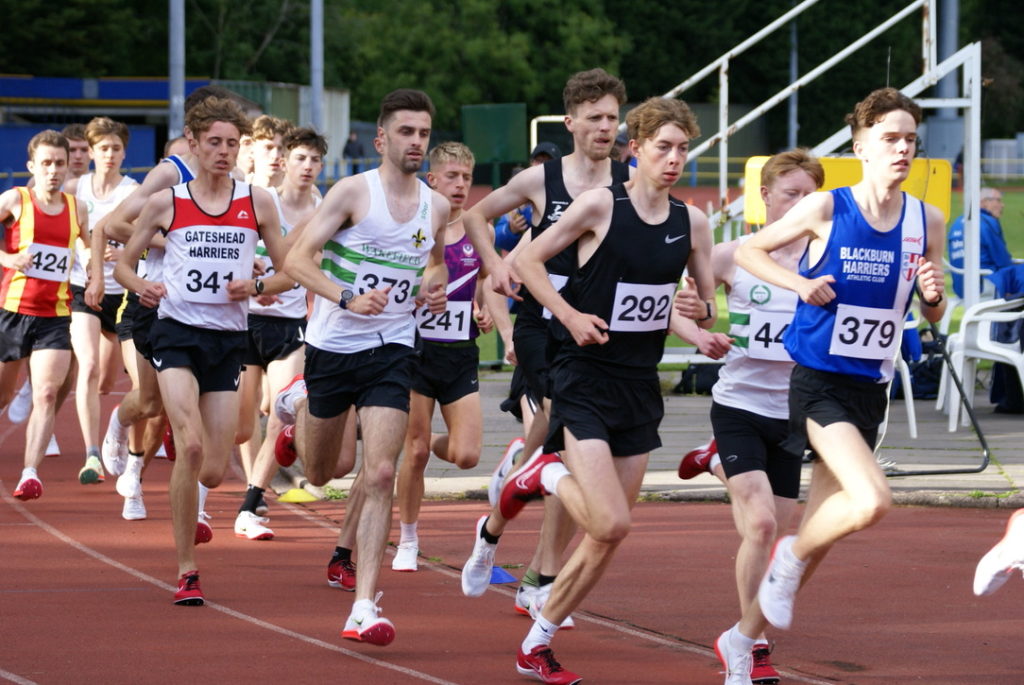 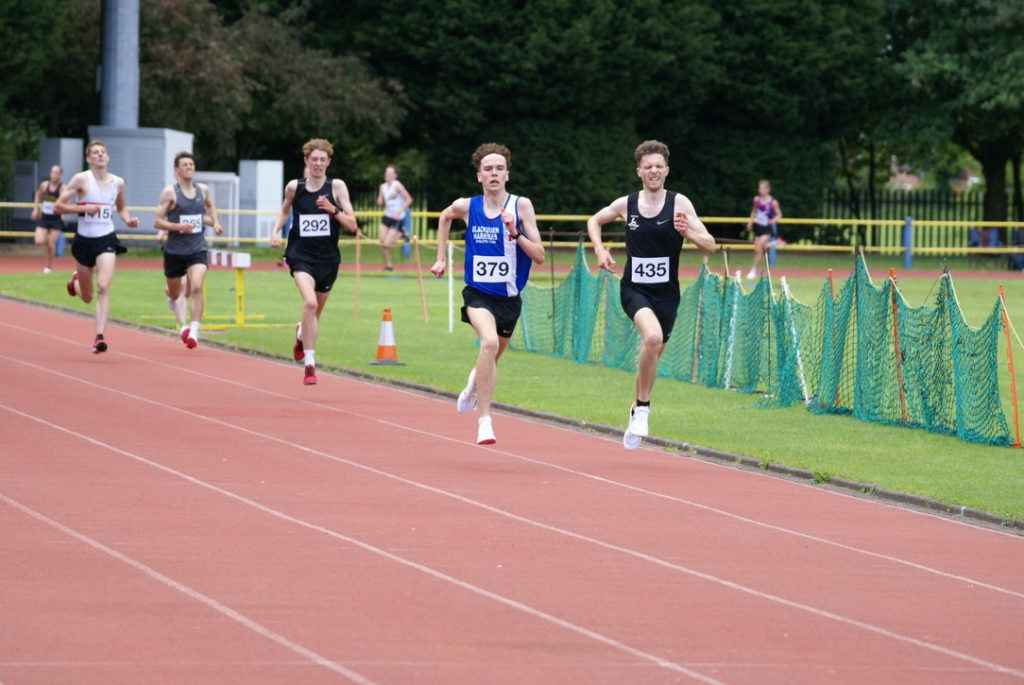 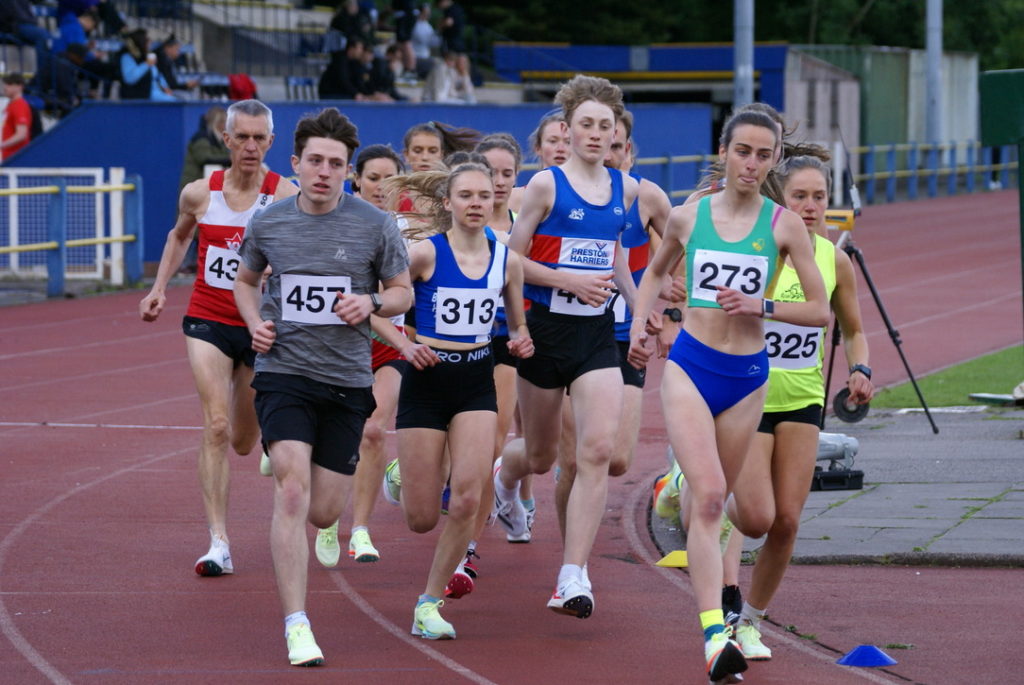 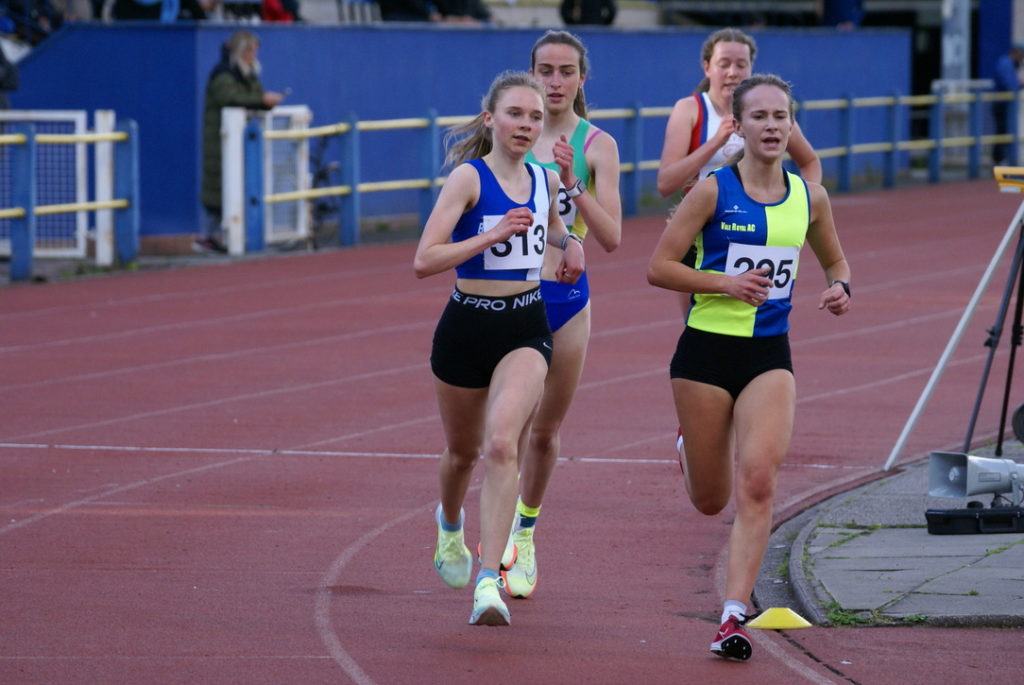 Back to the 800m races and this time Joe Gebbie – studying to be a doctor at Leeds – was racing in only his third track race of the year – clocking 1.58.88 at the BMC in April followed by a 4.04.27 1500m at Bucs also in April. With exams in the way, this was his first opportunity since then. With a personal best time of 1.55.90 Joe was hopeful of threatening that and wasn’t far off as he gave everything in the home straight in finishing 4th in 1.56.54. Ben Makin was next up in the Heat 2 entering with a best of 1.57.20. In a heavy training block for the Modern Pentathlon as a member of the Ireland Team, Ben wasn’t far off his best in clocking 1.58.38 in 3rd after having taken on the pace right from the start in an attempt to move the race on. Jamie Teare made a last minute decision on the night to run the 800m – his only race since 2021 being a 5k road race in the Isle of man in April. With a personal best of 1.55.80, he entered the race in what might be considered unknown territory. On the night he ran a very even paced race to clock 2.00.91 in 5th place.

Bottom of age U20 Abigail Stratton was another athlete who had won her race at the Sportcity BMC meeting setting a new 1500m personal best time of 4.28.45 – placing her at number 13 in the national rankings. Going into the 800m on the night with a best of 2.14.70 Abigail always looked confident and surged to the front in the closing stages to set a new PB time of 2.13.09 with Preston’s Imogen Blackwell in 2nd (2.16.00). U20 Eleesha Charnley and U17 Keira Haxton were in Heat 9 on the night which set off with a very quick first 200m resulting in Eleesha running 2.21.02 in 4th spot with Keira taking 6th place in 2.31.64. 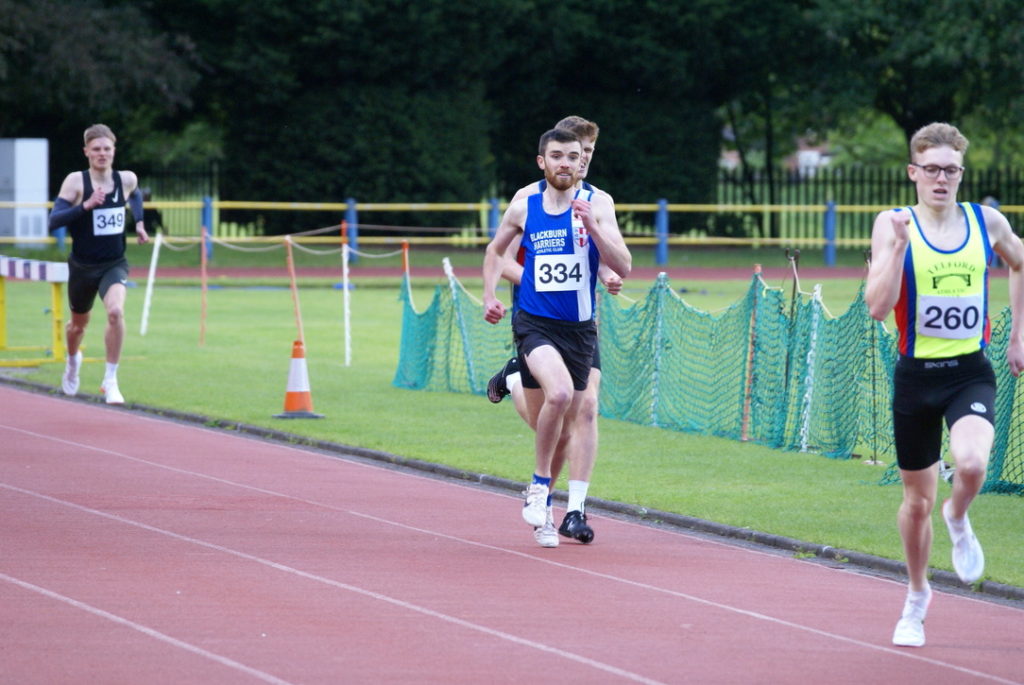 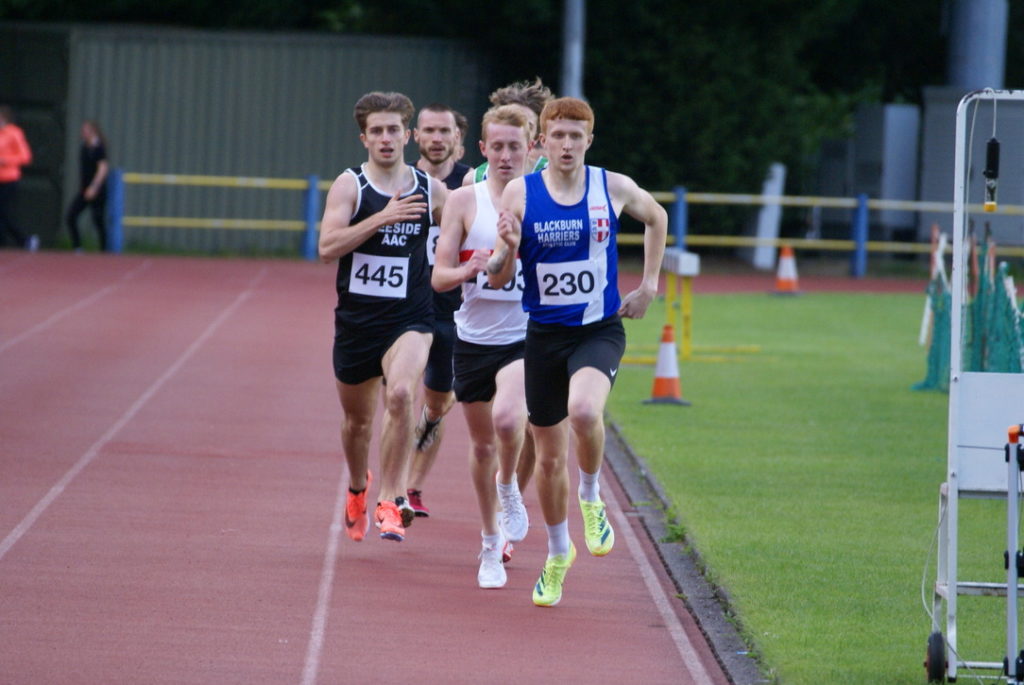 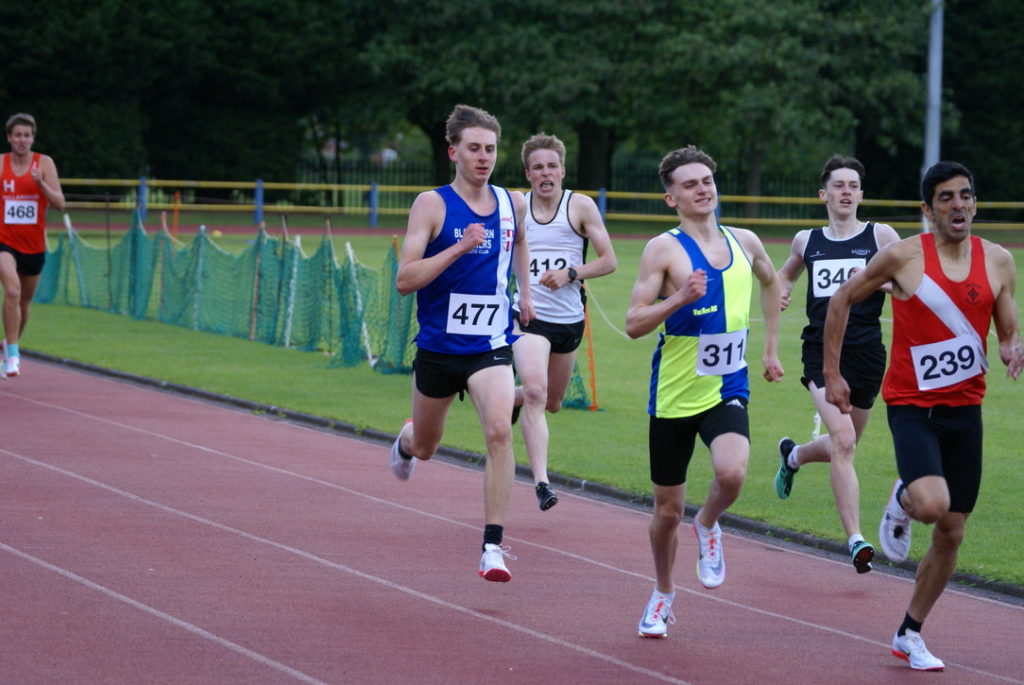 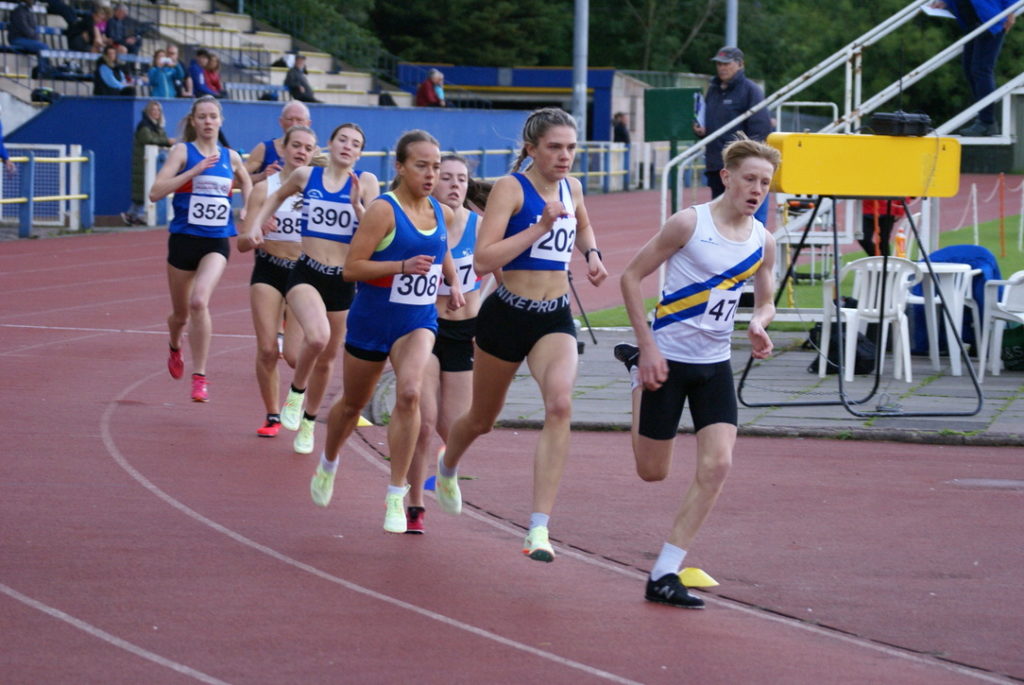 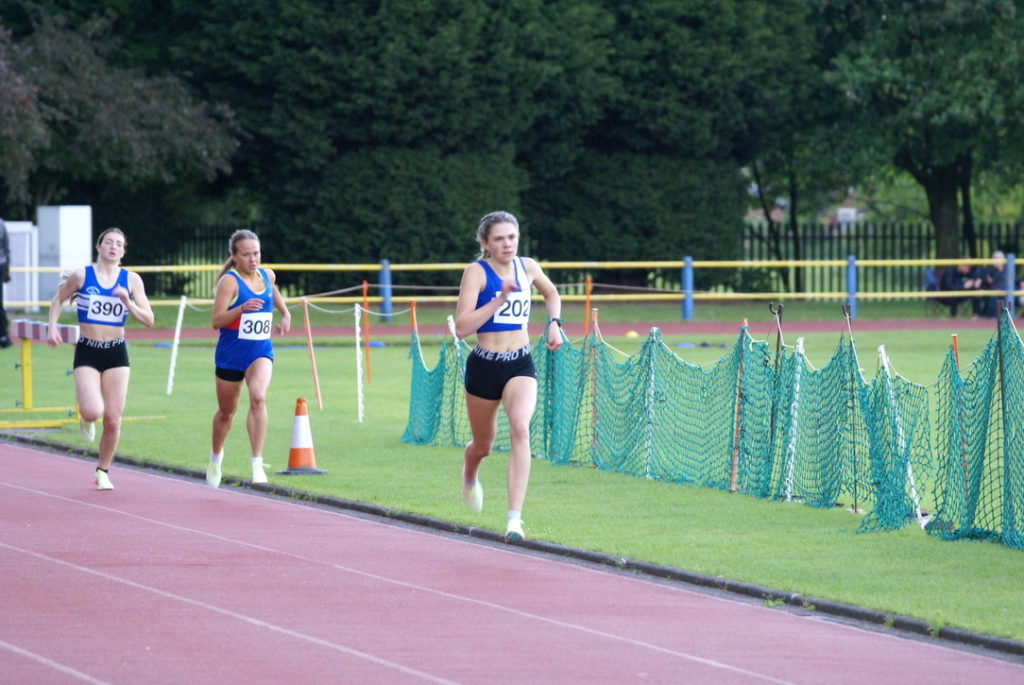 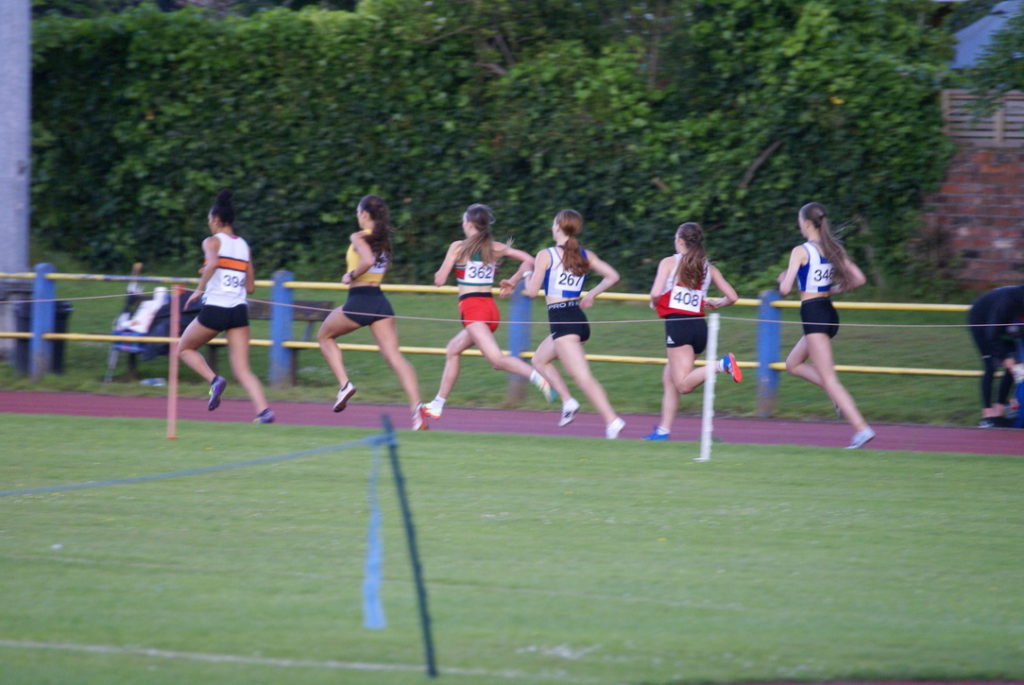 Bottom of age U17 Jack Lamb is in hist first season with the the Club and has just one track race under his belt so far. Coming into this race with a 1500m best time of 4.36.30 set in 2021 at the Mid Lancs League, Jack showed how much he has come on as he finished strongly in the race to set himself a new PB by nearly 8 seconds, taking 3rd spot in 4.28.73. 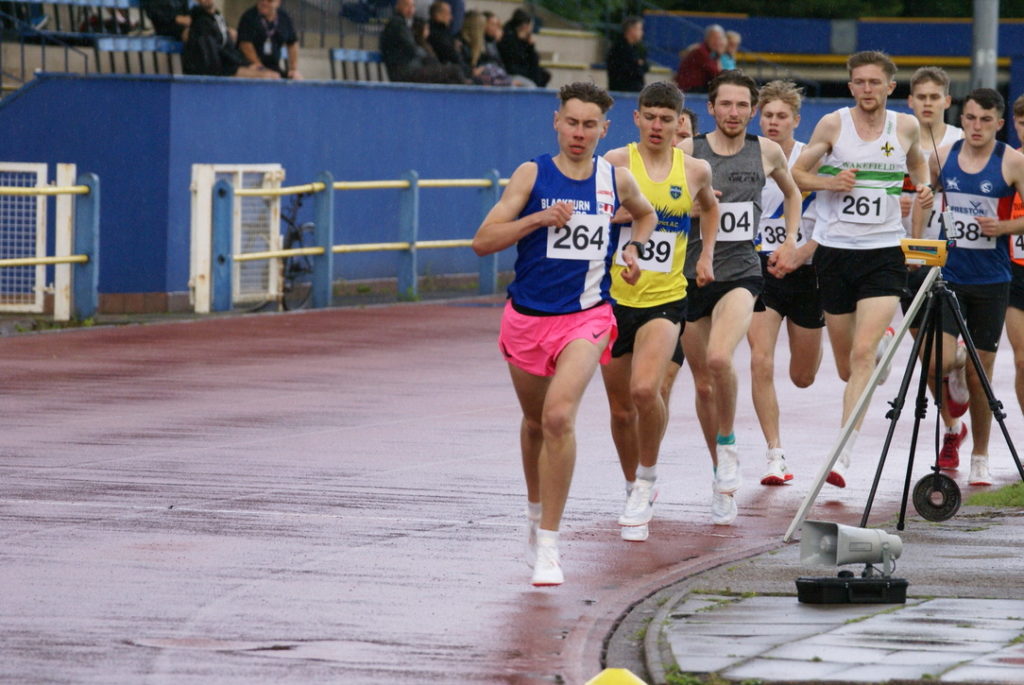 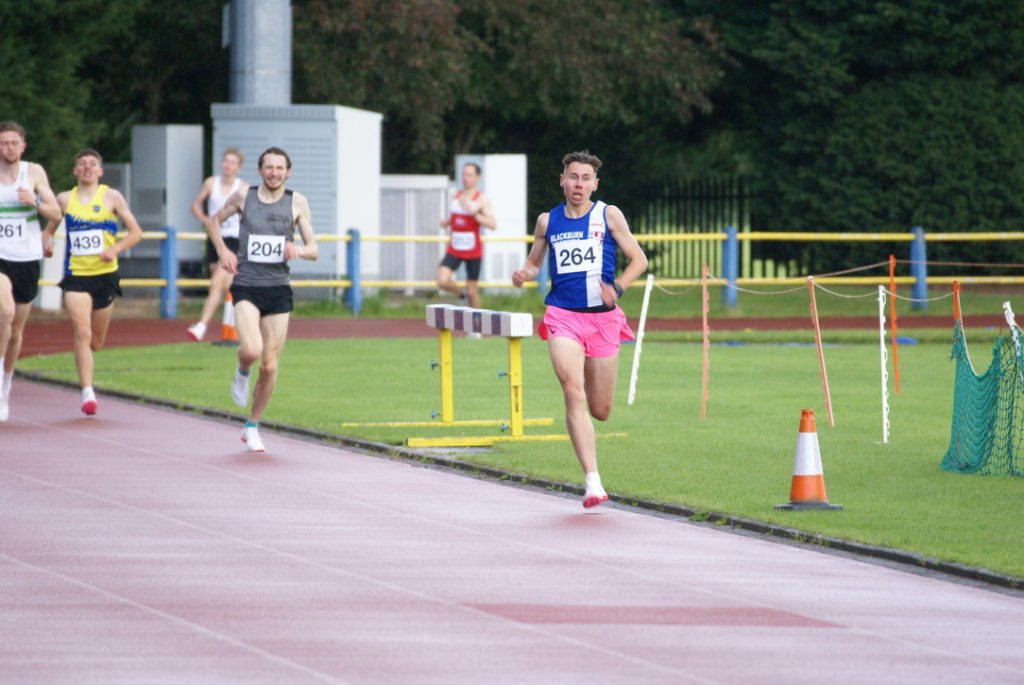 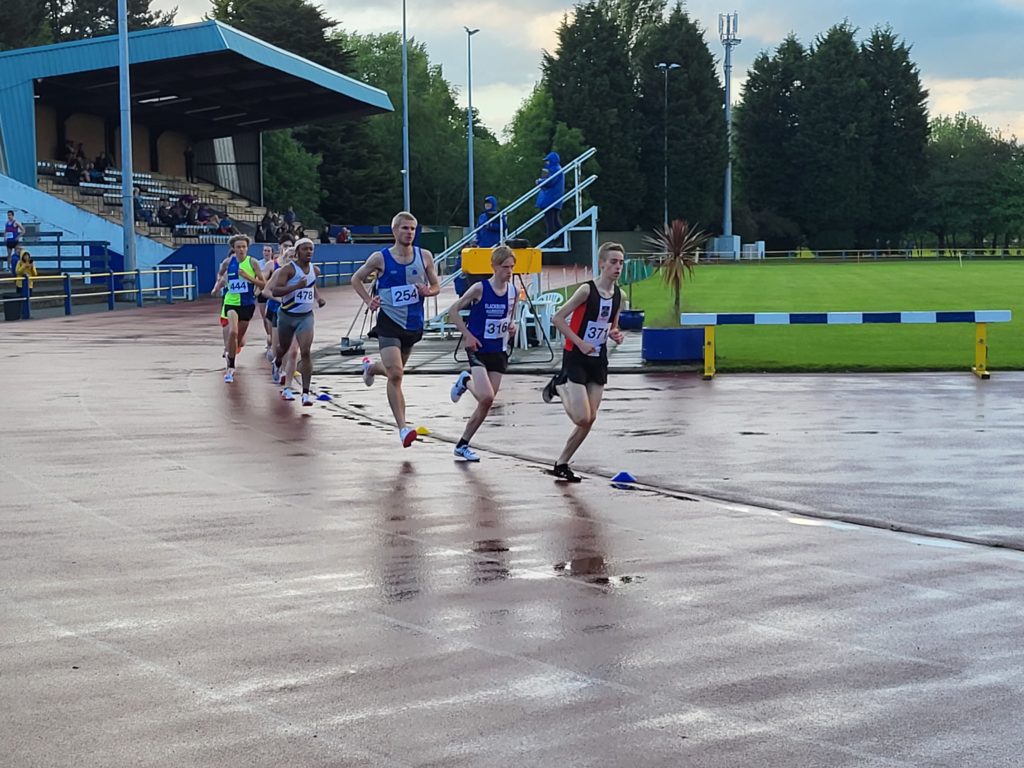