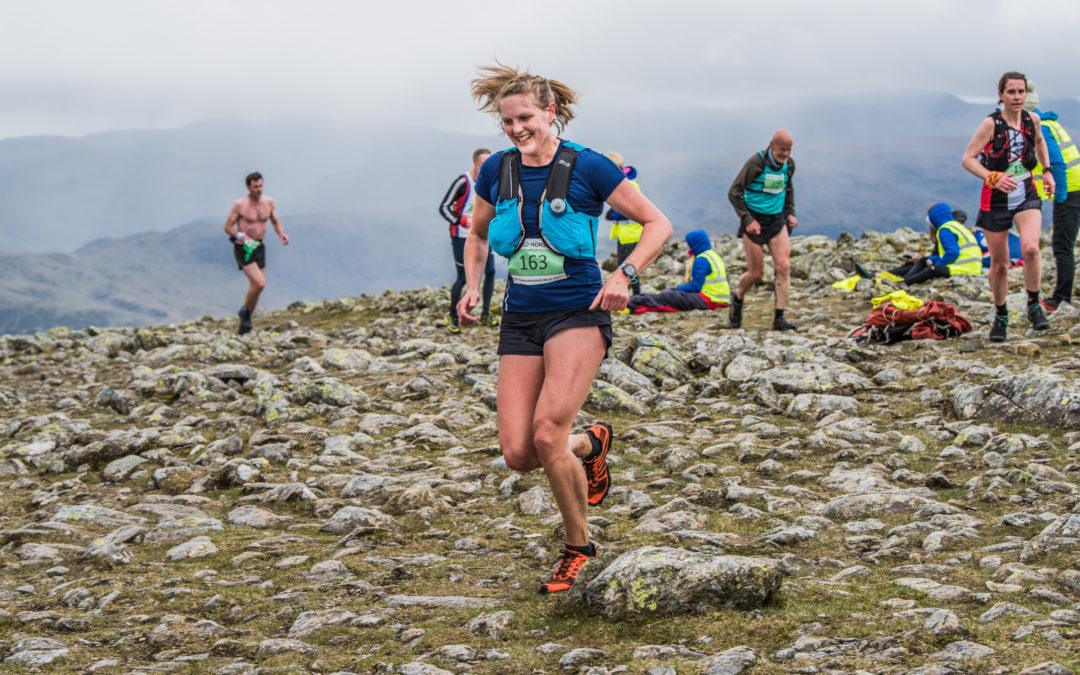 Three U20 Blackburn Harriers entered the Leigh BMC Meeting – Ben Makin and Jamie Teare both taking on the 1500m and Matt Ramsden in the 3000m. The Leigh Track is quite open and exposed and when the wind blows it does have an impact on races as it did on the day.

Ben Makin was first up in the 1500m A Race which followed hard on the heels of his new PB over 800m (1.57.68) at Trafford five days earlier.  Nine athletes in the race including four U20’s and five U17’s. Ben had already had one race at 1500m on April 24th where he set himself a new personal best of 4.03.55 in winning at a Trafford Senior Open Meeting and that form was cemented here at Leigh as he won again – his third win in four races this season – in a new PB time of 3.58.74, a further improvement by close to five seconds. Speaking to the Harriers after his race Ben told us that he was “Happy to take a win in my first BMC race, went out really well with the pacemaker but due to some bad windy conditions it made it hard to run solo as I was for a lot of the race, still nice to break 4 minutes but know there is a lot more to take off by the end of the season guaranteed.“

Jamie Teare last put on his track spikes in September 2020 – his only track race since may 2019 – where he posted a 1500m time of 4.13.3. Training has been going well for him and it certainly showed in his performance, winning his race by some nine seconds and setting a new PB of 4.02.24, which represented an eleven second improvement. Another delighted Blackburn Harrier told us that it was a “Great season opener with an 11 second pb. Slightly unfortunate with the conditions as there was a strong headwind on the home straight but still good to see everyone run quick times!”

Matt Ramsden is also in very good form which was demonstrated five days ago when placing 4th in the 3000m at Trafford with a new personal best of 8.33.55. On windy days, the longer the races can be badly impacted. However, that didn’t stop Matt producing another very good run and performance as he placed second in a time of 8.39.51 in the A Race, which was won by Wirral’s  T J Jones (8.37.35) with Kendal’s Fraser Sproul in 3rd spot (8.42.17). Matt had been looking forward to doing a BMC Race as he told us afterwards “it was great to finally do a BMC race and I was happy with my performance especially in those conditions. The wind couldn’t decide what direction to go in but it was still an enjoyable race.“

Still on the Track U20 Joe Gebbie who has gone through some injuries of late, entered the Leeds BMC Meeting on May 20th to test how rehabilitation was going. Again the weather wasn’t kind to the athletes, nevertheless, Joe had a very good run, only his second track race of the year, as he clocked 2.00.24 in 3rd spot, the race being won by Rothwell’s William Randall (1.59.34) with Ashford AC athlete Harrison Tremaine in 2nd (1.59.43). Afterwards, Joe spoke about how the night had gone, saying “Pleased to be in the right ballpark for that 800m opener in some grim conditions. Felt really strong though to 600m, and then I remembered what lactic does to you. Not had much speed training in recently so ready to start building it back up and hopefully be hitting PBs soon!”

On the Road, it was another multi-tiered race day with Runthrough putting on simultaneous 5k, 10k and Half-Marathon Races in Heaton Park. The author of this report can remember running a 10k in Heaton Park which came as a big surprise, as he went into the race believing that because it was a park, it would be flat! Ben Fish & Chris Davies in the 10k and Oliver Gill in the 5k, all raced on the day. 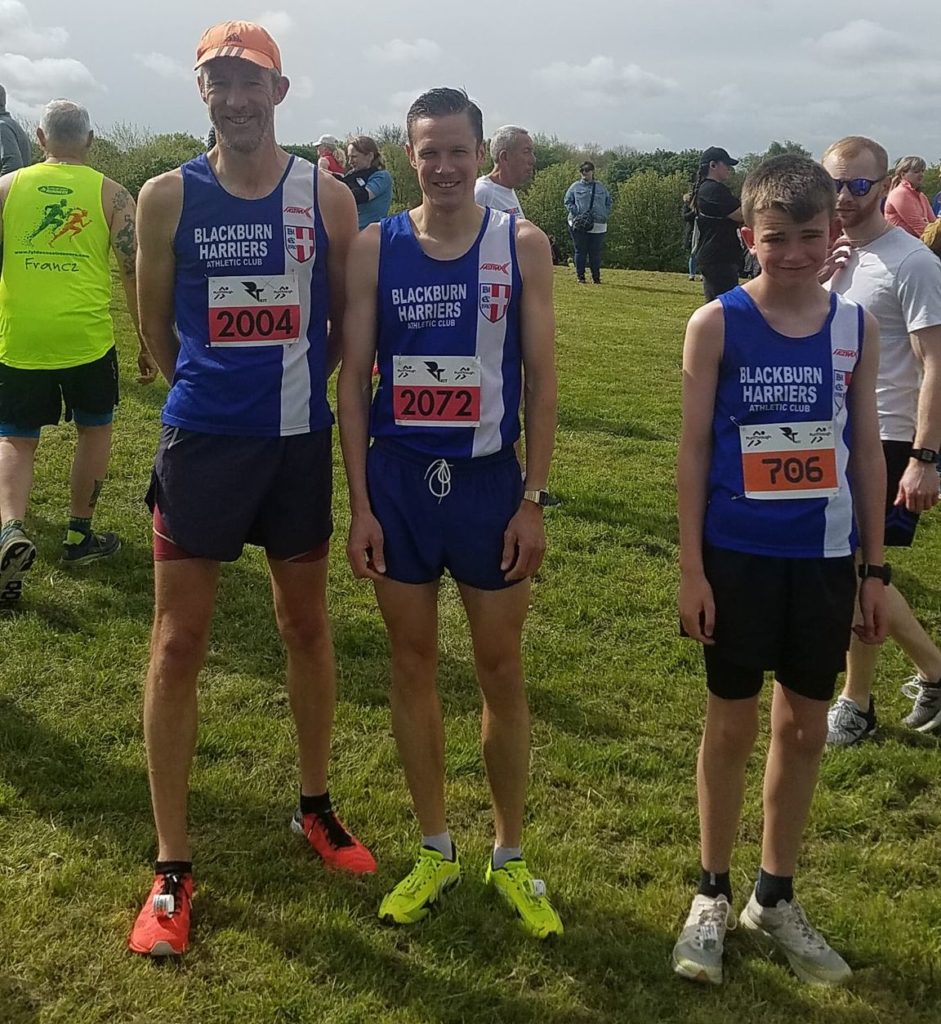 Thanks to Keith Gill for the photos

On a windy day three hundred and seven runners finished the 10k Race which was won by Ben Fish in a time of 32.44 with Steel City Striders Philip Cooper in 2nd (35.10) and Sale Harriers Matt Spragg in 3rd (35.40). Ben spoke to the Club afterwards commenting that he had  “entered after the track meet was cancelled. Knew it wouldn’t be fast but glad to get a race in after the marathon a few weeks ago. Tough course but enjoyable. Chris had a good run, bodes well for the summer.“ 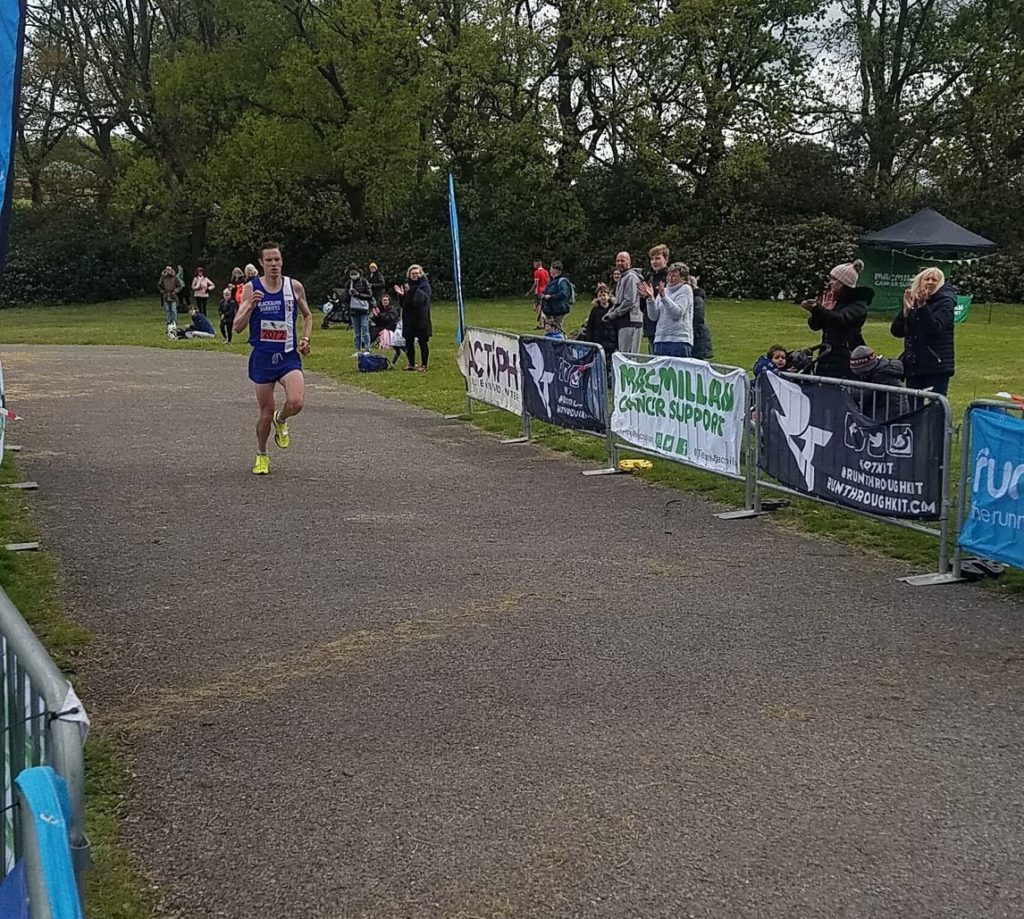 Chris Davies was running his first race in over a year – the last time in February 2020 in a cross country race in Blackpool. He had a good run, placing 7th overall and 1st V40 with a time of 36.05 and commented after the race “After 15 months of no races and just having to train it was a great feeling to get on a start line again wearing the blue and white with a number on the front of my vest. I went into the race with a target of 36:00 to 36:30. I new the course would be tough, it is a very hilly course and being a 2 lap race the main climb was always going to be tough second time round. It was a shock to the system to be racing again but really happy to be out their racing again. I achieved 36:05 so my goal for the day was accomplished. On a flatter course I feel I would have been good for a low 35:00, maybe just under. One race under my belt though, plenty more to come hopefully and today was a good bench mark“. 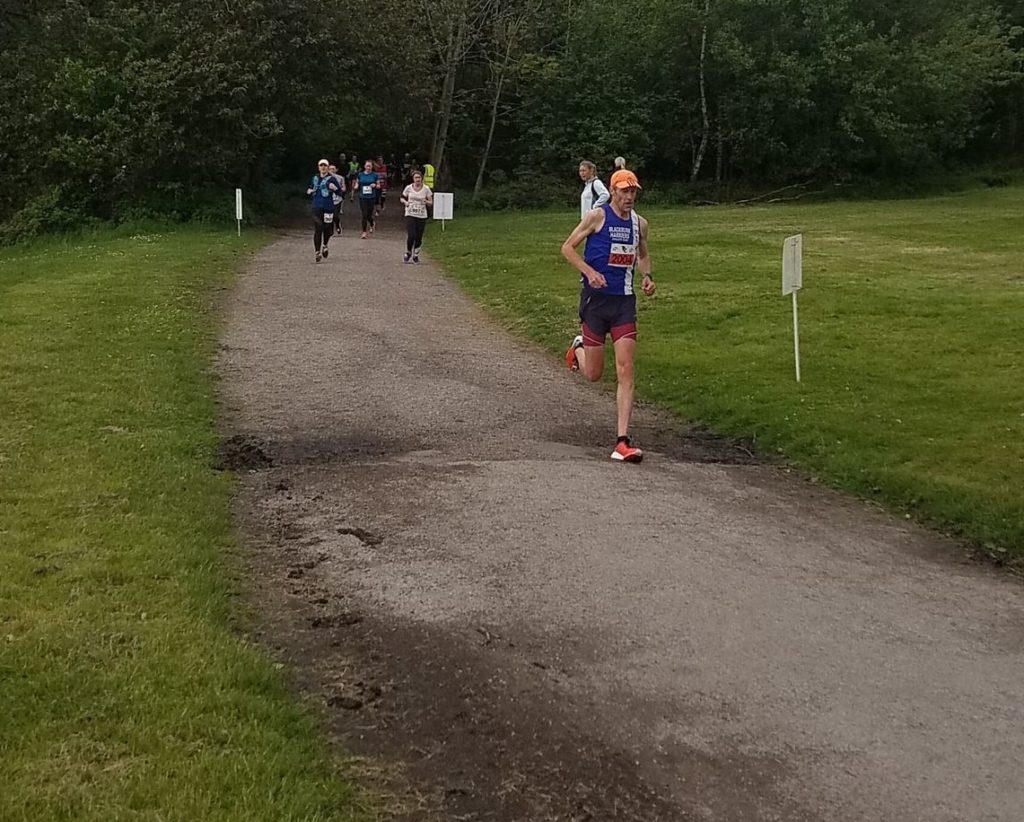 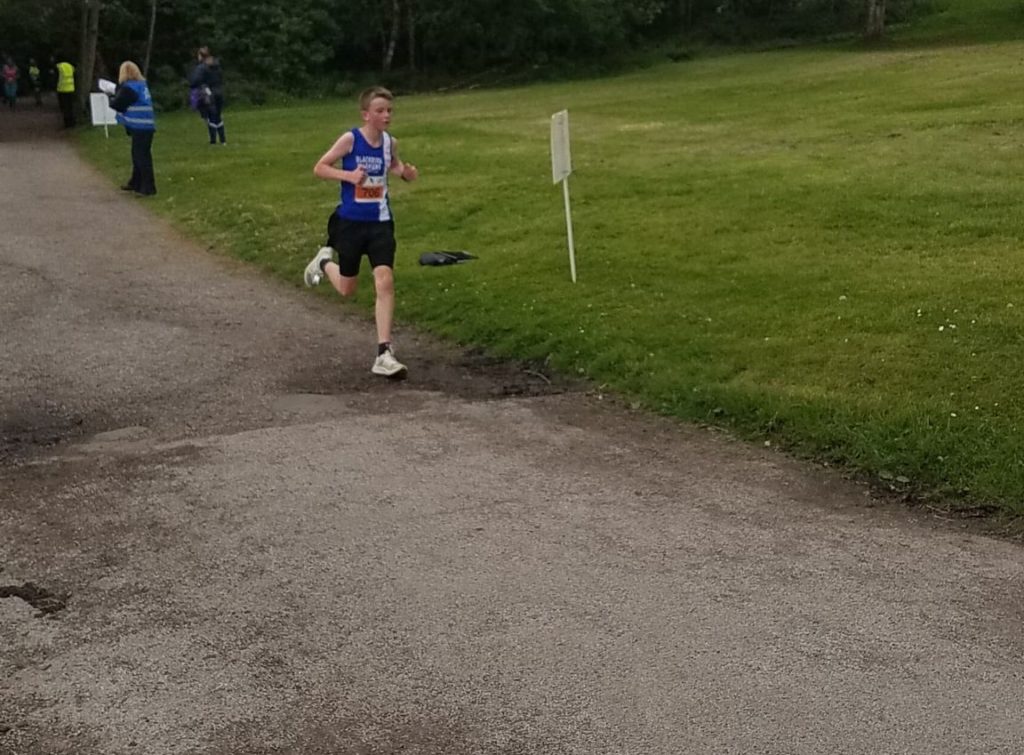 On to the Fells at the Fairfield Horseshoe on May 22nd featuring two hundred and sixteen finishers in a race won by Keswick’s Jacob Adlin (74.45) with another Keswick athlete Bennan Townshend in 2nd (79.46) and Pudsey & Bramley’s Joe Baxter in 3rd (81.00).

Three Blackburn Harriers in this one – John Horrocks, Helen Leigh and Calvin Ferguson. John has only run a couple of Park Runs since December 2019, so he couldn’t have picked a tougher comeback race than this and ran well to come home in 51st place in a time of 1hr 42.03. Helen Leigh, well what can you say? She ran a 5k in July 2018, that being her only race since October 2016. If ever an athlete deserved kudos and respect for what she has been through, Helen fits the bill. Today she came home in 88th place, was 8th Woman and ran a time of 1hr 51.53 and afterwards, speaking to the Club, her enthusiasm, as ever, shone through when she told us “First race in FOREVER! Was so amazing to be racing. After a few months consistent running I smashed my ankle to smithereens in Feb. I was worried about turning it again but it didn’t let me down and I was back descending like a nutter taking 4 female places on the descent to finish 8th. I’m a way off way off race fit but my body held out and I worked my backside off and loved it “

Calvin Ferguson was the third member of the Harriers in the Race and was racing the day after his second Covid vaccination which impacted on his Race, leading to him not finishing. Reflecting on his decision to race, Calving explained that he had “entered the race a few weeks back with the aim of using it as a training run in part of my fitness rebuild that’s currently taking place. I’ve felt stronger in training recently and felt confident I would enjoy the run out with an aim of finishing under a moderate time of 2:15. It was also my first Lakeland fell race since joining the Harriers back in September 2019 and only my third race overall, so I was really looking forward to it. The night before I had my second COVID jab and that seemed to put a stop to me enjoying the race. I felt fine warming up, felt okay at a steady effort for the first 2 miles but then I could feel my body just wasn’t up to it at all – I got to Fairfield after walking a considerable distance beforehand and told the summit marshals I was dropping out from there, jogging/walking the rest of the route to the finish with not much energy left. Nothing lost though and I’m looking forward to continuing my training this week. Well done to John & Helen for great runs on the day“ 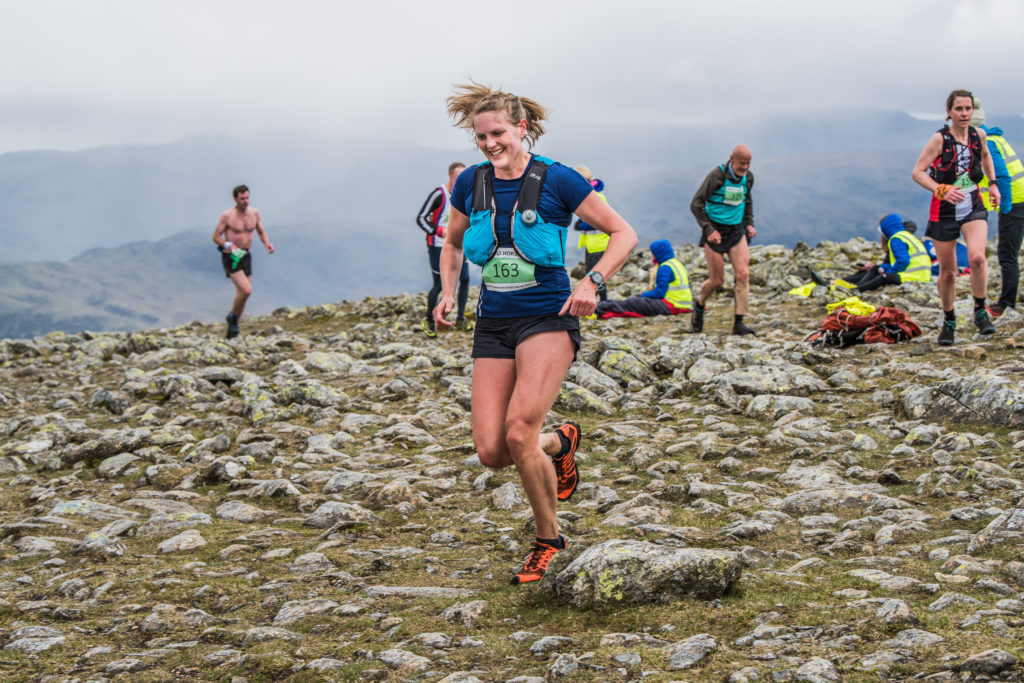 Blackstone Edge is a category AS Fell Race, covering 5.6km with 366m climb. Harry Wilkin decided after racing over 1500m at Trafford on Tuesday and setting a new personal best, to do something completely different and take on a five kilometre Fell Race along with his dad, Mark Wilkin and making it a trio of Blackburn Harriers, Josh Holgate.

Thanks to Clare Wilkin for the photos 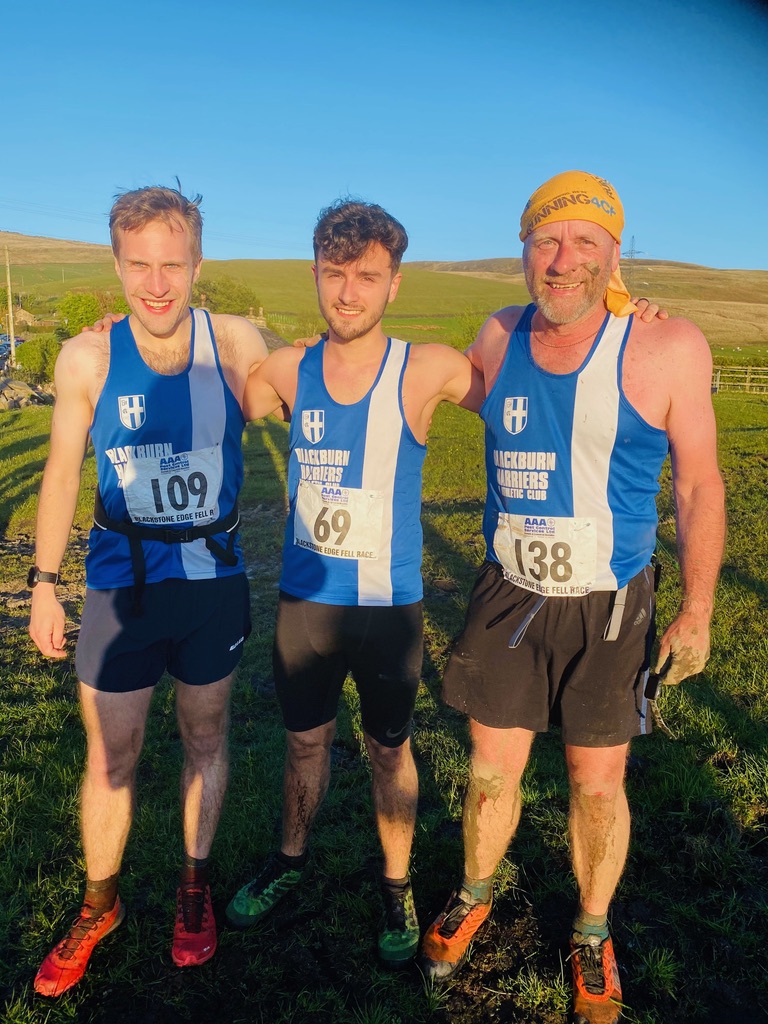 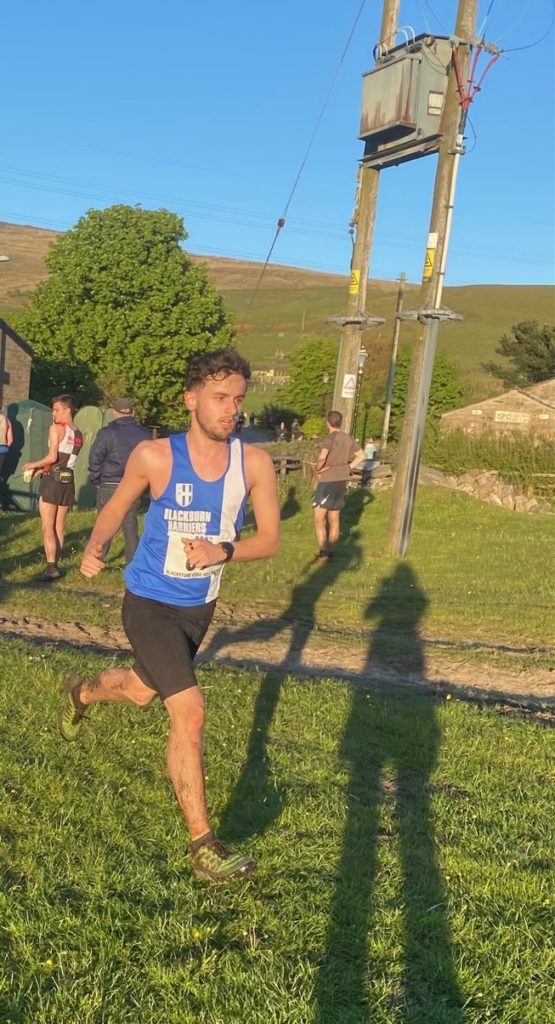 U15 Matthew Smith has been competing very well this year. Currently lying in 2nd place in the National Rankings for High Jump with 1.70m and with an aspiration for combined events. This last weekend, he made his debut in the Triathlon at St Annes as a bottom of age in the T3 Group. This involved a 300m Swim, 8k Bike Ride and a 2.4k Run. in which he placed 6th out of the 18 in his category and a very solid performance.
Triathlon RESULTS 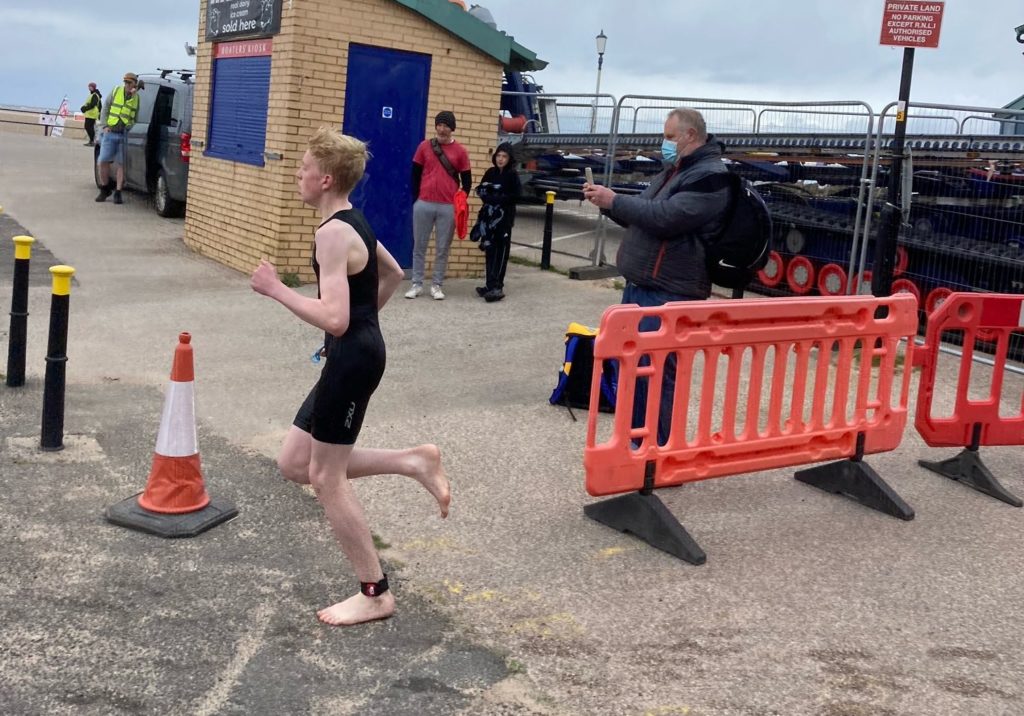 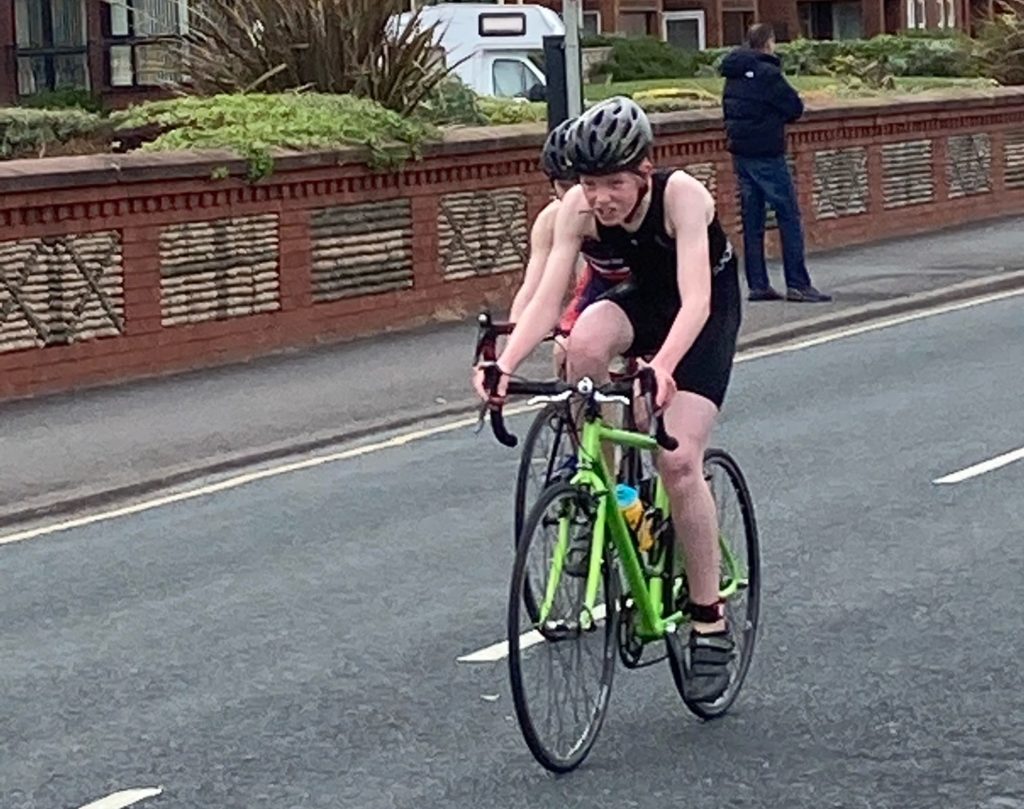 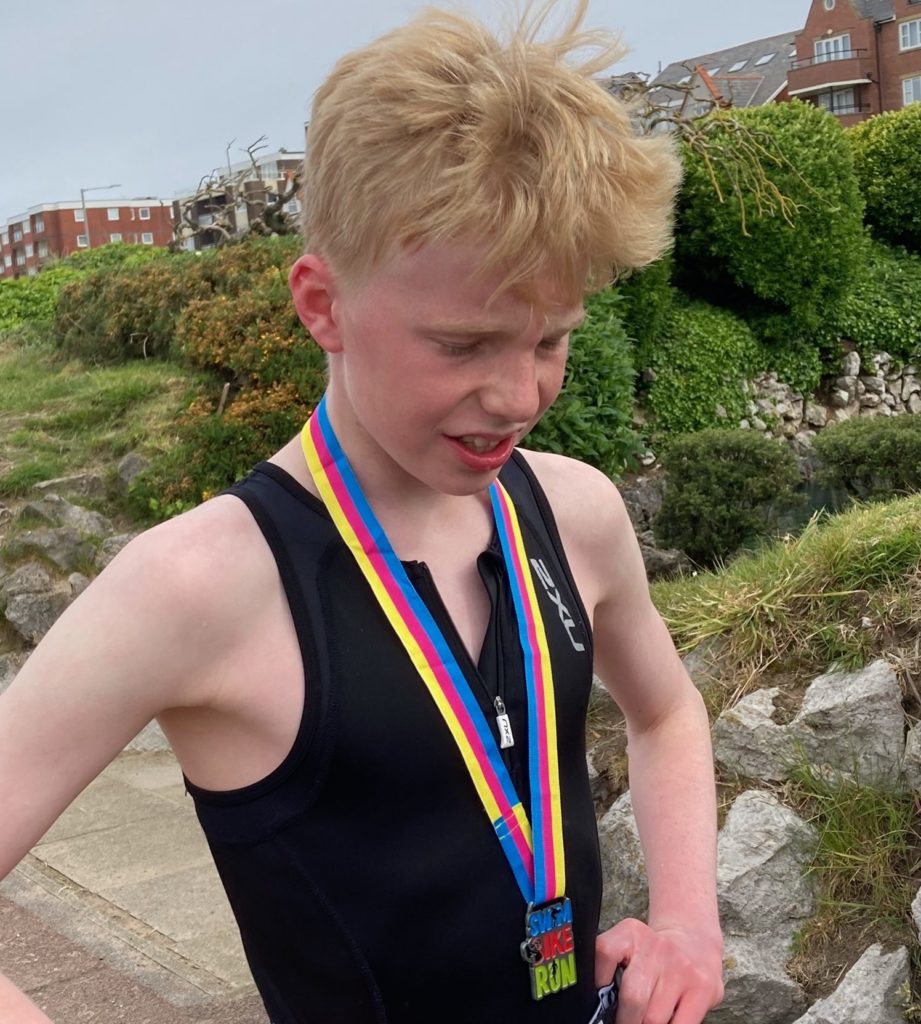